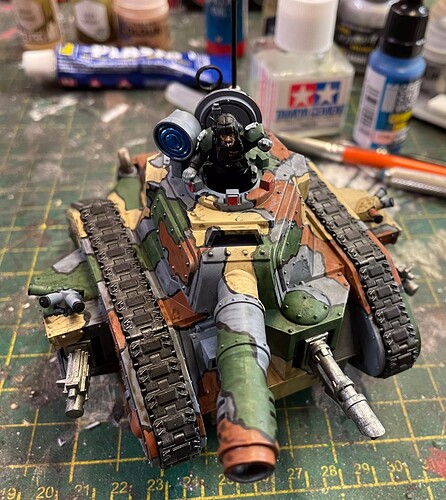 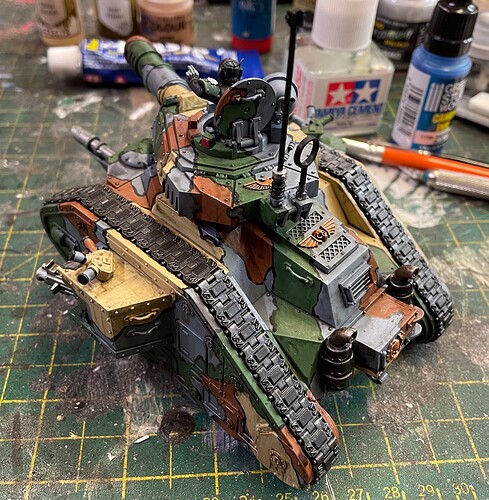 It does kind of have that WW1 look to it, that tank, so it works quite nicely with that camo!

these miniatures are very addictive, i too have been working on some during the festive period and i eill post so pictures soon.

Thanks Karl, only another 3 of these to do in this camo then I’m switching to WWI British camo for another 3 and WWI German for the artillery.

Yes David they are addictive, I’m sad to say though that this tank has been sitting built on the shelf for about 6 months then last week I decided it was time to get it painted, not over Christmas/New Year as I was working as per normal. Just ordered some tank decals so I can get it and it’s squadron mates when built marked up (Spanish Leo 2 markings!!!)

But now you have the Rogal Dorn Tank to include in the mix…
https://www.warhammer-community.com/2022/12/19/designing-the-new-rogal-dorn-tank-chatting-tracks-turrets-and-tension-springs-with-the-warhammer-design-studio/
Back in the day when I was contemplating a non-tournament IG(AM) force I acquired a couple of 1:48th scale KV-2 tanks^ to convert to Ragnaroks as a “counts as” drop-in Leman Russ replacements as they were cheaper than and dimensionally almost identical to the GW product. Given the Ragnarok originated on Kreig it’s not unlikely they would still have some in reserve…

^ Specifically, the Hobby Boss German Pz.Kpfw 754(r), at the time on offer for less than a tenner, still less than twenty quid. I can find no entry on the GW site for the Leman Russ tank so it may be OOP awaiting a new model up to the standards of the new AM models such as the recently released Sentinel (I saw this, and some towed artillery/heavy weapons in use on the table last Friday).