Is this produced by any decal producer or will i be making my own?

Paul, if that’s meant to be the NATO map marking symbol for an armoured infantry unit it’s a bit off: 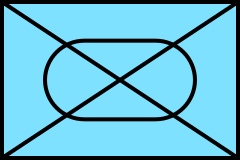 If you want to use it as a vehicle marking such as the Bundeswehr (and others use) then there are several decal manufacturers around that make them:

I’m sure there are others; if on the other hand I’ve misunderstood your intent then forgive me!

NATO Military Symbols for Land Based Systems was the NATO standard for military map marking symbols. It was published as Allied Procedural Publication 6A (APP-6A). The symbols are designed to enhance NATO’s joint interoperability by providing a...

Ah, good old APP-6. Those were the days – this arcane subject used to be confined to useage by Staff Officers and the Intelligence Corps (not surprisingly perhaps). However, within formation HQs, that is Brigade and above, the species known as Staff Clerks RAOC also dwelt, and proved surprisingly adept at mastering the subject of map marking. Indeed, back in the day (dear God how many times have I begun to bore people with those 3 words?) we used to mark maps using Chinagraph wax pencils; all was colour coded (and may still be now), red for enemy, blue for own forces, green for engineer activity – demolitions, bridges, minefield etc, yellow for chemically contaminated areas, including those areas irradiated by nuclear weapons. As the maps were often covered in Perspex and illuminated by fluorescent lights, the result was that the Chinagraphed images also appeared, well, fluorescent. So, essentially, one had to master nearly all symbols and the abbreviations and unit size criteria that accompanied them. It also required a speed and accuracy as battles were often fast moving. We used plastic templates that some enterprising manufacturer made, but these essential items were never issued. Activity wasn’t just confined to the one map, other Staff cells also required updating including the Commander’s. So, the Staff Clerks RAOC within a Brigade, Division or Corps HQ were kept very much up to the mark. Accuracy in the symbology and map reading were essential; after all, such information (on the map) was used to plan nuclear strikes. Additionally, traces (that is transparent plastic sheets with map details on them) were also constantly required; this all took a fearsome amount of time in addition to other clerical duties in the field such as the typing and distribution of operation orders and the like, oh, and making tea for the officers (!)

Chinagraphs were replaced with Lumocolors made by the German firm Staedtler, and the fluorescent effect was lost; overall they were easier to use but a danger was that permanent and non-permanent pens could, as fatigue took hold, be mixed with the obvious dire results; try explaining to a Divisional Commander why the units shown on his map are incorrect at 0200hrs in the morning because they can’t be erased!

I even, in a different epoch, ended up instructing in map marking and some of the aides to memory were quite quaint such as the symbol for Infantry replicating the cross straps of personal equipment, the rhomboid shape of a WW1 tank mutated into a squashed ellipse to identify an armoured unit, a cannonball for Artillery and so on and so forth.

All of this a long, long way from Paul’s request, but mention of APP-6 just got the better of me! And of course, I believe it was the Bundeswehr who first utilised the symbols on their vehicles to enable identification – only of course, to those who knew. I can’t imagine that the GRU were foxed for long.

That’s the one Robin.