I don’t know about searching but what I have done is see some work someone is working on and click on there username, that will list the number of times they have posted in the thread on the right hand side of the screen. You can then scroll through those posts. You have posted twice so far as have I.

I don’t know about searching but what I have done is see some work someone is working on and click on there username, that will list the number of times they have posted in the thread on the right hand side of the screen. You can then scroll through those posts.

Well there you go, that’s exactly the function I was talking about! I’ve just tried it out on a couple of the AutoModeler threads and it works great. Thanks for the tip Ryan!

@Joel_W , this should solve your problem my friend!

D & Ryan,
that is one solution , but it’s rather time consuming as it only lists the number of times that person has posted within the GB. I just checked Luciano in the Heart of the Beast, and he’s posted 7 times. I’d still have to scroll through the pages to find what I’m looking for, or from the very start to read through the build to date.

What other sites have is within a GB everyone can open up their own thread. That makes much better sense, as it’s quicker, easier, and doesn’t require searching every time you need to go to a specific item or point.

Joel, if you click on the box where it tells you how many posts the person has made, it then hides all of the other posts so you can just scroll through that particular user’s posts in that specific thread.

As D said click on the number of post and you will only see that posters posts.

What other sites have is within a GB everyone can open up their own thread. That makes much better sense, as it’s quicker, easier, and doesn’t require searching every time you need to go to a specific item or point.

That is another option and similar to kinda what Jim was talking about if I understood what he was saying which I confess sometimes I don’t understand.

Guys, as I said, this function is way to cumbersome to work for GB’s that have gone on for months trying to follow a person or persons build. This has always been one of the main reasons why Campaigns/GBs don’t get very many non members stopping by.

As an example I just went to the the Dreams are Free GB that just finished, and clicked on my avatar. I had 170 total posts. Those include my build, and all my other GB related posts. So I would have to scroll through every post till I got to ones relating to my build. Way to time consuming.

What I usually do is both post in the GB and have a separate Build Blog in the Cars forum which gets a decent amount of views. But again, it’s more work to keep it current.

I’m thinking that for the new GB to just make a simple post with a pic or two that I’ve updated my build thread in the main car forum and post the link to it.

@Joel_W , Basically do a build thread when participating in a Campaign/GB and post the link and a couple of pictures to the main Campaign/GB thread for the update? That seems pretty doable.

Regarding Campaign/GB timeliness, what’s been found to be most effective in promoting participation and completion in the past?

Campaign/GB’s on the internet are new to me and so prospective is missing.

Wade,
As far as promoting Campaigns/GBs since the move to the new site, it’s mostly done as a discussion thread within each separate site.

On AutoModeler we start off months in advance with a proposal thread and everyone that’s interested just chimes in. As far as themes go, we do basically the same thing a year or so in advance.

As far as the separate build blog, that’s exactly how I’m going to approach the new GB along with just a few pics and the link rather then post the update, then copy and paste to the build blog.

@Joel_W , Basically do a build thread when participating in a Campaign/GB and post the link and a couple of pictures to the main Campaign/GB thread for the update? That seems pretty doable.

This is my preferred solution, and what I have done so far. I join the group build, then create a separate thread to post updates on the build, and just link it back into the Campaign (both ways).

I think that would be a great suggested practice for all group builds. You could quickly see all the projects being built, and drill into those that interest you.

Here is my completed K2S0 from Bandai. Great kit, as most Bandai kits are. If you are interested in build details, I wrote them up here: [DSCN9995] [DSCN9996]

I have the Template and badge topics finished. What remains is to determine the final structure for the topics related to a campaign. The solution I want to pursue isn’t really viable though due to the sheer number of campaigns we run and how that would display on the forum homepage. I am waiting to hear back from the Discourse folks to see if there is some other option open.

Below that, an entry for Current builds, and in that area a entry for each build: 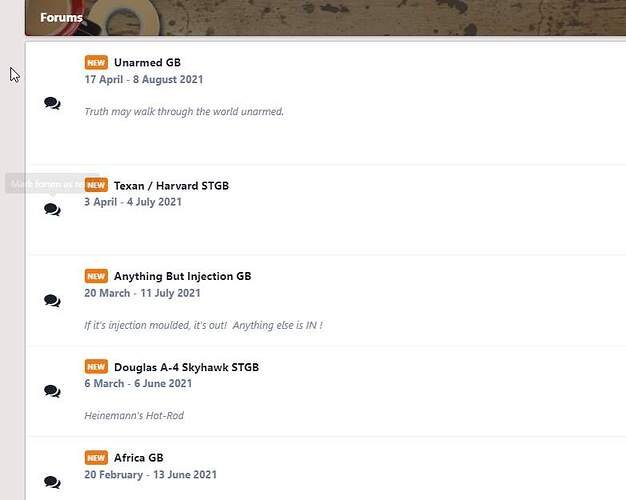 image783×625 25.9 KB
In each build area a main entry where you can chat, an end gallery, and for each builder his/her own thread… 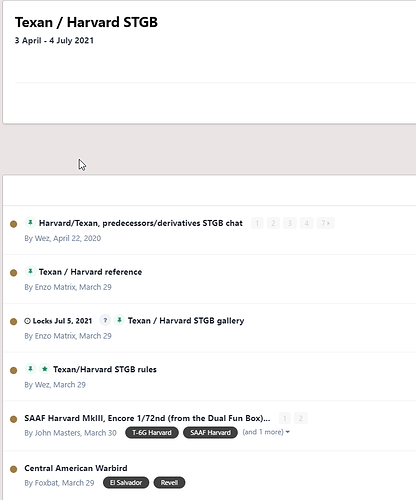 But Erwin… you’re not British.

Yeah I had seen that example. Which is one of the reasons I would like to at least try them as separate forums. The problem is that we have had 30+ active group builds going on so that is a lot of sub-forums. to display here.

I mean… we can try it on the next group build to form and see how it goes.

No, I know… I was also stunned thet let me in, though it was Pre-Brexit I applied

Come to think of it, part of me is though: my great grandfather was a Brit…

They also have the advantage of seemingly unlimited nested forums though. Something we do not as the developers of Discourse think that is bad.

How many levels does Discourse allow?

Tbf though they have tags (and groups) which is another way around some of that. I have looked at using groups but it would make them harder to find and you’d still need a forum to post group discussions in.

Oeh, that indeed is not too many

Believe it or not some of the most popular Discourse sites don’t even use sub-forum/categories. They just have one parent set of cats with no children. Crazy eh?

Those must be not very interesting, or with a single subject . At least not with the diversity Kitmaker has…