I am reaching out on limb on this but I am looking for a M3 37mm ATG in 1/48 I want to use with my Merit Elco '80 foot torpedo boat (early) ? Want to do PT-109. I thought posting on Armorama might be the most logical place to post. I know of the Bandai kit and have been watching for it to show up somewhere but when they do show up they are rather expensive. I started lurking around 3D printing sites and found this on Shapeways but was looking for something less toy-like.

If anyone would know, this place would be my best chance.

The only one I know of in plastic is the vintage Bandai kit. Check Ebay, as they
periodically show up.
Cheers,

Here it is on scalemates. 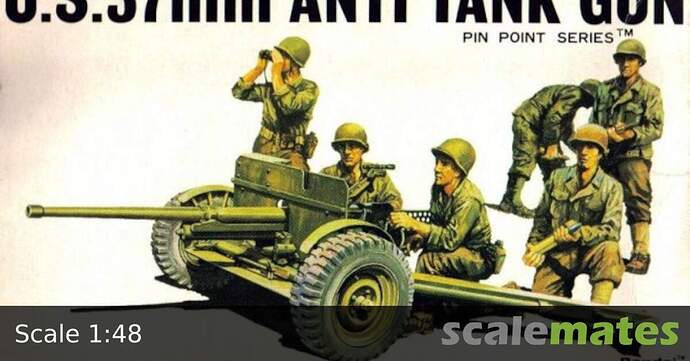 I started lurking around 3D printing sites and found this on Shapeways but was looking for something less toy-like.

Yeah, I’ve got a 1/48 105mm Howitzer pencil sharpener that looks better than that.

The Bandai kit is very basic and a bit clunky, but it is still better than that printed one! I might still have one laying around.
Ken

Thanks all for the responses. I had a feeling I am stuck with lurking on ebay (and others) for the Bandai kit. Was hoping some obscure manufacturer that I never heard of made one and someone here on the forum would know and found it.

When you first posted, I looked up the Gaso.line manufacturer site as they
specialize in 1:48 kits but came up empty…they only make a US 57mm cannon.
Keep an eye out for the BANDAI as they do come up now and then.
There is also WESPE models out of Romania but unfortunately, no 37mm.
Come to think of it, there is the Bolt Action offering but that is 28mm or 1/56 scale.
https://www.greathobbies.com/productinfo/?prod_id=WLGWGBAI32

That Bolt Action one actually looks pretty good. The only question is whether it would fit on your boat, it is a bit undersize. On the other hand, I have found that the Bandai kits run a bit under scale too, and like I said before, it is a bit clunky. But I dug around, and I do have one.
Ken

That is a clever idea. Never thought about checking Bolt Action. I actually have some of the rule books and even own their Tiger I (late). I may need to rummage through my stash and find my Skybow 1/48 Tiger I (late) and compare the sizes. I have mixed 1/72 and 1/76 and even 1/32 and 1/35 stuff together in the past and managed to live with it.

PM me with what it will take you to part with it. I have seen the $$ on ebay so don’t sticker shock me

I will be only using the gun minus the wheels and not touching the figures.

A happy ending. Thanks a ton Tankerken. My PT boat has a gun 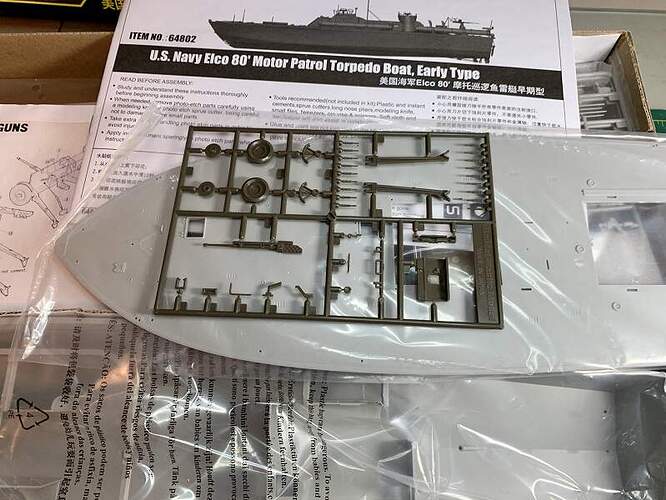 Many Cheers and again thanks

That is great news…looking forward to seeing this built.
By the way, does this kit come with any crew figures?
Cheers,

Here it is on Armorama.

No figures. From what I have gathered it is a copy of the Italeri 1/35 kit but in 1/48. But not 100% sure since I don’t have the Italeri kit to compare. The Italeri kit does come with the 37mm AT gun though. As for when I build it, like the other 650+ kits in the stash, it is queued up.

Could be. However, Italeri got the kit from Peerless Max. I have it somewhere so if I get the time, I’ll compare them. Checking Scalemates, they state both Peerless and Bandai released their 37mm in 1974. But I doubt Bandai copied Peerless simply because Bandai was cranking out a bunch of original kits, as was Peerless Max. I am curious to know, though.