I built this for a Group Build project with So. Cal. AMPS. Our chapter is making the whole Patton tank family. This is the Dragon M46 kit in the markings of 6th Tank Battalion during Operation Ripper in Korea, Spring 1951.These are probably the most colorful unit markings worn in combat by any tank unit. I modified the kit by repositioning some turret external fittings, leaving off the turret right side stowage rack, adding some turret grab rails, a left side stowage rack on the fender, and a .30 cal. Browning based upon photos of the units tanks in Korea. Paints used are Mission Models and Humbrol for the main colors. Stowage items are from my stash and spares bin. 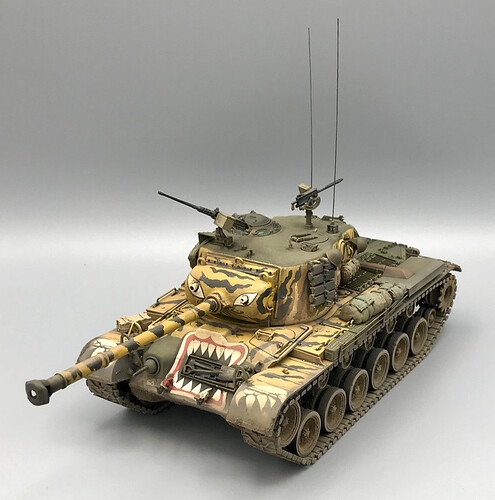 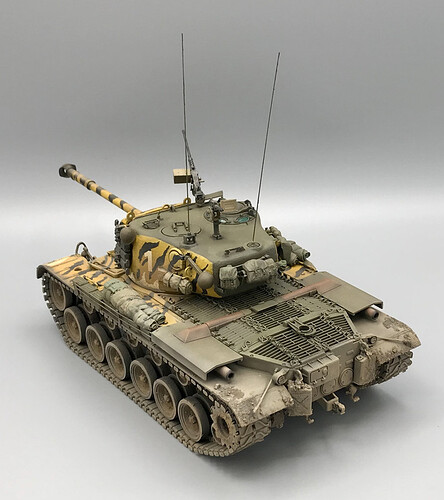 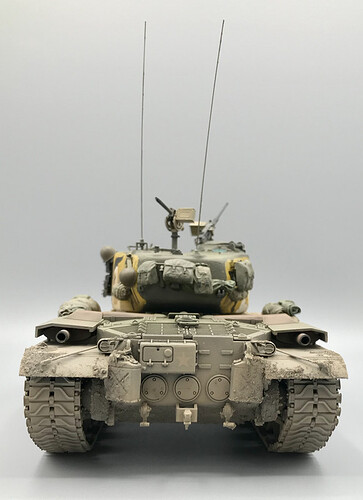 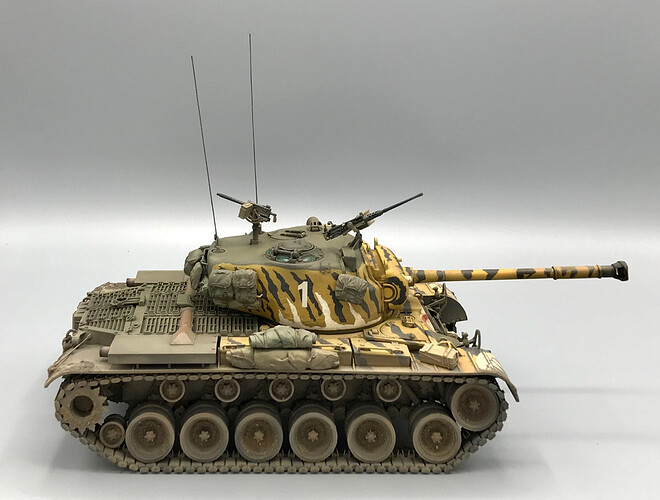 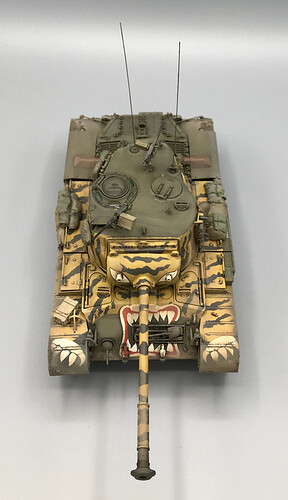 I still need to finish the TC figure and come up with a base for this one.

Comments and critiques are welcome.

I’d be willing to say no other tank is better suited to wear the paint scheme of a lungeing tiger. You have done a splendid job with this model. I wish I were better educated about the “forgotten” war in Korea. Thanks for posting this one.

Well done. I have also built this kit. I was a bit hesitant about doing the stripes by hand as I am a bit heavy handed with a brush but I took the plunge and was please with the result.

Agin’ & Armor, thanks for your kind words!
Agin’, the Korean War is definitely and interesting subject to read about. Especially the first year when both sides were going at it and it not yet become static.
Armor, I was with you about painting those stripes by hand. But once I started and was going a bit, I had that “oh yeah” moment when I saw that they were gonna turn out right.

Fantastic work! I have Cyber hobbys (Dragon) on the bench right now.

That’s a stunner of a build, Stik. The hand painted tiger stripes and the weathering are both outstanding.

Absolutely fantastic. One of the best renditions I’ve seen of the species; I have this one in my stash but always wished to portray it as in Europe, but does anyone know if it ever went to Europe? I have posted this question before but I think the jury were out. Any new info more than welcome.

However, that’s an aside; Carlos, this really is an excellent model, and how nice to see antennae which sadly (in my opinion), not all modellers depict. Weathering too is very well done and somewhat akin to my own methodology (though probably better depicted!).

Thank you guys. I am very happy that this build is well received here.

@Spearhead01, check your reference photos for whatever tank/unit that you plan to build. There was variations in turret fittings, and the kit needs modification in that regards in many cases.

@disorderly, the weathering and stripes were the most fun parts of painting/finishing! How often do we get to build such a gaudy scheme?

@BootsDMS, from what I can find, only Belgium received a handful of M46s for transition training before they received their M47s. It appears that most M46s were either stateside in the US or sent to the Korean War.
I agree about antennas. How else are the beasts gonna talk to each other? It’s one of those small touches that adds a lot to final appearance. Weathering is fun too. Once I learned the basic technique that I used here from a guy at AMPS, I modified it a bit to add more “life” and texture. Military vehicles get muddy, dirty, dusty, or all of the above. A clean one is in the motor pool, on parade, or doing something other than it’s main job, training or fighting.

Hey stik , another beautiful finish ! Great paint job especially and weathering is awesome. Can you explain how you do your weathering and do you do washes ?

Thank you Richard. So my weathering did include washes. I use artist oils, Burnt Umber in this case, to do a pin wash around all details. After the wash was a flat coat. Next I did dry brushing with Humbrol Enamels selected to highlight each color, but not too starkly.
On the suspension area everything was black to start. Then I airbrush on a heavy coat of Model Master Burnt Umber. The next step is my own addition to the technique that I learned at AMPS. I diluted some white glue and brushed it onto the running gear wheel faces and selected area of the hull sides, as well as on selected areas of the fenders, then sprinkled on finely sifted dirt for texture. I blew off the excess and allowed it to dry. Some areas received more treatment for heavier buildup. After that had dried, I airbrushed on a thinner coat of Model Master Raw Sienna. Lastly was an overall thinner coat of Model Master Concrete, a color from their Railroad line, for dust over the suspension, frontal, and horizontal surfaces where dust typically builds up.

Aside from the sifted dirt addition, it’s a very quick technique. 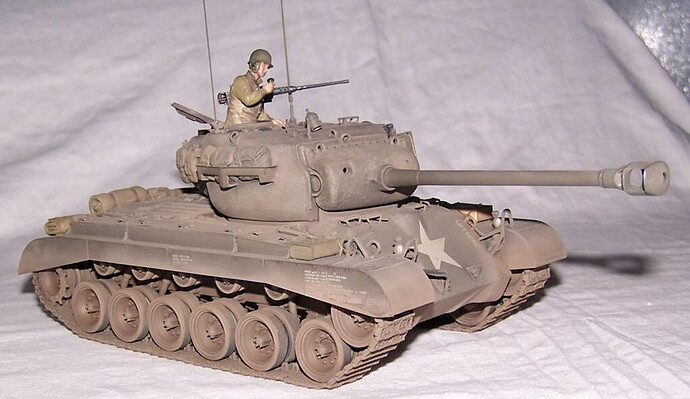 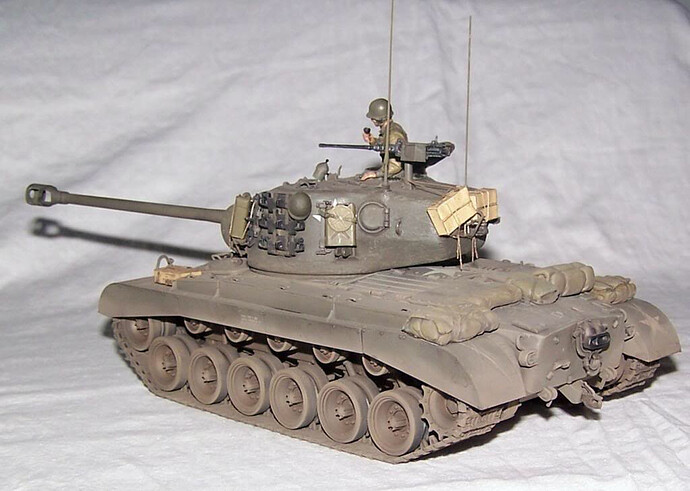 we had a brand new M46 tank at work. Never been outside except for delivery. Never been wet, and was started up about once a year. We sent it down to Ft. Knox about a year before the closed shop. I can remember climbing on it when I was a kid.

That’s a great technique stik, it really looks excellent gotta try that on my next build. I recently discovered the Mig enamel washes right out of the jar. I am still working on an M1 Panther mine clearance vehicle, when it’s done I’ll post pics. I used it as a test bed so to speak to try new products. I’m still kinda old school with oil washes and such but looking for other alternatives. The Mig products are excellent.

Thanks Richard. I look forward to seeing your M1 Panther Build here. I hear ya about about being old school. I’ve tried the Mig enamel wash stuff on aircraft. It’s good stuff, but I do like the longer clean up time available with oil washes.

@Gary_Totty, that would have been cool climbing on a M46 as a youngster. I never had a chance to climb onto or into a tank until I went thru Ft. Benning long ago. They had a M48 and T55 parked by one another for us young Privates.

Yes the oils can be blended for a while after they are in place.

You may have heard this story before, but trust me it’s true. I think I road on the back of a 48 twice, and never felt comfortable. Says a lot for the Soviet tank riders! We the kid misses his chopper ride and grew quit tired of waiting and waiting with two full duffle bags of hooch. Sets out walking towards Five Four up by Fat City. Figured we’d get a flight out of there headed west. A group in a 48 stops and offers a ride. Why Not! Asked where I was headed, and I told them I needed to get to Thien Phouc before the sun sets. Then asked me what’s in the duffle bags? I knew the cat was outta the bag, so I hand over a virgin bottle of Jim Beam. Boy is everybody happy and they offer to take me to T.P. No way I’m riding on that thing thru the hook!!! About this time I came to realize that I was the only sober person there. This tank is taking up all of Highway One, and sending Vespas into the rice paddies left and right. Oh well; beats walking anyway. As we got up by Tam Key they beg for another bottle, and like an idiot I give them one. We decide to goto Hawk Hill as that’s where they were headed anyway. Lots of choppers there. Then they turn on this ghetto blaster that still is the biggest I’ve ever seen to this day. Plays one song; Suzie Que over and over. That’s when I see Suzie Que painted on the barrel. Nice touch! We roll into Hawk Hill and almost clipped a loaded four hole outhouse. Decide that maybe my ride is done for my own sake. I head over to the chopper pad while these guys decide they need to visit the beer hall. They won’t let them in (I honestly think it was because they were black), and that even rubbed me wrong! Then I look over there and see the 90mm barrel going thru the front door. They drove the tank thru the front door and out the back with the roof hanging on the top. I had a chopper pilot a bottle of rum and beg him to take me home! Fifteen minutes later I’m home and Top is standing there! Not at all a good sign. He asked me about a trip up Highway One and creating all kinds of havoc. “I know nothing!” Then asked me about wrecking a tank, and said the samething again. Later I tell him what I thought happened and he said good for them. Doubt seriously they did a thing to them as these guys were from Alpha First of the First CAV, and right out of the bush. Nothing but bad experiences when I rode on a track! Rather just get off and walk.
gary 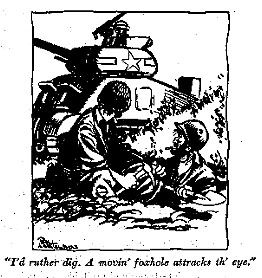 @Stikpusher Thanks for the advice