Searching the web for cammo options to paint a King Tiger, I found this scheme from a Dragon Armor kit 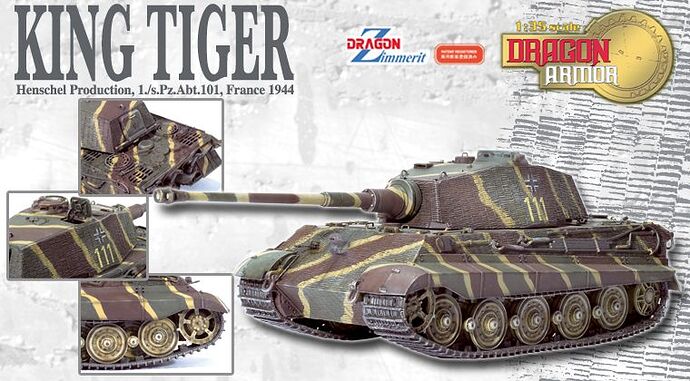 Were there any King Tigers with this cammo, or is it just an “artistic license” from Dragon?
Thanks! 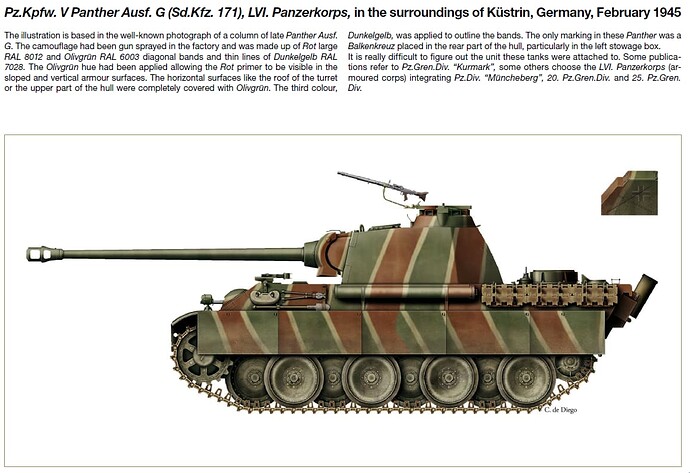 Thanks! I recall having seen at least one Panther with that scheme, but couldn’t find any of a Tiger II so far.

I may be incorrect so further investigation is warranted but I think that that type paint scheme was after the King Tiger stopped using Zimmeret.

That’s a good heads up.
I should keep searching for more info.
Thanks!

These any help? Same unit, different tank at Bovingdon Tank Museum. Can’t vouch for total accuracy, but for what worth it’s what I used for my Takom King Tiger build. Turret number is 104, green on white. 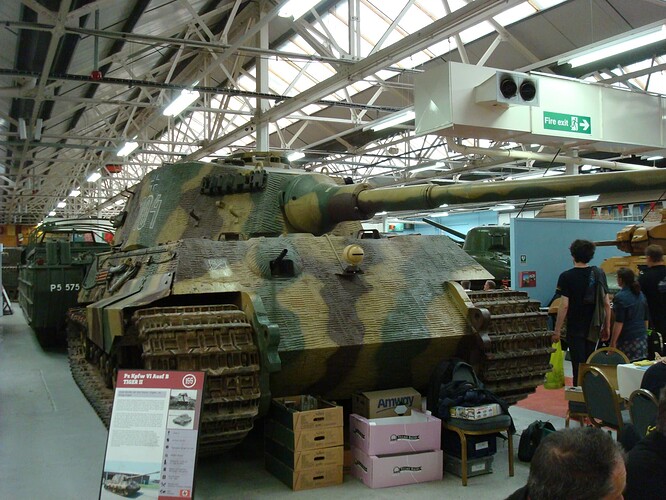 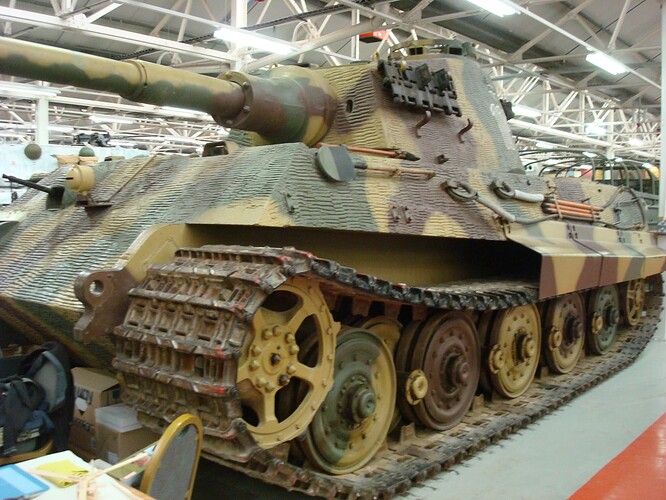 First of all, the unit designation given by Dragon is missing one important abbreviation; SS. The 1st company of schwere SS Panzer Abteilung 101 was pulled out of France in late July, 1944 and re-equipped with the very first 14 Tiger II’s with production turrets. Returning to France 30km NE of Paris on August 18th, 1st. co. was in action near Limay, Porcheville and Melier on the 23rd of August. Other actions include attacks at the Seine bridgehead on the 26th and Magny-en-Vexin on the 29th. Tiger 111 was KOed by British Shermans on road D 981 near Gissors on the 30th of August.

Tigers in Combat, Vol 2 states that these 1st co. Tigers were painted in large, irregular brown and green spots on a base of Dunkelgelb, similar to as seen in the above example from Bovington. I have not seen any photos of a Tiger II with a production turret in the scheme Dragon has depicted. It is my belief that this paint scheme is a conjecture based on the much later, well-known photo of a Panther G in this scheme, (as shown above in the post by wjameson) and not based on any actual photograph of a Tiger II of the 1st co., s.SS.Pz.Abt 101/501. If I’m wrong, please show me the photo.

This particular tank of course was donated to Bovington from the Army’s collection at Shrivenham (now the Joint Staff College); the Zimmerit was purportedly applied by 2 x SNCOs using a popular floor tile cement. The tank’s cleaning rods are those from a Chieftain, but at least it looks like the tank is fully equipped; I just wish Bovington would ensure that all their exhibits were thus equipped - they would just look better.

Well, so far the only pic I found that shares any similarities to Dragon kit is this one from tanks-encyclopedia site, but captioned as a Tiger Ausf.B from s.Pz.Abt.501 (1st SS Panzer Division) in Belgium, December 1944.

In trying to match the Dragon paint scheme, the only close matches I can find are on the pre-production (Porsche) turret tanks like these: 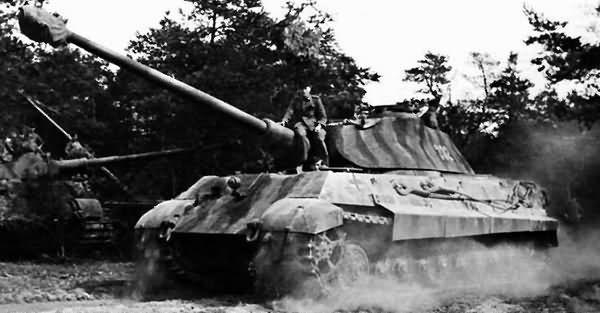 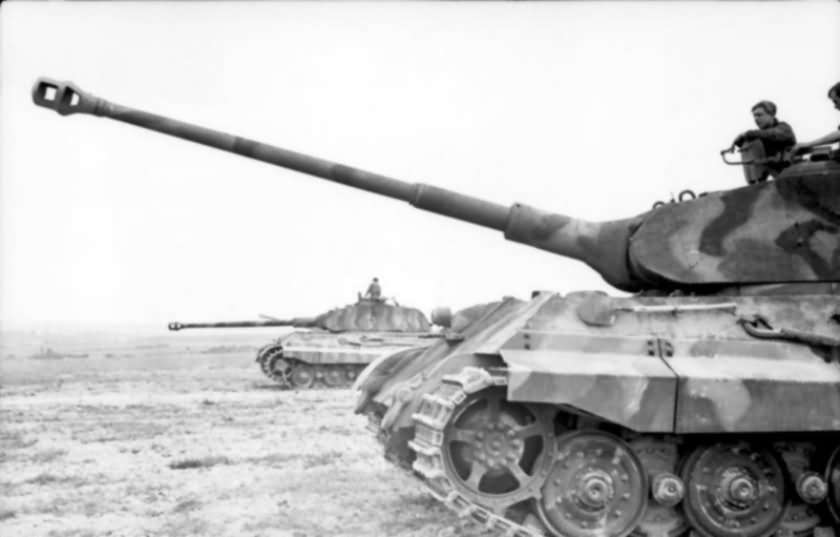 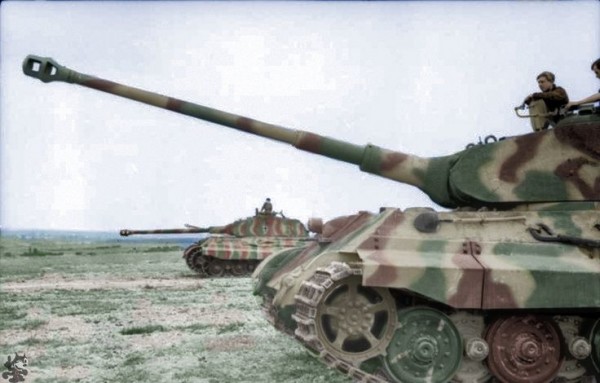 These are from France 1944.
As far as regular production turrets, the best I can find are: 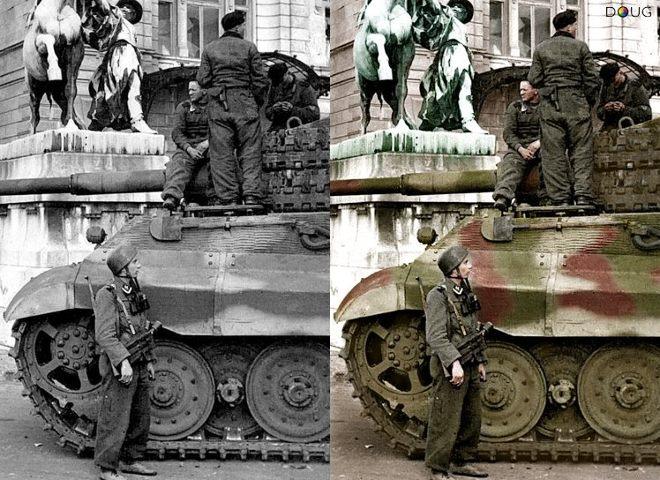 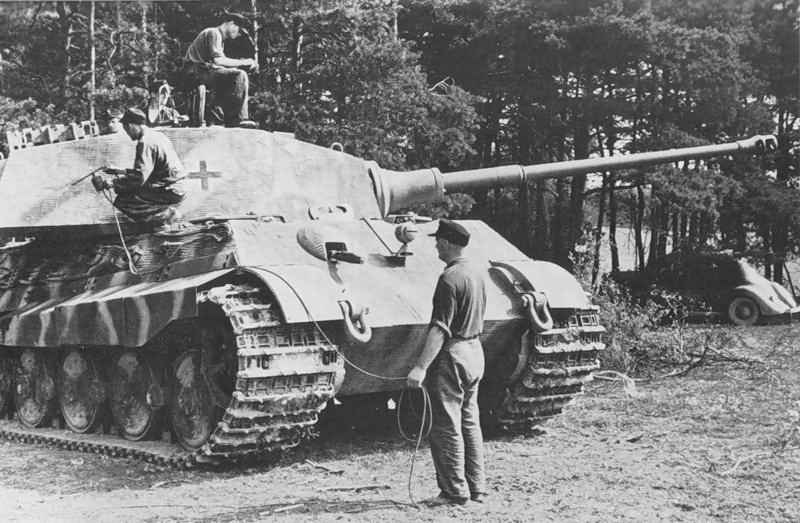 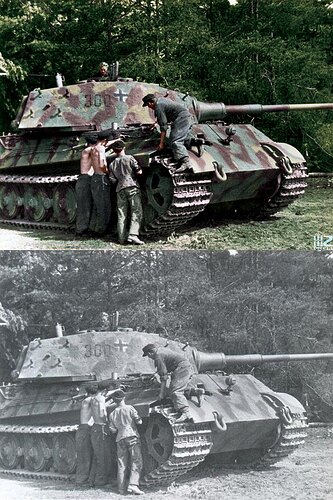 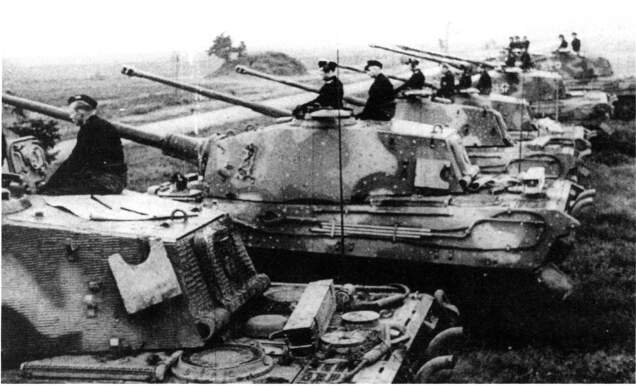 Most, if not all of these photos are of sPz Abt 503, an army unit. Don’t get caught by the Ardennes pictures, I’m pretty sure the tanks fielded by SS sPz Abt 101 in the Ardennes did NOT have Zimmerit. This to some extent dictates your choice if you want to stay with the same unit. I was really looking for a scheme for SS sPz Abt 102, that of II SS Pz Kp, but they didn’t get their Konigs Tigers until early 1945, which makes them completely wrong for this kit.

Well, in fact I am interested in that particular cammo scheme, as I stated in my first post.
That’s why I asked if anyone knows about an actual Tiger II as depicted by Dragon -zimmerit included- no matter the unit or the location.
Anyway, all your replies were really useful!

What I found so far is that the 1./s.ss-pz.abt.101 was equipped with King Tigers with zimmerit while operating in Belgium.
There’s a well known photo of #113 abandoned at Jemappes with its zimmerit in pretty good shape.
So the Dragon model might be right about the unit, while uncertain about the cammo. The position of the balkankreutz is correct for this unit, also.

@Hohenstaufen You are correct, most of those photos are the 503. They maintained their Zimmerit well into 1945. Other units may have done so as well. The factories stopped applying it in 1944, not necessarily the units.
I was replying to the original request, info on real tanks with camo similar to that shown on the Dragon kit. A lot of model kits (not just tanks) show “fanciful”, i.e., made up, paint schemes, so I posted what I have of the real thing. No models, museum pieces, or artwork, just period photos as close to what was requested as I could find.
Ken

I have been working on a porsche with this scheme. Thought it might help you with a multi view if you like it. I am still deciding on with skirts or without, so it been sitting for awhile.

I have no info on its reality. 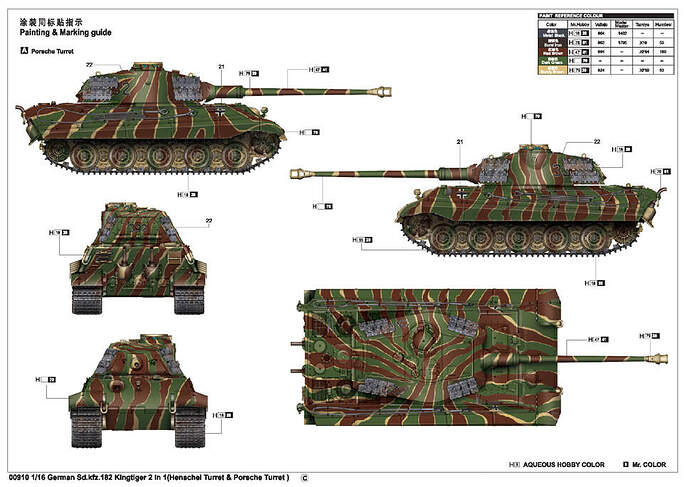 Thanks! Those views are great.
I’ll probably go for this scheme, no matter how accurate it might be.