can anyone share long term experience with workable plastic torsion bar suspension offered by the like if Meng? do they sag over, say, 3-4 years?

Not an answer, but I don’t see the point of the workable suspension. I glue them all solid. Unless you are displaying it on a base over rough terrain, why have them workable. Even then, I set them on the rough terrain and glue them solid.

I came across only one model with working torsion bars - Ya-12 from Miniart. I spent a lot of effort to make the torsion bars really work, but then I glued them anyway. Mainly due to the fact that in the first version the tractor was lower than it should be. 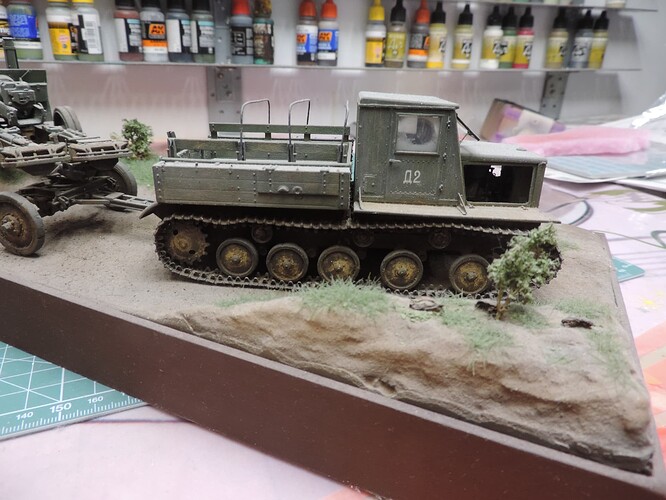 I fully agree with HeavyArty that this is only necessary when mounted on a diorama with an uneven surface.

Here’s an answer - Still working after several years. I can understand the concern - UV seems to affect some plastic (Evergreen is a fine example) and makes it brittle. However, hidden in the hull I expect them to last for years.
For those who don’t see the point of a workable suspension - it’s much easier to make the vehicle conform to the terrain when you eventually put it in a diorama, than to reposition a static suspension suspension and try to make the terrain conform to it. And how many of us have later decided to redo an old diorama? I know I have. It’s certainly nice to have the option of having a suspension that simply repositions itself so you can place it on different terrain. Run a bolt down through the bottom of the hull a la Shep Paine (I bet he would have seen the value in this feature) and pull the vehicle onto the base via a nut underneath the base.