Hi, I want to build 1:35 soviet factory in english bond. I am practically still a kid and have never seen a bigger brick structure in my life so I have a couple of question.

Any other ideas what can I add? Some other esthetical features, …?
I know that is a lot of questions, but Im really clueless. Thank you so much for any kind of help.

Edit: another question: how thick should the walls be? It will be the main wall of the building.

Some of the other questions depend on the material you plan to use, how big do you plan make the base, are you trying to show the outside or inside of the building.

Hi, thanks for response
The first picture was made by me in paint, thats why it looks like the flemish bond. I just tried to paint the concept of making corner in english bond.
I will be using tiny cork bricks. 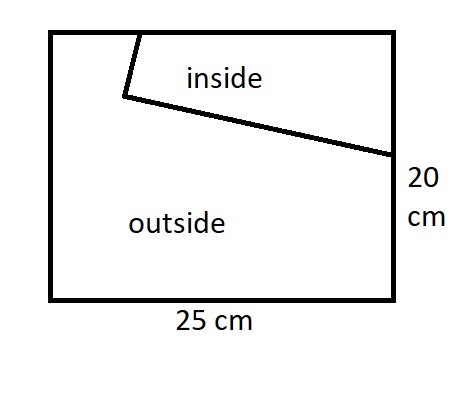 The main view will be outside of the factory but I would like to add some detail to the inside. Im thinking pipes; I, L beams, destroyed roof, stairs.
I forgot to mention that the factory will be destroyed.
I am worried about the cork bricks. I started to make some but the shape of them is kinda irregular. I find the cork hard to work with. I am kind of a perfectionist and it really bugs me that the sizes of the bricks will not be completely the same.

Picture 2.
That’s to “stiffen” the Wall. If you have a long wall, like this Factory wall, it is always good to make it more rigid. It is also most likely were the Roof girders rest on. If you look closely at the picture you can see how they did it. The brick sits out the width of a brick plus a mortar joint (10-12mm).

Picture 4.
They rest on the brick wall and there are bricks around it.

The width of the wall is most likely around 36.5cm. You get that measurement with a runner plus a header. So you lay your runner and behind it you lay a header plus a (10-12mm) joint in between.

I am kind of a perfectionist and it really bugs me that the sizes of the bricks will not be completely the same.

I completely understand. I am a tool hoarder, so a slicer and chopper is highly recommended to get those consistent cuts imho. 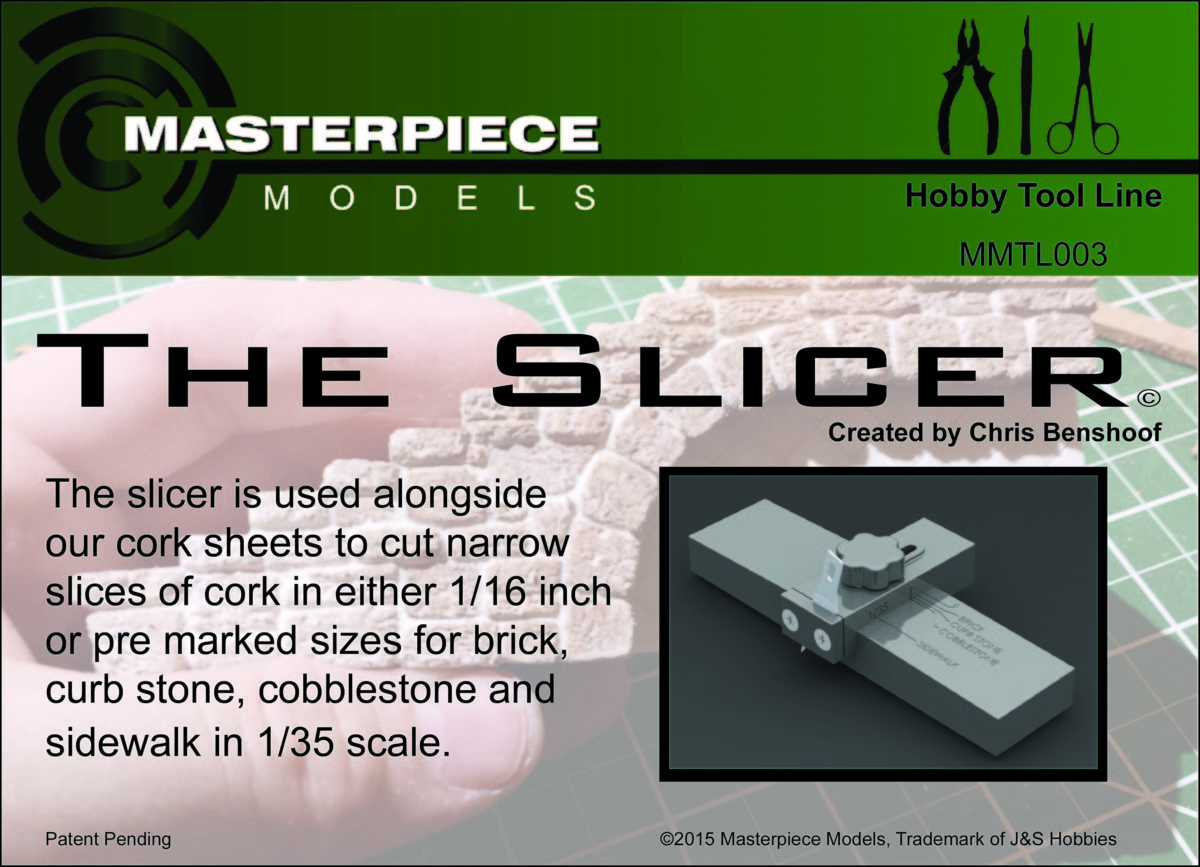 The Slicer Cork Cutting Tool is one of the best on the market today! Use it to cut scale bricks, cobblestone and more! Shop at Masterpiece Models today! No sloppy, “fits all”, cuts any angle (whether it maintains the angle you want or not) complexity. Use the precision mitre guides to assure accurate angle and repeatability. Retains the high precision, extremely sharp, inexpensive single edge razor...

Cork is hard on blades so except to change them out. Here is blog for cork I used back in 2015 when I was messing around with cork. 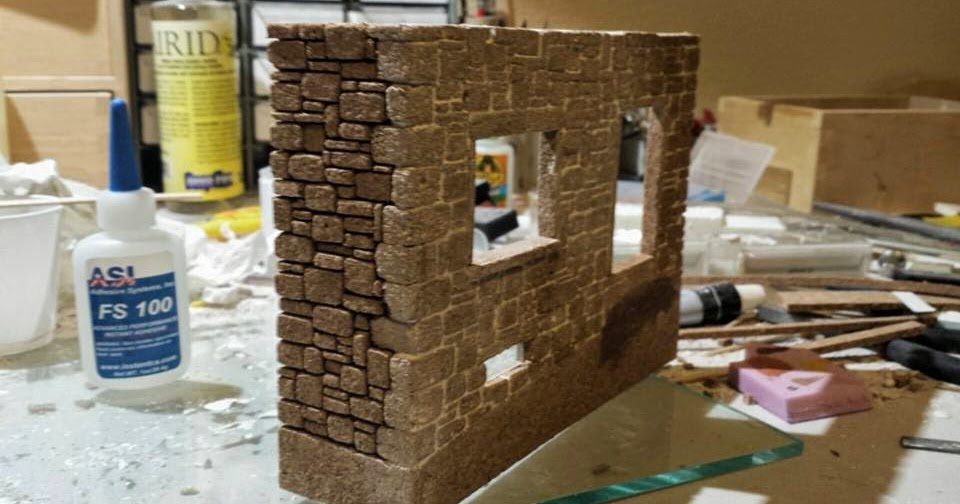 There are many ways of using cork to make stone and brick, this is just my technique. I am by far the first person to use cork, I learned ...

You’ll find plenty of reference details if you Google-image “Stalingrad factory”, here’s a couple of random examples which may or may not conform to your brickwork template… 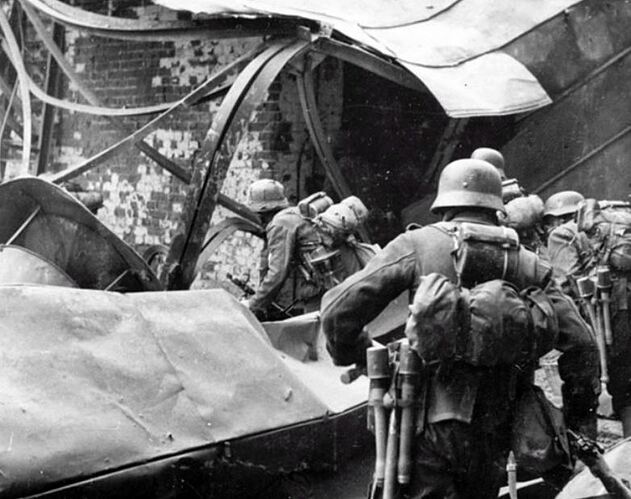 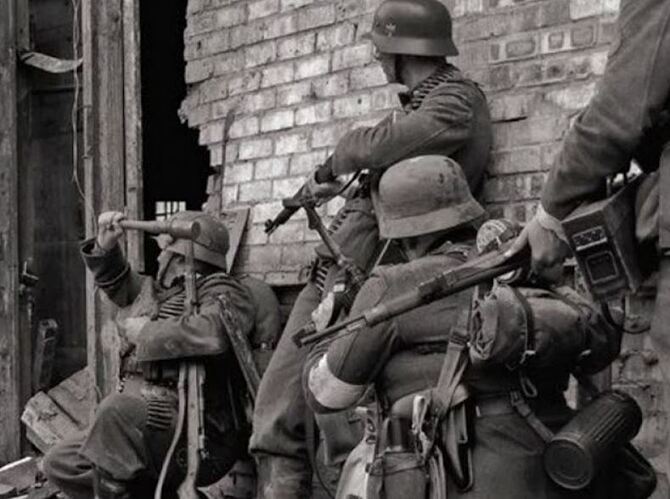 I don’t envy you building it brick-by-brick. Here’s my alternative method used to make cobbled streets but the principle’s the same for brickwork. Best plastered approx. 2mm thick in manageable sections & imprinted when nearly dry. Bonus is the low-ish cost on both wallet & sanity… 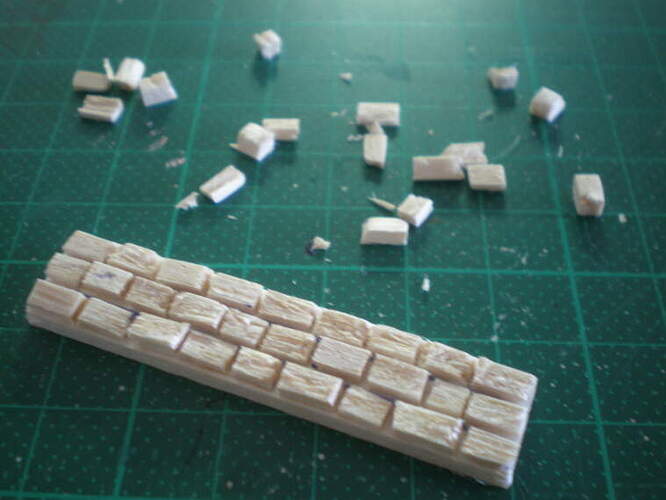 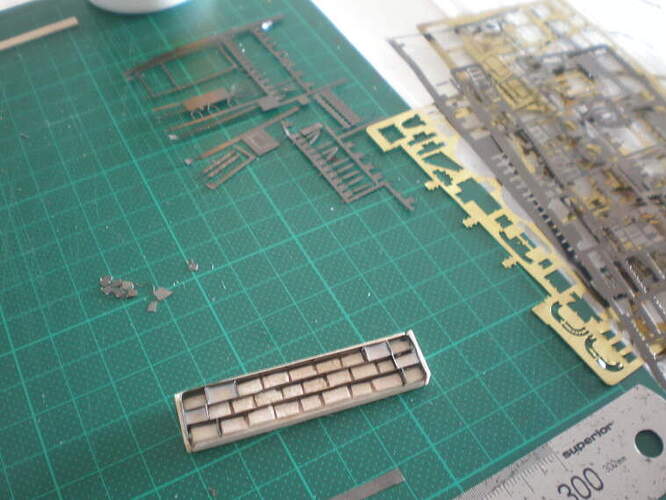 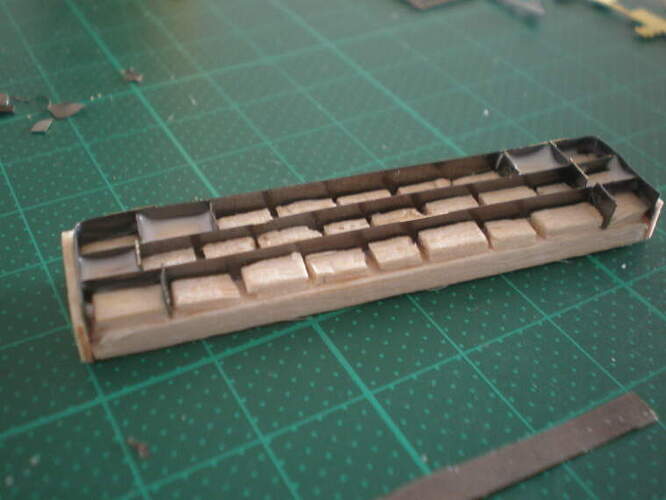 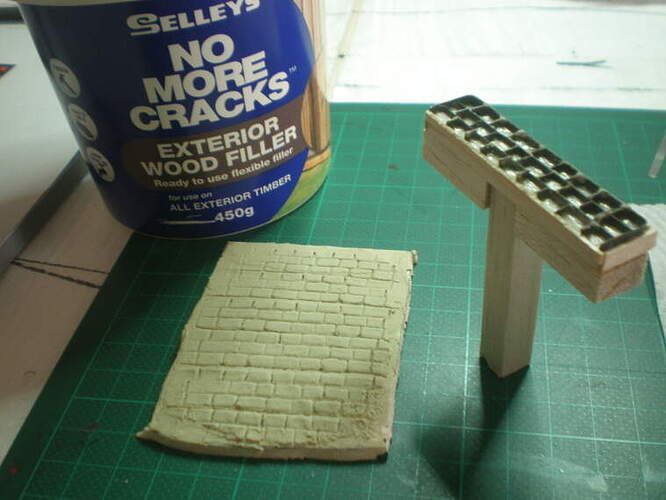 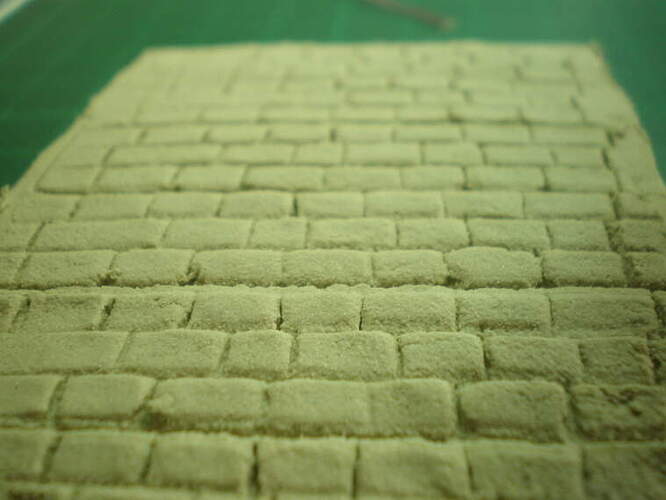 From my 2016 diorama archive, using sheets of polystyrene/foam sheets 1 cm. thick for the walls with a plaster/filler coating, imprinted using a brick jig on the outside & left bare for interiors… 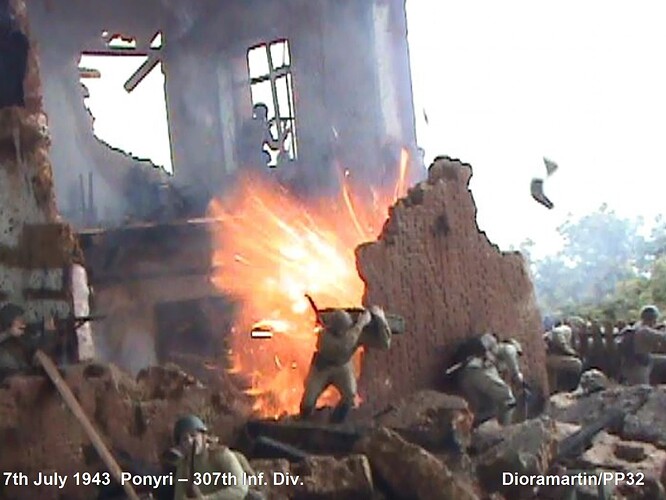 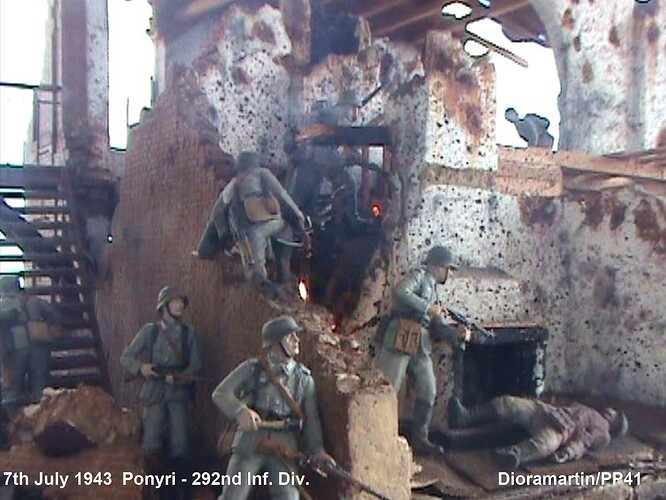 The DIY walls were augmenting MiniArt’s old Russian Building, this is what the kit’s front wall looks like… 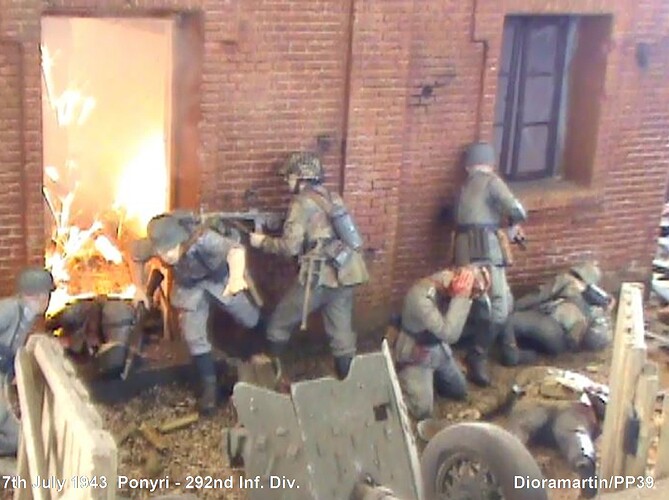 MiniArt’s range (all 1:35) is much larger these days so you might find exactly what you’re looking for, or as above it could serve as a great base to extemporise

Ah yes, I do recall the tried and true ‘Brick-O-Matic!’

I really appreciate all of your help.
I already have this cutter: I am starting to think, that a styrofoam or plaster would be a better idea.

Edit: I went into the shop with construction materials and there was only a textured xps polystyrene. I even looked at eshops in my country and all of them were textured. Were do you buy it?

Are you using a fresh blade?

I will try to find my tools and supplies later today/tomorrow to see how thick the material is.

Additional you don’t have to build a wall with bricks only like these: 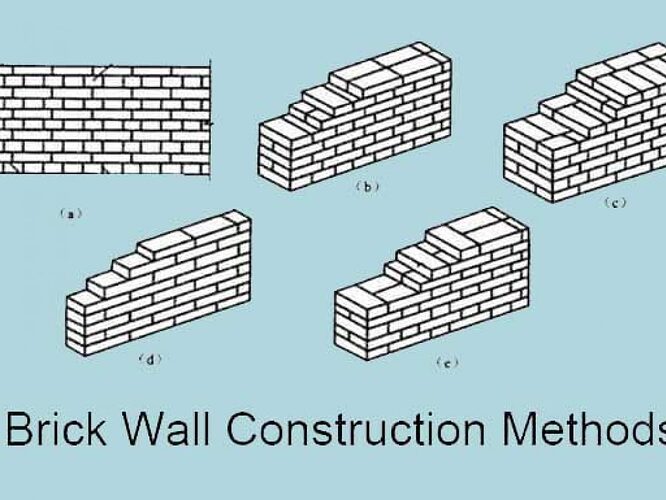 You can add sheet styrene in between the bricks so you can use thinner material for the face and thicker just for the top/exposed courses.

Forget about building a brick wall 1/35th scale by gluing small model " bricks".
Scribe the surface on some other material instead 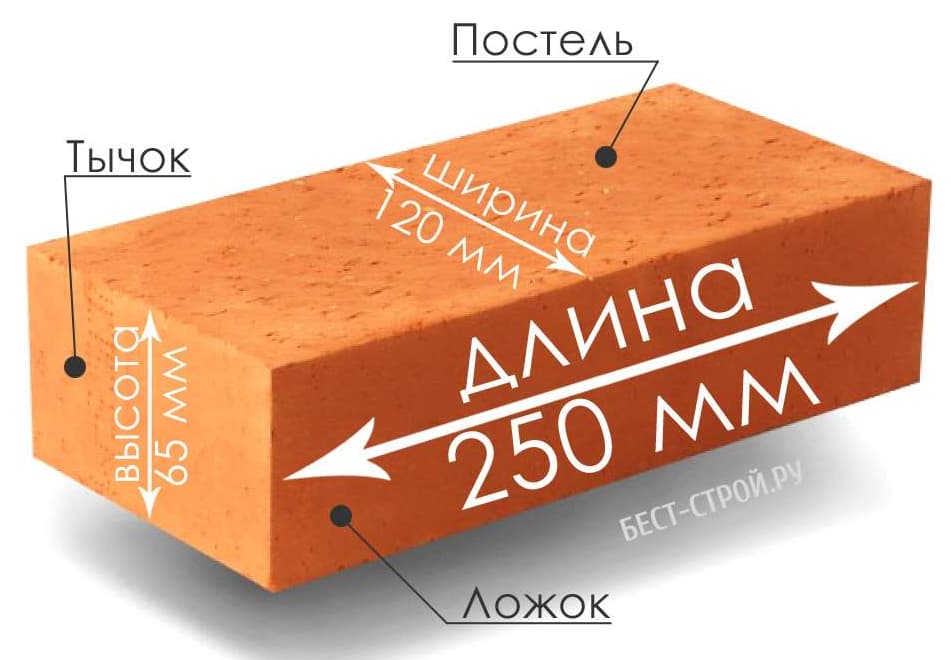 Firstly, hi to ‘Bricks’, welcome to the forum,

I might be a bit late to this but here goes for my two penn’orth worth. Below is a comparative image of English/Flemish bond: 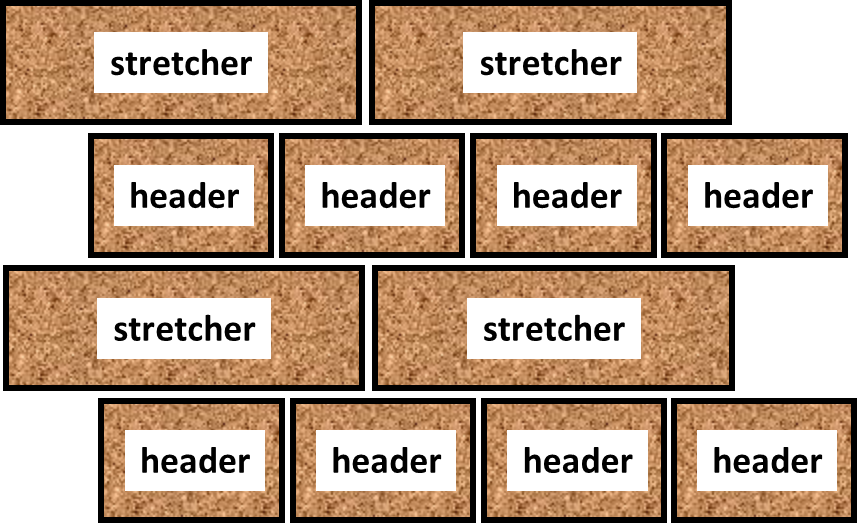 Whereas the Flemish bond has alternating stretchers and headers in the same course:

A typical brick size in 1/35th scale would be:

My apologies for the roughness of the sketches.

As for ‘bricked-up’ arches, it could be as suggested by Ryan (Tank_1812) that the windows might have been filled in as they were not needed but, sometimes, it was a deliberate architectural feature (known as a ‘blind arch’). If it was an attempt to infill an existing aperture then the brick courses and/or pattern would, most likely, not be the same as the surrounding walls, whereas if it was an architectural feature everything would appear similar.

It is likely that the thicker wall/buttress would typically follow the same pattern as the rest of the walls.

Creating the brickwork at the head of a window or door aperture needs some care to get it looking right.

I used scribed clay on my 1/72nd buildings below, but first marked the pattern in pencil until I thought it looked right: 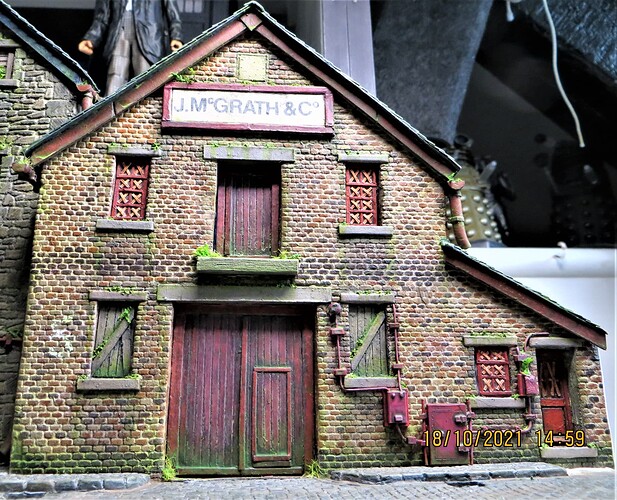 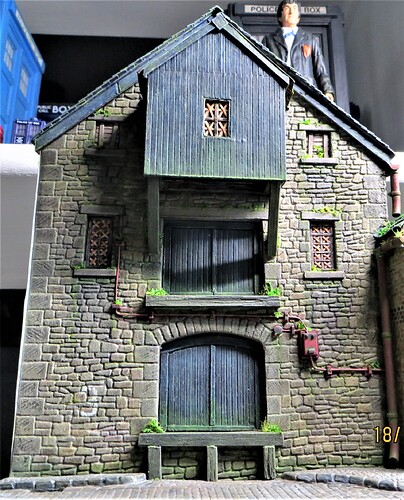 Hope the above helps, and please keep us posted with updates of your progress, it’s always interesting to get ideas from the approaches taken by others.

Again, welcome to the forum.

You can scribe the bricks in foam, like this: 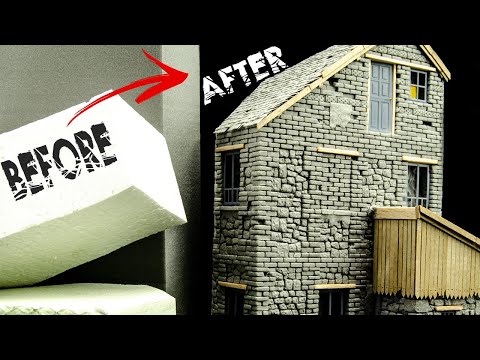 The brick dimensions given here are not correct for English bricks.

Hi, I want to build 1:35 soviet factory in english bond. I am practically still a kid and have never seen a bigger brick structure in my life so I have a couple of question.

Indeed, absolutely correct!
That is why I had to use Google translate to give me the cyrillic letters for “standard brick size”
so that I could search for the Russian standard brick size.
Since the original post asked for:
“Hi, I want to build 1:35 soviet factory in english bond. I am practically still a kid and have never seen a bigger brick structure in my life so I have a couple of question.”

The expression ‘english bond’ can lead the thought to english brick size but since this was to be a Russian factory I thought that Russian brick standard would be the most appropriate.

01. One of the main battle scenes of the movie was filmed at the Lenspirtstroy plant (near Saint Petersburg). The plant was destroyed during WWII and ever since had been used as a setting for numerous films. 02. The set designers who worked on...

Hey, thanks everyone for advice!
I just ordered some 1 cm styrofoam. We will see when it comes.

Another option is XFS foam (insulation).

@DIOWORK has a nice video showing it all. 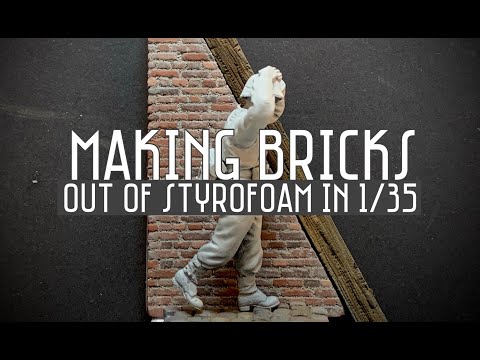 Plus his other builds are great too.

Refer to Ryan’s diagram to understand that the walls with the bonding (header) bricks are double thickness, so that should be taken into consideration as you build your model.

To follow up on the cork, I have used 1, 3 and 5mm. I will show the 1 and 5mm below. They both work but one needs to change the width of the cut to work. Again a fresh shape blade is needed. 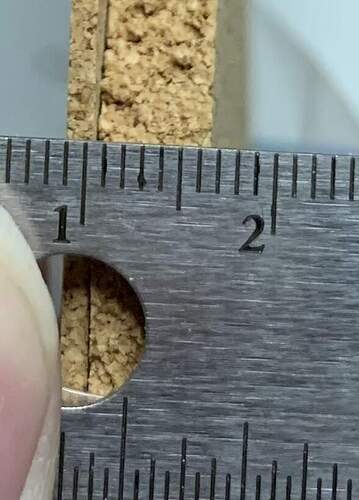 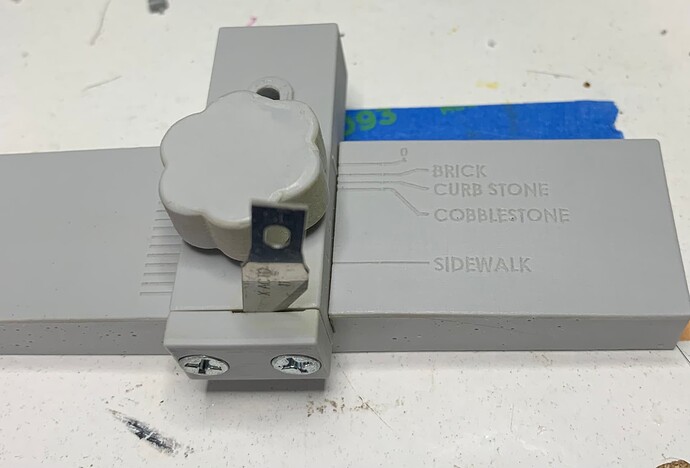 I have set the width to brick and using the 5mm cork.
Having the cork flush I just glide across having firm but not hard contact with the cork. Then with the same setting I tried with the 1mm and that didn’t work. I changed the setting cobblestone. With thin cork laying on the bench, just glide across. Double check you blade is not below the tool otherwise you will cut the table too. 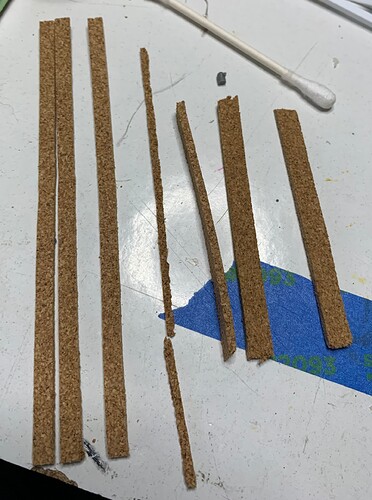 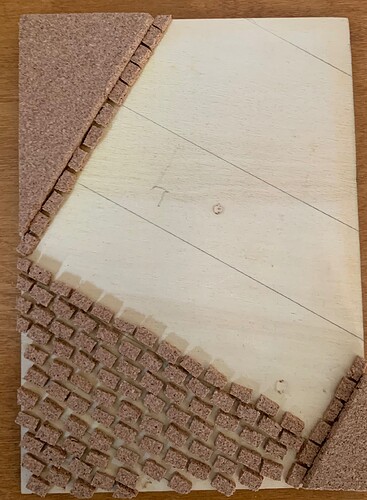 A long abandoned project to make a street scene using the same material.

Yes, I ordered some and we will see. Youtube channel Nightshift has many great videos too.