This all started with my adding the Tamiya after-market recovery spade to my 1/35th scale Sd.Kfz. 9 under construction. The winch and the frame had been fully assembled and then the spade was tacked on. So then I had the winch cable all hooked to the spade and was turning the winch drum manually with my fingers to raise the spade and IT WOULD NOT MOVE!. I quickly realized this is what Riggers would call “a straight pull against itself”. The spade wasn’t going anywhere no matter how hard I turned the winch drum. The winch had no mechanical advantage to start raising the spade, The only answer I could see was for the entire crew to attempt to lift the end of the spade 3-4 feet into the air, in order for the winch to get any purchase on the spade. If I kept this up with the model the rig would eventually destroy itself.

I knew something had to be missing. - So a few days, on and off, spent searching the internet and I had my answer: 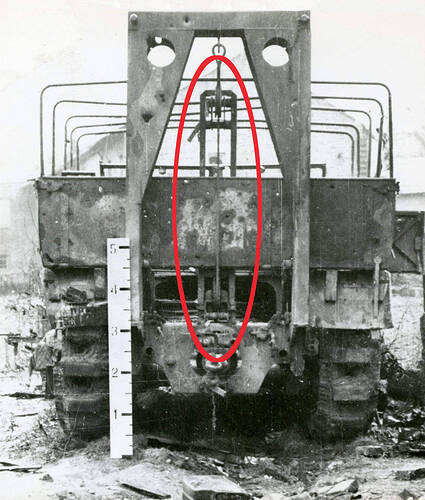 I found copies of a US ETO Technical Intelligence Assessment Report that described the Famo and the arrangement of the spade and the report included photographs! 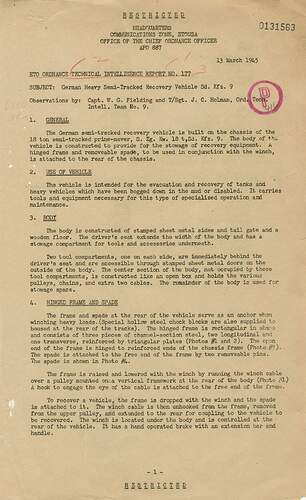 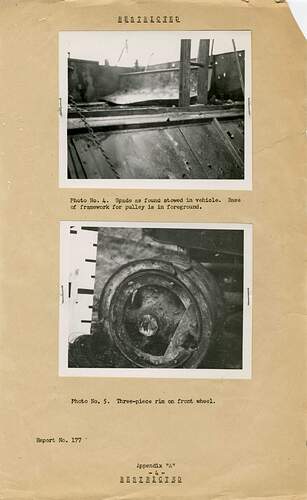 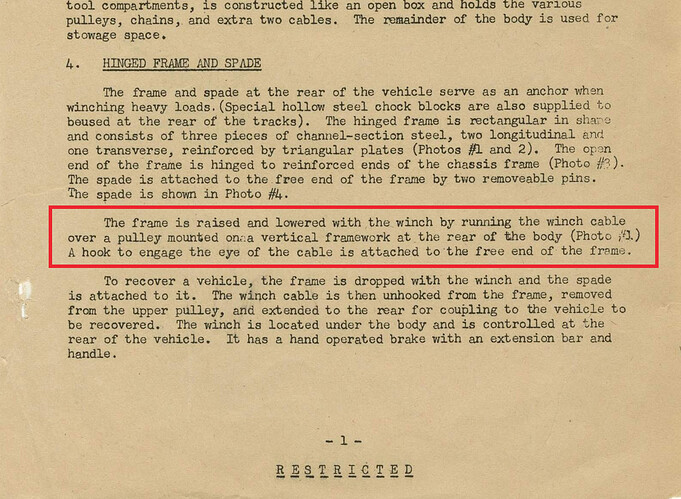 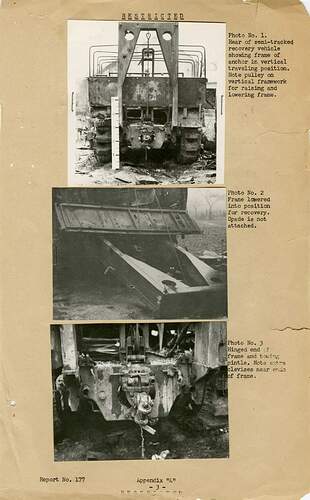 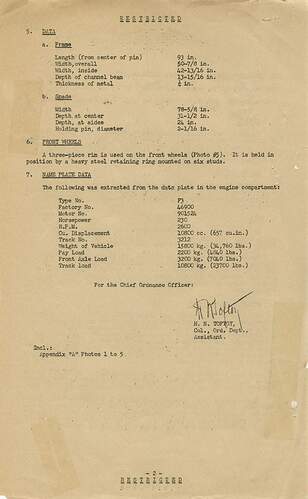 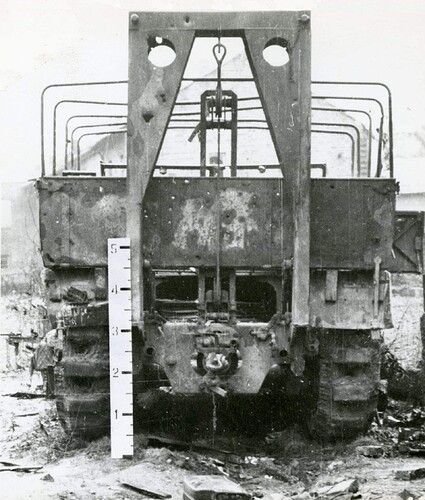 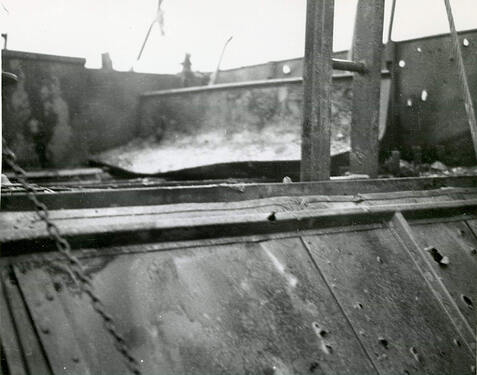 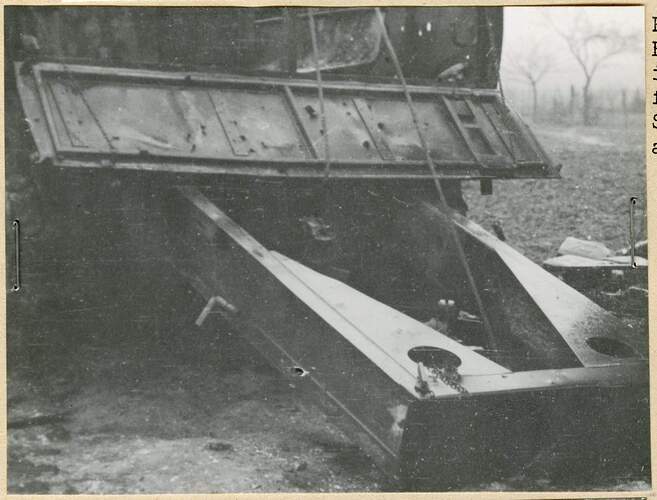 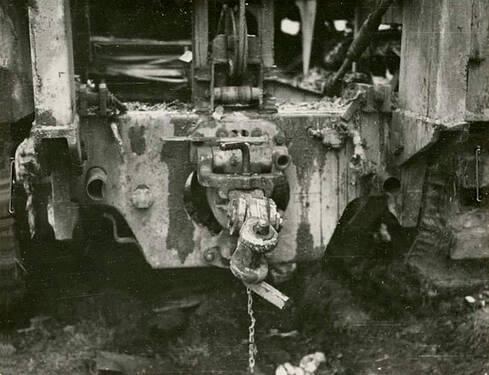 This tower structure mounts at the rear, to the rearmost frame member, extends vertically, up through a hole in the load box floor to a top mounted pulley.

The winch cable would be fed through a fairlead or pulley at the bottom of the tower, then upwards to run over the top pulley and finally out to be hooked to the spade. 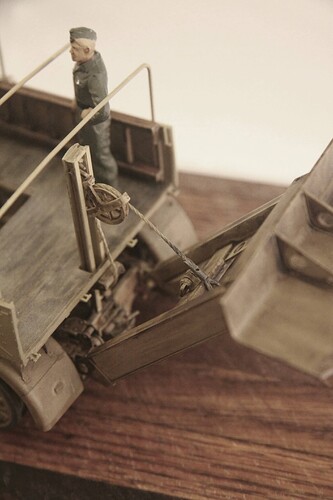 I also found these drawings: 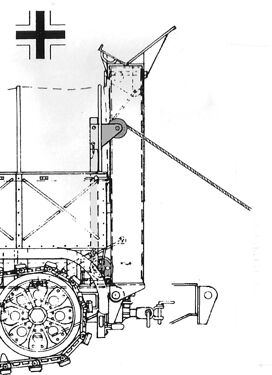 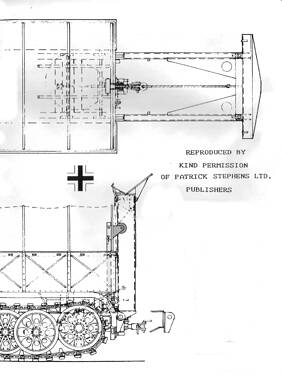 These two drawings are the property of the Patrick Stephens Ltd. Publishers and are used here for discussion purposes ONLY.

Note: As you can see in these drawings the winch cable will run vertically, OUTSIDE the loadbox tailgate. When the spade is lowered the cable can be detached and the tailgate remains functional.

I am currently using this large pulley at the top of the tower because it remains removable on a hook. I can therefore still remove the pulley and lift the loadbox up and off the Famo for the time being. One of the last things built for this model will be that small bracketed pulley at the top of the tower, but only once the model is almost complete. 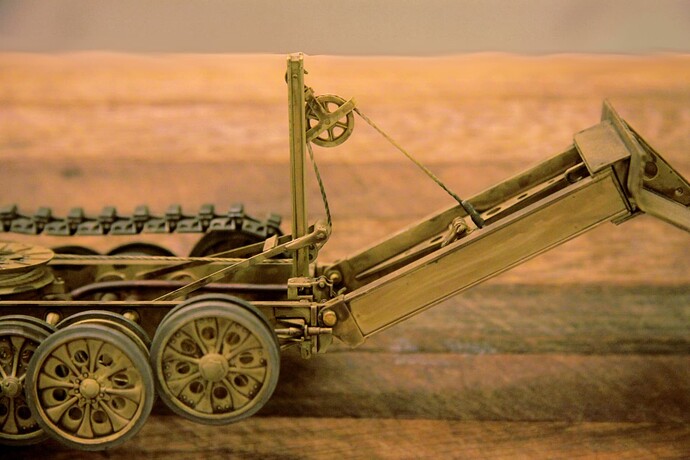 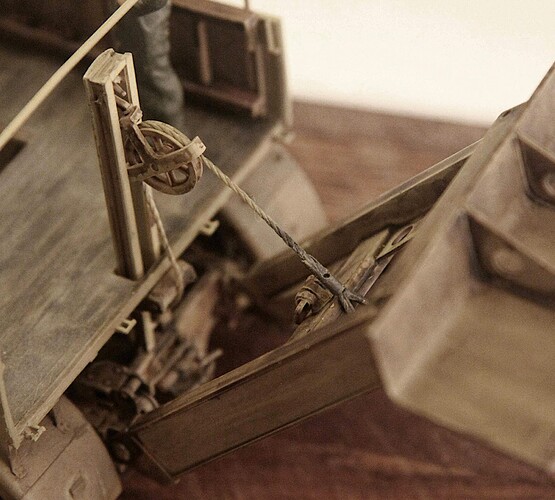 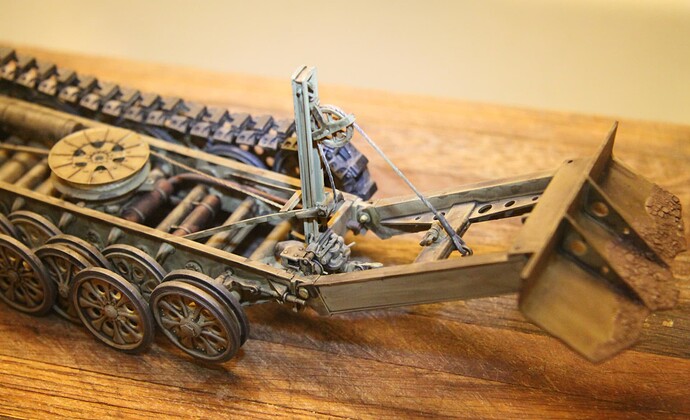 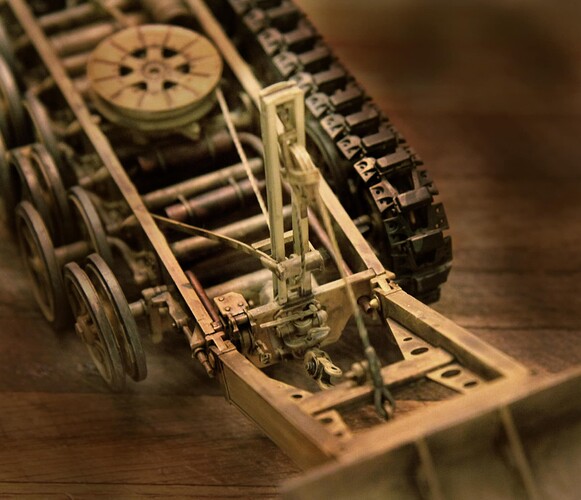 DES even went so far as to offer a resin version of the spade at one time.
No idea if this is still available. 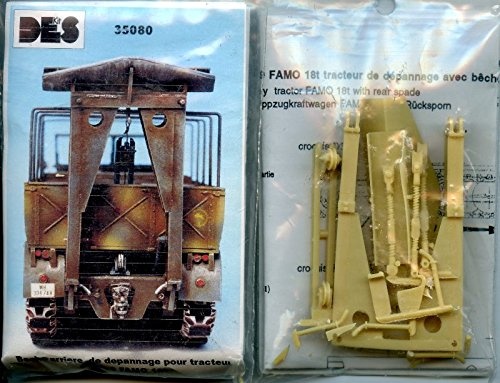 Because of their “War Hammer” gaming background the paint company Citadel offers not only a great line of paints and water based washes & shaders that I use on almost all my models but they also offer (what we used to call, crackle finishes) they now call “Alien Skin”. 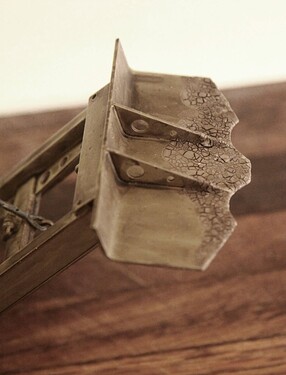 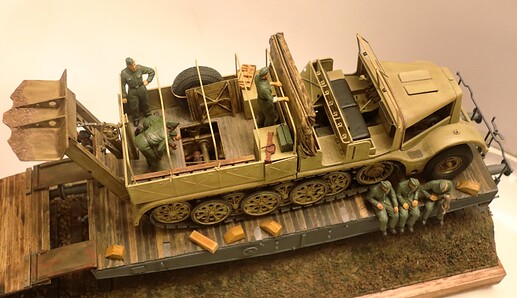 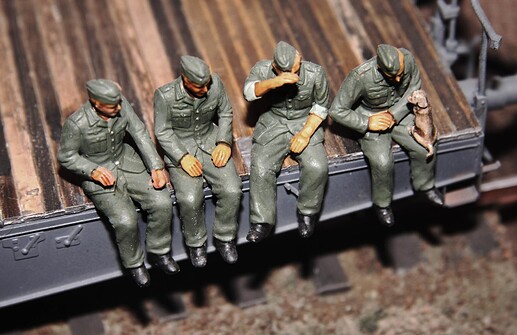 As you can see I have added a wooden floor to the loadbox as well as a winch access hatch.(Some vehicles had this detail.) Added a folded resin top and opened up many of the floor access panels. With the spade tower in place there is no storage for a spare tire underneath the deck so it has been now tied against the left sidewall of the loadbox as has a ladder on the right side.

With this planned movement by train the Famo crew has lots of time on their hands for doing general maintenance AND goofing off – Hey you guys, lose the puppy! 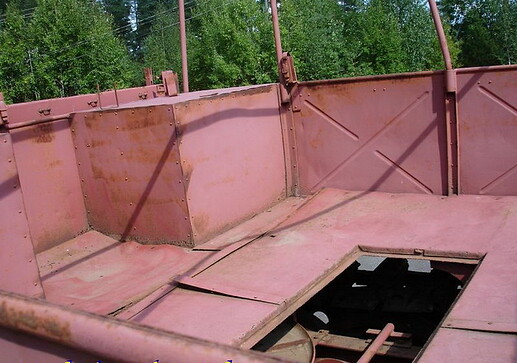 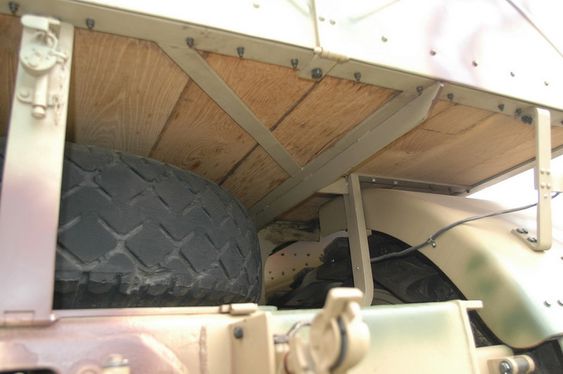 Well - - Something I just found tonight:

I guess this lets the Tamiya design department off the hook, as this photo matches perfectly the recovery spade just as it is offered by Tamiya! 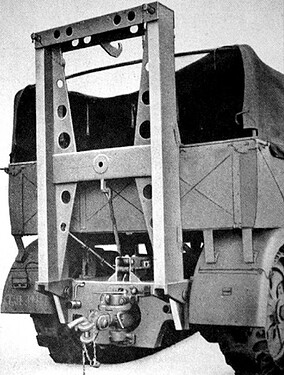 I must admit I chose to overlook the differences in the structure of the spade itself as offered by Tamiya versus the spade intended to work with the winch tower.

These alterations would be easily made should you choose to go that route.

(Cannot tell you how many of these after market kits I have purchased just to get those nicely done pulley set and the cable fairlead.) 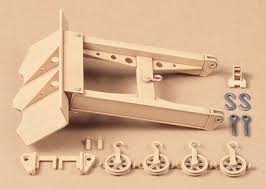 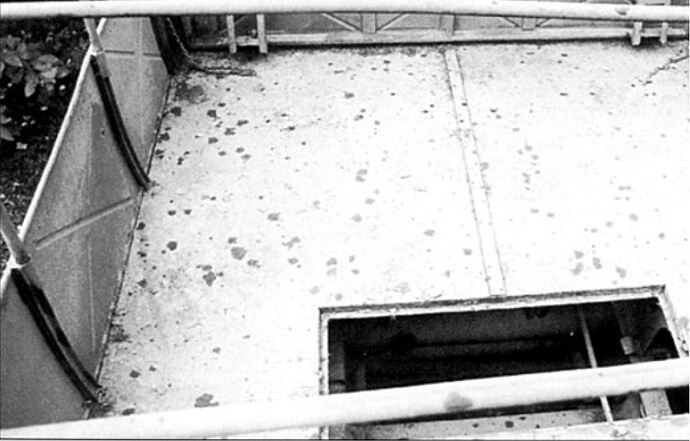 Hmmm, maybe it leads to the wine cellar?

Maybe…I just thought the winch drum should be partially visible…

Well Frenchy the winch IS partially visible in your other photo, looking down into the hatch from the other direction.

I am going to hazard a guess here, based on just a little bit of modern day experience. (Watch out this could be dangerous!) - Some form of light tension still needs be kept on the winch cable when “reeling in” after the job is done. (This is sometimes referred to as walking back the cable.) If this is not done it is very easy for the cable to get fouled, kinked or caught up in the machinery. This is even more likely with a large, horizontal acting, flat and narrow winch drum such as on these German halftracks. So some form of easy access to the winch drum might be a good idea here when things get out of hand.

Also a cable parting or a sudden loss of tension on the cable can cause the line to come off/out of the winch drum spool and quickly become just a jumble of cable. (Just like with a severely fouled fishing reel.)

That’s my 2 cents worth on that question.

p.s. Also I just like the idea of that hatch in the floor because it adds complexity and even more visual interest to the model and also helps to show off all that wonderful underbody detail of the big halftrack! I am rather surprised that Tamiya deleted it.

Well Frenchy the winch IS partially visible in your other photo, looking down into the hatch from the other direction.

I had noticed that Mike, but it isn’t the case in the second view…

Just due to camera angle/direction.

OK I get it