This is partial text from the full article (usually with photos) at https://armorama.com/news/feuer-frei
Klaus-Adler March 31, 2021, 7:47am #2

and here was I thinking that we were celebrating on of Rammstein’s popular songs.

Thanks for the news Engin.

For some reason I can’t see the 2-figure set image on the news. Here it is: 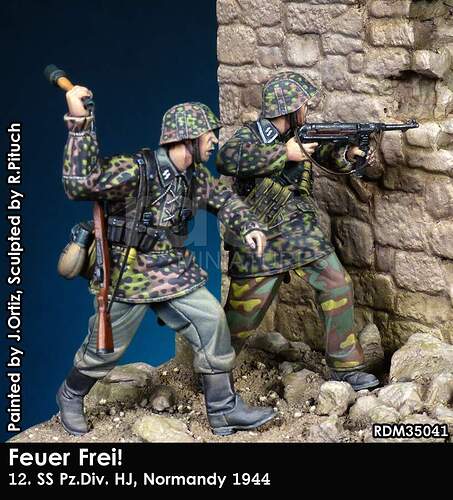 Nice set of Figures ,
Wised i could paint like this .
The Nco’s rauchtarn shirt/ jacket and the lower sleef parts in platanenmuster… Real nice detail !

Sorry for raining on anyone’s parade, but why do 9 out of 10 new figure release have to be WWII German troops, and the vast majority of those SS troops?

Am i wrong or shouldnt that y-strap sling be attached to the belt exactly where the middlest ammo pouch is ? I mean that guy with Kar 98k.

You’d think they were the good guys.

Oh, Hell yes. This will go great with my Panzergrenadier Regiment 25 project. I still need to make a new post in the new forums, transferring everything over. I love Rado’s stuff. They do a great job. The grenadier throwing the grenade I’ll definitely modify. I’m not 100% sold on his pose but love the NCO with the Mp-40

I always wondered why no companies make the folding stock of the MP 40 open. Firing the gun like this will just be a Hollywood-like waste of precious ammo.