Hi folks, trying to ID this figure I saw on Fleabay. 1/16 I believe. Tried the reverse image search but came up empty on that. 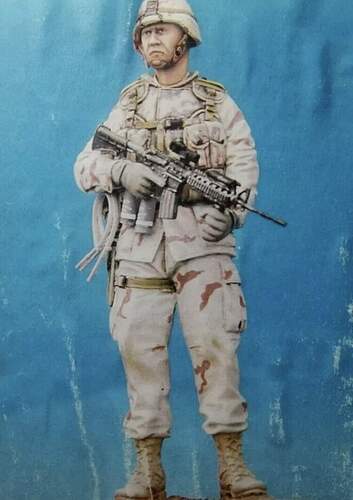 If anyone knows the manufacturer or stockist of the original item, I’d be very grateful.
G.

That is one of Airborne Miniatures’ first U.S. soldier in 120mm resin. It is long OOP.

Maciek may still have some in storage though.

I built it and it’s a decent figure. Parts fit pretty well and what you see is what you get. I didn’t display mine because it has the older tactical vest before the MOLLE loop system, but it will go with 1993 BlackHawk Down per se as that is the tactical vest used.

Thanks Peter, I had a feeling it might have been from Airborne. I’ll email them and see if there’s any left about. It’s a shame it’s OOP. Looks like a pretty good figure. Recast route is out of the question though . Might have to bite the bullet on this one. Shame…
Thanks again mate.
G.

I hate to nitpick, but this figure is not appropriate for the early 1990’s BHD period. This is an early OIF/OEF figure. The early pattern OTV, M-4 with M-68 and PAQ-4, the thigh holster and the zip ties are a giveaway. In 2003 - early 2004, not everyone had a full MOLLE rifleman’s kit, which was considered RFI issue. Many of us were forced to wear our LBE over the vest, or mount ALICE items directly to the vest. LBV’s were still common and likewise worn over the OTV.

Just had a reply from Maciej. None left, unfortunately. Looks like I missed the boat on this one.
Thanks for the replies, Gents.
G.

Thanks for the correction, Travis.

I wasn’t too sure how far back Maciek’s figures go, but I do know that he tries to keep all his figures up-to-date when he releases them.

Sorry to hear that, Lazarus.

I think some of his earlier kits are still available online with a Google search.

I’ve already tried Google, mate. Plus the usual suppliers like Exter and Berlin Zinnfiguren. Can’t really trust eBay and AliExpress is a big no-no! It’s a pity that it won’t get re-released. I’m sure it would sell well. Better add it to the list of many that I’ve missed……

Airborne Miniatures has some really nice 1/16 scale figures. A bit difficult to assemble with so many pieces, but well worth it in the end. Just look at this one reviewed by MrBMB (okay, this is 1/9 but it also comes in 1/16):

I hear you, brother. Still got a couple of Airborne for the bench to do, plus a few I’m interested in that I’m waiting to come back in stock. I’m not too bothered about the parts count but, I wish the moulding plugs were better placed. The way they are now risks destroying some detail.
Best laugh of all? The ones on eBay (coming from China) are priced at £39-42. Berlin-zinnfiguren sell the real thing at €34, so about £30! And people are still buying recasts? Go figure!
G.