Polar Lights continues to expand on their 1:350 range of Star Trek ships with the recent release of the Oberth-Class Science vessel USS Grissom, as featured in Star Trek III The Search for Spock. 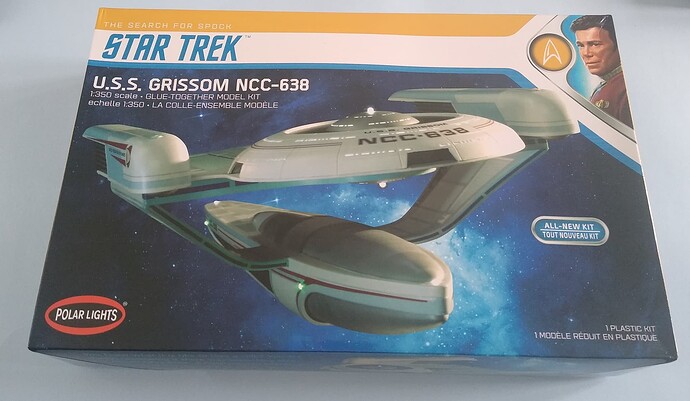 The box is in the now standard design that pretty much all Star Trek merch is appearing in, no matter who has made it. It’s eye catching yes, but I do think does take away something from the original manufacturer. There’s only that little logo in the corner to tell you it’s by Polar Lights. I do like the inclusion of the various Captains in the upper corners. These are quite nicely done and in this case, is one of the better portraits of Shatner that I’ve seen. What we’re interested in is of course the ship and we’ve got a finished example of the kit photoshopped onto a nebula. 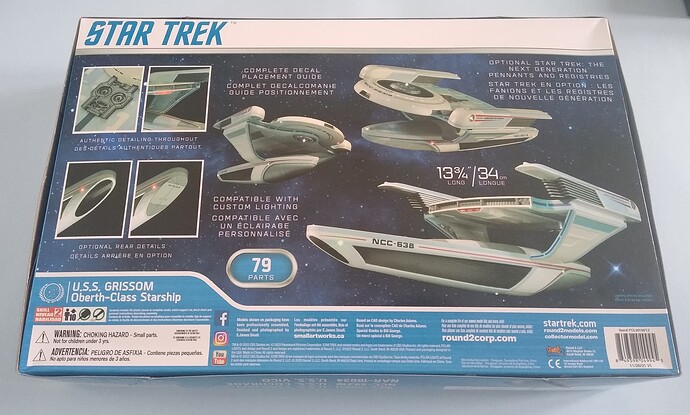 On the back we’ve got some more photos and some details about the parts count, size and finishing options. Polar Lights have provided options for 7 ships of the class: Oberth, Copernicus, Pegasus, Tsiolkovsky, Cochrane, Vico and of course the Grissom - named in honour of astronaut Gus Grissom.

Let’s have a look in the box. We’ve got 5 sprues of parts for the ship, one clear for the windows, lights and impulse engines and the now standard display stand in all of their kits. 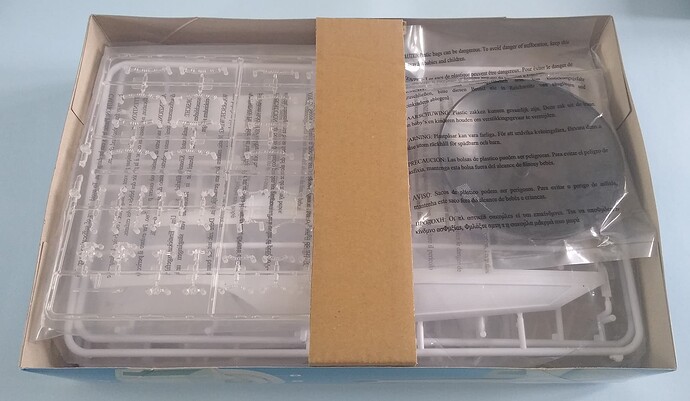 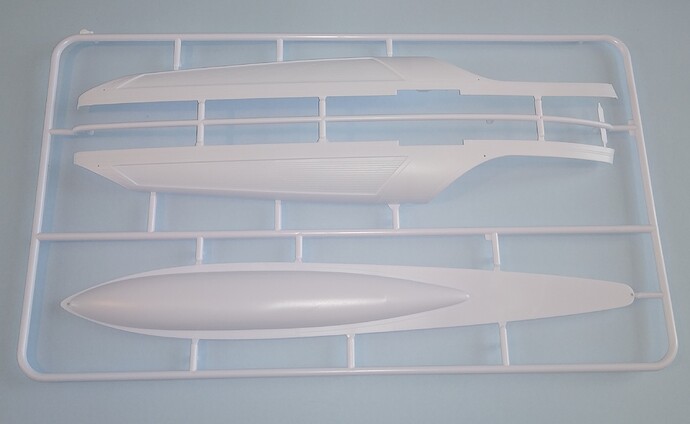 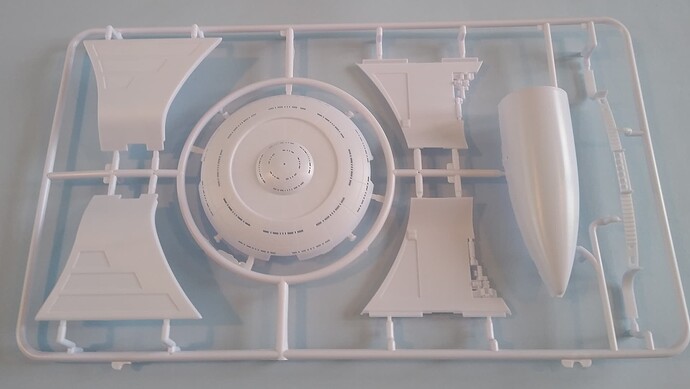 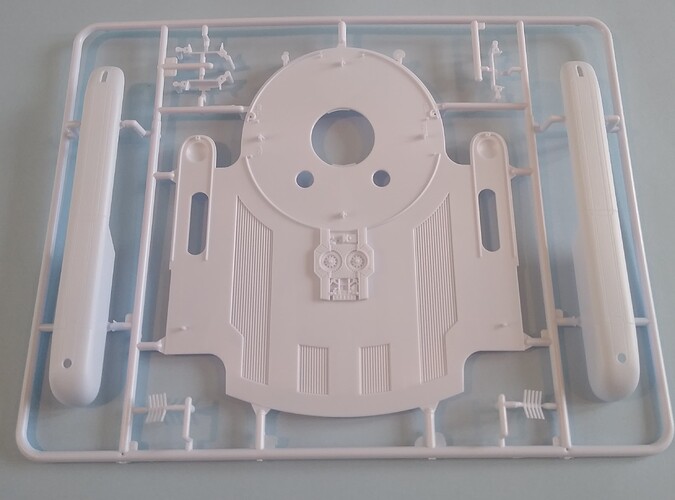 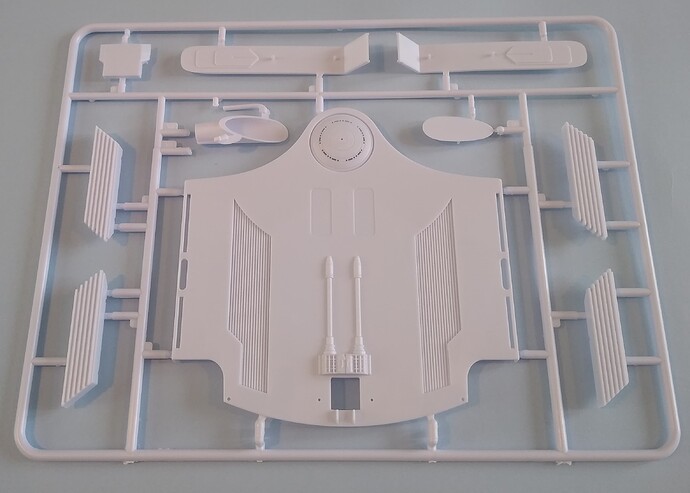 There’s some nicely engraved detailing on the pontoon, saucer and tops of the warp nacelles. 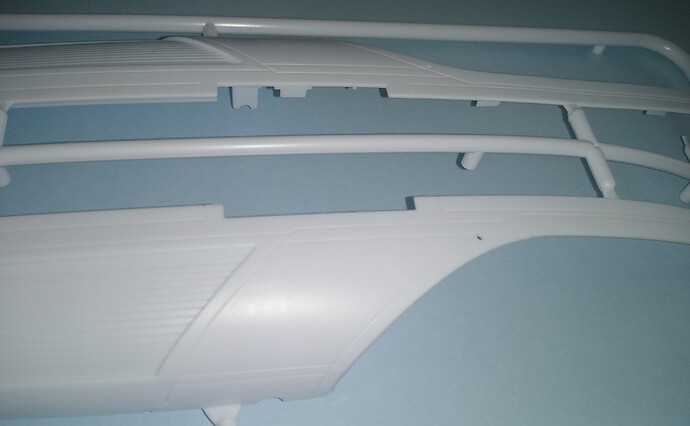 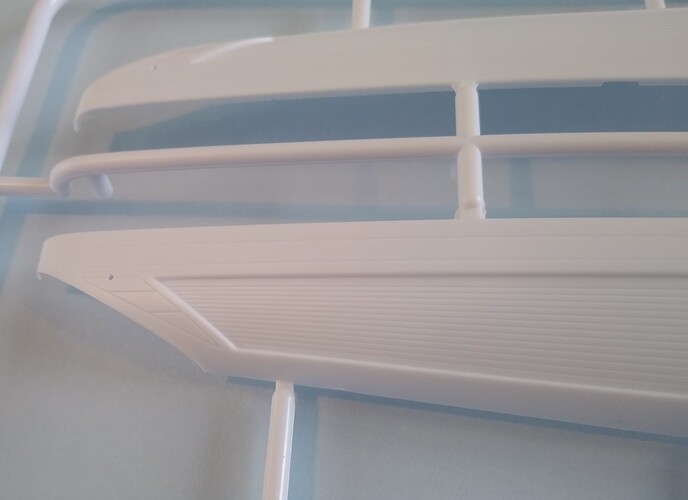 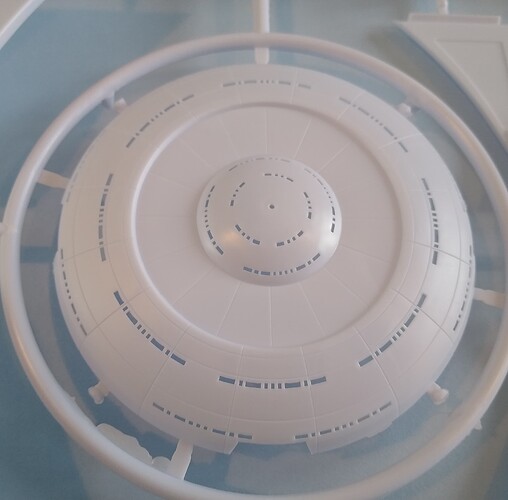 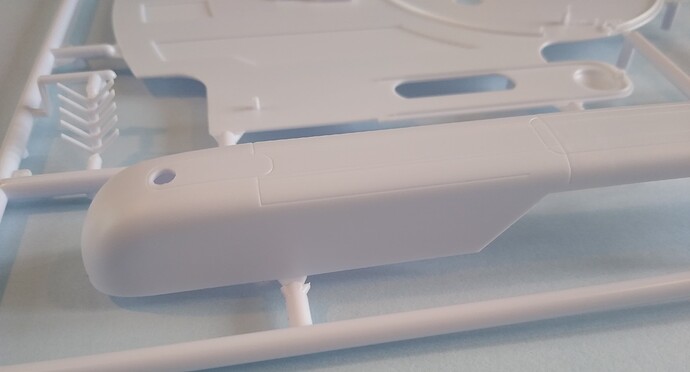 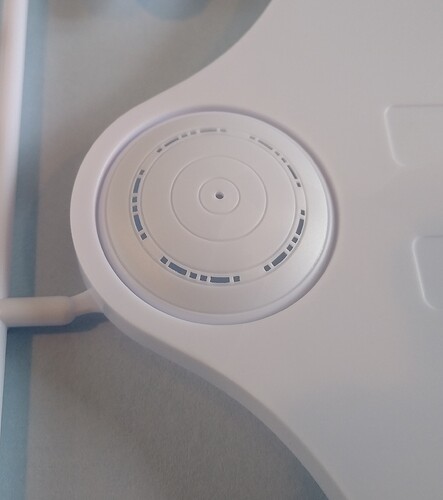 Some of the detail greeblies are even identifiable. We’ve got suspension springs, parts from a car chassis, truck wheels, engine components and even the blaster cannons from a T-47 Snowspeeder! 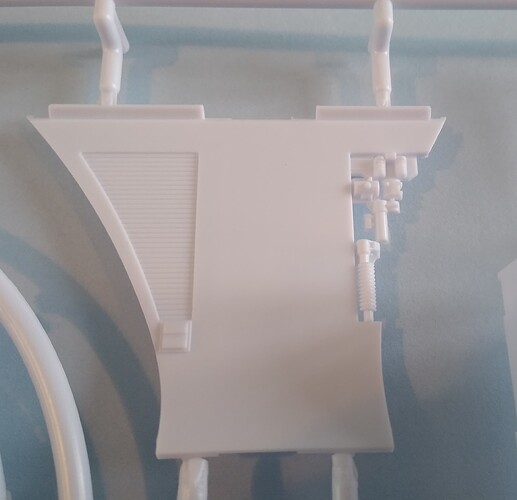 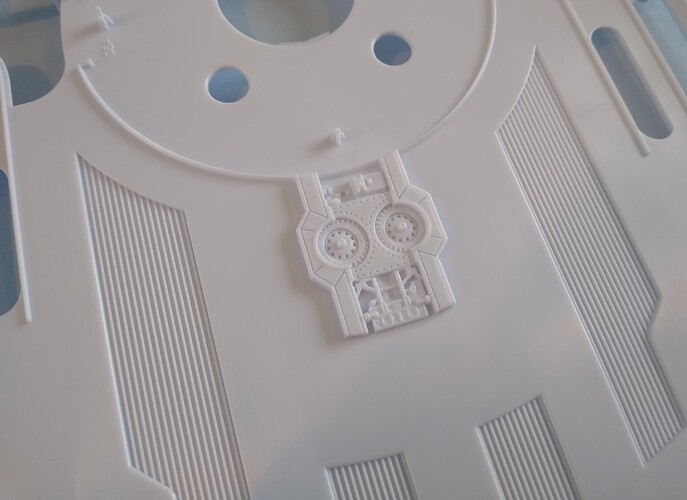 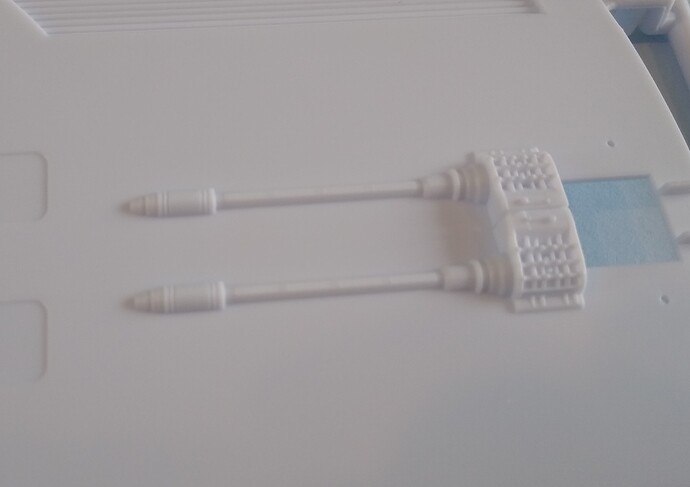 Lighting will be easy with this kit. All the windows, engine and navigation lights are moulded in clear. Polar Lights also have also very cleverly designed in channels and holes in the interior to pass wiring through. Very thoughtful of them. 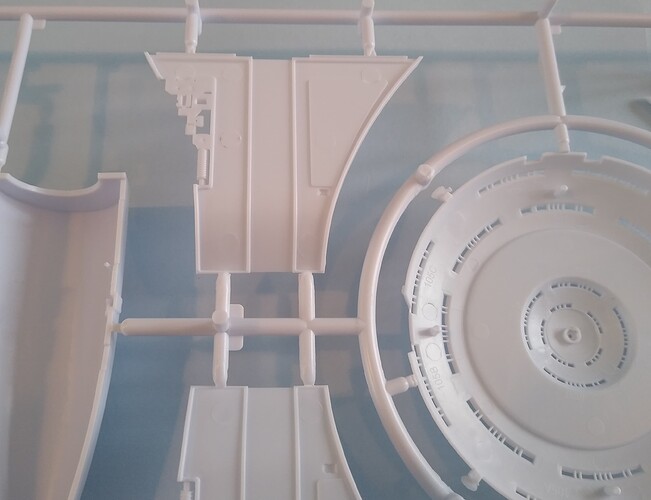 The instructions come on a folded sheet and look easy to follow. 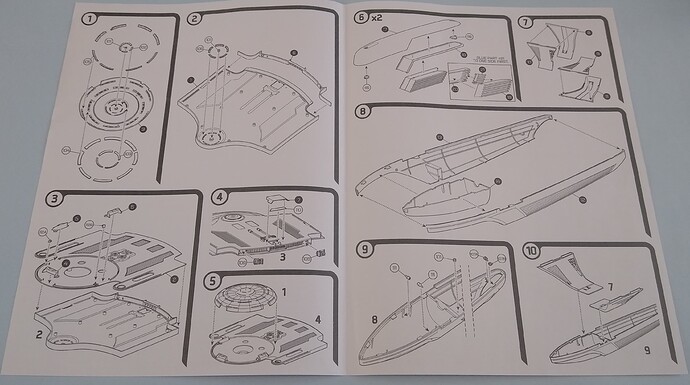 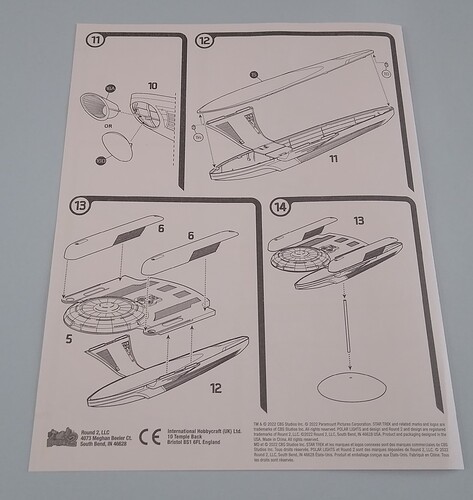 Decals come on a single A4 sheet. They look nice and sharp with good colour. As well as the alternative ship names and registries, you also get 2 different styles of Starfleet emblems for movie and TNG era ships. The Grissom studio model was reused quite a lot during the run of TNG and I believe also made an appearance in the DS9 pilot. 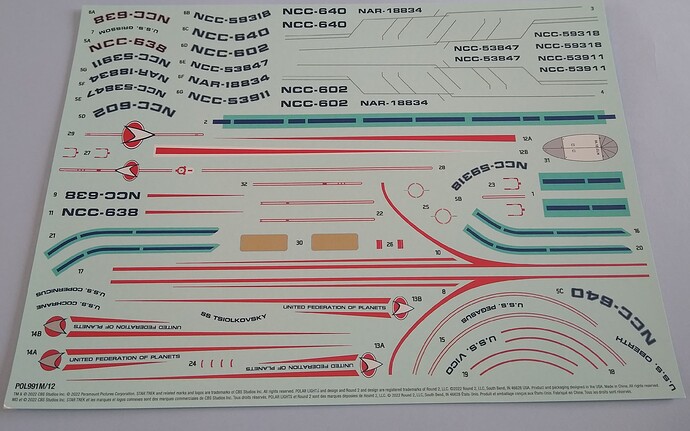 This is just my opinion, but I do think decals 3 and 4 (which wrap around the front and side of the warp nacelles) should have been infilled with that light blue colour to save the builder on a lot tricky making. Especially as this area is lacking the necessary panel details in the plastic parts.

A little bit of lazy cutting and pasting graphics from the Enterprise kit is apparent on the airlock decals. Look closely and you’ll see it reads ‘NCC-1701 ENTERPRISE’ 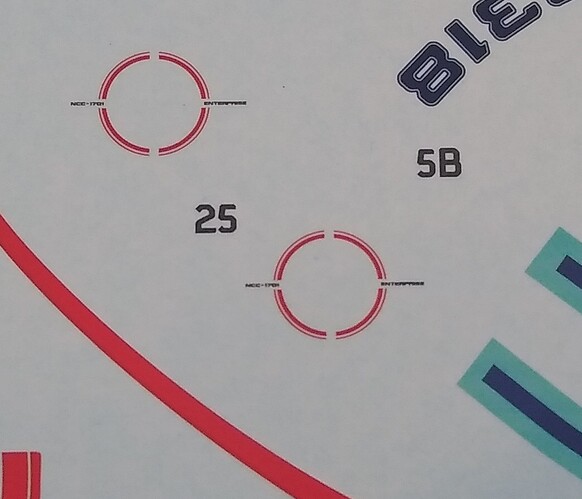 Besides from that little thing on the decals, it looks quite impressive so far.

But, there are a couple of things I’m not so impressed by.
Firstly, the strange lack of panel lining on some parts of the hull and nacelles. 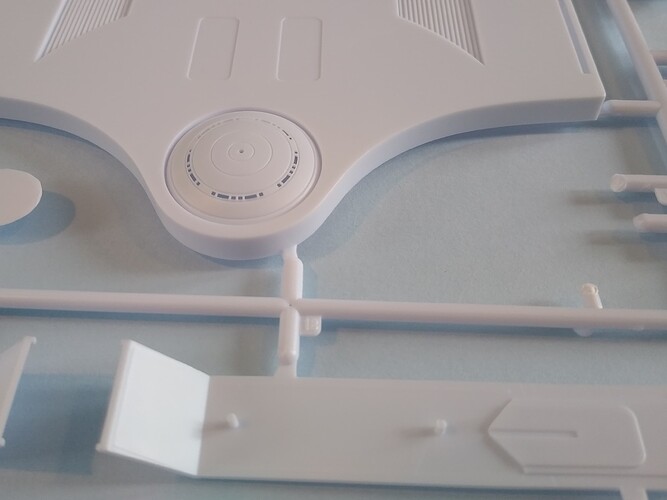 Besides from the grilles and tops of the nacelles, they’re completely smooth. The big problem with this is going to come in painting, because there are panels and lines that need painting in various Grey’s, blues and whites. With no lines on the hull to guide you, it’s going to be tricky to do. I also don’t like the missing vents on the forward section of the upper hull. Providing these as decals feels cheap considering the scale.

And I’m not a fan of the painting and decal guide printed around the bottom of the box. Yes it looks pretty from a presentation point, but not very convenient when you’re painting it. I would have preferred a larger fold out paper diagram like you used to get in the AMT Trek kits. That would have also helped in making the necessary panel masks.

These should in no way detract from the kit though. It’s just going to need to some careful thought and planning when it comes to painting.

Overall I do like this one, the Grissom makes for an interesting design compared to other Starfleet vessels. And it’s not too big either. I do have the 1/350 TMP Enterprise to build, but have nowhere to put the thing when built. The Grissom is much more manageable.

I’m looking forward to making a start on this one just as soon as I’ve finished a few things and have some space (no pun intended). I would submit it for the Sci-fi campaign build, but I have another kit in mind and I’m seriously considering putting some LED’s in it. Something I’ll have to research before I commit to that.

Hope this was of interest and benefit to anyone considering getting one.
Any questions, please ask.

Looks nice Stephen. I saw the wheels and speeder guns and chuckled … cheeky chaps throwing those in there

Always fun to spot things like that! It’s fairly obvious that the sensor pontoon was made from the hull from a big scale battleship. Probably one of the big Tamiya ships.

Hope my little review wasn’t too negative. The missing paneling just strikes me as being lazy. Especially as the lines that are there, are nicely done. Strange that they decided to skip the panels on the primary hull and nacelles.

No it was spot on, and no doubt very useful for others who are thinking of getting it. Its always good to see the box contents

Well that’s why I thought I would, not really seen much around online. There are a couple of builds on YouTube.

I might see if I can pick up the Tamiya masking sheets with the 1mm grid. Might help with the masking.

I’m still living in hope that they do the USS Stargazer one day. 1/1000 would probably be a good scale for that ship.