The past few days have seen me working at an experiment in what is fashionably known as “chipping” for showing harsh wear on a painted surface. I based this on a 1:1 scale M109A2 self-propelled howitzer parked next to the 40th Division headquarters building in Los Alamitos this past October. This tired warrior originally sported the three-color NATO camouflage, then was treated to an overall coat of CARC Tan for use in hot and sandy places. It changed hands across several units during its service life, like myself. Based on the faintly visible bumper markings, the final assignment was as a training aid for a regional maintenance and training unit.

The CARC is a very tough paint and rather than fade, it does wear off based on the terrain, and most importantly, the wear and tear as crew members climb all over it.

So, based on the service career of the M109, I purchased a Tamiya M109A2, which I believe was originally an Italeri kit; either way, well designed and reasonably detailed. No interior other than the howitzer breech, which isn’t worth the effort considering the utter bleakness of the rest of the interior.

The three-color scheme was applied and left to dry. I sealed with some Alclad to protect the camo paint from what followed. I misted on a layer of aerosol hair spray, let it dry, then shot a custom mix of Tamiya acrylic CARC Tan across the kit. After a very short time, it was time to see if this weathering technique of painting/removing with water was within my ability.

I used a mixture of brush types, plus distilled water, to gingerly begin attacking the edges and corners of the hull, figuring they would break down more quickly that the flat panels. Slow at first, and it seems that I had shot a thicker coat of the Tan than would have been prudent. A learning experience, as I said. So, a combination of scrubbing with a cut-down brush, more water, some places got a little X-20 thinner to break through the color barrier. A sanding twig and X-acto knife were used in places to encourage more chipping, in different styles. Golly, this was actually working!

My reading on this technique strongly suggested that this technique goes slowly, because of the potential to remove too much. For me, not a problem, as I was having to work much harder for the removal than I believe should have been the case. Again, this was my first time. Learning!

I found that, like the 1:1 scale item, the different base camo colors would present themselves through the CARC color, if done correctly.

Overall, I used a couple of thinned filter oil colors to mix up the presentation in select spots, worked on the one-piece tracks so that they would appear tired but still noticeable, a bit o’ pigments and enamel Track Color to show wear and tear. This vehicle is primarily constructed of aluminum, so the temptation is there to add shiny parts, but as this was a first attempt with chipping, I decided to forego the shiny stuff. I also dabbled a little with AK weathering pencils on the turret sides. Not bad, and I’ll try these again on future projects.

I cobbled together bumper markings for two units, a base unit that was almost 100% painted over, followed by a second unit marking which was about 60% covered over, showing the on-going change of ownership. The tactical markings on the hull sides were lightly dusted over to suggest worn paint, as were the front hull markings. The “RTMC” on the hull front suggests the last operators of this vehicles was a Regional Training and Maintenance unit in the California Army National Guard.

So, that’s it for this one. I’m attaching images of the completed build, as well as a few of the 1:1 item that this was based on. 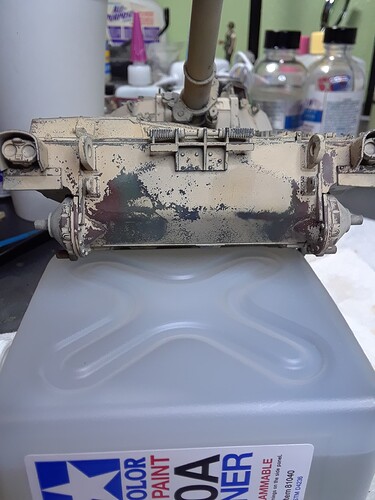 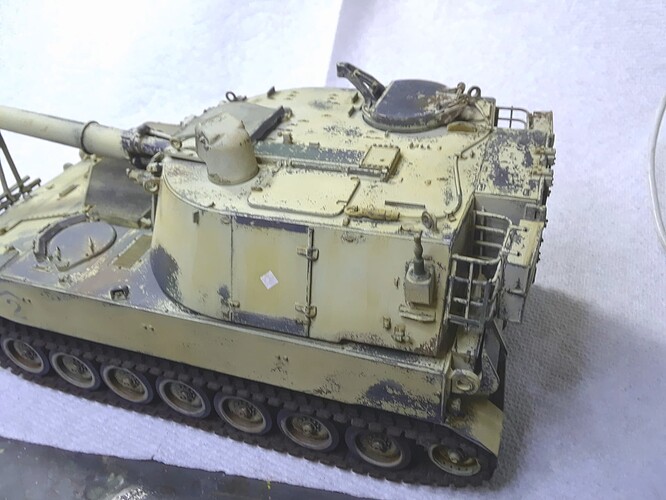 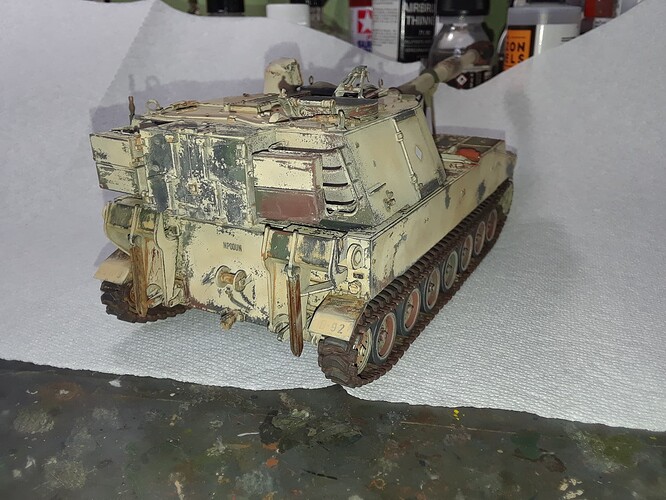 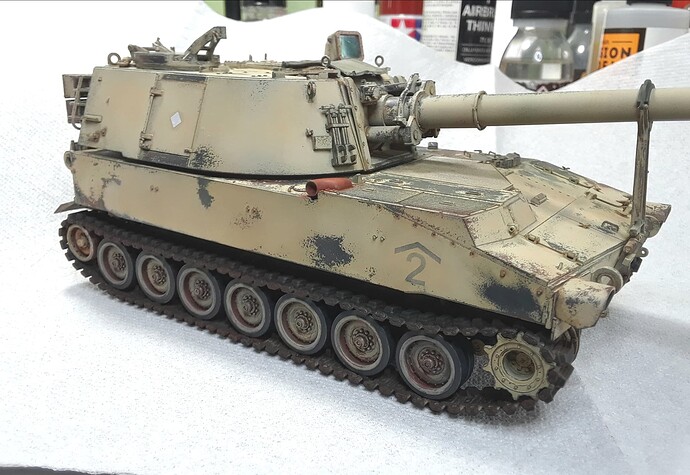 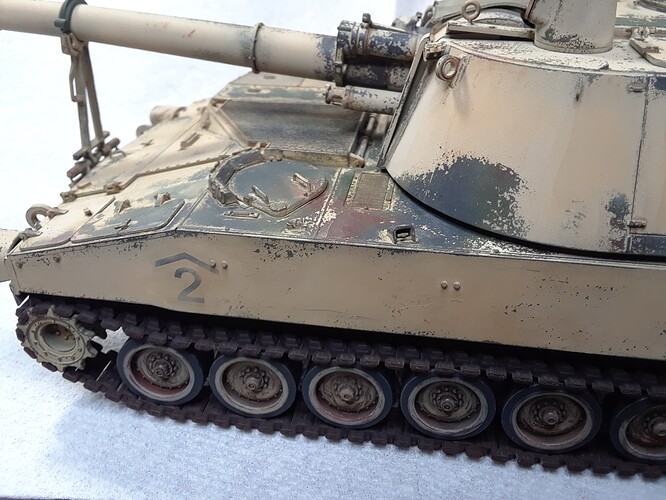 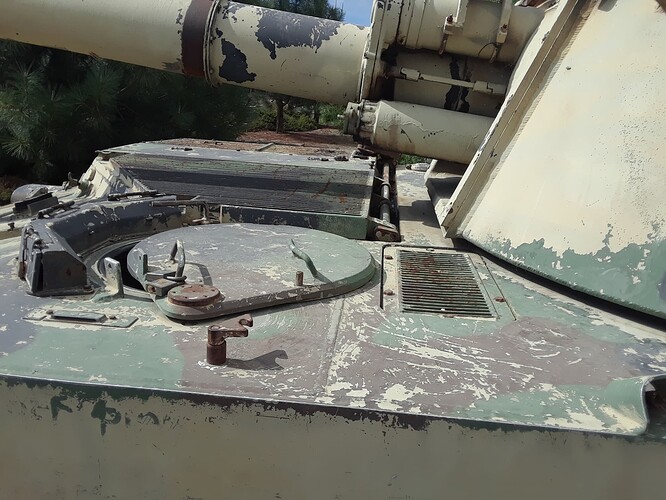 Very nicely done!
Had you taken close ups, and mixed them with close ups of the real thing, this would have been a nice Christmas puzzle

Gets my vote. That’s come out really great and the underlying areas the chipping reveals have some great tones.
Top work

Very realistic for an out of service vehicle.

On a side note, I doubt the sand paint on the actual M109A2 was CARC. Even over a very long period, CARC doesn’t really break down like that. It is really durable paint. It is actually not really a paint, but a two-part epoxy coating. The crap is so toxic that the tech applying it has to wear a full Tyvek suit with oxygen fed respirator. The fumes alone are carcinogenic.