I am looking to add some foliage to my Elefant tank build. I am thinking some tree branches on the upper glacias/forward fenders and casemate. I plan to do one in Italy. I have found some reference photos of elefants decked out in foliage so I have an idea of placement. I will research appropriate foliage for the area. I had two questions

There are a number of different products one can use for foliage. One of the best looking, IMHO, is dried plant called Teloxis Aristata, commonly known as Sea Foam.

These dried plants can be trimmed to size and painted as desired. Commonly used in model railroads, doll houses, as well as dioramas, it is available from a variety of vendors. It is rather pricey, however.

As far attachment to the vehicle, you are correct. If branches could not be wedged between onboard tools, etc., it was commonly wired on. Purpose-made foliage loops were welded on some vehicles as well, but I haven’t seen any used on an Elefant, mainly being seen on late-war vehicles like the Panther Ausf G, for example.

Look at model railroad foliage for options of foliage products. I used that stuff along with some Hudson Allen moss “pine boughs” on this Leopard 1A4 a few years back 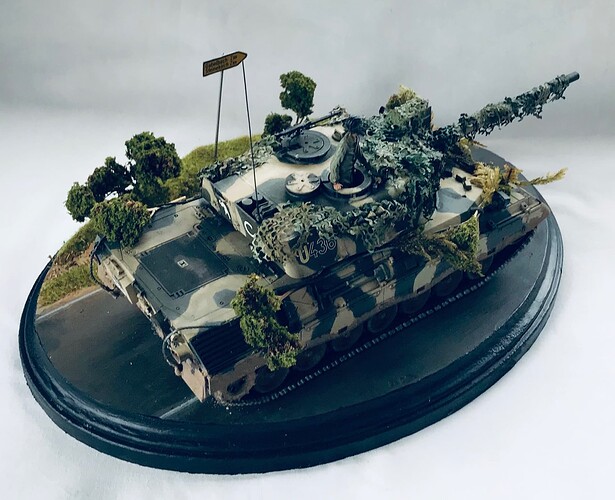 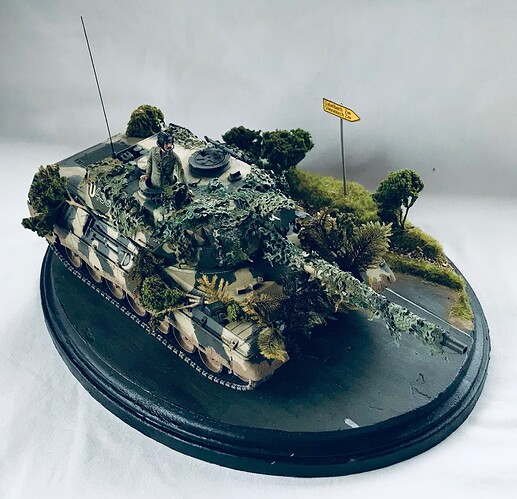 As far as how it was attached, often it will be placed into any part of the vehicle where it would not interfere with mechanical and weapons operations. Branches could be wedged into place between external stowage such as tool or tow cables, schurzen railing, spare track or road wheel mounts and brackets…. Some of it can be tied in place on gun barrels with cord, wire, etc.

Thanks! That stuff looks awesome! I found some for cheaper here but I don’t know how reputable they are. I’ll have to do some research 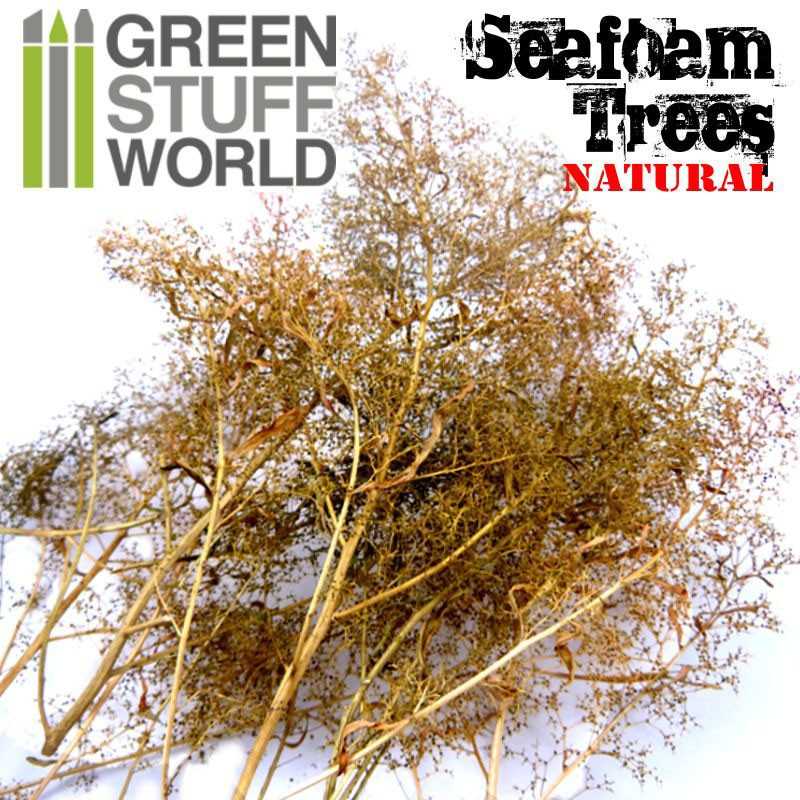 You might be able to get decent results using etched leaves from such as Aber for example. They do need a bit of work and I normally thicken up the “flatness” of the branches with Mr Dissolved Putty; they also require extensive twisting and even grouping/cementing together to ensure enough “mass” as it were.

Here’s a few shots of my MBT 70 and T64s using such a method; some of the images do betray the 2-dimensional aspect but those shots are those that are larger than the real thing in any case. You will get an effect of sorts, but it is laborious. 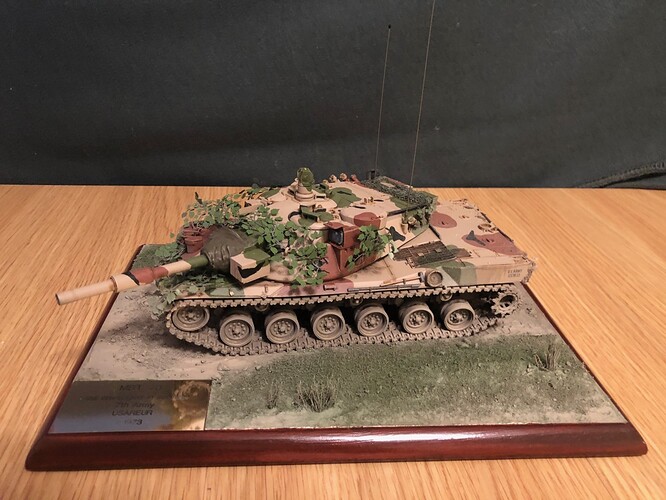 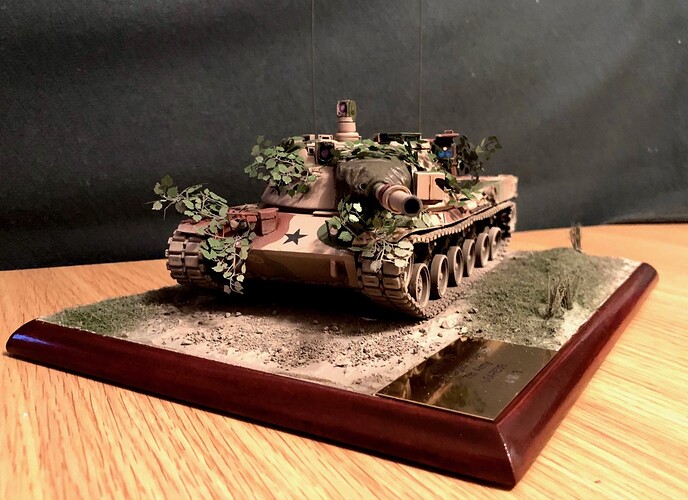 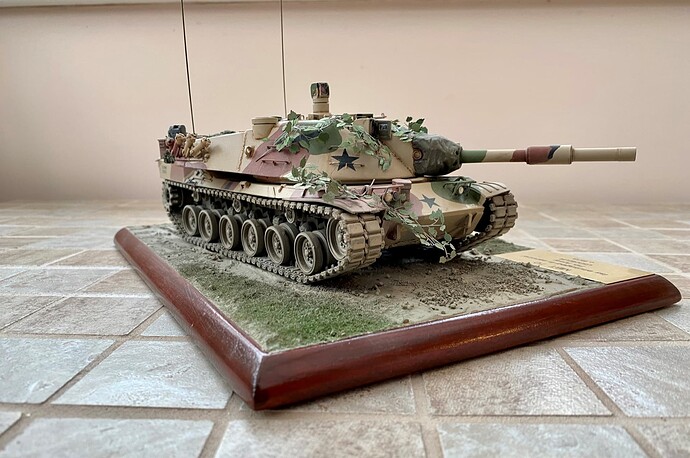 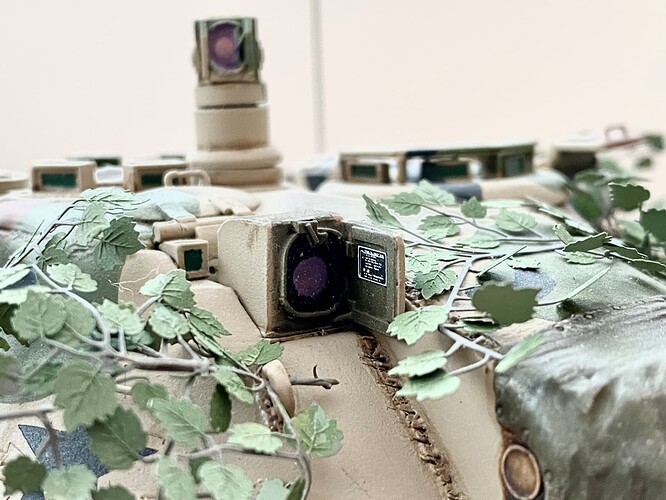 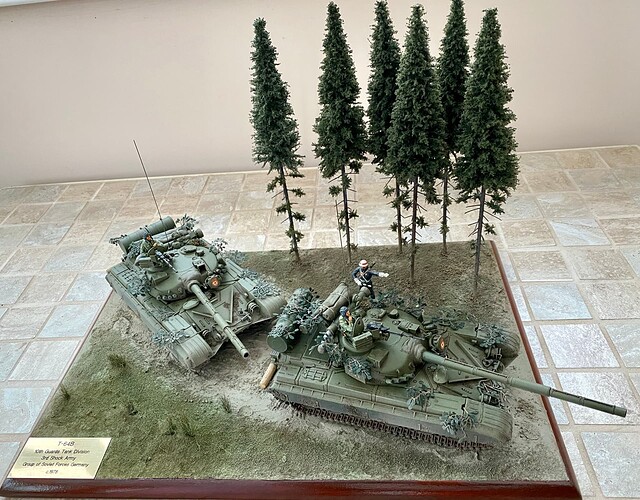 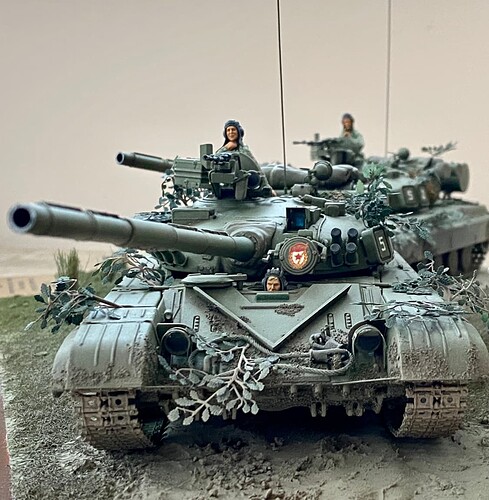 Some additional options and this work more for trees but can be used here. Pull a weed/tree sapling from the yard, shake off the debris, spray with hair spray and roll in a pile of Noch leaves.

The foliage from NOCH is ideal for creating model trees for the model railway. The foliage can also be used for dioramas. Discover it now at noch.com and recreate true-to-life model trees.

Look at the dried floral section at Michael’s/AC Moore or Hobby Lobby they have some sea foam looking plants (might even be the same, idk).

And they have other grasses and flowers that appear promising

Like Paska I use Sea foam a lot. It can be a bit pricey but it’s a sound investment and works well and looks good. Easy to use and can be sprayed with picture glue and then roughly sprinkle over green leaf scatter or railway scatter to vary it.

I went to the crafts and supplies store and used real Cyprus grass, and painted it. 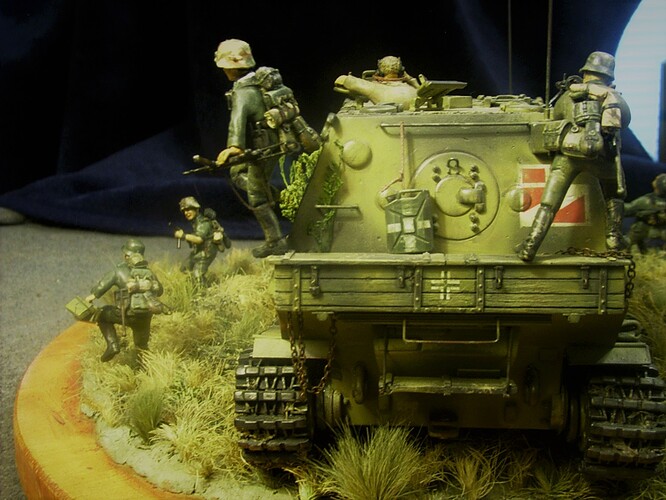 Etched brass leaves and branches on the old Tamiya Stug. 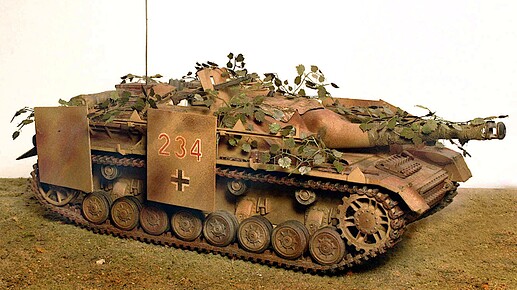 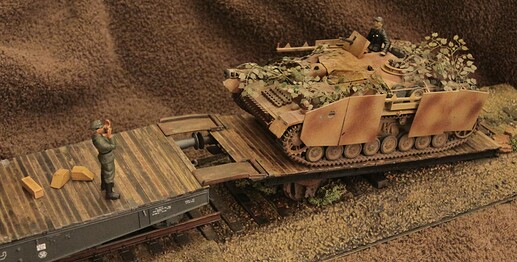 I painted the leaves in varying shades of green for some color modulation - the undersides of the leaves should be slightly lighter than their top surfaces as well. Also added a bit of stocking material tied around the gun barrel and a camo tent quarter over the gun mantlet to keep out the rain. (Painted wine bottle lead foil.) 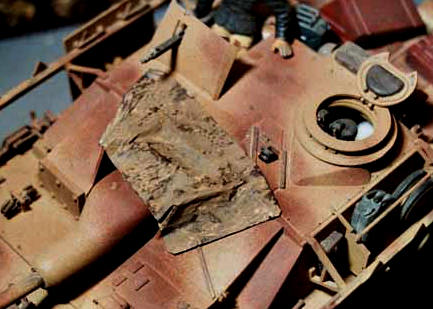 While similar in appearance to Teloxis, the Hobby Lobby product is actually Baby’s Breath (Gypsophila spp.). It has larger flowers, although this isn’t obvious from the photo due to lack of scale, trust me, it isn’t what you want. However, if you want a field of lettuce, spray the flowers green, cut them off the stems and plant them in rows, they’ll look great, otherwise continue your search for Teloxis or use one of the other products suggested here. I also use green painted Baby’s Breath for random bush-like weeds or add a small stem with colored bits in the middle of one to make a flowering plant.

Thanks for the save! I’ll keep my eye out

Another item, commonly packaged and sold commercially as tree leaves, but never identified, can be collected in the field, although one needs to be able to identify a birch tree. The common Paper Birch produces both male and female flowers on the same tree, called Catkins. The female Catkins hang vertically off the ends of the branches in the summer. By September, they start to disintegrate into small “nutlets”. These nutlets are the perfect size and shape to represent 1/35th scale tree leaves and are sold as such. But instead of wasting your cold, hard cash on a worthless bag of nutlets, you can go out and collect your own, unless you live in an area where said trees do not grow. These can be glued onto a grouping of tree roots and make fine tree branches, albeit it is a tedious process gluing individual leaves onto the branches. They also make great dead leaf scatter on your groundwork. 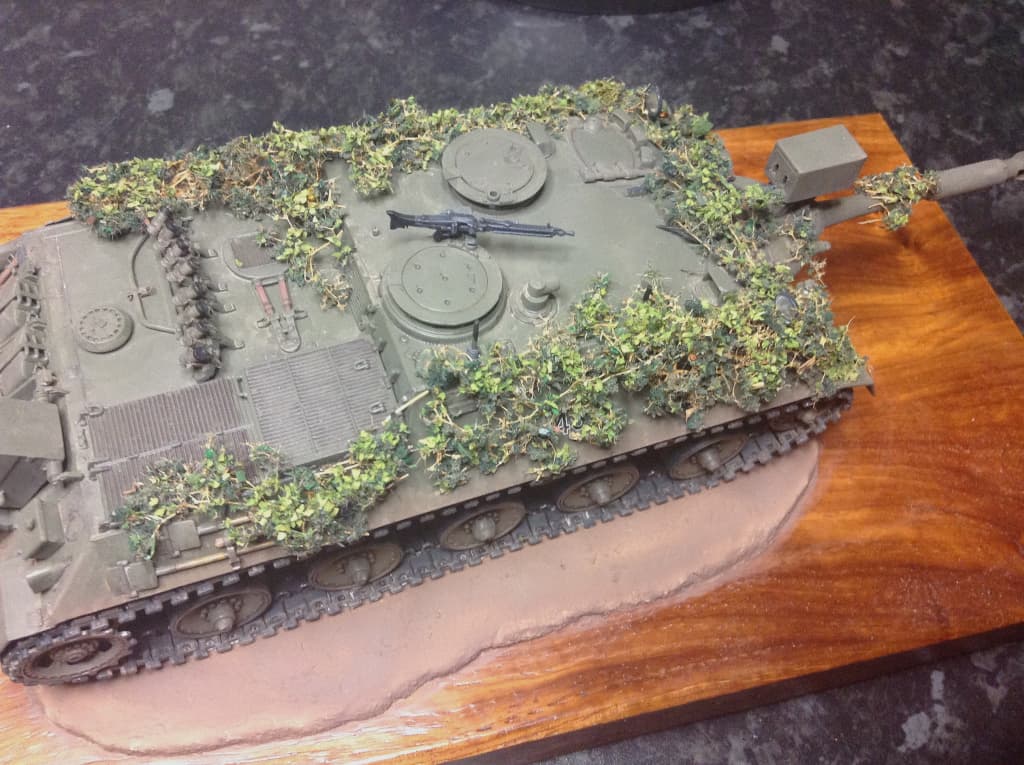 The Polak stuff is great as it is not one uniform colour and the Reality stuff bilks out with a different shade. 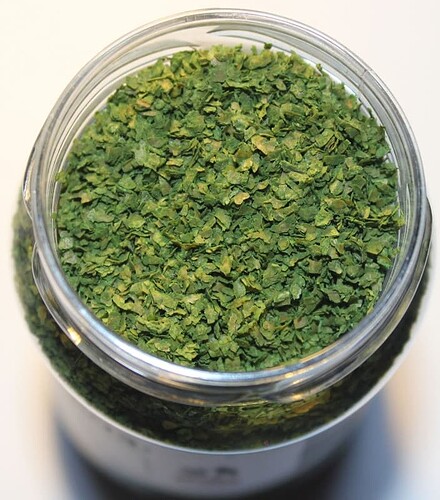 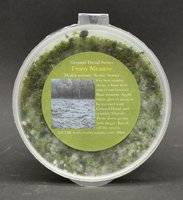 This is a new range of highly detailed Ground Scatters. It consists of 2 ranges: 1. Ground Base: this is a base for your grondwork available in light, medium or dark brown. The idea is to use any of the 3 Ground Base products as the basis for your...

I’m with Peter on this. Sea Foam with punched paper “scatter” leaves work quite well. 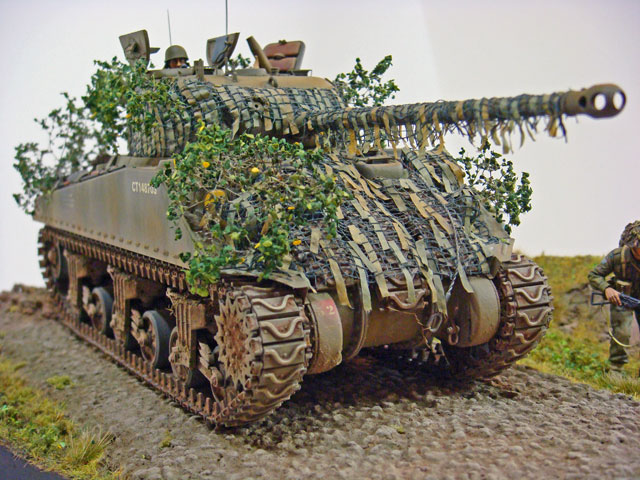 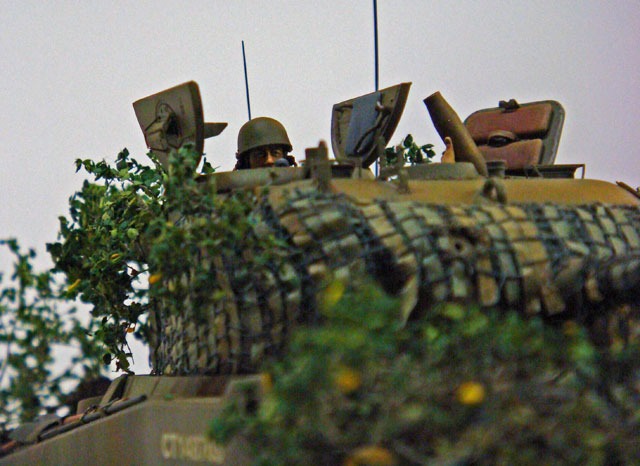 I’m in danger of over-egging the pudding here but here are a few views of an NVA T-72 with a mix of camouflage types; I’ve used etched leaves, paintbrush bristles and real plants (moss) to try and get that fully camouflaged look. The inspiration was from a picture in this book, showing some T-72s fully scrimmed up barrelling along a track. 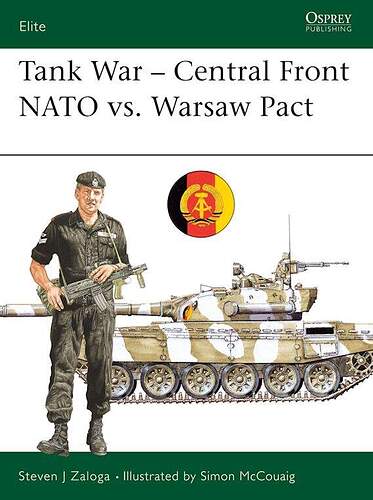 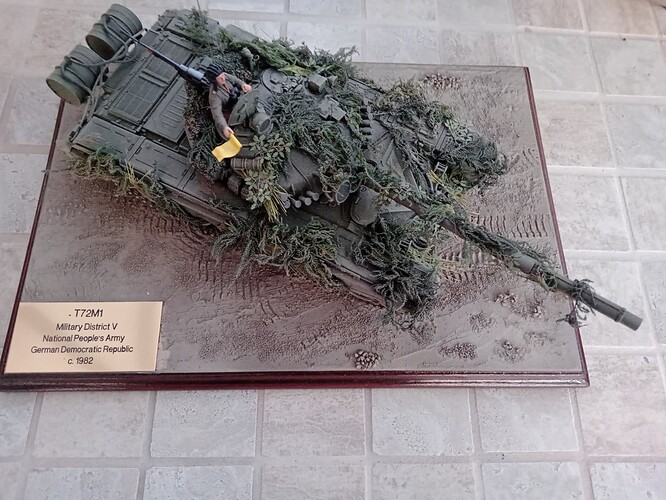 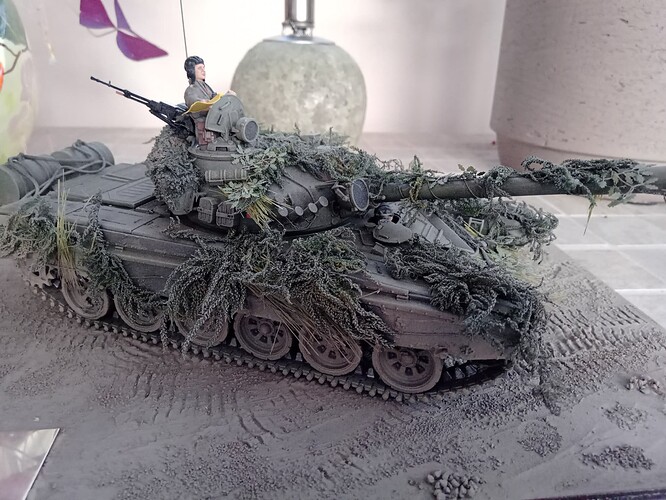 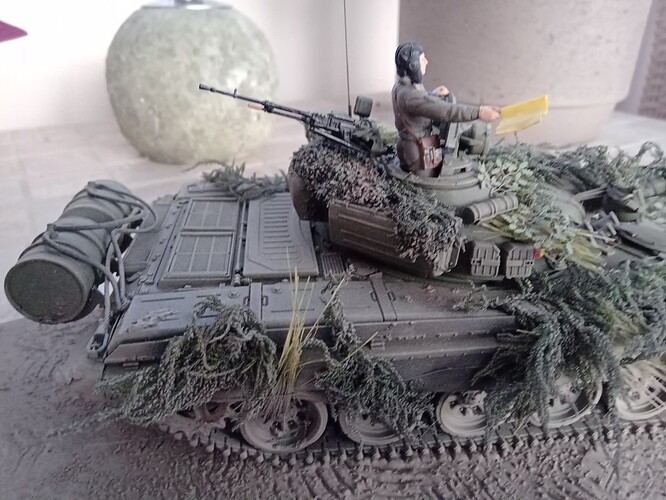 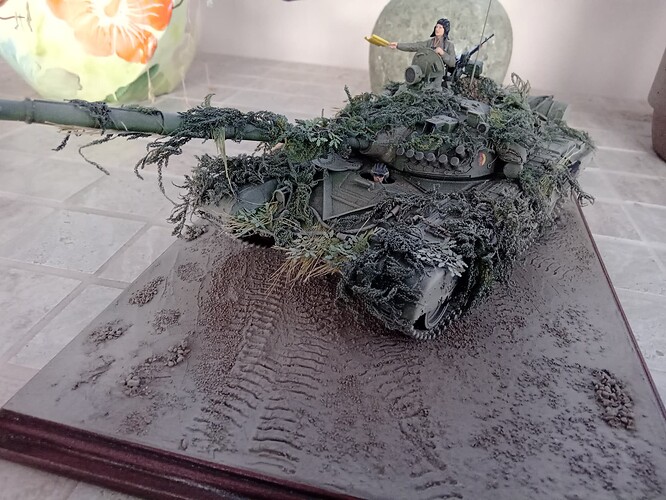 I used stretched sprue to depict the wires along the hull sides then just glued the camouflage material onto that. I was hoping the moss would depict something akin to fir branches but upon the application of paint it just curled up, however, I obtained an effect. I believe the answer when using real plants is to process them using diluted glycerine; I plan to try this at some time in the future

Beauty Michael! Similar affect I want on my Elefant. It’ll be one from the Anzio area so early summer Italian foliage is what I aim for

I’ve used sea foam and would add my voice that’s a really good option. Versatile as well as can be cut to size for foliage as per your needs, or small bushes or even trees. You can as others have suggested add noch, leaves, scatter etc or leave bare like I did for the finer branches on my winter tree below. I could’ve individually glued some of the leaves onto the sea foam. However probably too time consuming for a large tree, but wouldn’t necessarily be so for smaller foliage branches. 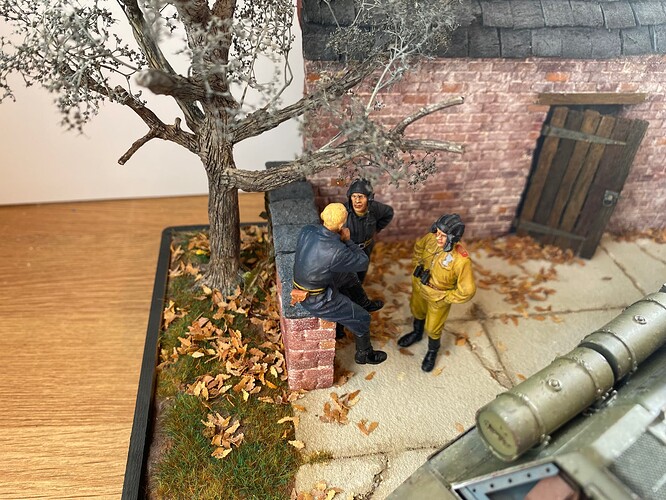