I have a three part question:
First is , I have miniarts Dingo MK II with the decals for a sPz Abt 503 in France summer of 1944 would it be safe to say that they were exclusively using the King Tiger Porsche tanks as well as some Tiger I’s? I ask because i would like to do a diorama using the the Dingo MK II with a German crew talking with a Tiger crew.

Second question is, the painting for the figures show them in a pea dot camo, wouldn’t that have been exclusively for a Waffen SS formation or would Wehrmacht crews have worn this camo as well?

Third question is the painting instructions call for it to be in a panzer grey, wouldn’t it have been a tri tone color in 1944?

would it be safe to say that they were exclusively using the King Tiger Porsche tanks as well as some Tiger I’s?

The information I have says yes to this. And they would be in tri-color camo.
I am not sure on the uniforms.
Ken

During the Normandy Campaign, the 503rd had one company of King Tigers, and the Second and Third Companies had Tiger ! tanks. The King Tigers were comprised of two Production Turret (“Henschel”) vehicles, and 12 early turret (“Porsche”) vehicles. They were coated with Zimmerit and camouflaged by the unit using spray guns. They did not yet have spare track links on the turrets. In August, the 3rd Company turned over their remaining Tiger ! tanks to 2nd Company, and went to Mailly Le Camps, east of Paris, to receive 14 new King Tigers. The Normandy front collapsed while they were gone, and they attempted to rejoin their battalion, but were waylaid by a local general, who assigned them to support a Luftwaffe Field Division. The battalion lost all of its tanks during the Normandy Breakout, except for two “Porsche” tanks, that broke down at Mailly le Camps during a photo op for the newsreels. They were recovered and rejoined the unit when it was re-equipped with new King Tigers at Paderborn in September. The unit went to Hungary and spent the rest of the war in the east. Photos of the unit’s tank crews in Normandy, and later in Budapest, show black wool Panzer Uniforms.

@tankerken thank you for the information! I was looking for a few pictures of the dingo and only thing that came close was one that apparently Whitmann had ridden in while accompanying his tiger. Unfortunately I couldn’t distinguish any color pattern on the Dingo.

@geraldowens thank you for the clarification on the Tigers, i didn’t realize that they had Two Henschel turrets in the battalion as well. I was aware of the Tiger I and Porsche variant. that was very informative , I was worried that i would end up building a Porsche Tiger with the dingo and that the two vehicles wouldn’t have crossed each other. Also, thank you for clarifying the uniforms!

By historical accident, the Army 503rd was the most photographed of all the King Tiger battalions. There are pictures of them painting their tanks in Normandy, pictures of British POWs employed to shuttle supplies around their forest laager, photos and film of the 3rd Company on the firing range at Mailly Le Camps, more films of them parading for the cameras at Paderborn in September, and photos of the 2nd Company helping restore the pro-Nazi government in Budapest after an abortive coup in October. These are the official images that are seen in nearly all the tank books. “Tigers in Combat, Volume 1” by Wolfgang Schneider fills out the story with numerous personal snapshots, and includes partial unit diaries and strength tables. The original hardbound edition is amazing, but ridiculously expensive, now. The paperback reprint by Stackpole is inferior, but cheap, and far better than nothing. The book is divided into chapters for each unit, so you can follow marking and cammo practices over time.

@geraldowens Ibhave seen some of the photos of the attempt to restore the Pro Nazi government in Hungary with Otto skorzenys paratroopers. I’ve never seen the pictures from Normandy with the British pows though. Any chance there’s a picture of them using a Daimler dingo MK II and if it was in a panzer grey or a three color camoflauge scheme?

You may find it in this book 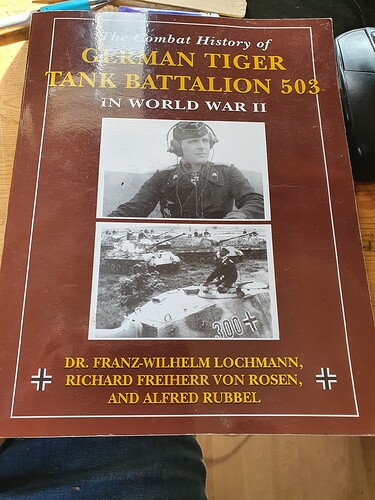 This is one of them I believe (filched from the www) - showing the POWs: 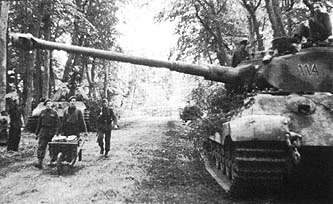 I think there’s a couple of others around as part of a series taken that day.

@Panzerfloor thank you for the reference/ source, gonna need to get a copy of that book.

@BootsDMS thank you for the picture it helps a lot, can definitely see the tri color pattern on the tiger. Now if i can only find a picture with a dingo in it too!