This is my Fuchs NBC-Verkenningsvoertuig of the Multi Role Engineer Company, 11 Armoured Engineering Bataljon, Royal Netherlands Army. I used the Revell 1:35 Fuchs ABC, and converted it to a Dutch vehicle using 3D printed parts. I also added 3D printed wheels, and an interior set from MR Models. And as the finishing touch, I decided to include a figure of a Dutch soldier with NBC gear, because I think it looks cool 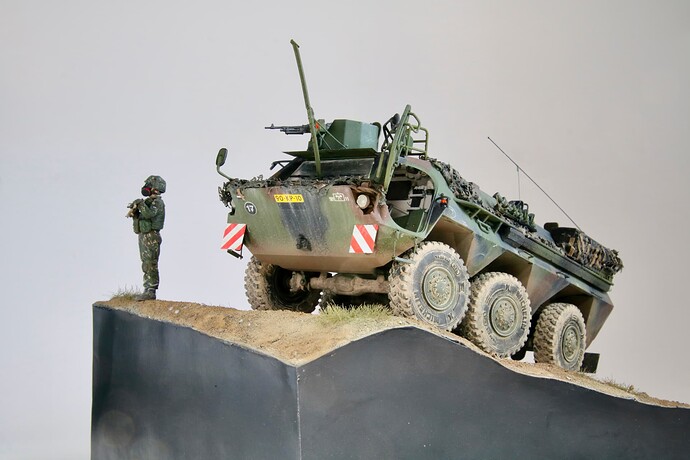 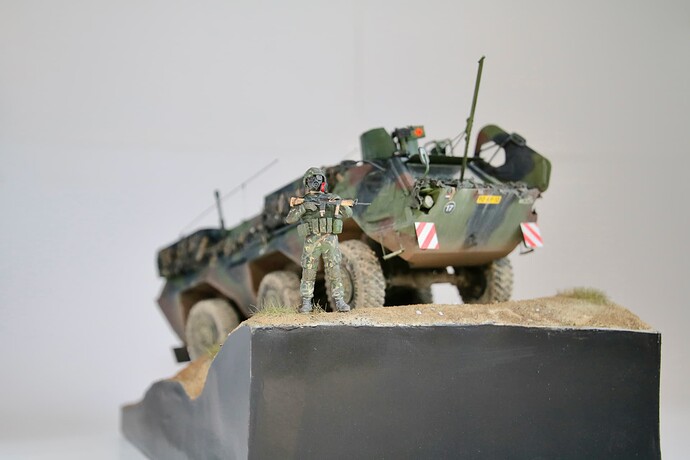 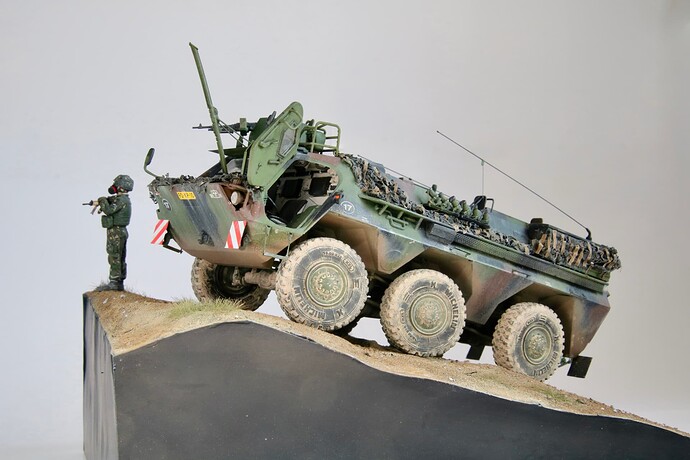 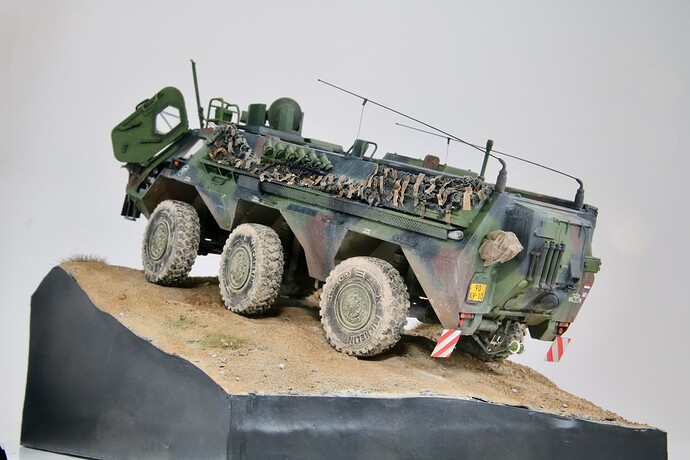 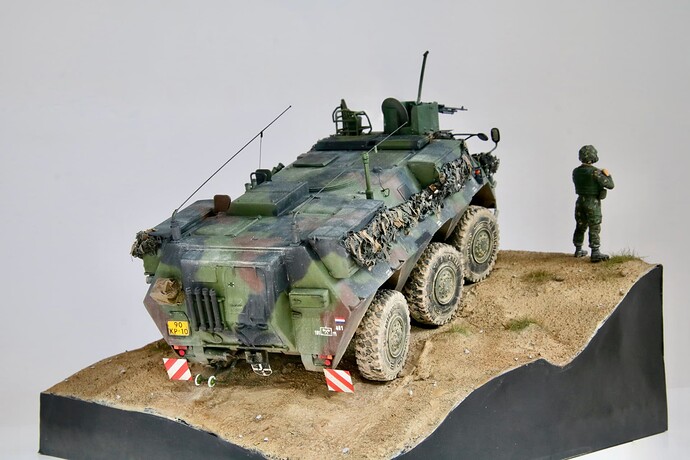 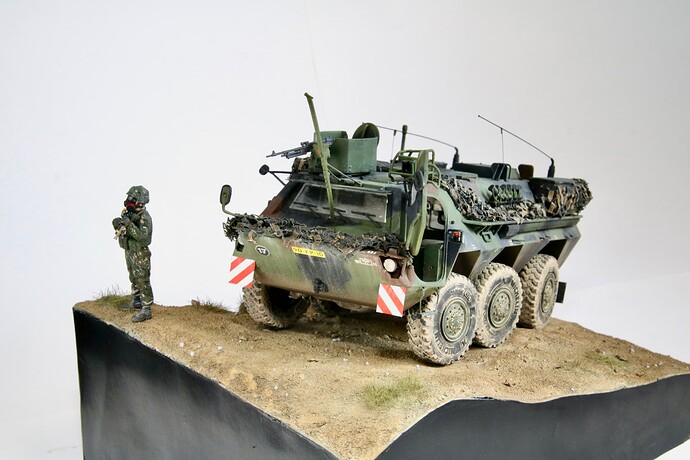 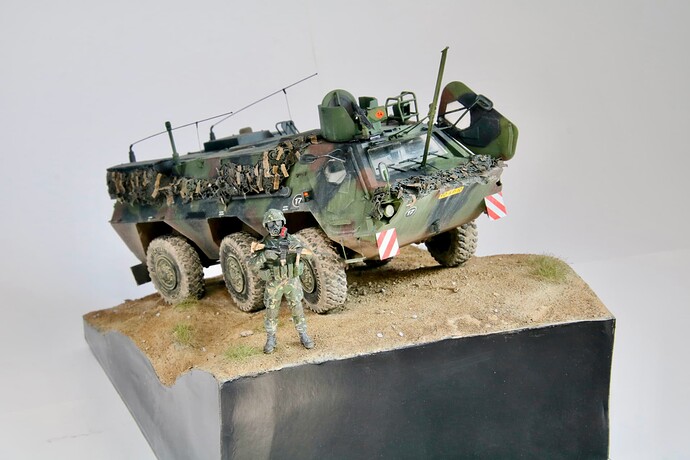 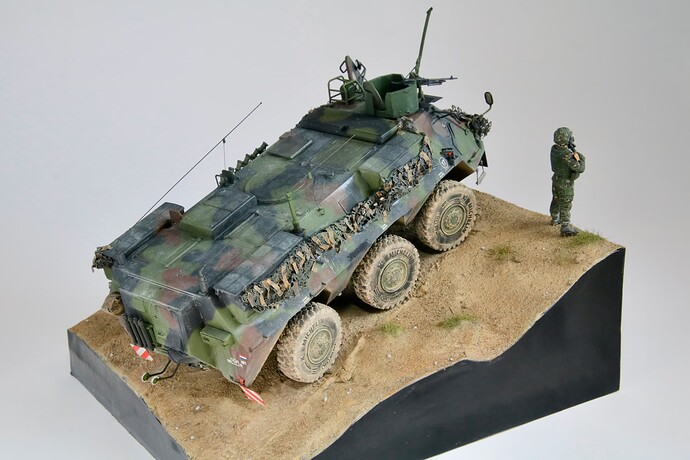 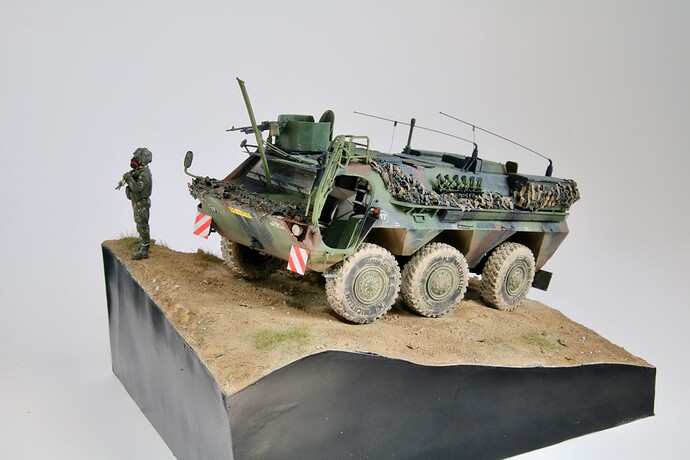 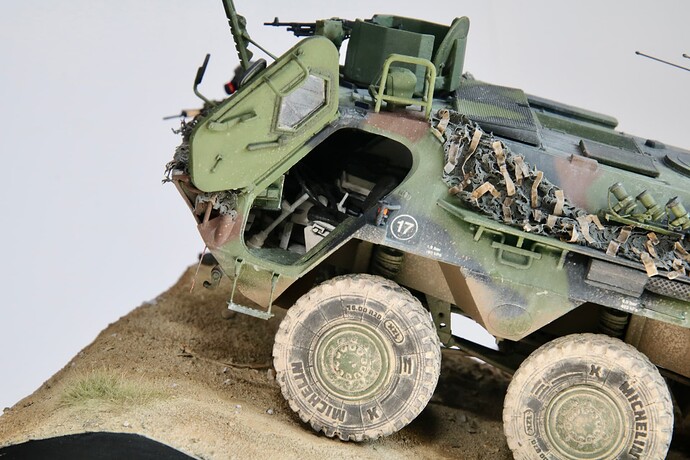 Very nice. Great finish and the figure is a good addition

It does indeed look cool - we don’t get enough figures in NBC gear in my opinion, and it takes time to convert. Cracking model all round Jasper.

It looks great and the subject choice is also great!

The Fuchs has been ignored by model companies and it has so many variants and seen so much use from various countries.

Excellent job all around. Everything looks great

Thanks for the kind words! It is indeed quite difficult to find figures in NBC gear. I made this one with a 3D printed gas mask on a Master Box figure. 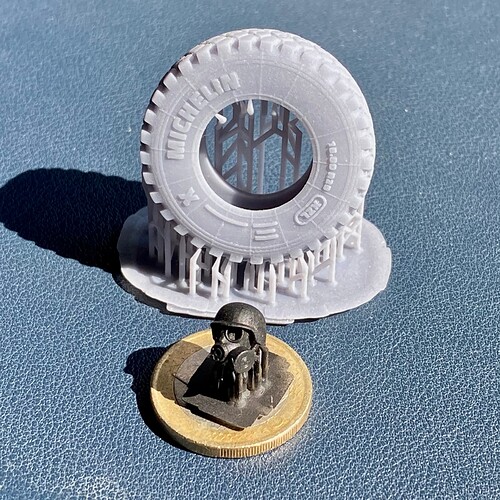 Nicely done. The weathering on the tires and undersides of the vehicle are excellent. Love the figure in the protective mask.

A cracking little vignette. Really interesting angle to display it at and look into it as well. I particularly like the camo netting, the tied down antennas and the wires on the smoke grenade launchers.
I don’t suppose you took some photos on the interior before you closed it up?

Thank you! I didn’t, but I can try to make some if you want. I expected it to be more visible through the open door, but the visibility is only limited unfortunately

Awesome built ! I like a lot your dusted rendering and the position on the diorama base.
Dutch versions are not common in 1:35 scale.

Doors look better with visible windows. I have also made them like this on my Bundeswehr Fuchs A6A1 NBC.

Congrats for this brilliant model !

Well if you can manage to get a couple of shots of the interior that’d be great. But I know how difficult it can be to get a decent angle once an interior is closed up so I understand if you can’t get any more angles than you’ve managed already.

Did you make something different on the interior or used it as it is provided ?

Nice subject matter. I have not seen many of these vehicle builds. You’ve done great and like the 3D tires.

Thank you very much! Dutch vehicles in general are not common in 1:35 scale, while they have some interesting variants in service. Do you have any pictures of your A6A1 Fuchs? That is one of the newer versions isn’t it? I also like the look of those.

I used the interior as it came in the conversion set. I couldn’t find any major differences between the actual interior and the MR Modellbau set, although I must admit only had a few pictures of the real interior to work with.

Oh no ! The A6 is an old version already used 20 years ago. I believe latest versions are A8 and if I am right, A9 versions are in project.

Ok I will make a separate subject to avoid a mix with your built.

Fuchs doors can be locked in the open position.