You’ve probably seen them in Hobby Lobby and wondered who in the world would buy these old kits. Well that would be me.
Treat it with a little TLC and you’ll be rewarded with a pretty nice build, even if it is older than you are. 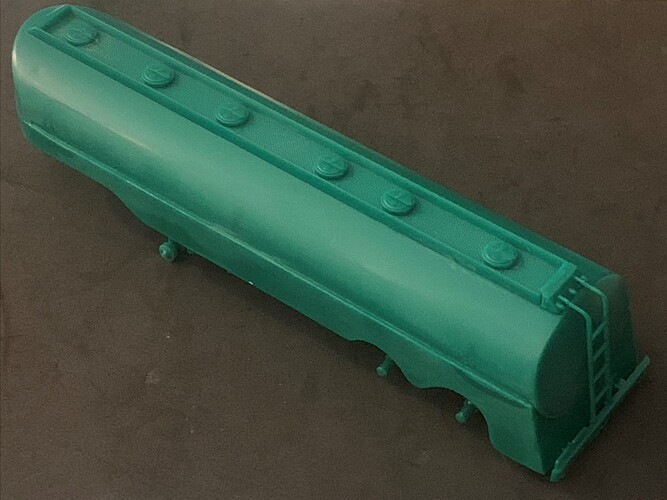 All the trailer needs are some resin or rubber wheels.
Actually the wheels are nicely done. The tires need tread around them - not easily captured with injection molding. 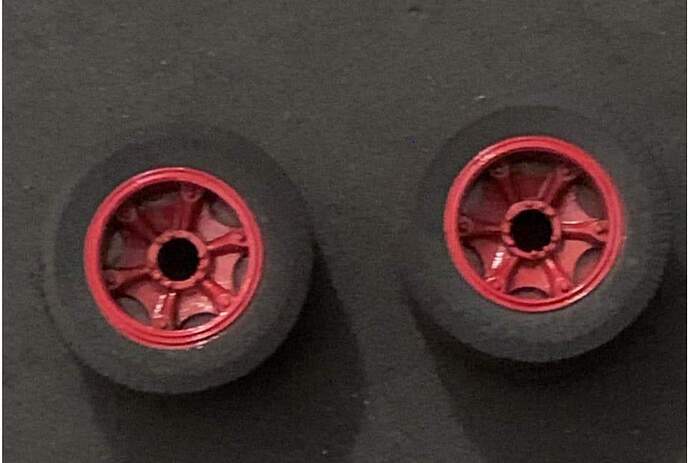 But the purpose of this thread was to see if the old Revell/Atlantis kit could be built into this:

I believe it can.

The first thing I’d do is cut the rear of the tank at the same angle as in the photo: 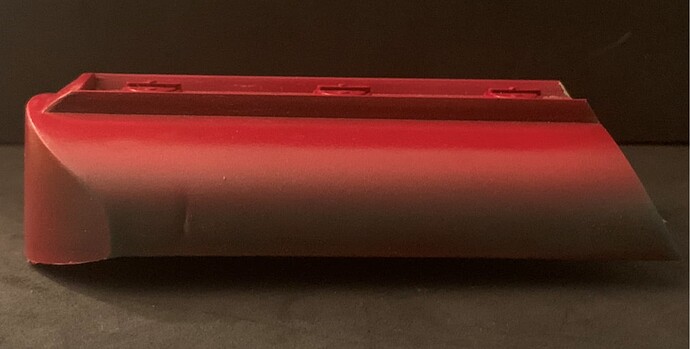 That was easy enough.
Note the sink hole where the locating pin is. There are three large ones on each side of the upper tank that need to be dealt with. By the way, this is not meant to represent the final length. I’m still just fooling around at this point.

I’ll start working on this for real after I finish another little project. That project involves flattening the convex tank end from this: 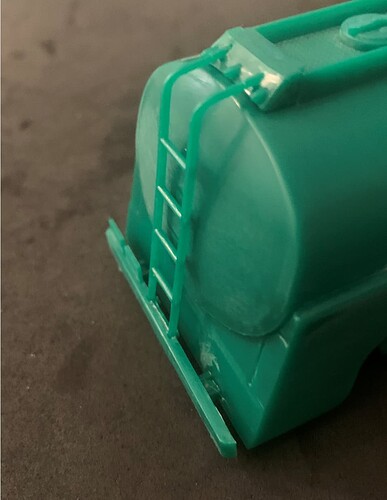 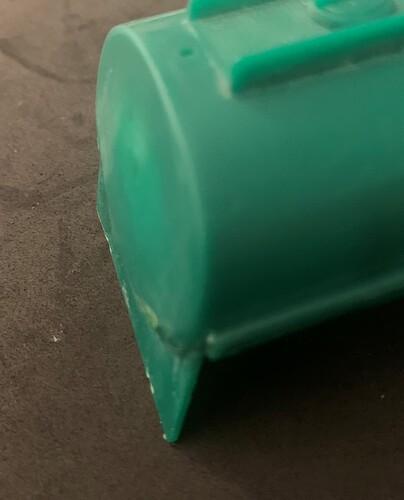 This project already had the correctly angled rear, so just need to add some filler: 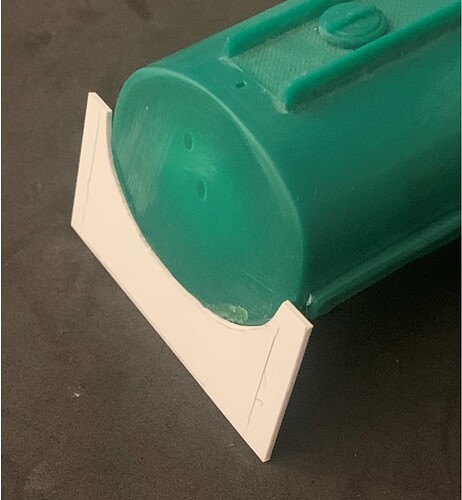 I’ve lengthened the frame on the standard cab, just as the White Motor Company did back in the day. 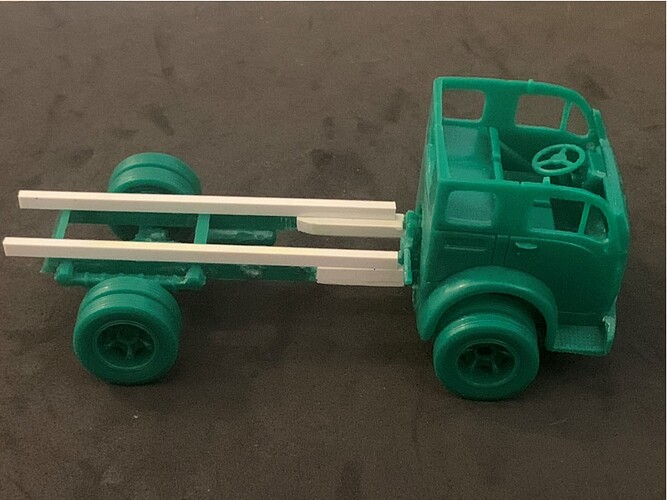 I didn’t quite have the correct sized Evergreen so I had to sort of cobble smaller pieces together. I’m not worried about the appearance of the joints as pump equipment will hide the right side and a fuel tank will hide the left. I scribed wood grain on the top rails but it will be barely visible once everything is in place. 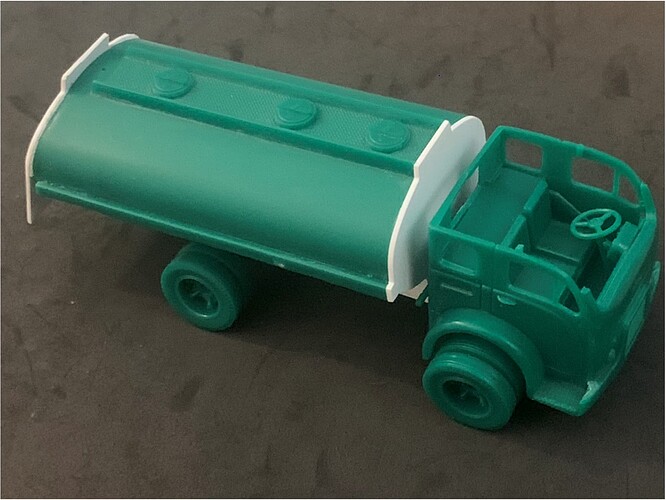 Rarely does the Good Idea Fairy visit at 3:00 in the afternoon, or even 8:00 in the evening. No, in this case it was half past midnight. Couldn’t sleep anyway. I decided to open the rear compartment and add some pump equipment. It might have been a bit easier if I’d made that decision from the start. 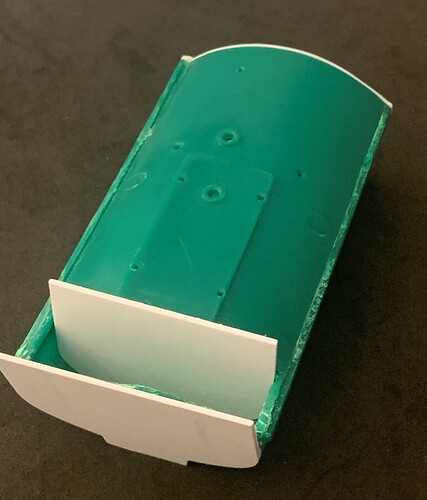 NyQuill is good for that …LOL

You’ve probably seen them in Hobby Lobby and wondered who in the world would buy these old kits. Well that would be me.

I am one of those fellas too. I bought that kit back in April.

I am one of those fellas too. I bought that kit back in April.

Let’s see what you can do with it!

Modeling had to take a back seat to 1:1 projects for a bit. Time to start culling the herd… 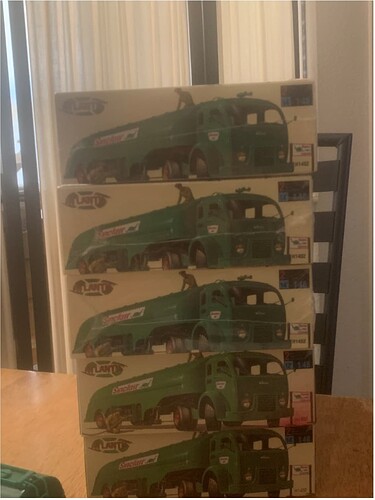 The cool thing about these old kits - they were very well detailed for their time, and they can be converted to so many different trailer types seen back then. I’ll definitely be doing an F1 and possibly an F2.
The skirts can be modified to fit a whole slew of different styles by cutting them away or adding to them. 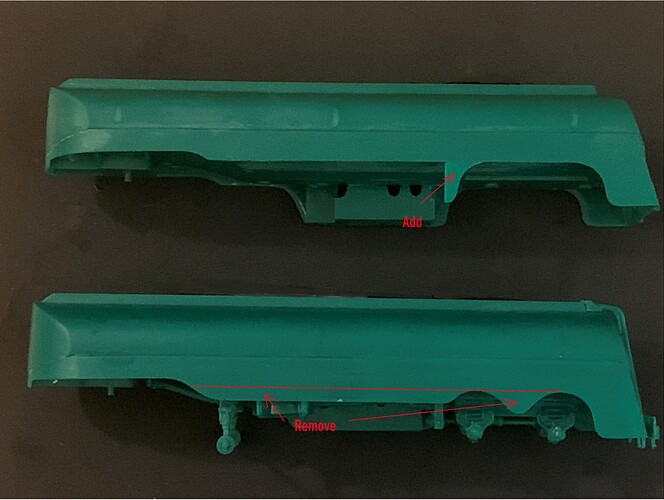 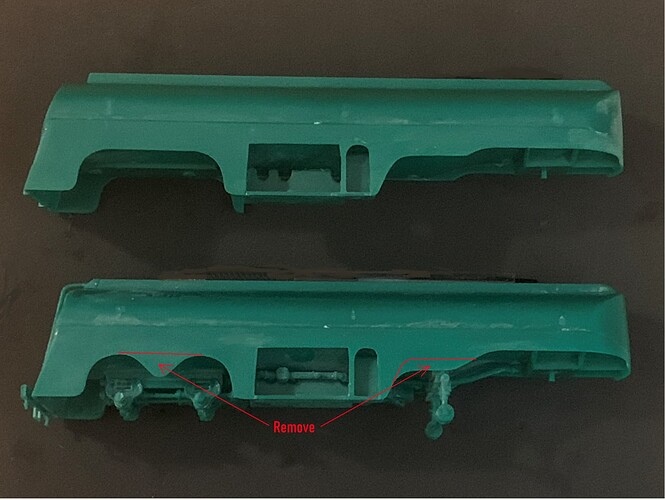 On the OOB version I just need to retract the landing gear a bit by removing part of the struts. They’re too low for travelling and too high to display the trailer by itself. An easy fix.

Well, including the old Revell version, that I just had to have for the decals, I’m up to seven of these. More progress soon on not one, but two other trailers. 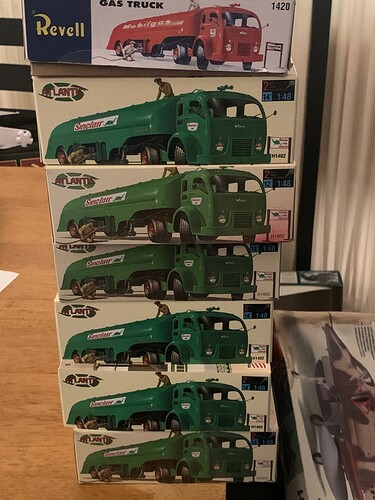 Looking forward to progress shots of the work being done.

“A few dies ago I saw a vehicle that’d haul that tanka.”

So the next project requires something other than the White 3000 tractor. Bring on its older brother, the 666.
That’s 6 ton 6x6. 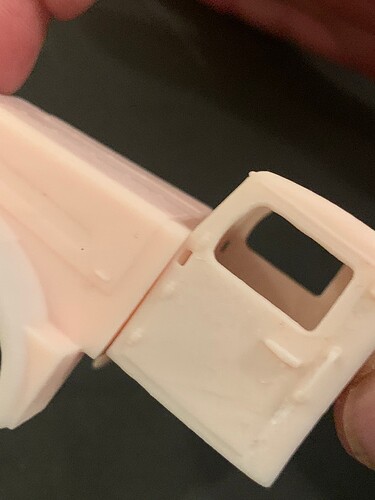 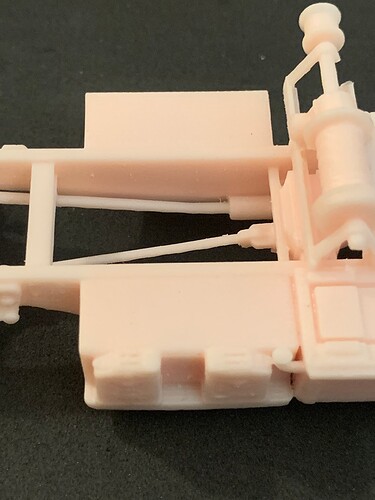 The entire chassis to include the suspension and drive train is all one 3D printed piece. Simply amazing. Of course there were a lot of attachment points.

There are the wheels of course, and then the three piece cab - the shell, the hood, and the floor with interior. The steering wheel and controls were all printed in place. Again, amazing stuff. 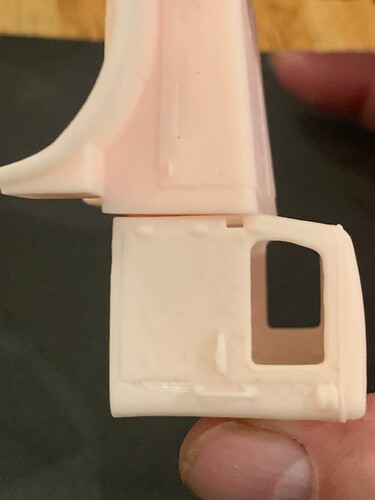 I’m missing a photo on my phone. I’ll add it later when I continue the thread.

“A few dies ago I saw a vehicle that’d haul that tanka.”

That 666 looks like a lot of fun as well, a really tough looking rig! 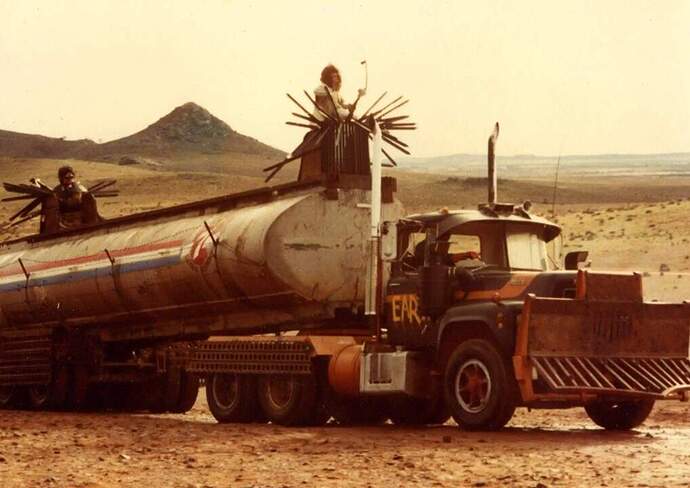 Definitely a classic. I can’t wait to see how this turns out.

I was only borrowing the quote from that movie. But as interesting as that is, I’m actually involved in a several year long process of building the War Rig from the latest Mad Max movie Fury Road, in 1/32.

I just meant I’ll need a rig to haul the next of the 1/48 tankas. Hint: tanka plural.

Finally getting back to the bench after a dry spell. The trailer several posts up that I was altering the skirts on will replicate this one that I stumbled upon online: 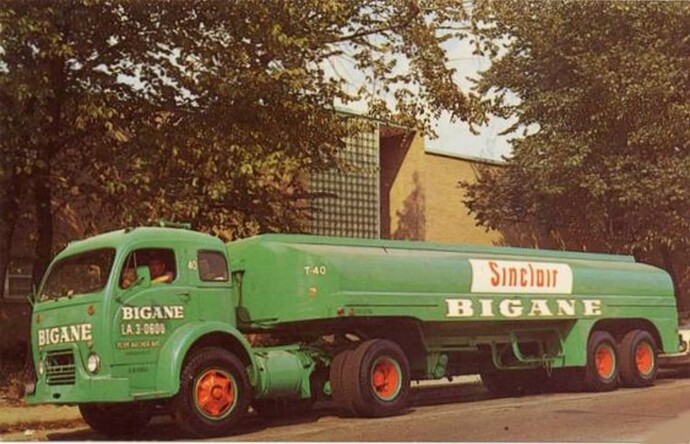 I have the appropriate Gothic Railroad Lettering in various sizes, but couldn’t read some of the writing on the cab. Turns out Bigane still exists - since 1907! The CEO of the company had the original photo in her office. Now I know what the smallest white lettering is - their street address. And below that in black - Chicago, Il.
Now I just need to scratch that round gas tank on the cab and add some brake reservoir detail to the trailer and it’ll be ready for paint.

I made a lot of progress on my ancient Revell set as well. I rebuilt the doors on the trailer. I thinned them considerably and added braces and lips all the way around. There’s a tiny bit of orange peeling in the paint but I can buff that out. I also thinned out the skirts from the inside to give them a more scale appearance. 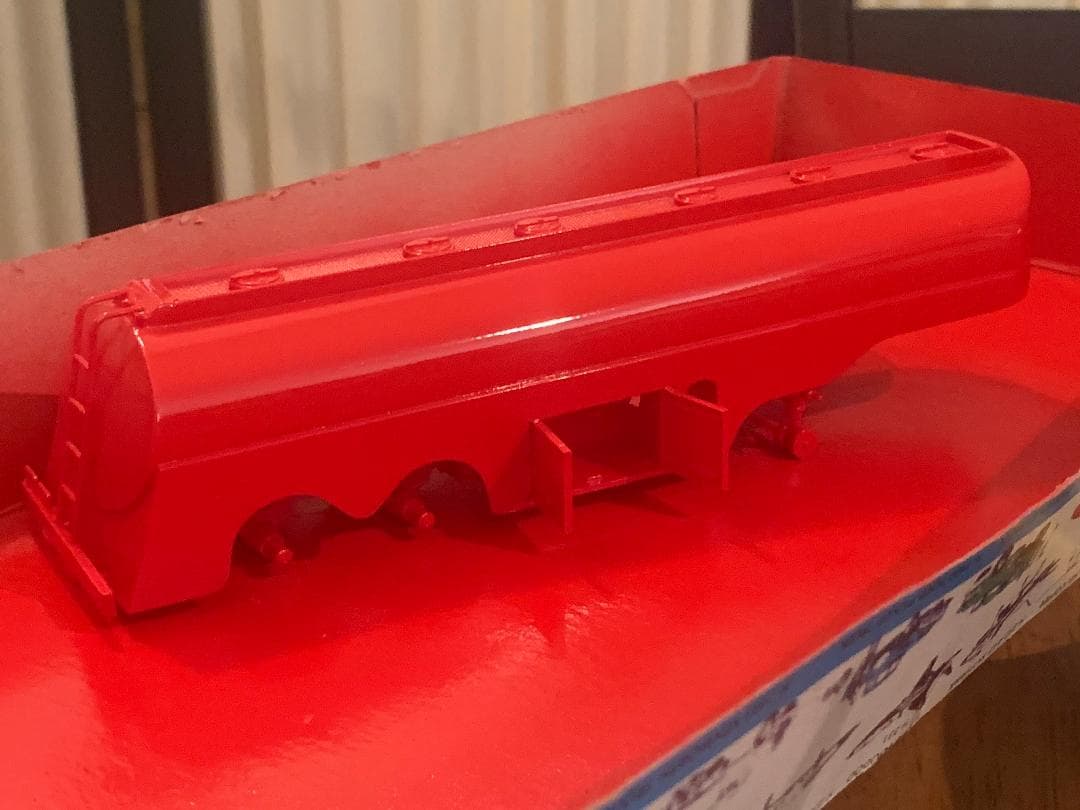 I sure hope those decals are still good.

Such a cool project here, loving your work!

Love this project! Only sorry I did not think of it myself!

Almost done with the Mobil Truck and the good idea fairy struck again. I’ve removed some skirting above the wheels. Similar to one of the others in the that regard, but far different in another. I don’t want any two kits to be the same, and not just different paint jobs either. Sanded out the orange peel as well. More to come. 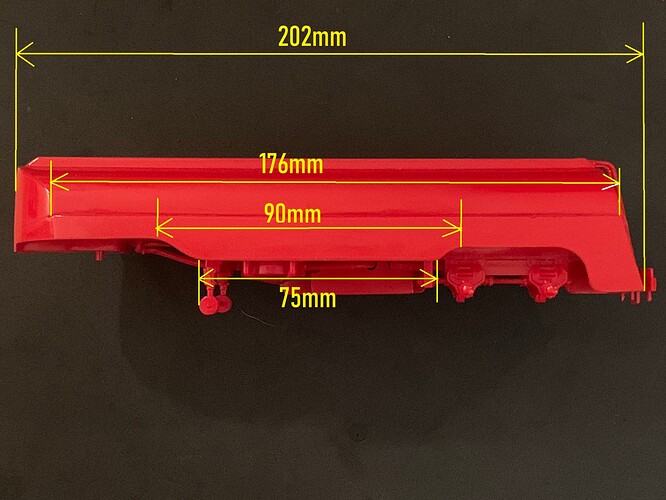 Cool little (and old) subject. will be good to see how it all builds up and with the mod’s you introduce Rob