Continuing with the theme of equipment used in recent conflicts, Gecko Models will be releasing a 1/35 scale model of M400W Light Type III Skid Steer Loader as currently used by the US Army. 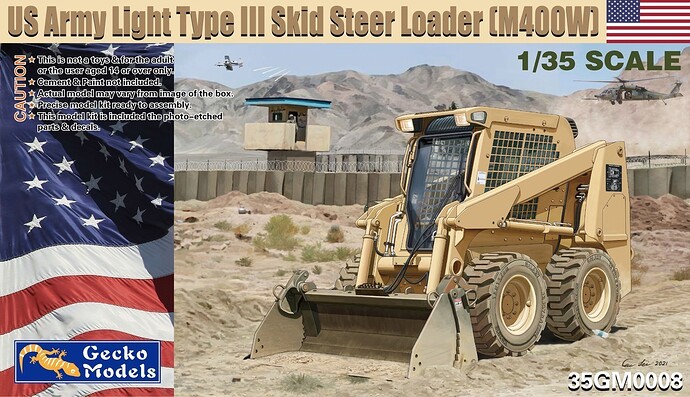 Gecko are bringing out some interesting kits.

Lots of non-military options with this one too. Really interesting and very useful.

I won’t be surprised in the least if Gecko also releases a version with the tracks.

Fantastic choice by Gecko. It’s equivalent to a Case 420 Series III so, as noted, it can be used for civilian version with some modifications like removing the rear lifting points, rear upper tiedowns and bucket tiedowns. M400T tracked version would be great, since I don’t think a tracked skid steer has every been done in 1/35 (short of perhaps a diecast) in resin, plastic, 3d or otherwise.

Of course, this comes right after I purchased the HD Models 3D print skid steer. At least it’s a different model - a Bobcat S250!

One more to the wishlist…

Will look good on the flatrack of a M1120 HEMTT LHS.

After checking photos on DVIDS, I hope for the tracked version, too. Plus a set of forks to use the vehicle as a forklift.

HD Models offers a set of forks. While designed for their own Bobcat S250, would probably work for the Gecko Case as well. And when it comes to skid steer attachments, there are many “aftermarket” manufacturers of attachments, so forks don’t have to be “Case”. And the quick attach feature to change implements is also very similar on most makes of skid steers.

Hi Jon,
thanks for the tip with HD Models, they have some interesting products. Of course I hope that Gecko Models will produce the tracked Case and the forklift in styrene.

Have you built the Hasagawa 1/35 excavator or teir front end loader. Hop Geko can bring some dumpers to light.