Tamiya’s Gen. George Patton from the old generals set in 1:35.

This figure would not be complete without the addition of his dog.
I do alot of scratch building but never tried sculpting so here is my
attempt at creating Patton’s dog, an English bull terrier named Willie,
from bits of scrap plastic and a lot of filing.
Need to create the legs and tail, yet.
And once done, need to adjust Patton’s left arm and paint stars on the helmet.
Hope you enjoy, 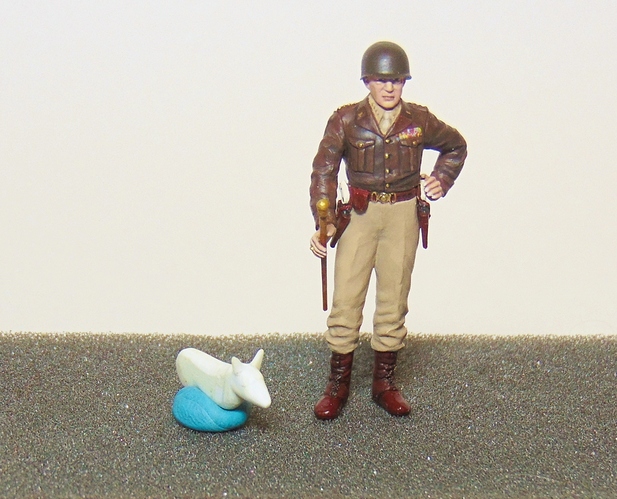 Actually looks to be the right shape of head and ears. Looking forward to seeing more of Willie!

Thanks for looking in.
I have looked at many pictures and will try to get the dog looking as close as possible to the real Willie.
Cheers,

“Only a pimp would carry a pearl handled revolver.”

Hi 18bravo,
Thanks for looking in and the reference to the"pearl handles" …did some further
reading on that Patton statement…you learn something new everyday!
Thanks again and have a great day.

Cracking model Joe; I don’t know if this helps or not but your project reminded me of a passage in Carlo D’Este’s biography; I quote it at length just to set it all in context. This is the recollection of the US Army war correspondent (and cartoonist) Bill Maudlin upon meeting Patton for the first time:

*“There he sat, big as life even at that distance. His hair was silver, his face was pink, his collar and shoulders glittered with more stars than I ever could count, his fingers sparkled with rings, and an incredible mass of ribbons started around desktop level and spread upward in a flood over his chest to the very top of his shoulder, as if preparing to march down his back too. His face was rugged, with an odd, strangely shapeless outline; his eyes were pale, almost colourless, with a choleric bulge. His small, compressed mouth was sharply downturned at the corners, with a lower lip which suggested a pouting child as much as a no-nonsense martinet. It was a welcome, rather human touch. beside him, lying in a big chair, was Willie, the bull terrier. If ever dog was suited to master this one was. Willie had his beloved boss’s expression and lacked only the ribbons and stars. I stood in that door staring into the four meanest eyes I’d ever seen.”

From memory I can only name a few actors in the movie Patton. Obviously George C. Scott would be one of them. But ever since I was a kid I’ve always remembered the name of the dog who played Willy. Apparently he is now considered an actor:

Thanks again for all the additional info.
Have a great day!

He was enough of an actor to be listed in the credits!
Ken.