At which point did the German Army’s uniform trousers change from a slate-grey colour to
the grey-green matching the jacket? From what I recall, it was sometime during the Blitzkrieg era …

Was that ever something for real, or just something model companies showed us on box art?

This is an original WWII color photo from the 1940 campaign 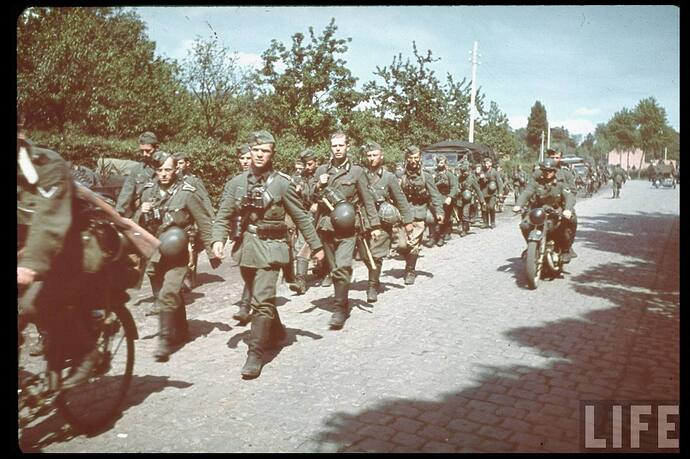 For the most part, aside from the 4th guy back on the right column, it’s pretty uniform or any differences are hard to distinguish.

I have several books on German uniforms, (although by no means an exhaustive collection), and I’m not seeing any mention of a formal switch in the trousers’ color. However, I did find the following passage, taken from page 8 of German Military Combat Dress, 1939-1945:

“On some formal occasions in the 1939-40 period it was possible to see units parading in the field grey service tunic worn with the grey parade dress trousers, but parade dress as such was not issued after the outbreak of war and is beyond the scope of this book.”

Sad to say I’m resorting to Wikipedia for this: 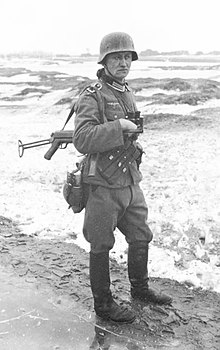 Originally the M1936 tunic was worn with the same stone gray (steingrau) trousers that the Reichswehr had introduced in 1922. These were high-waisted, straight legged, button-fly trousers with suspenders (braces) and three internal pockets plus a watch-pocket; in the field they were worn tucked into [jackboots](Jackboot - Wikipedia

In 1940 contractors were ordered to discontinue the manufacture of steingrau fabric and instead produce trousers from the same feldgrau cloth as the tunic; however Army depots continued to issue existing stocks and the older dark trousers were still frequently seen until around 1942.

From the War Department Technical Manual Handbook on German Military Forces we read:
“Until 1943, full field trousers of the same field-grey material as the field uniform coat were issued to the German Army”. Seems somewhat contradictory to the above statements.

You have to be careful with the US War Department manuals. Firstly, of course, they are based on the study of captured personnel and are going to date from after the US entered the War in December 1941. They also have numerous inaccuracies, often due to misinterpretation of information received. This is true of all data obtained during war conditions on the “other side”, of course, not just US manuals.
Under the circumstances, I tend to fall back on established and trusted research. Firstly, I turned to Brian Leigh Davis’s “German Army Uniforms and Insignia, 1933-1945”. It’s an old book but is exhaustively researched and set a standard for uniform volumes back in the 1970s. However, he makes no real mention of the grey as opposed to field grey trousers, merely noting the trousers matched the jacket. A more recent volume in the Haynes series, “The German Infantryman” by Simon Forty, notes “The trousers that accompanied the Feldbluse were of a slate grey (steingrau) colour in the M36 version, but this was changed to field grey to match the rest of the uniform in 1940”. Numerous colour photographs in the book show models wearing mix and match jackets and trousers, where the latter are plain grey. Another source I use a lot is Andrew Mollo’s “Uniforms of the SS” series, especially Volume 6 on the Waffen SS. Mollo bases his pronouncements on the SS-Verordnungsblatt, the official SS bulletins, so they can be taken as the expected official view (infringements are possible and noted where relevant). Obviously, the SS used a lot of similar or identical clothing to the Wehrmacht. In the section on trousers, Mollo notes the 1937 SS Feldhose were identical to the 1935 (M36) army model and were at first manufactured in new-grey cloth, but from 1939 matched the jacket. Finally, in Jean de Lagarde’s “German Soldiers of World War Two”, which despite the title shows all three services, plus the Waffen SS and police, pages 10-12 show an early war infantryman in plain grey trousers. This book uses original equipment and clothing worn by models to give large, clear photographs.
I do have numerous other books on German WW2 Dress, but this is a small cross section.
The conclusion I reach from this reading is that the plain grey trousers were pre-War issue, retained by those regulars issued with them, or possibly still retained in unit stores and issued to early recruits. So certainly, in the early Blitzkrieg years, it was very likely to see a colour mismatch between jackets and trousers, a situation that evolved steadily from 1940 on.

Thanks to you all for your informative responses.
While there is still some doubt as to the use of the
slate-grey coloured trousers, the consensus appears
to be that they were occasionally worn during the early
months of the war. 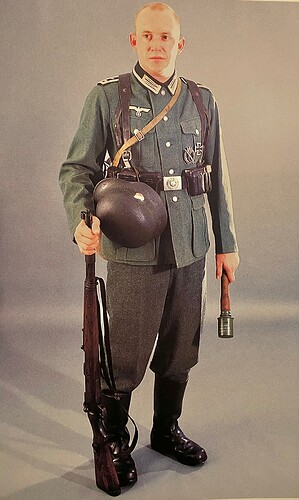 This image illustrates the uniform in question, from German Army Uniforms of WWII in Color Photographs. I forgot that I even had this book.

The text also confirms the 1940 cut-off date of the trouser’s manufacture.
I know that the War Dept manual is a dated reference to say the least. I throw in counterpoints sometimes just to illustrate that not all references are created equal.