Just about every figure company makes a German machine-gun team (MG-34, or 42) with the No. 1 firing the gun resting on the No. 2’s shoulder, while the No.2 is steadying the gun by grabbing the bipod. Either standing, or kneeling. How often was this actually practiced? Must have been a real headache (literally) for the No.2 having a machine-gun firing inches from his ear!

Common enough that there’s pictures of it.
It’s the first image that pops up if you search WWII German Machine gun tactics. Toss in MG42 shoulder fire or buddy fire and a bunch more pop up.

I tired looking for a training publication, but I can’t find any that are free to view.

I’m with you on the noise factor though.

Not only the noise, but the heat coming off of the gun also…ouch!

There were pictures of it doesn’t mean it was used often though.

We have to remember that taking picture was not something that they can take casually. Many pictures of the time was staged for various purposes. If you check the surrounding of these machinegun on mate’s shoulder pictures, it was quite peaceful.

These machinegun has harsh recoil that I doubt the biological bipod could hold for long. These biological bipods may also correct themselves against the shooter’s will and lead to other problems.

And that’s why there were so many Deaf German machine gunners after the War. That is if they survived the War! 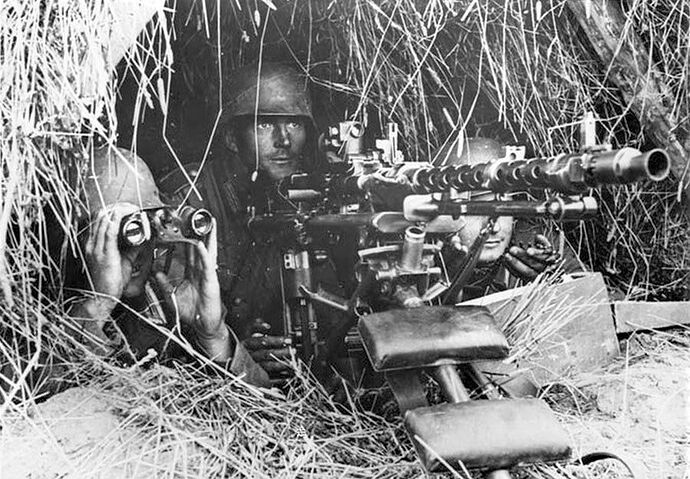 That’s what I thought…some, or most (if not all) were photos taken in training exercises, and for propaganda purposes.