Managed to lay my hands of this photo of an M48 at Guantanamo Bay. To me the tank number looks to be yellow. Looks the same shade as the USMC and S/N on the hull. Looking for verification by some of you guys that are better at this than I. Side question, I notice the Vietnam decal sheets show the tank number was repeated on the engine deck. Was this a Vietnam thing ,by regt., or USMC wide? Last, any leads on who makes letter/number decals that would be correct for 60s vintage USMC tanks. (Star / Bison make sets for Vietnam service but only have letters for A,B,and C co.) 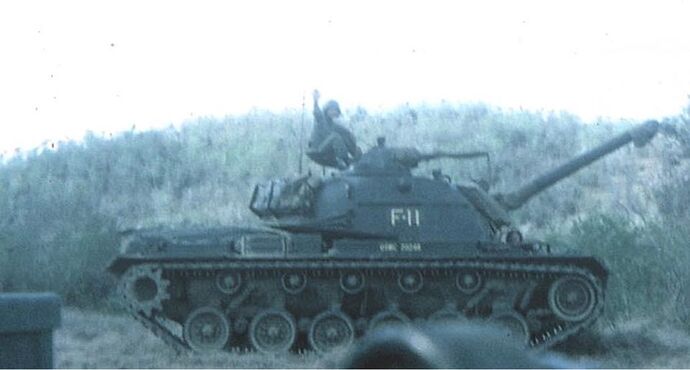 I agree it appears to be yellow. I think the engine decal was just that unit then. I recall on one other Marine tank company doing something similar in WW2 but that’s it.

Star has this sheet with Fox Co but in white. 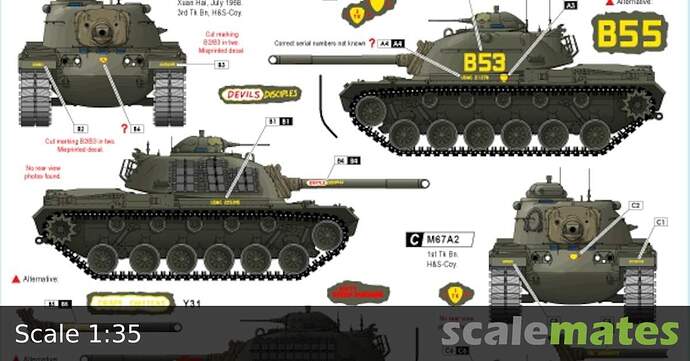 You could make your own mask.

Maybe it’s just me, but the gun looks a bit weird…Could this in fact be a M67 flame thrower tank ?

Notice the location of the bore evacuater?

Maybe it’s time to change my glasses…I can’t seem to see it .

What bore evacuator? I see the muzzle covered with canvas. (What is it with them sticking canvas bags over everything at Gitmo? Muzzles? Detainees? (Too soon?)

It is. Someone from 2 Tank sent 3 photos. Way it was "captioned " in the post it looked like F-11 was a gun tank. The next photos was a zippo, I thought. One I thought was the Zippo was off in the distance. Zoomed in and looked closer. That one is an M103.

I’m pretty sure it is an M67. Short guntube, no bore evacuator.

So…I’ll keep my glasses for the time being

It is an enlargement area of the barrel to deal with the gases when firing. Top photo right hand side for a M48A5. 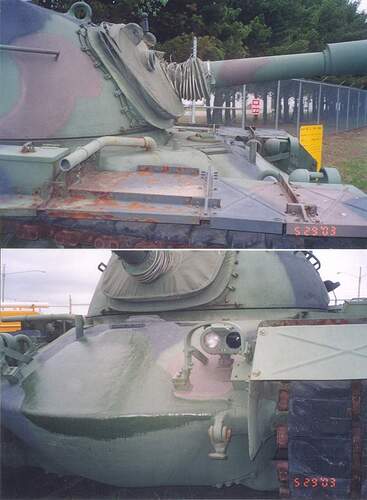 The canvas bag keeps trash and rain out of the barrel. A clean barrel is a happy barrel

I think it’s an M67 too, look at the gunner sight area, has the same sight as the TC, I believe that’s an indication of a flame tank, but I could be seeing things too

There were two M67 Flame Tanks deployed along side the Platoon of five M103A2s from the 2nd Tank Battalion at Guantanamo Bay.

What time frame? Did they have any M48 gun tanks there? (post 67) Here’s the photo that started this mess 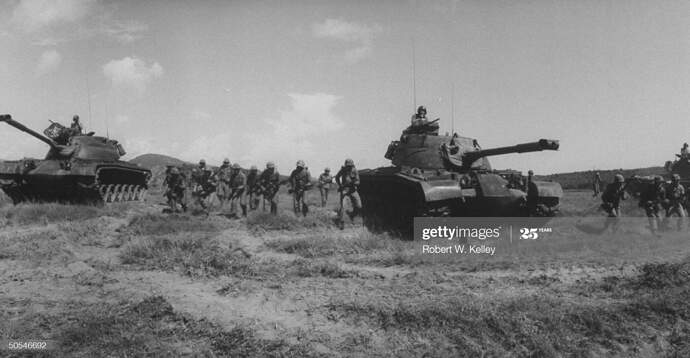 I zoomed in on these two. I dont see any tank numbers on either. Left one looks like it just has the USMC and s/n on the hull. Ditto for the right. One on he right is a dozer tank??? Looks like the G503 riser is there on the right one.

Late 60s to early 70s the two M67s were deployed with the Platoon of five M103A2s and the reinforced Battalion. From what I have dug up there weren’t any M48 gun tanks at Guantanamo Bay in the late 60s. The pic you posted was taken in January 1962 in Guantanamo…M48A2s I would expect.

Well …So much for THAT idea.

And I just ordered up some USMC Green. ('course with Hobbylinc’s crappy shipping aint gonna see that soon.) Have to come up with another scheme. MERDC Grey Desert from 29 Palms (There is a PeeWee Herman joke there somewhere.) maybe?

MERDC Grey Desert from 29 Palms (There is a PeeWee Herman joke there somewhere.) maybe?

Funny you should mention that, the dinosaur scene in Big Adventure was filmed at the Cabazon a little museum about 1/2 way between Camp Pen and Stumps. That is where we would stop for a convey check point, use the head and get pogey bait. Also one of few by MC order (as I recall) civilian places you where allowed to wear your cammies (bdu for the doggies).

Passed through that area a number of times. My brother was a cop in Blythe for about 7 years. The whole area was known as Patton’s Playground in WW2. 'Course the first batch of troops trained there were sent to the Aleutians! We’d go out in he desert, jus out side town and the desert is carpeted wih .30 cal ammo. My bro handled about 5 calls during his time there for idiots that found live grenades out there. (Uuuuh … What’s this ring do?) https://www.deserttrainingcenter.com/

It’s a M67 you can tell by the gunners sight and barrel. That would track with the F-11 code on the turret. 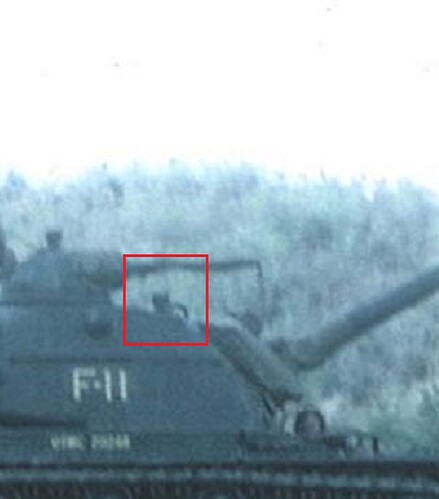