Hobby Fan released a new resin figure kit in 1/35 scale, featuring US Special Ops soldier firing a Javelin. There are also some extras in the kit, check it out! 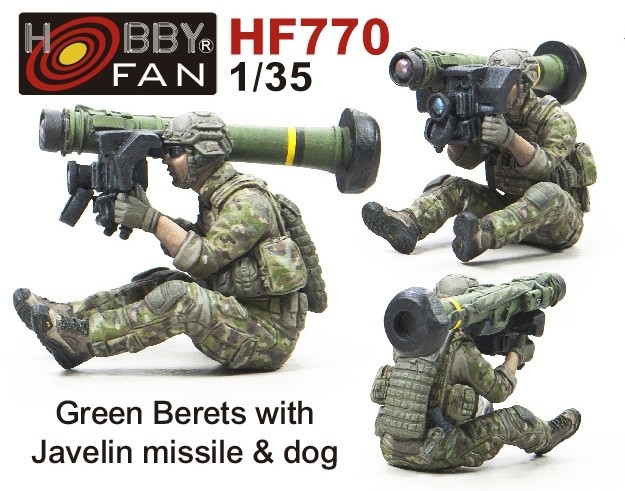 Is it just me or is that launch tube floating/unsupported over his shoulder?

That is certainly an… Interesting looking Mk 18.

Is it just me or is that launch tube floating/unsupported over his shoulder?

I saw that too. I wonder if it’s the classic “hands to weapon alignment” problem or if the Javelin gets tilted up to fire.

As it appears, the gunner seems to be engaging in a direct line-of-sight fire of the Javelin which is indeed possible, just like a rocket launcher, but the 49-pound Javelin HAS to rest on the shoulder. Now if the Javelin rests on the shoulder, it might tilt upwards for a top-down ATGM attack, BUT if it has the classic “hands to weapon alignment” problem, then the hands won’t grip the triggers properly! Many early 1/35 figures back in the 1990s had this problem. So it appears that in order to grip the triggers properly, the Javelin tube floats over the shoulder and at 49-pounds, that can’t be happening!

The error could probably be fixed by sawing off and sanding the wrists to achieve the proper angle of the Javelin tilt, but at 1/35 scale, it would be a huge pain and that might make the wrists weak even with superglue and putty. Or one can fix it at the ATGM tube mount to tilt it back some more. Still, I don’t see a simple fix for this error without seeing the parts photo.

Yes, the Mark 18 looks…“melted” for resin. I’m surprised because this is HobbyFan and their previous kits had really crisp quality and superb fit.

i wonder if this could be altered to make him look Ukrainian?

With so many 3D printed Javelins floating around, one should have noticed that the missile is slightly canted rearwards, so that it rest on the shoulder. Interestingly, AFV Club did it right with their injection molded Javelin.

Unfortunately, I don’t think it might be as simple as replacing the Javelin with another brand. Even replacing the hands might not work as not many aftermarket hands have fingers and thumbs in those positions.

If lucky, a modeler might be able to find a Javelin that is tilted more upwards from the CLU.

It’s either the wrists or the fingers’ position that is causing the Javelin to not tilt upwards and rest on the shoulder. It’s a simple mistake that should have been corrected before release because most Javelins are aimed skyward.

Or it is as simple as whoever built the figure didn’t know it should sit on the shoulder and tilt up, so they built it level. I’m sure the Javelin and CLU come in many pieces and can be built at any angle, even the correct one.

I don’t know about this one. Hobby Fan kinda messed this one up. This Javelin figure set may not be worth the price and hassle to adjust it to look accurate…