Scouting for a future project. What colors were used on the Spanish HA-1112 Buchon? And what times? I’ve seen reference to a brown/ green over light blue but that was the result of an aviation illustrator and too much cheap sangria. Seems Natural Metal over azure blue or all blue were the norms. I read somewhere light grey over blue was used towards the end of their careers. Any thought of FS/ RLM/BSC equivalents 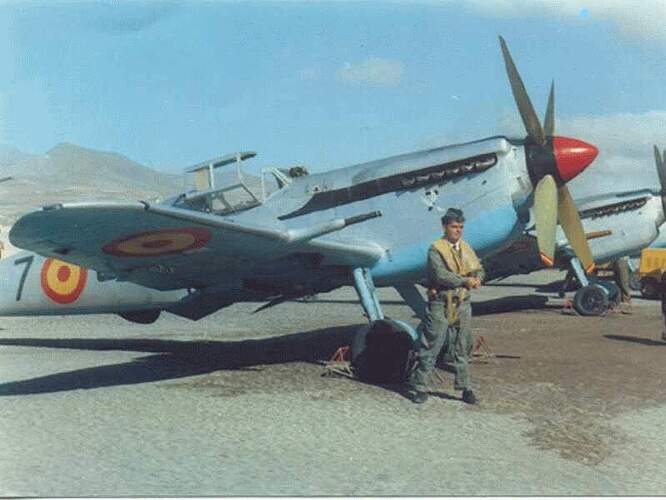 Not an expert at all on this field, but I have found this reference:

It is edited by Fundacion Infante de Orleans, a reliable source as they preserve/restore old aircraft in Spain.

According to that, no precise information is available but seems they were painted in a bright blue like Peugeot cars of the time -there is a 1/30 model of one, made on their workshops at the time the aircraft were built so we can assume the color is correct.

Later on they were painted in steel with sky blue on the underside, as the second photo.

Saw something (instructions from a kit?) that referenced an RAL or RLM blue for the late 50s scheme … of course can’t find it.