I would like to get any and all opinions from you guys on the Armortech 1/6th models vs the 1/6th and 1/16th Heng Long models.
Are these large scale models worth the hipe and money?
Also, after looking at the Heng long website, I was just curious how detailed (authentic) are these kits as well as how much detail can you put on these to make them look more authentic?
Thank you

All the armor in this picture are Heng Long: 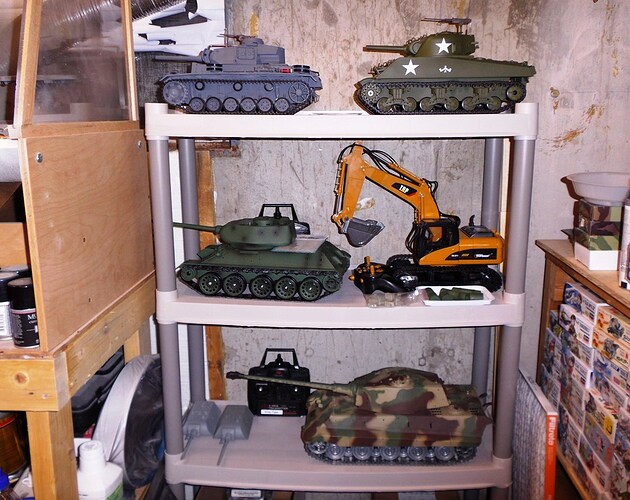 The Pz. III and Sherman have or will have after-market decals. Both have AM MGs on the turrets and they are NICE!! The Pz has metal tracks, road wheels, and gears. Debating adding metal to the Sherman (it does have metal gears though).

The T-34/85 is stock right now and I’ve not done anything to it. Eventually I’ll upgrade the tracks (and maybe the road wheels), get AM decals, and throw on some Value Gear 1/16 stowage.

The King Tiger has all metal upgrades inside and out. I also have an AM tow cable set. As of yet, I haven’t done anything else with it.

I haven’t done much with them in a few years (this pic was taken way before I remodeled my modeling room)…partly due to renovations and working on my regular models.

I can’t compare them to the Armortech as I’ve never had one nor had the desire to drop that kind of money. For the price, HLs are great and there’s plenty out there to upgrade their mechanics and looks with. 1/16th is plenty big enough for me.

Feel free to drop me a line if you have any questions about HLs.

Are these large scale models worth the hipe and money?
Also, after looking at the Heng long website, I was just curious how detailed (authentic) are these kits as well as how much detail can you put on these to make them look more authentic?

A correction to start - it’s Armortek.
HL & Armortek are not really comparable, HL are large plastic Radio Control RTR pre assembled models - mostly 1/16th - the early ones are not too accurate, M41 & Tiger 1 for instance are often considered toy like - that being HL’s initial niche, however HL have been upping their game, accuracy & electronics have been improving and they challenge Tamiya in 1/16th - definitely in numbers & range, Tamiya still has the quality edge, although the Sheridan track failures suggest that may be fleeting.
Armortek are engineering project kit sets which are Radio Controlled, mostly aluminium with scale armour thickness.
Accuracy in both has been compromised to a degree to facilitate the RC ability. However in both you can super detail just as much as 1/35th, though the detail is usually more about functionality that cosmetics. A problem is that there a relatively fewer AM suppliers in 1/16th & 1/6th and due to the size & small production runs, the costs are considerably higher. With HL being pre assembled, you need to disassemble first, but there are plentiful spare parts available for HL.

Worth the Hype & money - that’s up to the individual to decide. 1/6 is a significant investment (UK Pounds 3-4K), but if you follow the builds on the Armortek forum, some provide years of entertainment to their builders. One such - My Beaut Aussie Cent - Armortek - 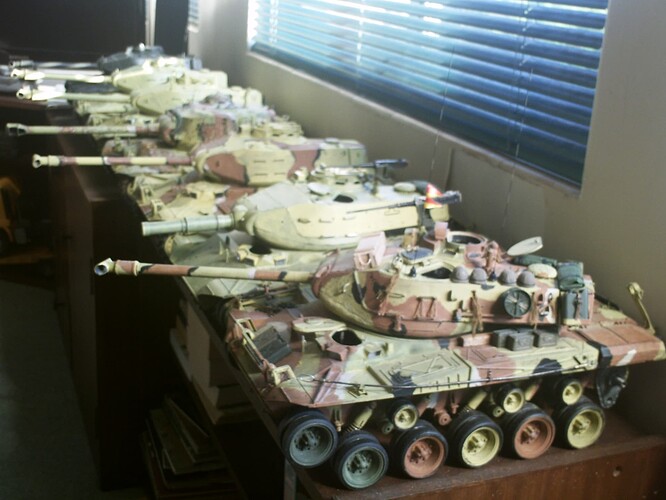 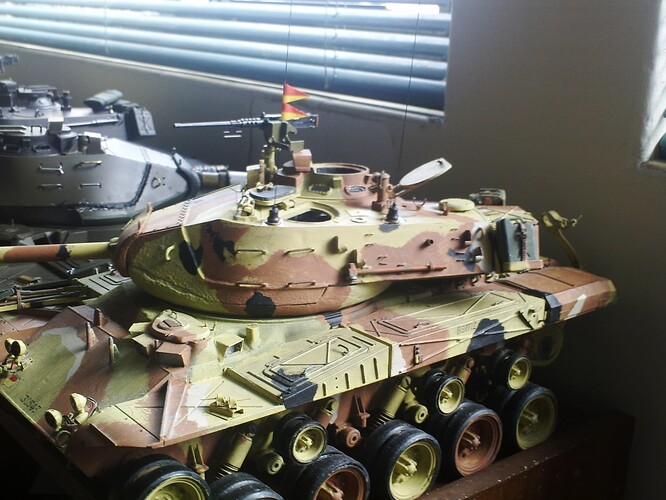 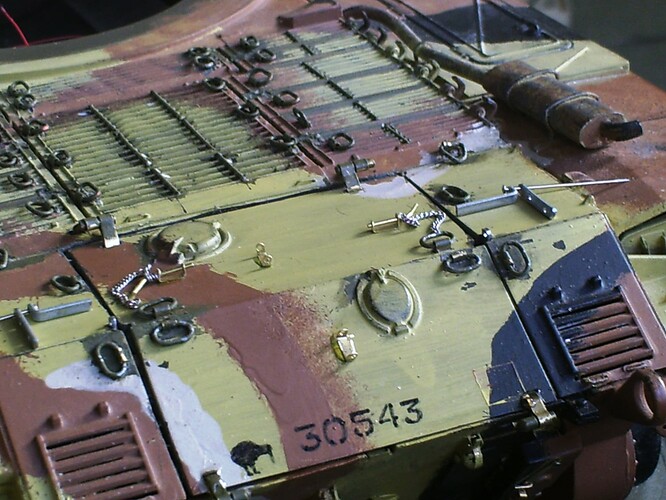 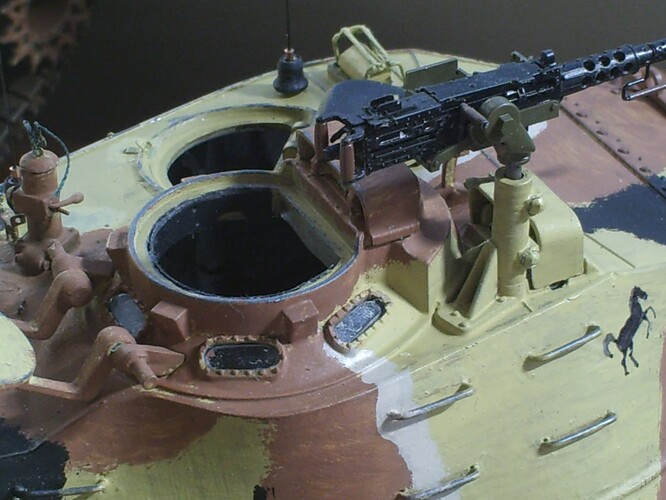 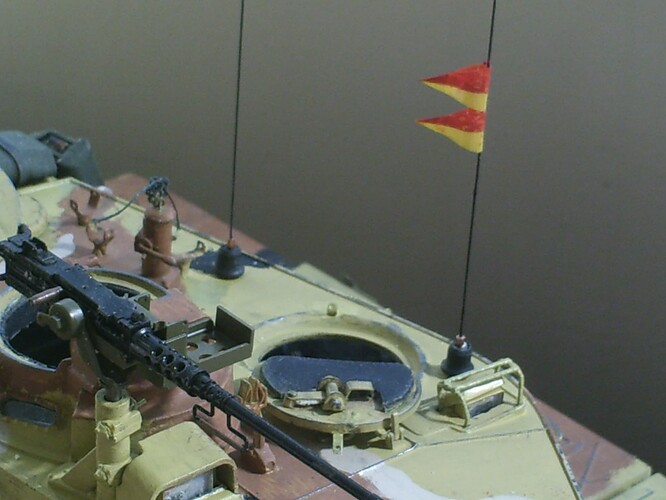 With regard to Amortek, I only have 3 Centurion track links, which are for a research project, in comparison to 1/16th Ferdinand tracks for my Ludwig Centurion - 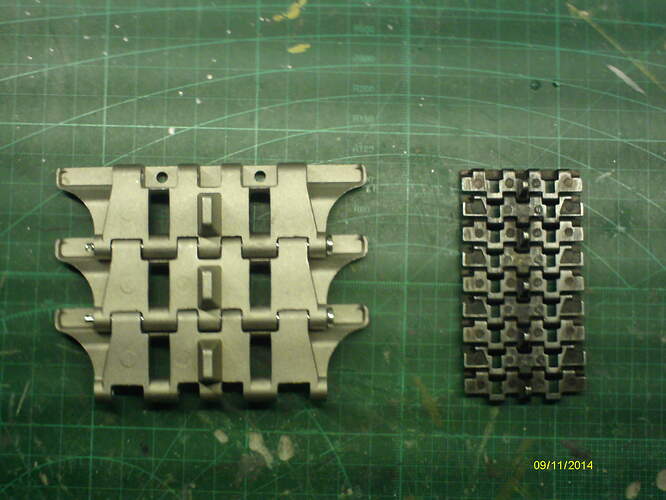 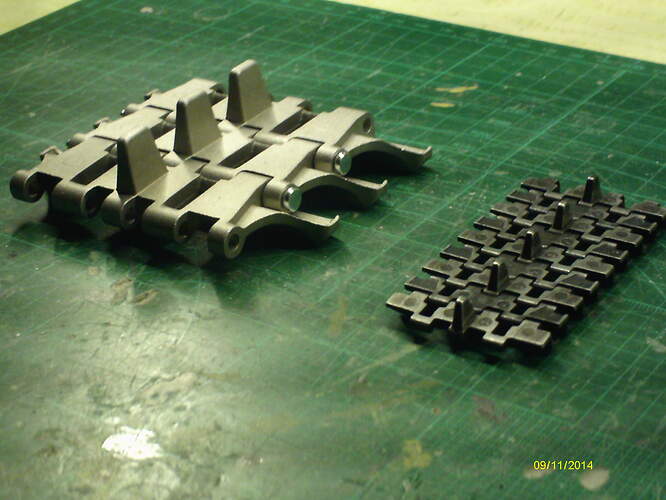 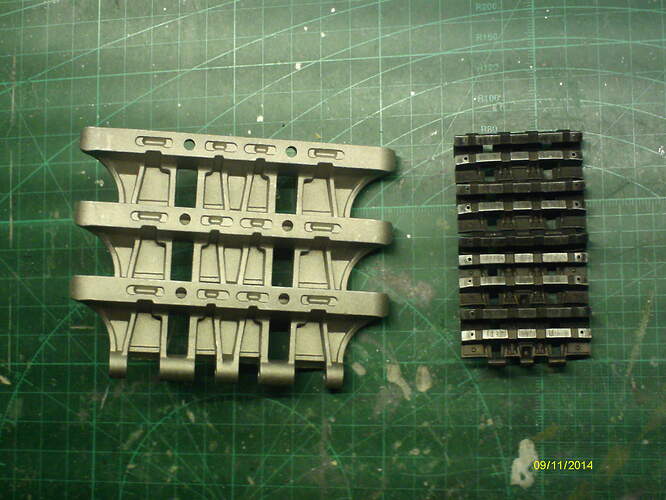 Mal,
So the HL models seems to be a good substitute for the Tamiya, correct? Also, how hard is the HL models to disassemble for some extra detailing?
Thank you

I have not done the 1/6 scale stuff, too expensive. I love the Heng Long stuff. The basic models are kinda toy-like but can be upgraded and detailed out. If you look around, there are lots of aftermarket stuff you can get; but it can be pricy, and parts are produced on a very limited basis. If you see an upgrade you want, buy it - now, because it may not be there three months from now when you need it.
I have a HL M1 Abrams that I detailed out and backdated to an M1A1, it looks and operates great!
Ken

Hi Chris
For the most part, not too difficult to disassemble, some are a little tricky to find the screws, I seem to recall Tiger 1 has screws hidden in the sponsons over the tracks, meaning you have to crack track & remove them first.
Also some HL models, being RTR, suffer from over enthusiastic glue application.

Yes, HL are a good substitute for Tamiya, primarily the price point. They are the reason I got into 1/16th, while I’d seen the Tamiya 1/16th since the 1970’s, didn’t have the cash to splash back then & when I did, the price had moved on. HL was much cheaper plus had the model - M41 - I wanted & Tamiya didn’t, so no contest.

Mal,
thank you very much for all the information! A big help.