AC Models created a set of 1:32 scale figures a couple of years ago. This seller on ebay seems to have one set left… 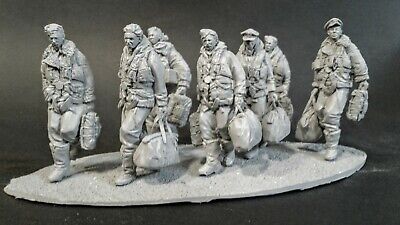 Looks like it’s brand new and might not actually be on the market yet, but if you’re looking for crew in the aircraft, this should fit the bill.

I’m not 100% sure about the crew manning their stations. None of them appear to be wearing Irvin jackets or flying boots. At the altitude Lancaster missions were normally flown at it was cold, even in the summer. The walking figures look much more prototypical to me. I had a mate I worked with many years ago who was a flight engineer on Halifaxes and his squadron helped fly in the airborne forces for “Market Garden”, which was comparatively low level. I saw a picture of him and his crew and they were all still wearing the full Irvin electrically heated suit. Apart from anything else, it helped protect from serious burns if your aircraft was riddled by night fighters. They may be OK for tactical bombing missions over France after D Day, but for normal long range missions not so.