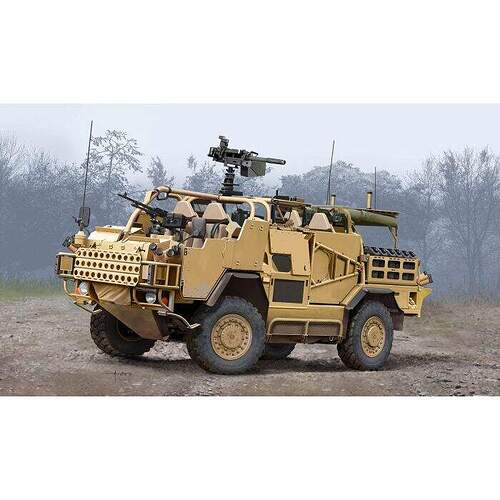 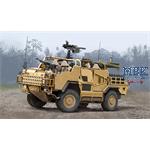 
Shop around, HLJ seems to have made a mistake or are paying a lot extra to get kits early.
They also had it at USD 150:38 and have marked it down (unless that is just a trick to attract unsuspecting customers) 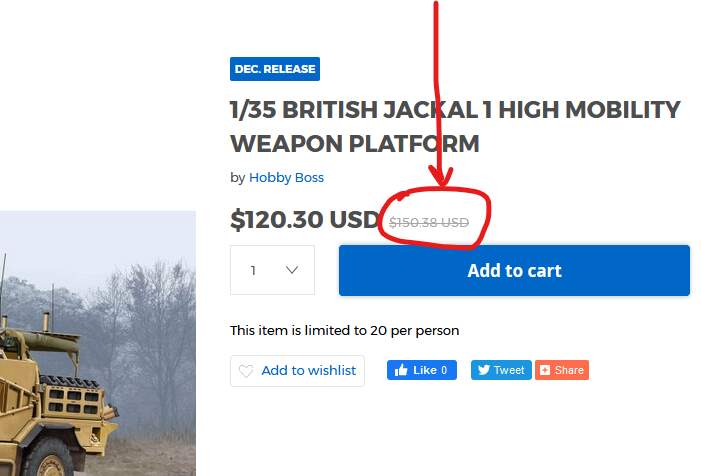 $70.55 is more like it. That sounds high but fairly reasonable these days. HLJ always lists some ridiculous MSRP next to their price to make you think you’re getting a deal. Breaking the $100 ceiling for a styrene box kit has always been the big no-no for decades and I was just stunned to think that Hobby Boss, of all companies, would be the ones to break it. Shame on HLJ for that price! 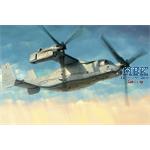 Thanks. I didn’t spend much checking other places as it seems early to do so. I will let others know.

It appears that any model coming trough/out of Japan is ridiculously high priced as of late. Even eBay sellers in Japan have their models at about twice (or more) the going price. I don’t know if is a weak Yen, tariffs, etc., but something is driving it.

The USD has been dropping lately, just saying …
Your “issues” with the 100 coins mark is the same as I have have with the 1000 coin mark in my currency.
Seeing prices in Euro or USD is a lot better than seeing them in my currency but I did spend more than 1,000,000 on resin kits from Italy once (before they switched to Euro)

I don’t have much of an issue with $100 price point, that was Matt’s comment. I have issues with a wing rotation upgrade taking a V-22 kit to that price point. Not many winged 1/48 go over that barrier. The Italeri later kit seems the best option still. Up to each modeler to decide for themselves.

A million seems like a lot but a million lira not so much.

I read in another thread in the old forum that this is actually a Jackal 2? Not a Jackal 1? Can anyone help me out?

If I’m not mistaken, Hobby Boss has crossed the $100-mark several times already. Quite a few of their railroad and 1/350 ships crossed that line, as did their 1/32 B-24 Liberators.

QUOTE: I read in another thread in the old forum that this is actually a Jackal 2? Not a Jackal 1? Can anyone help me out?

The artwork definitely shows a Jackal 2 - no idea yet what is actually in the box.

has this kit been released yet or is just on the radar?

HLJ says a Dec release but has no shipping information (size/weight) so a very close release???

The marking/painting diagrams shows this: 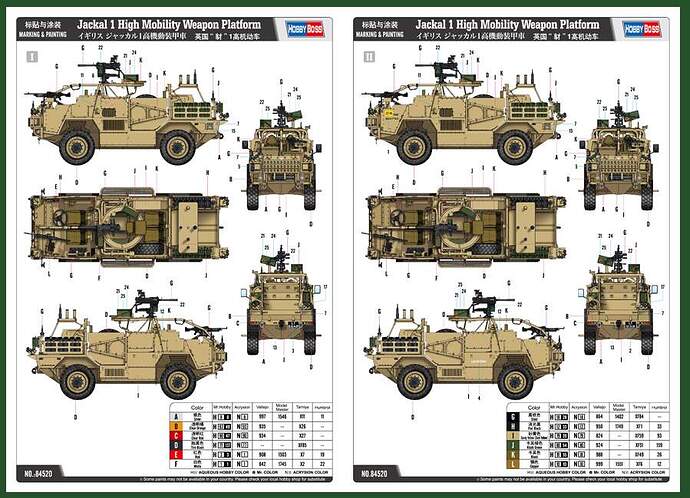 I know, but if you look some of the bigger kits that I would put under armor even though technically they aren’t do sell in the $100+ range, such as the tractor-trailer sets for hauling AFV. Obviously only those with money to burn will spend full MSRP as the rest of us know where to look for deals. However, if this is Hobby Boss raising the price on a kit above its value comparable to other HB kits like it, then it might not be a good sign. As I have bought HB kits in the $100+ block before the price itself doesn’t alarm me, just what it might indicate for pricing future releases.

Do the contents justify the price?

This is really nothing new. In general, anything not made in Japan has always been more then buying it elsewhere, due no doubt to Japanese import taxes. It seems worse for Chinese manufactured kits as opposed to some from European countries. You will always get Chinese made kits from places like Lucky Model, Hobbyeasy, and Chinese Ebay sellers far cheaper then from HLJ or Hobbysearch.