Primer on the structure and seat. Foil looks ok-maybe should have flattened it out a bit? Better than a solid blob that the kit gives. 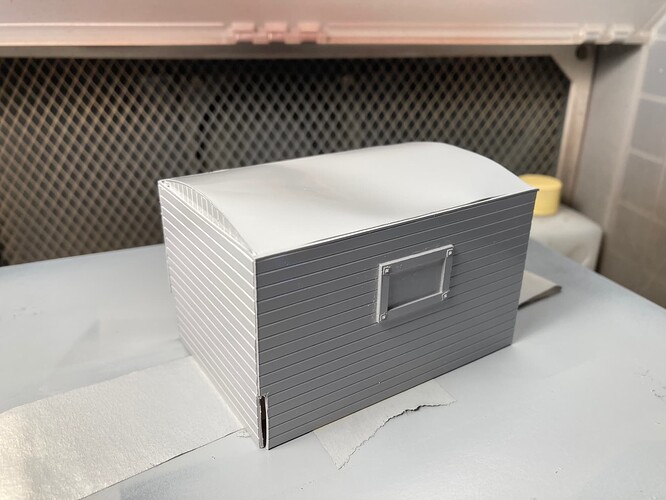 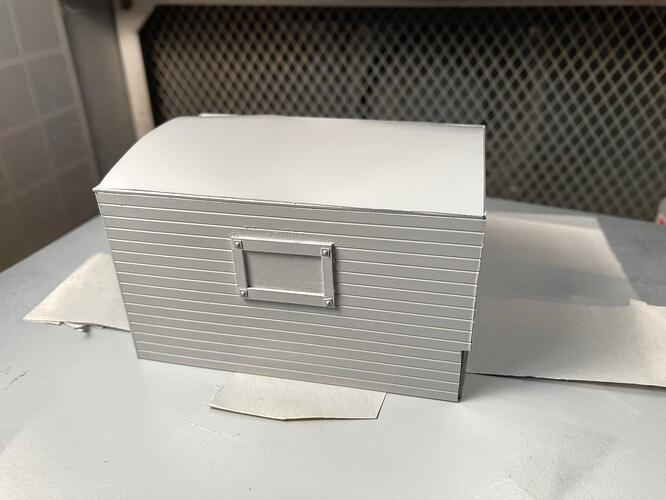 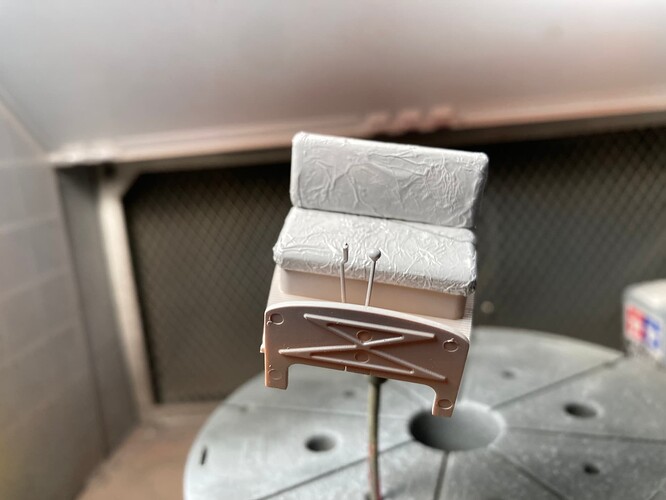 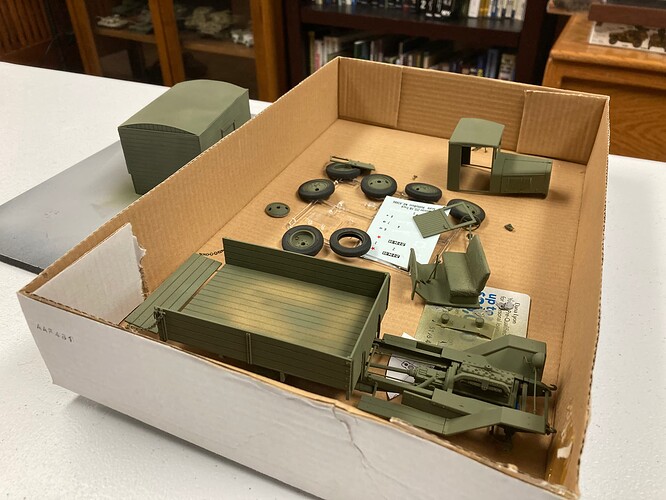 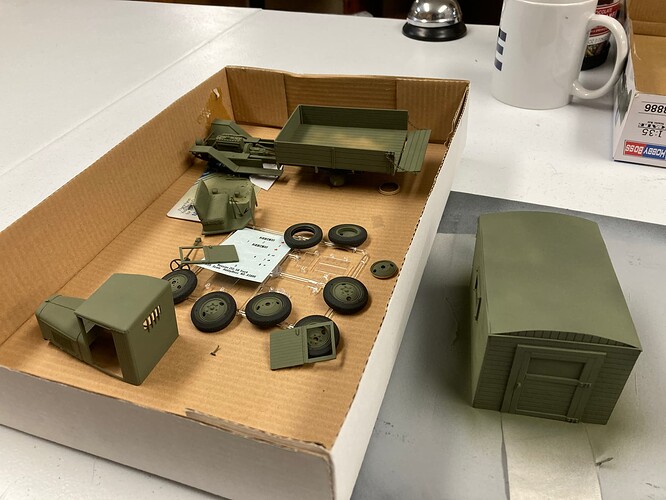 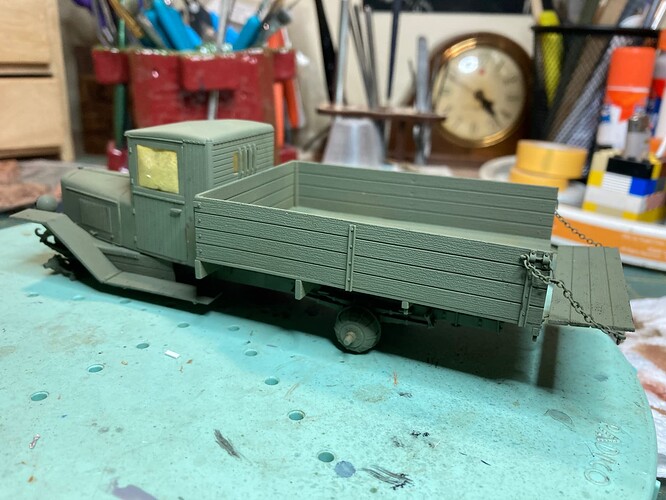 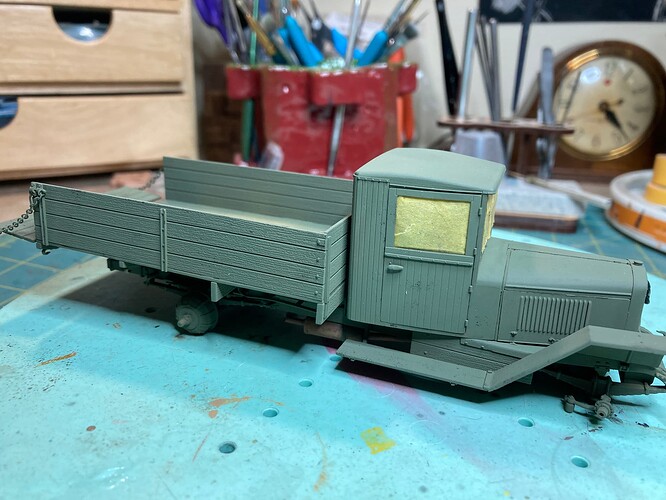 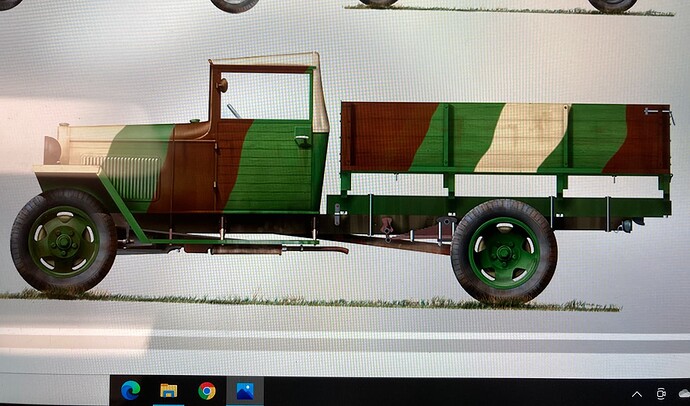 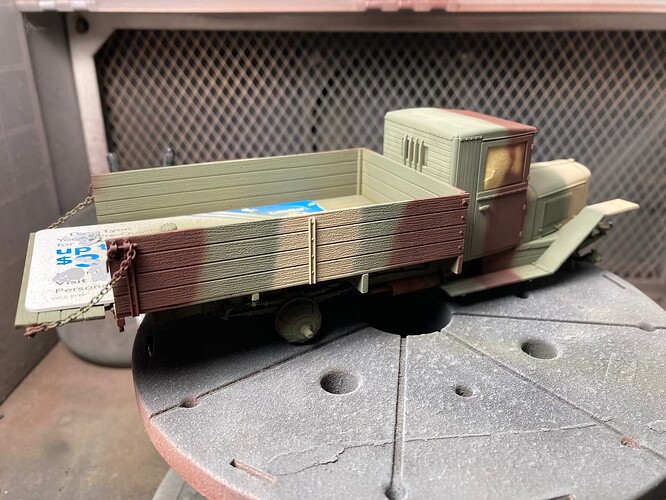 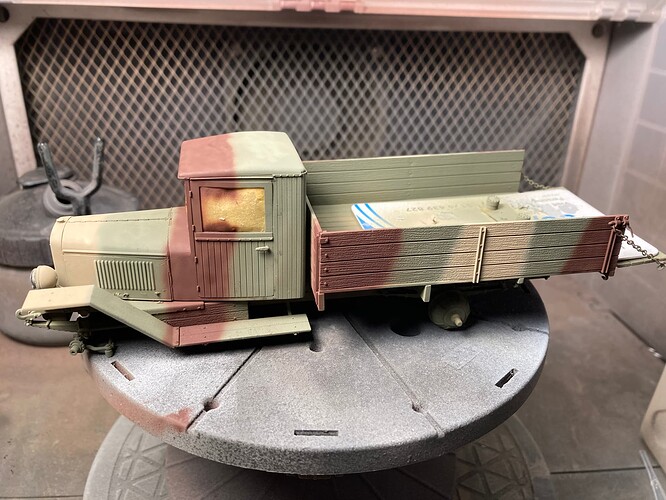 Satin coat on the field kitchen 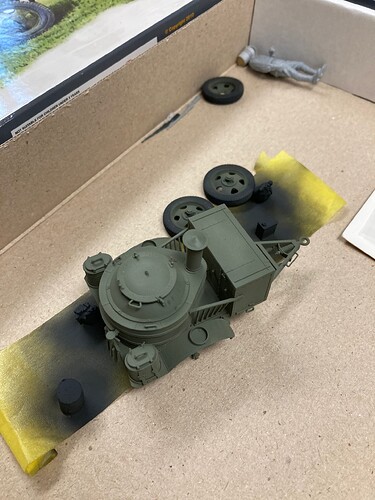 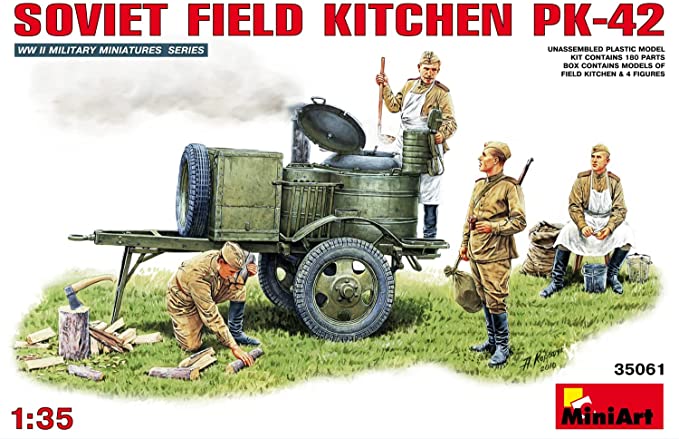 Great build Dan, and such a rare treat seeing both kits too. Just wondering where the Zis camo reference comes from? I’m not saying it’s wrong, but given the artist seems to have found a variant with horizontal door panels (?) it made me wonder how accurate it is for your purposes. On the other hand he has shown the canvas roof & rear cab wall correctly – whether some/any variants had completely “hard” cabs I don’t know, so yours isn’t necessarily incorrect. The HobbyBoss box art hedges its bets, hard to tell if metal or canvas – does the painting guide clarify?

All I do remember is that when I made the Eastern Express Zis 42 many years ago I had to make a number of changes to represent the earliest variant (c. 1943) based on some (hopefully correct) research– I assume the Hobby Boss kit is an EE re-box so the cab’s probably identical bar my amendments e.g. much thinner vertical door slats, battery over mudguard etc… 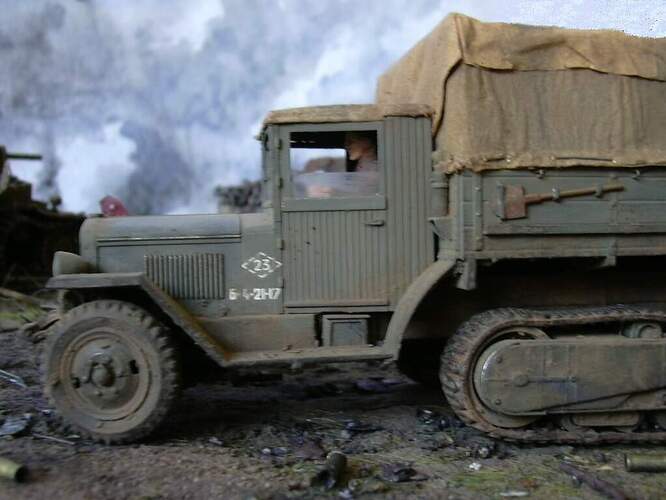 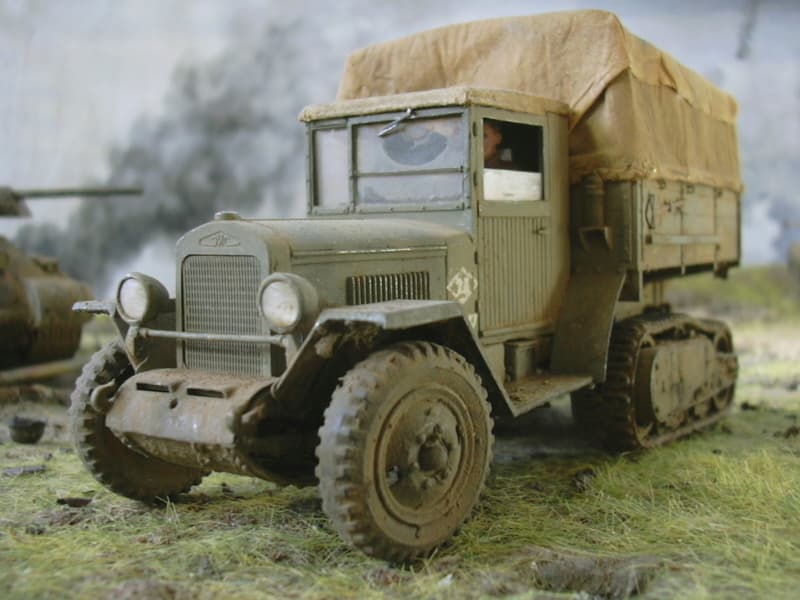 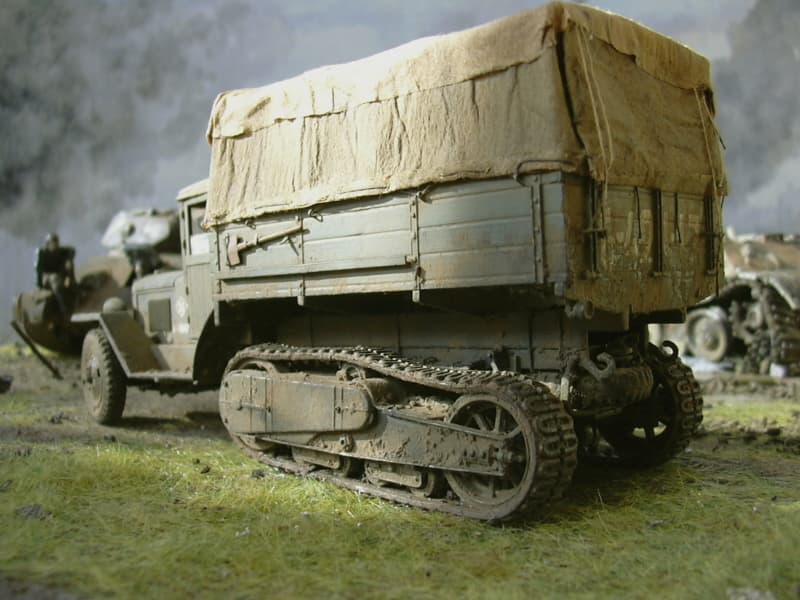 Oh, I’m sure its 100% made up but I wanted something besides 4BO green.

The profile is of a Gaz not Zis. There is no panel after the door and the Gaz has horizontal slats.
https://www.o5m6.de/redarmy/gaz_mm.php

I wouldn’t be surprised if they wore a similar camo scheme.
https://truck-encyclopedia.com/ww2/ussr/zis-5-truck.php

Zvezda has a 3 tone scheme just in a different pattern.

So according to the 2nd link up until the end of ’41 the Zis had a metal roof & only after that they saved steel by making cabs out of wood & presumably the roof out of canvas or wood too - photos of the early version of the Zis 42 halftrack show canvas anyway.

Whatever, sorry for my mistake Dan & certainly no rules apply on camo patterns

Wooden roof is difficult to get watertight due to all the joints between individual slats.
Covering with tar will improve things but it will start to leak. Wooden ship hulls are made watertight by hammering a mix of tar and linen or hemp fibres (I think the term is ‘caulking’) into the cracks → labour intensive but the sealant stays in place when the ship moves through the water.

A wooden roof is easier to seal by covering it with some soft sheet material, maybe fibrous that will suck up some kind of sealant → canvas soaked with tar and or paint.

I would guess that once they went for wooden cab sides they would eliminate the sheet metal for the roof as well. That relatively small piece of canvas could possibly be leftovers from the canvas/tarps used to cover the load beds.
Small ships can be covered with painted canvas to make them watertight: 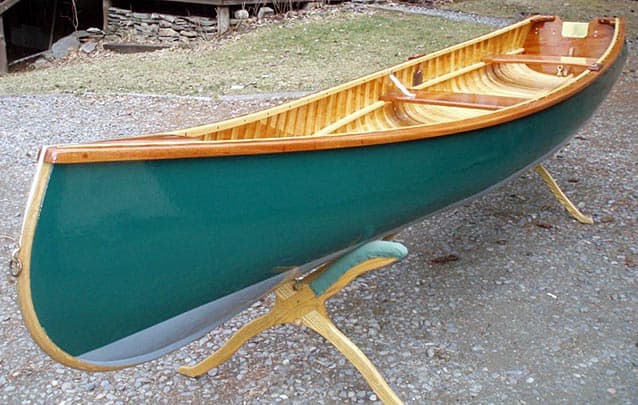 Only fair, I noticed the cab issue first and missed the horizontal slats. My appointment was made for next week. No seriously it was been long over due.

I wonder if they cared if it leaked with volume being the key to move equipment. Wonder what the projected life span of the vehicle was and if that had an impact on the manufacturing process.

They cared enough about dirt splattering around to still provide simplified fenders.
Driver comfort, i.e. avoid them freezing to death, was important enough to provide a cab
instead of a simple canvas solution as on US trucks.
I would think that water dripping into the cab is problem worth taking seriously.
If there is even the barest level of heating in the cab the snow on the roof will melt so
dripping water would be an issue in all seasons

They also removed the bumper. They also used to send troops to front not fully equipped, you pick up gear along the way or so the Internet said. Never got the sense crew safety/comfort was high on the list of requirements for Russian vehicles.
If the vehicle life was measured in months, then such worries wouldn’t matter.

Saw this on track links-
|From: stephen brezinski||
|I read a review and construction article a year ago and the writer states the roof of the Zis-5V Ural was a stretched fabric coated with an asphaltic coating, similar to the coating put under the chassis.

Also found this, which suggests the roof was one sheet of wood.
http://svsm.org/gallery/zis-5v/IMGP0102

http://svsm.org/gallery/zis-5v
Other parts of the cab and door suggest solid interior piece and slat exterior pieces.

Regardless Dan is building a very nice vehicle.

Thank for the links to the images. Confirms how I imagined it would have been done

Got the wheels on and the box. 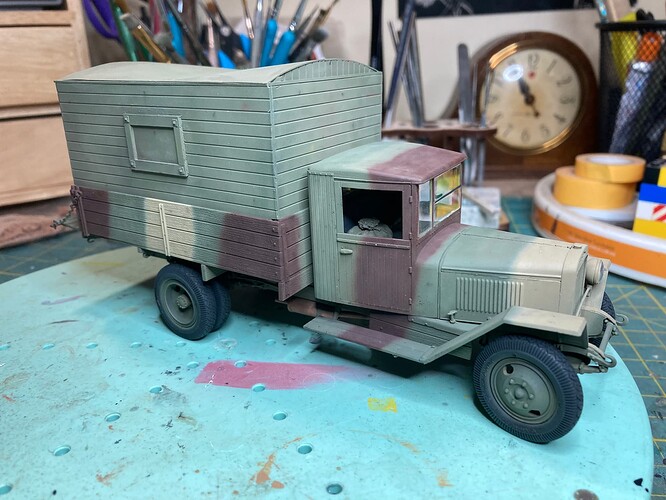 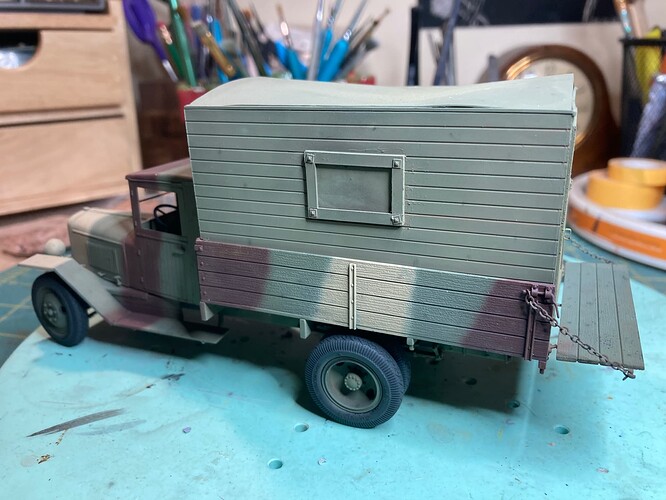 Put a filter on 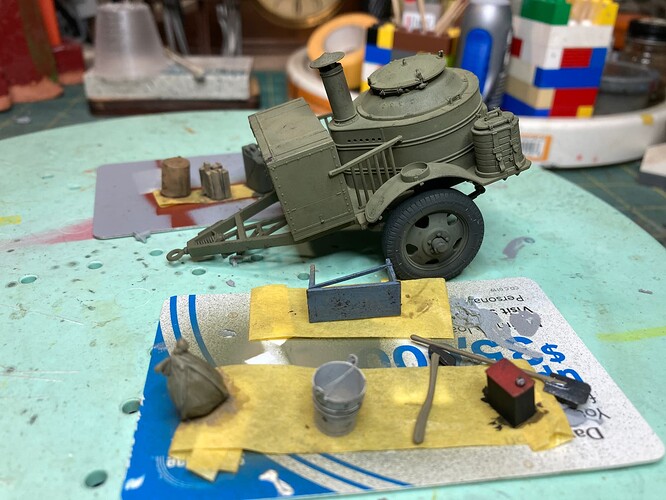 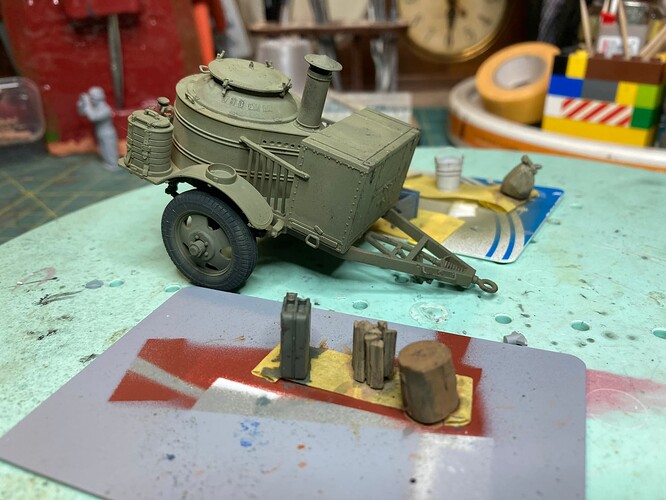 Got back on this. 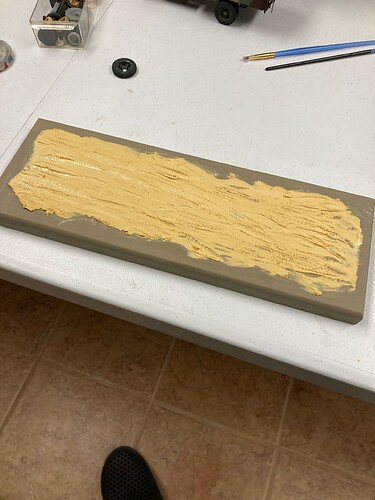 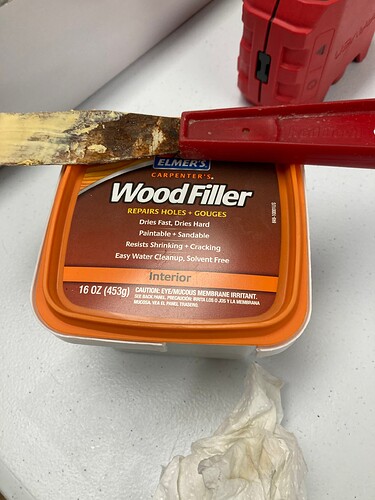