So I picked this up as intended to be a bit of a ‘palette cleanser’ after a Miniart interior build. 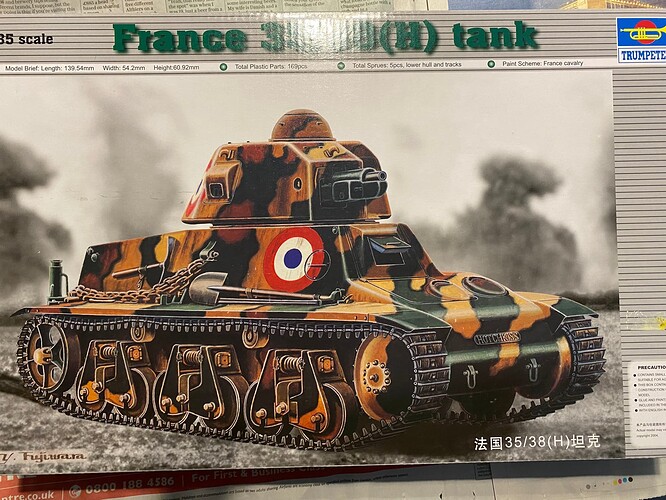 Fit is a little crude and there’s more injection pin marks than parts! Given it’s an early (2004?) Trumpeter kit it’s to be expected I suppose.

It therefore lacks much detail including cast texture and weld beads. Whilst this was meant to be a quick build, I’m finding myself wanting to add detail where needed. Photos I’ve looked at online shown surprisingly smooth texture. Not sure if it’s the resolution of old photos or not, but given the age of the tank I was expecting more rough casting texture.

Has anyone seen one of these up close who can comment on the cast quality?

I wouldn’t call it ‘smooth as a babys bottom’ but in 1/35 it would be very close.
Do a “bad” airbrushing job with the primer and call it done. Edit: See Barnslayers post below.

I can only relate to the Somua in Bovington; it is remarkably smooth, including the turret; obviously not that much wrong with French foundry/casting techniques back in the Thirties!

I’ve seen rougher texture on Centurions. I would hesitate in adding any such texture unless you can identify its presence for sure. Perhaps a look into the Chars Français site would help, or, presumably there’s one or two at Saumur and someone has, in all likelihood, done a “Walkaround” of it/them?

Looks like spraying primer from a bit of distance should do the trick.

Thanks all. I picked up some Vallejo primer a while back I’ve never used, so probably won’t have to try to achieve a poor finish

I wonder what else the French were producing inter war that had refined their casting in their foundaries.

I wonder what else the French were producing inter war that had refined their casting in their foundaries.

I’ve seen the H39 in National Museum of Military History/Sofia, but I can’t remember much about its texture…

What I can propose is that you take a look at the high resolution pictures from said tank, taken by Mr. Massimo Foti and included in his NMMH album on Flickr: 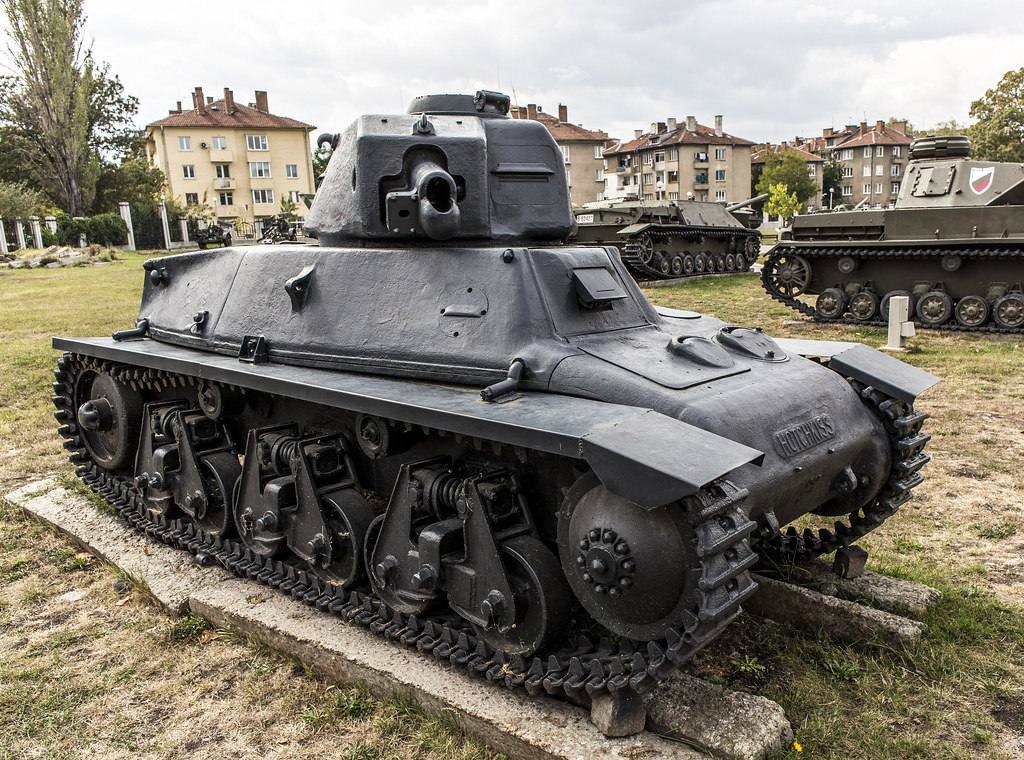 Each picture can be downloaded in its original size(approx. 14-15 MB) and very fine detail is revealed by zooming in, including what I would call a very subtile cast texture.

I enjoyed this kit, If you have some patience, you can have an acceptable model, look the result that I had: 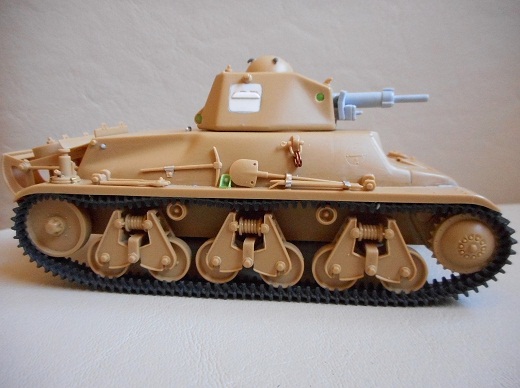 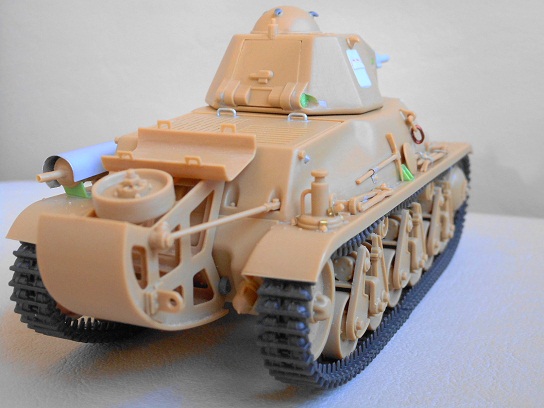 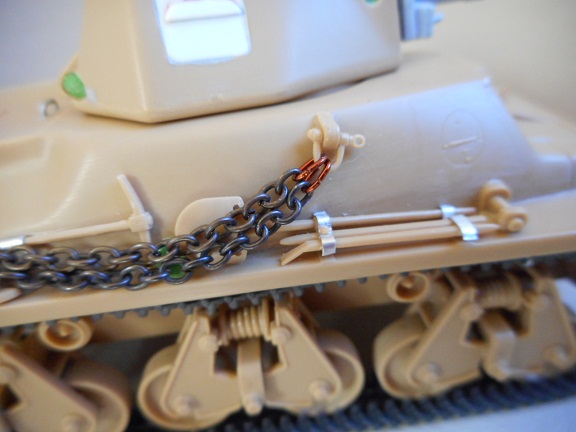 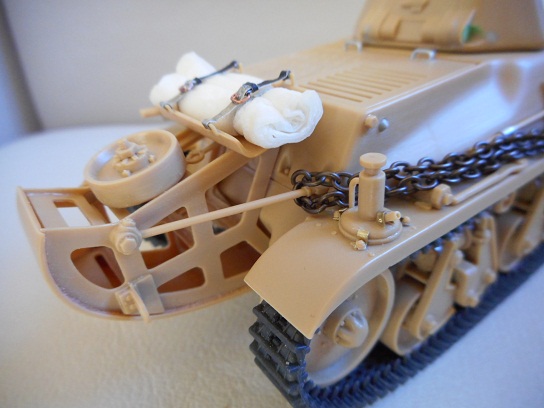 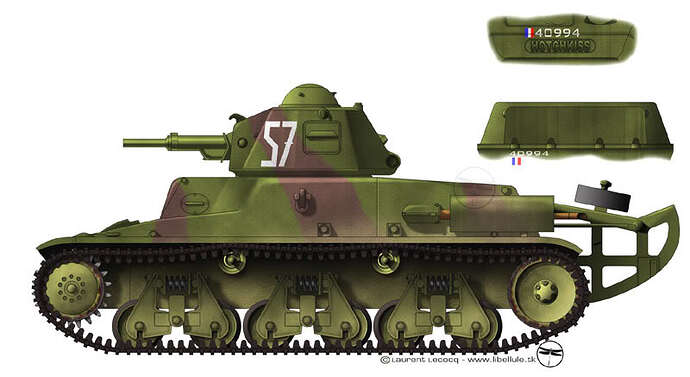 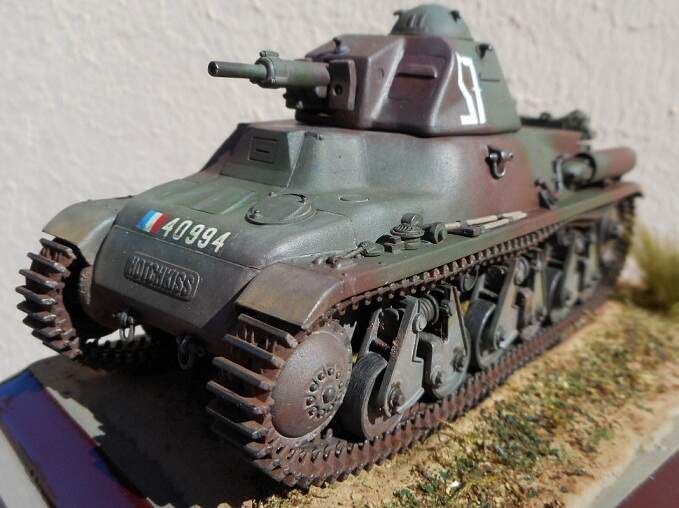 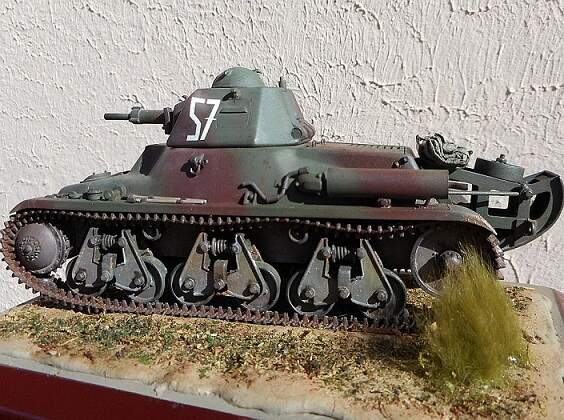 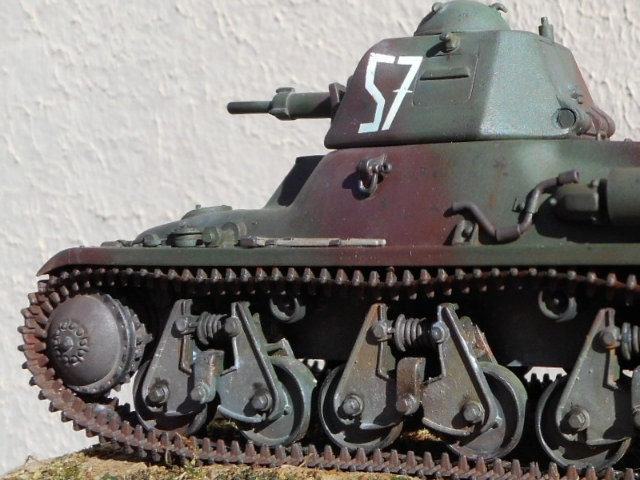 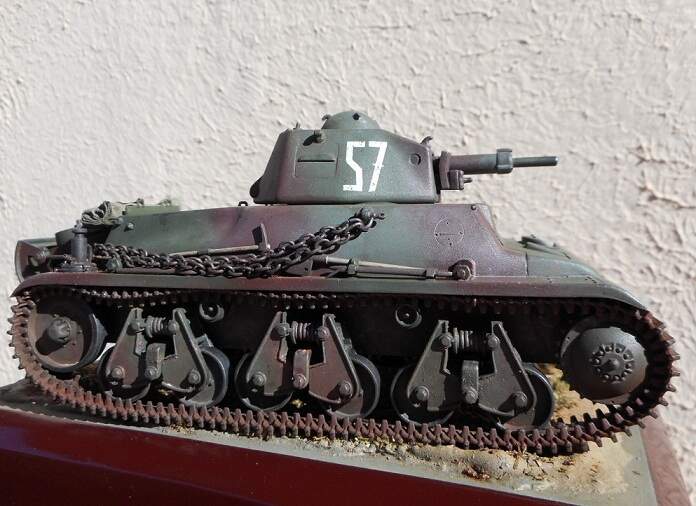 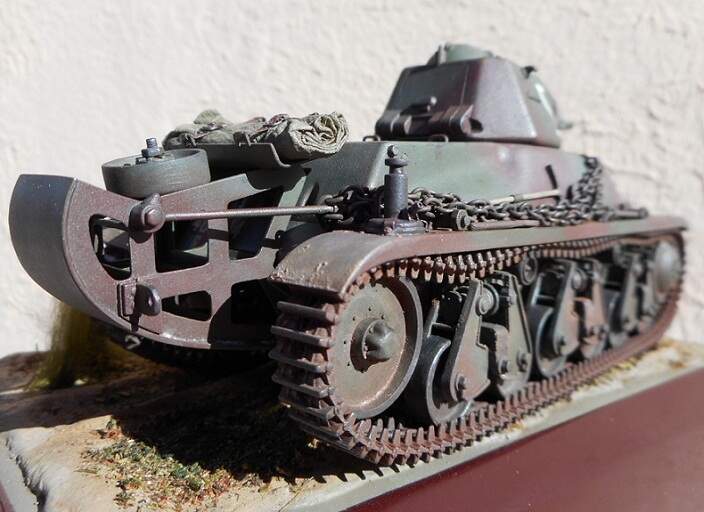 I hope this reference It will be util 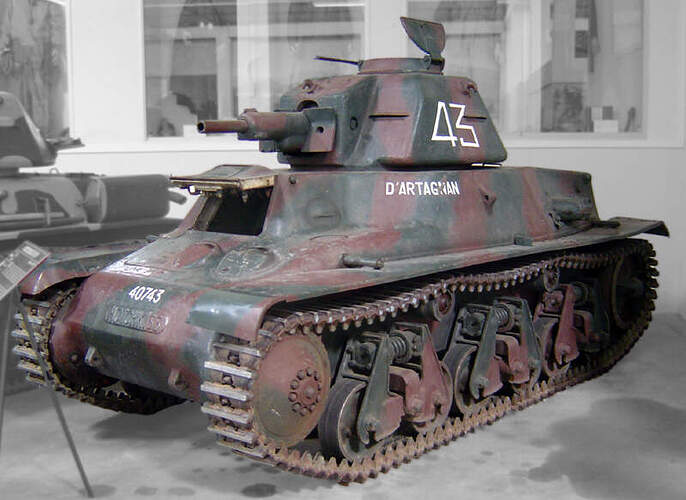 You’ve built a very nice model.
I have a 39 (H) of Trumpeter, in the version with side rocket launchers utilized by the German army. I am encouraged by your build.

Finished the initial build and had a first go with the Vallejo primer and erm, it annoyingly went down well, at least for this case since I was after a rough finish

however for general use going forward it looks nice and smooth. If I’m honest I’m be never to date used primers other than rattle cans for figures as I use primarily Tamiya for airbrushing

It’s therefore also introduced me to tip drying for the first time and I also found out that Tamiya airbrush cleaner doesn’t work too well in cleaning out the primer ending in a congealed mess.

I also got to try out the VMS paper shaper I’ve had for a while for a small tarp on the back.

Just got to figure out some Tamiya paint mixes for French AFV now. Painting guide calls out for a dark yellow base and a red brown camouflage overpaint. Easy out of the bottle colours in the Tamiya range, but not sure if accurate for French AFV. 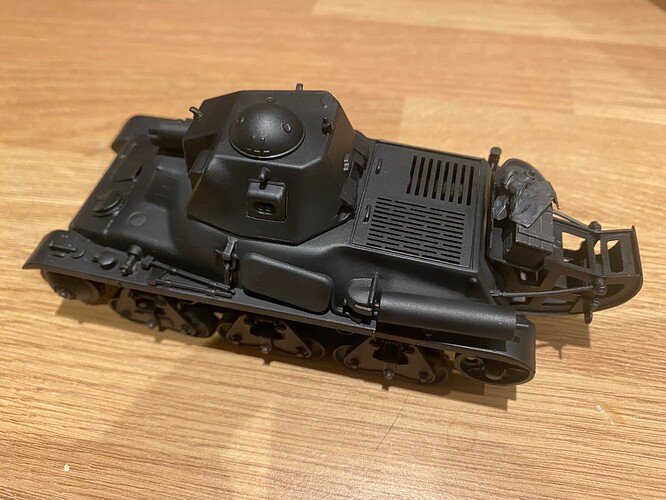 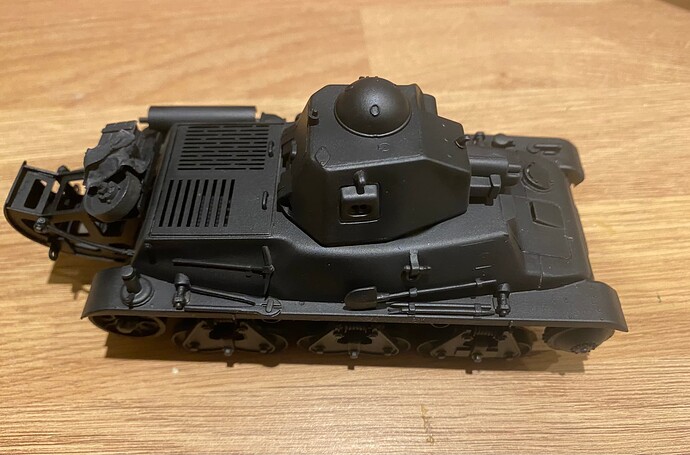 Tamiya airbrush cleaner doesn’t work too well in cleaning out the primer ending in a congealed mess.

Vallejo is a “pure” acrylic. Things like Tamiya cleaner, lacquer thinner etc… will react very poorly with it. Same with Mig/Ammo.

Glad you got it to spray nice. I could never get that stuff to behave.

ups, I don’t remember which paints use when I painted my model. Sorry in this point I can’t help you. I made it a long time ago.
Omar

My too use cleaner for glass, when I see that it starts to clog, I take out the airbush, and wash it with detergent and hot water.
Omar

So put the base coat down. Couldn’t find too much info on mixes for French camouflage, so went by eye.

For the red brown I used Tamiya flat brown (XF-10) 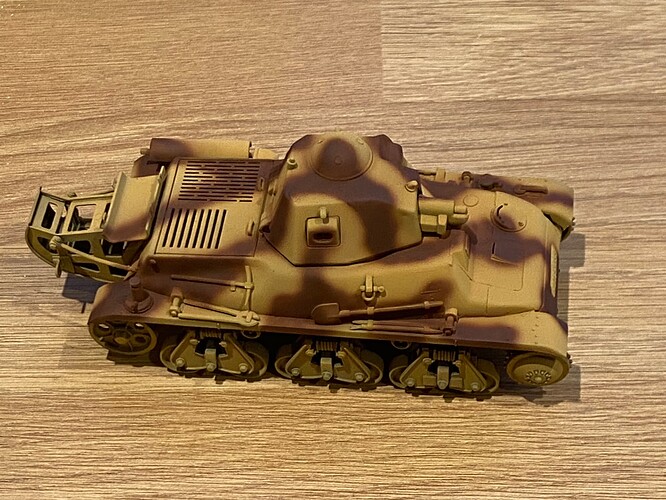