LOL…and that is why I said in most cases

I have always been a proponent of ‘less is more’ when it comes to chipping etc. If I dont have a good reference photo I start with the bare minimum and slowly work up. I have found that after just some minor weathering, chips and wear that the model looks right to me.

Obviously that is not the case when you are following a photo that shows exactly what wear and tear the subject has.

If you read that, it’s not accurate. I know it’s been repeated in plenty of books, but that doesn’t make it true.

Well, then can you provide a link to a source that explains how it isn’t true? Otherwise what you say is no more valid than what Tank is saying.

I agree. I would be interested in where this started from @Dan_Egan. I know I have heard something similar for aircraft so I don’t discount it might be a “rumor”.

The Stalingrad Tractor Factory was still producing T-34s on October 16, 1942 when troops from 24. Panzerdivision and 389. Infanteriedivision were finally able to capture the factory, which had continued producing tanks since the Germans reached Stalingrad on 8/23/42, despite an assault on the district by the XIV Panzer Korps on 10/4, and more than 900 individual sorties by Luftwaffe aircraft on 10/14 and 10/15. When Soviet forces recaptured the factory, several tanks were assembled from the spare parts scavenged in the ruins, driving them straight into battle, still unpainted and without gunsights, having to be aimed by sighting through the barrel, a testament to the level of desperation at that point. More information can be found in Stalingrad, by Sir Antony James Beevor (1998).

Pretty sure this happened at Stalingrad. They didn’t even bother painting the tanks in some instances.

I belong to the group that thinks chipping is overdone, especially on WW2 vehicles. Late war German vehicles had a very short life. Looking at Normandy for example, Panther battalions frequently lost vehicles that were virtually new. They may have got dirty very quickly, Normandy in 1944 was both rainy and very dusty when the sun came out. But chipping of carefully applied paint, other than battle damage, no. On the Eastern Front, there are isolated cases of vehicles mainly non-combat vehicles, lasting long enough to be repainted in the field from Panzergrau to Dunkelgelb. Likewise DAK vehicles were overpainted in theatre with possibly inferior paint stocks, but would they chip, or more likely abrade on edges?
Conversely post-war vehicles may actually look more battered as they have a much longer service life.

Which is why some contests elevate the tables. This, combined with bending/kneeling down, brings everything to eye level. The old Patton Museum at Ft Knox had a rather crappy battle diorama in an enclosed table that you looked at using actual tank periscopes. Made even that scene look much more realistic.
Ken

Model railroaders have been lifting their layouts up near eye level for years. Simply because that’s our perspective on the world.
How many birds eye views are there that were taken during WW2?

Have fun and do it your way.

I look at it this way: if you want to rust out a tank, there’s no reason it can’t be sitting in a post-war scrapyard awaiting the breakers torch. And while the modern US/western military is probably not going to let one of their vehicles get more than a little bit of rust, there are plenty of examples of militaries with less-than-optimal paint budgets that let their vehicles get eaten alive. Do what you want to do with your model!

It’s been reprinted plenty of times, but that doesn’t make it true. I’ve never seen a shred of evidence.

When I make photos of finished tank, I always try to imitate human perspective using a “far” photo distance and crop out the unnecessary surrounding areas. The result is a tank looking realistic. 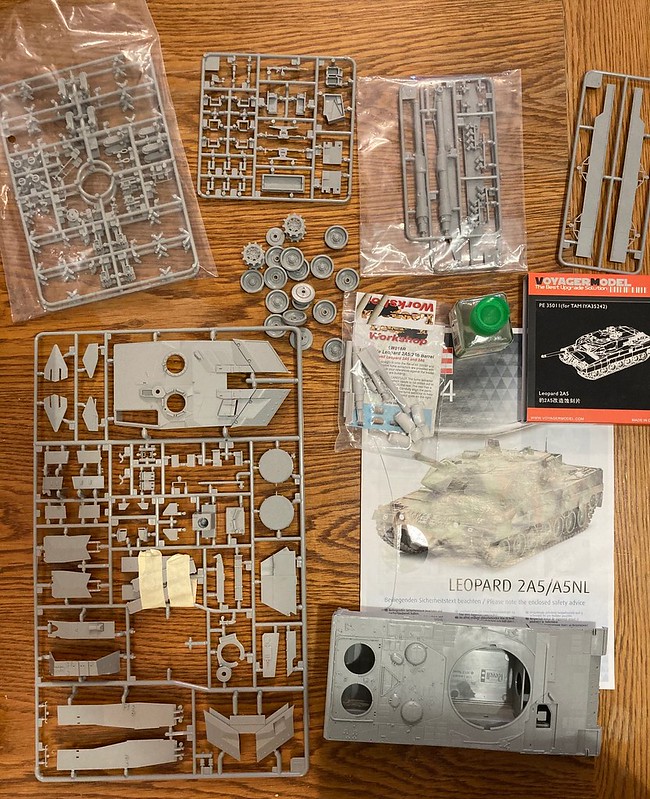 (Click on the photo to enter the album and scroll down for the finished model photos).

Of course some photos taken from bird eye view to document the result more detailed but still my approach is to create a realistic look.

Back to the topic: this Leo also has minimum wear but quite a lot if dirt and mud. I do not like the heavy chipped-worn look, preferred nowadays since Mig Jimenez introduced it. I like his works but disagree that his approach should be the desired standard on a contest.

That is not so.

STZ stopped work on October 4, 1942. Even during September they had ramped production way, way down (no surprise there) building only 16 tanks and repairing about 90 others. When you consider that from January till August this plant built well over 2,000 tanks, it’s obvious that production was shutting down as the battle began. Building 16 tanks was just a couple days’ work. So there were almost certainly no tanks rolling out of the plant into combat. Again none of this should surprise us.

Cool page…but that one bit is not accurate. I posted elsewhere here in this thread that the plant was shut down as the Germans were reaching the city.

I happen to think that the modelling fad - perhaps that’s too harsh in our never-ending quest for realism - has gone too far; let’s face it, unless you’re modelling aT-55 in downtown Somalia, then try and keep it to a minimum. I’ve seen trucks portrayed as in the Western Desert as though they’ve just been consigned to the scrap-heap. C’mon folks! What do you think the Troop Sergeant has been doing all his life? Allowing his vehicles to deteriorate to that degree? Factor in the military factor for God’s sake, and if you are not familiar with the military ethos, then seek out someone who has, indeed, been in charge of someone. Keep the rust bucket effect - generally - for something else!

Phew! I feel better now; however, (there’s always a “however” - normally on my annual confidential reports) see the details below on the top of a Chally 2 turret: 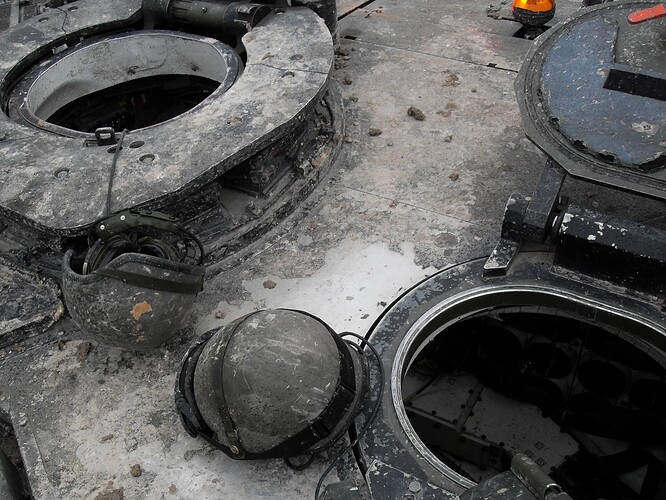 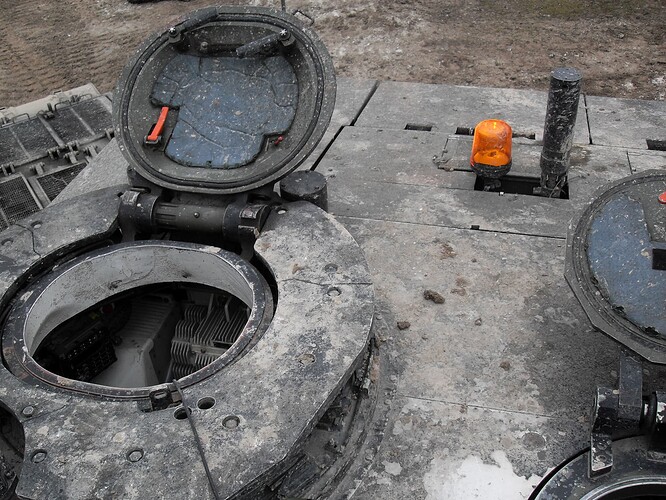 Whilst mostly covered in mud, the area between the 2 hatches was worn to an almost chrome effect given that it was down to the bare metal; portray that on a model! (as indeed I will one day). Slightly more than mere “chipping”.

All for what it’s worth of course.

Having seen this no modeler should debate on the “British(?) NATO green” or “Bronze green” color authenticity from any paint manufacturer’s selection. One would rather select a gallon of “mud and dust” paint, randomly spayed onto any dark greenish-brownish base coat to have the desired “realistic look in the field effect”…

If you have more photos from the same scenario, pls share with us!

This illustrates a great point IMO: chipping might be overdone, but dirt is probably underdone. It only takes a couple minutes of crosscountry driving to completely cover a vehicle in crud.

To both Tamas and Dan: well, here you are guys, a selection of pictures when I accompanied my son (Chally 2 Driver) on a very privileged sojourn on a Saturday morning one Autumn. You will note that hardly any of the tank’s original black and green scheme have survived a mere 3 hours or so driving over a training area: 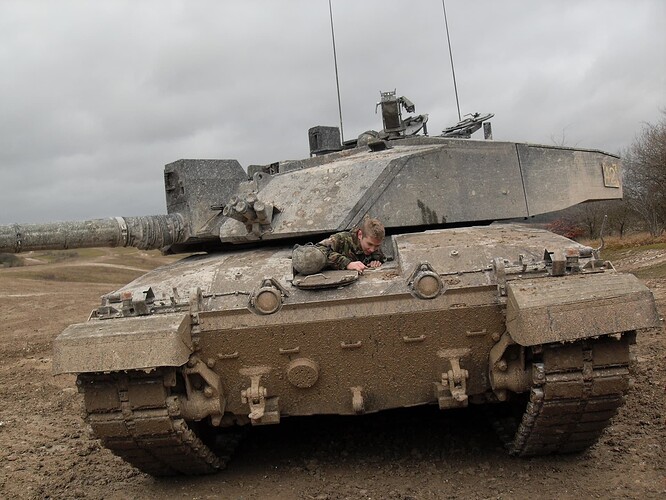 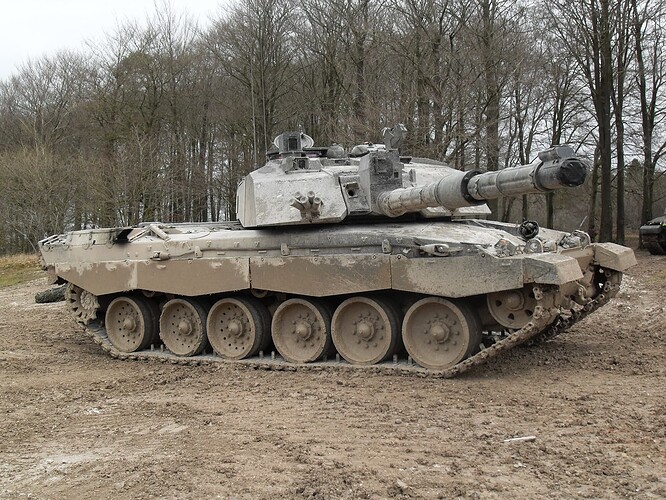 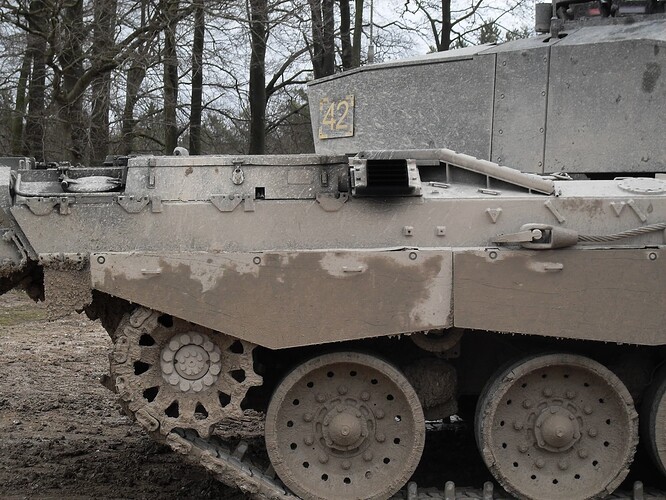 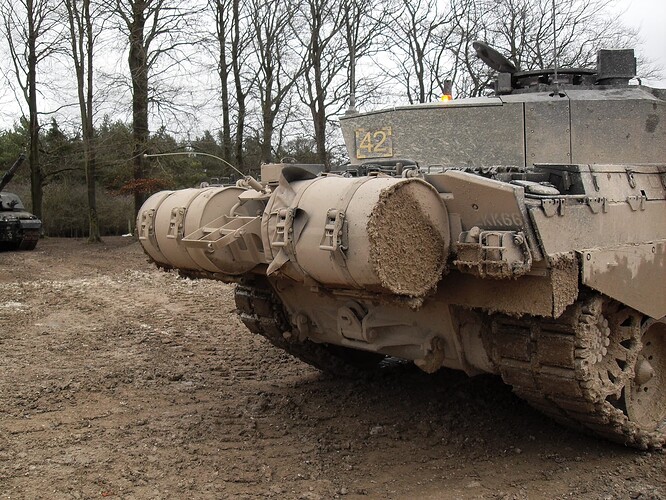 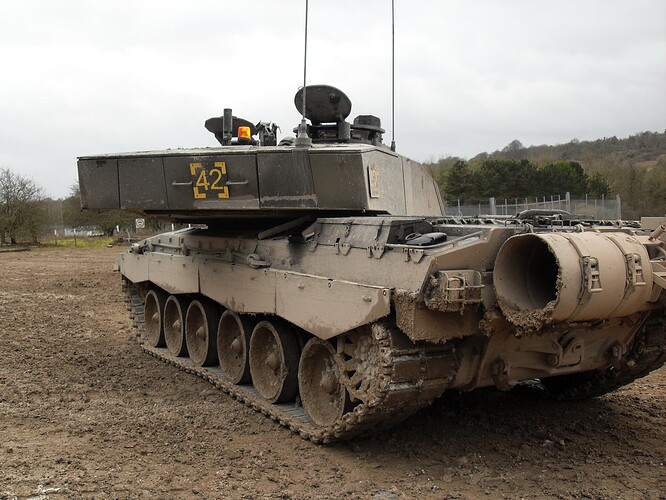 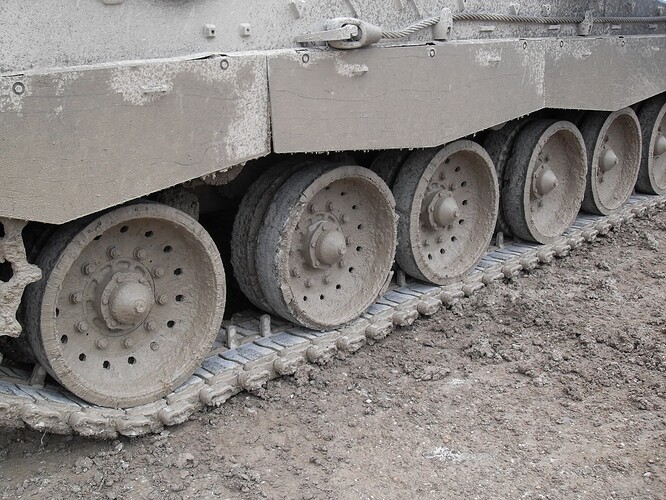 From a modelling perspective, it was the practice of this particular unit to cut off a lid from the fuel drums and use them to stow camouflage nets and the like, the aperture being secured with plastic sheet and a bungee.

Perhaps that’s enough! And I’m sure you’ll get my point. I was indeed building a model of this tank, but it sort of got delayed when my son was seriously wounded in 2012; I’m sure you’ll understand why, though I’m not claiming any great excuse for abysmal modelling. There are far more pics available of that day, which I think must have been back in, roughly 2009-ish. If you guys require more specific shots let me know by the personal message system and I’ll do my best to oblige.

Anyway, I hope this helps to the general thrust of weathering/wear and tear etc as a topic.

Of course, if you ever espy a 1:35 Chally 2 on the display tables covered more or less in dark earth and Tamiya Buff, it will probably be mine!

Dan you are so correct in my opinion. Our vehicles got filthy to say the least in Hohenfels Germany in a very short period of time. We spent 7-10 days in the training area if my memory serves me. This was during winter/ spring with tons of mud.