I keep it to an absolute minimum and just do it around hatches and engine compartments etc.

I would have guessed the lighter tones were some shade of yellow, whether for DAK forces or Europe would be harder to tell. Knowing something about the vehicle changes over time I knew it was likely to be one of those since the Tiger is not an early model. The other tone would be a bit harder but admittedly I would go with a shade of green since the red-brown tends to contrast more with the yellow.

I would not have guessed gray with brown secondary as the contrast was even less between those two and that scheme was dropped very early on.

One of the key elements that made paint durable in the past is the lead content. Made paint very hard and therefore difficult to scuff or chip significantly. As for chipping keep in mind that in 1/35 scale a chip/scratch 1/35 of an inch would equal to a 1 inch chip/scratch in 1/1 scale. In my opinion it is usually overdone although it seems to be a trend and many think it looks cool. For me less is more when it comes to chipping. In the end however it’s each individual’s own build and if you like it then hey, go for it.

Chipping? What chipping? I don’t see any chipping! Just having some fun here but you have to admit that these images of a knocked out Panther and those in the junk yard show little evidence of chipping. Clearly the splatter from the penetration on the Panther 302 has left a mark but that’s not what we’re talking about. Maybe a closer look would show some but these are pretty good quality pictures. Again, this might be related to the short “life scan” of these particular vehicles but the fact of the matter is that this is what they looked like at the end of their use. 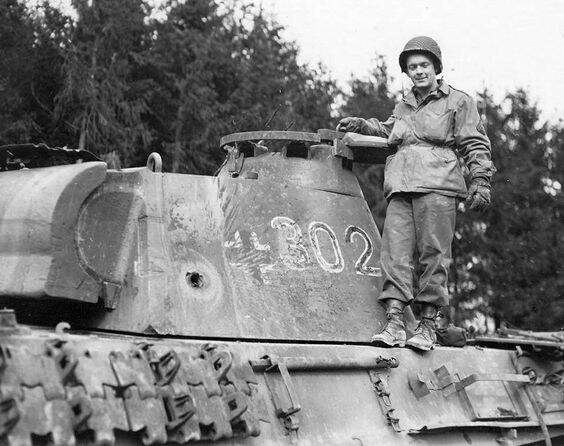 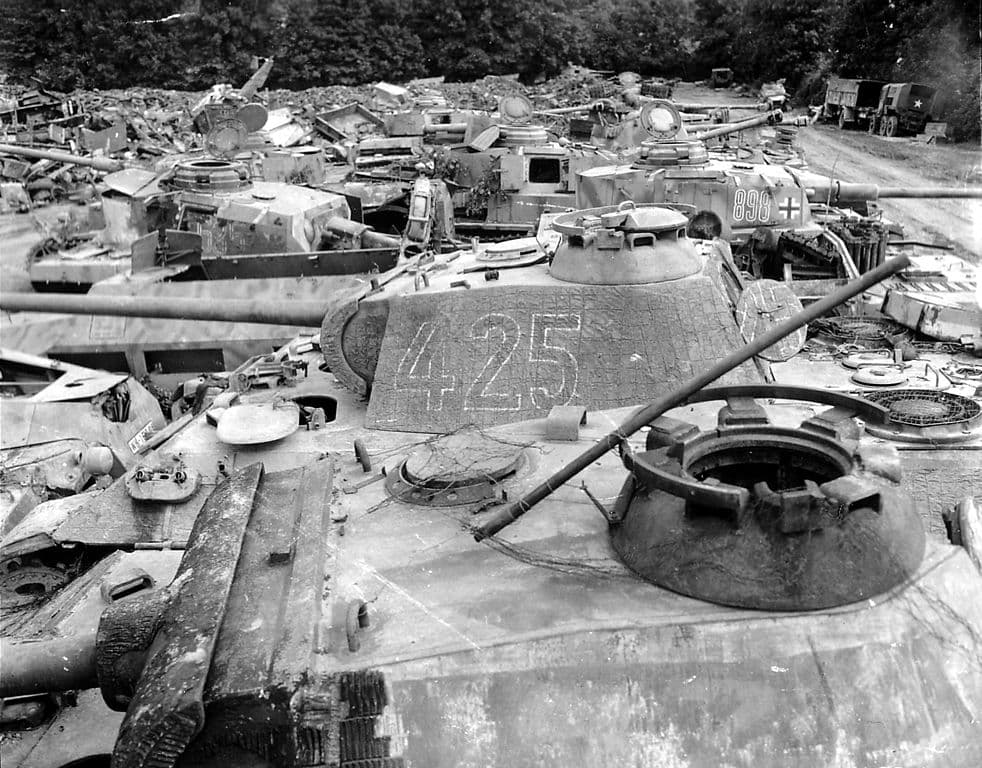 The comment from Dioramartin has me a little perplexed. Is there a suggestion that there are good color photographs available from WWII that are not be used as reference? I would love to know more about how to access those pictures.

there are records of Russian tanks driven out of the factories and being destroyed within hours.

That is simply not possible. There have been long debates about AFV lifespan, none of which have much data behind them. If records exist, please share them with us.

That would be great if all the data required to be objective were available. It’s usually not, which is why we enter the realm of the subjective, and why we have these interesting discussions.

I find these two pics to be useful references. Note the hand oils atop the turret fixtures of this M4A2. Darkening areas where elsewhere is thoroughly embedded dust everywhere else.

The second pic shows the shininess of tracks that have just run. The third shows how prevalent dust/dirt was and how crews would wear off “clean” spots. 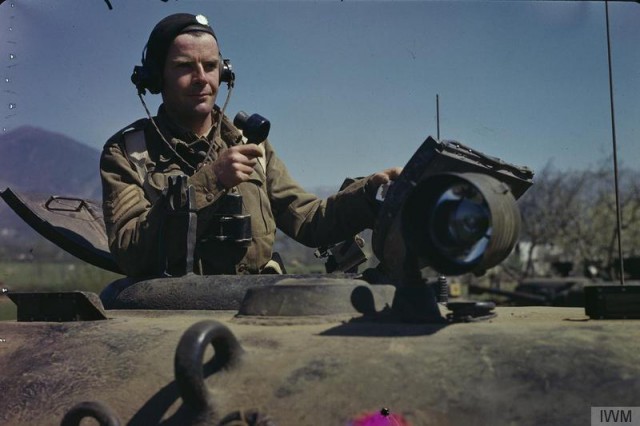 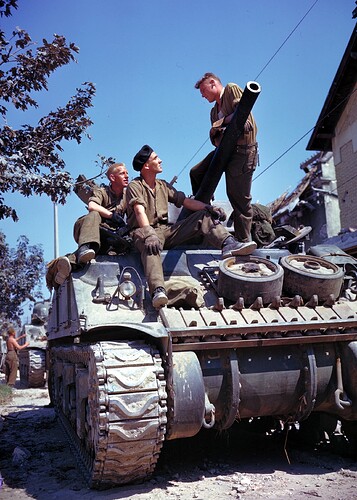 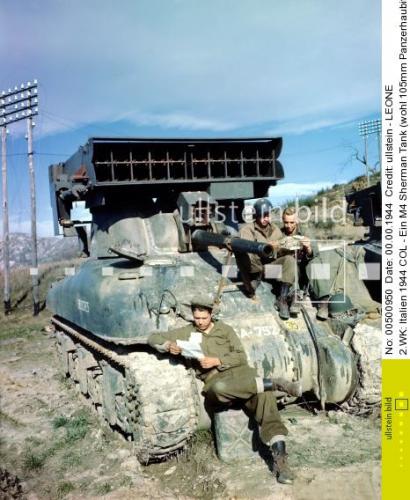 The hand oils on grab handles are a great insight. This a place where I would typically place some chipping but I think I will try something different, and maybe more realistic, next time. Thanks Roy.

I remember reading about this, situated at the Leningrad-front during the siege of said perimeter.

Many modellers seem to think that this: 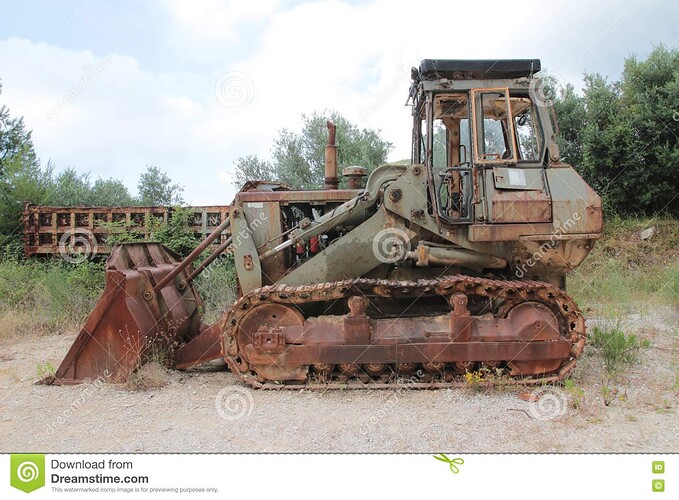 is a relevant reference for a tracked vehicle built in the middle of a war that
lasted 5 years.
A 20 year career bulldozing isn’t the same as a year or two in a war

I recall reading the Volgograd Tractor Plant in Stalingrad making T-34/76’s till the German advanced on the plant. They where said to be fighting in primer color and not traditional 4BO green.

Regarding “realistic” or “life-like”…

I realized, it’s totally different seeing the tank’s hull at eye-level and turret above your head. That’s the view typical of standing on the ground beside a Panther or Panzer IV or M1A1 but with models we’re typically looking down from above.

One can hold the model at eye level but that sort of spoils the effect. The Tank sitting on a shelf or display table and looking down on it basically blows “realistic” tank model out the door…at least for me.

With a shadow box and forced perspective the angles and viewing height can be addressed. That makes realistic very possible.

Otherwise even the perfect model tank on table is being viewed as if from a low flying helicopter at 75 to 100 feet of altitude…not realistic in most cases.

Basically “realistic” is impossible to achieve for a model tank regardless of paint or weathering style. It’s also necessary to have the correct viewing perspective.

The viewing and presentation angles are wrong under normal circumstances for the model tank on display to be believable by the Mark 1 eyeball.

unless you are an attack helicopter pilot … 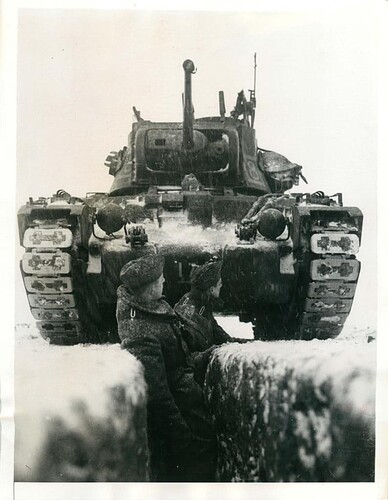 LOL…and that is why I said in most cases

I have always been a proponent of ‘less is more’ when it comes to chipping etc. If I dont have a good reference photo I start with the bare minimum and slowly work up. I have found that after just some minor weathering, chips and wear that the model looks right to me.

Obviously that is not the case when you are following a photo that shows exactly what wear and tear the subject has.

If you read that, it’s not accurate. I know it’s been repeated in plenty of books, but that doesn’t make it true.

Well, then can you provide a link to a source that explains how it isn’t true? Otherwise what you say is no more valid than what Tank is saying.

I agree. I would be interested in where this started from @Dan_Egan. I know I have heard something similar for aircraft so I don’t discount it might be a “rumor”.

The Stalingrad Tractor Factory was still producing T-34s on October 16, 1942 when troops from 24. Panzerdivision and 389. Infanteriedivision were finally able to capture the factory, which had continued producing tanks since the Germans reached Stalingrad on 8/23/42, despite an assault on the district by the XIV Panzer Korps on 10/4, and more than 900 individual sorties by Luftwaffe aircraft on 10/14 and 10/15. When Soviet forces recaptured the factory, several tanks were assembled from the spare parts scavenged in the ruins, driving them straight into battle, still unpainted and without gunsights, having to be aimed by sighting through the barrel, a testament to the level of desperation at that point. More information can be found in Stalingrad, by Sir Antony James Beevor (1998).

Pretty sure this happened at Stalingrad. They didn’t even bother painting the tanks in some instances.