I’ve been using a paasche talon airbrush for a few years and love it. I wanted to add an air filter moisture water trap to it as well as to help with my regulator already on my compressor. I recently bought a set of three off of Amazon and i was led to believe they would fit.

Here is the link to them. What do i need to convert these to use with my airbrush and compressor or can someone point me in the direction of an water trap air filter that would fit immediately to my airbrush? Thank you in advance !

I assume the issue is that the Paasche AB and line are not 1/8" BSP threaded like the traps are. So what you will need is an adapter that fits the AB and also adapts out to 1/8. You will need 2 different ones - a male adapter and a female adapter by the looks of things. One that the AB screws into the top and the trap screws into the bottom, and one that screws on the bottom of the trap and the hose screws at the bottom of that adapter.

This is one of what you need: 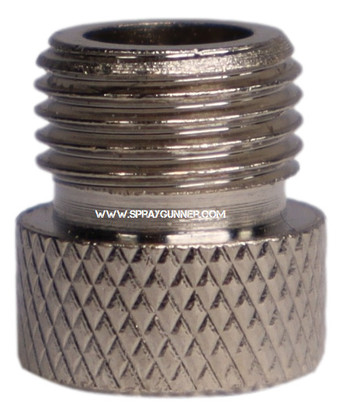 @petbat yes that is the underlying problem. I don’t want to waste money buying multiple sets of threads hoping one works. The problem also that the hose won’t connect as well as the airbrush.

Here is my airbrush set up that i bought. I’m really looking for what i need when it comes to converting this all.

Do you realise that big glass thing under the pressure gauge is a water trap? 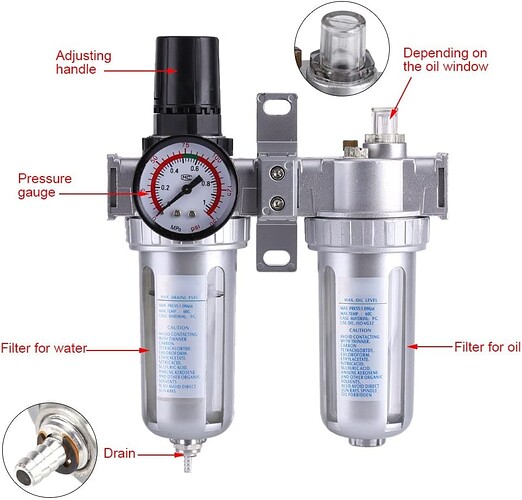 Are you worried about condensation between that and the AB?

I think your issue is actually finding an adapter to change the 1/8 on the bottom of the trap to whatever Paasche use. All the adaptors seem to be just to allow you use a 1/8 Hose direct to the AB.

If I can suggest it, try and find a local store that sells compressors, airbrushes, air guns etc as often they have all sorts of fittings and may have some to suit. My LHS actually has adapters in stock as they sell ABs. Take the AB and Hose to them and see if they can help. They may need to order parts in but at least if they are wrong, you won’t have to pay for them.

I agree with Peter, you already have a moisture trap but reading a few reviews it appears it might not be up to the task.

Take a look here or call them for help.
https://www.dixieart.com/Paasche_Hoses_and_Manifolds.html#hoses

@petbat yes the moisture trap, sorry I’ve never taken the time to learn the bits of my tools as i should have. My moisture trap appears to keep water/ condensation for days even when i don’t use it. I notice my airbrush keeps spitting out water so my next logical step would be to add another moisture trap and then buy a new one for the compressor as well.
I agree i think I’m going to go to Hobby Lobby and take a look at what they can do. Unfortunately Columbus Georgia doesn’t have that many hobby stores in the immediate vicinity.

@Tank_1812 thank you for the link, I’m going to call them after work. I’m not sure if i just need to replace the whole moisture trap and gauge or how often i should replace it. I’m leaning towards getting another one though. Is there a time period for how often it should be replaced? I’ve had this compressor since 2019

I don’t recall people ever replacing unless they broke the glass. I think if you drain the water trap that should fix your issue. Not sure on that model. Dixie Art has manuals online but that is not clear looking quickly. The new ones you got is similar to mine and I have it for about a decade or more. You push the little pin in to drain if needed.

@Tank_1812 ill try pulling the glass off tonight. I was always afraid of breaking the regulator and water trap on my setup so i always left it as it was.

You should not need pulling the glass, as Ryan said push the pin to flush the water on the trap.

@Robin_Nilsson i just have a compressor no tank on top of it if that’s what you mean, i wonder if that’s a problem in itself?

Poor soul …
A tank cancels out the pulsations caused by the compressor (piston type compressors create a lot of pulsations, the quieter fridge-type compressors make less pulsations).
The tank also acts as a large water trap → needs to be drained regularly otherwise rust will eat it from the inside out.
I never had water or oil in the trap by the regulator, forgot to drain the tank since there was no indications of water → tank rusted through

@Robin_Nilsson sounds like i have an beginner set up at the moment and need to look at upgrading in the coming year? How often would you recommend buying a new compressor?

I would buy a new when the old one is worn out.
I will replace the tank on my SilAir compressor to keep it in operation, the new, vertical, tanks will be rust protected with air outlet at the bottom to drag the moisture out.

The choice between a silent (expensive) and a noisy (not dirt cheap but dang close) depends on Your situation. If I could stick the compressor in a garage I would have a cheap noisy one and a long hose to the spry booth. I live in an apartment so a loud compressor is not an option for me.
A large tank (noisy compressor gets you a bigger tank for the same $$) allows you to consume air with the compressor turned off and then refill the tank when noise isn’t a problem.

It all depends on Your situation. My first rattling tank-less little compressor got swapped out after half a year, my second compressor (the SilAir) is still with me 25 years later even if it is temporarily out of commission. Regular maintenance will keep them running but it all depends on the quality of the product.
A compressor used professionally will run lots of hours every week and will wear out faster than one of ours when we use it less than an hour per week (depends on model building rate). If you crank out one build per week you will airbrush more than those who bbuilds one model per month or per year.

El cheapo compressor from a DIY shop could be a good option, depending on Your needs

@Robin_Nilsson thank you for the advice, depending on the kit and how detailed it is i could be painting once a week or maybe twice a month. Usually building a kit a month at my current rate. Thank you for explaining the difference in compressors. I forsure have a noisy compressor and the only thing that’s given me fits is the moisture trap/ air gauge. I noticed that my compressor automatic turn off wasn’t going off unless the psi was around 40, it used to turn off around 25 so i think that’s the only thing that has worn really.