Hello,
For my first build on here on the new site, I’m going to do ICM’s RNAS Model T Armoured Car. A little vehicle that only saw service in Russia and built in Tipton. A town not a million miles from where I live. 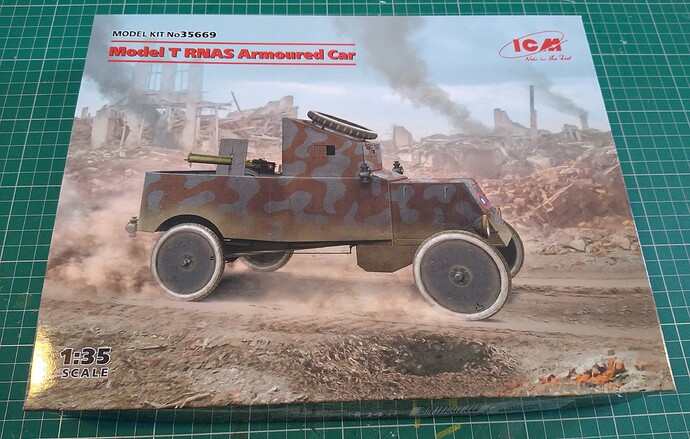 Looks to be a fairly simple and straightforward build. I’m hoping anyway!
Just two sprues to make up the car and a small one for the Vickers gun. 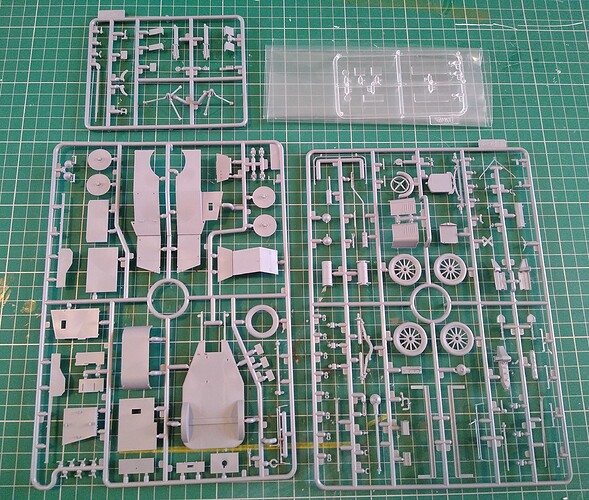 Giving some thought to swapping the Vickers for a Russian M1910 Maxim. Presumably ammunition would have been much easier to source than British .303. The vehicles were mostly used on Russia’s southern front and I can only assume that a reliable supply of British ammunition would have been difficult. That’s my theory anyway. Will have to do a bit of digging to confirm that.

You’re right! It definitely looks like it was cobbled together in a shed. Mad Max meets Little Rascals.

Just going to go with a simple OOB build. Add a little stowage in the back, but not much more than that really.

Built the engine today.
Pretty straight forward, no problems besides from awkward flash on some parts.
Besides from a coat of paint, I’m not going to do much more as it’s completely hidden under armoured bonnet.
Just the lower part of the sump is visible under the chassis. If you were building with the hatches open, adding wiring and other details would certainly pay off here. 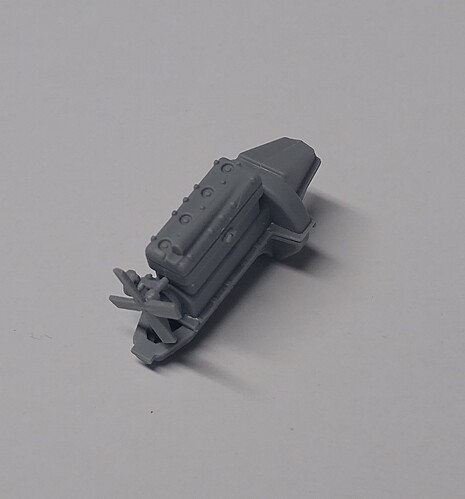 Little bit of work tonight.
Assembled the exhaust, filled some annoying ejector pin marks. All hum-drum stuff really.
One thing I needed to do was make a stronger join for the engine-radiator join.
The kit would have you butt join the the two together, but I thought this might be a bit weak as there’s not much to hold onto. I drilled a .5mm hole in each and put a plastic rod into the front of the engine. 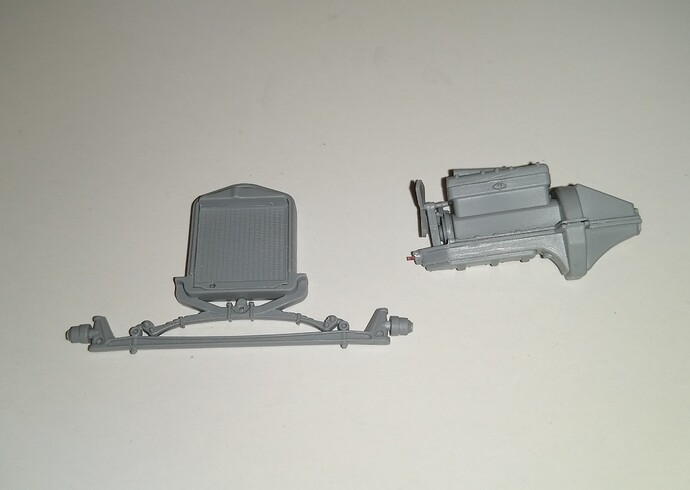 Result, a much better fit. 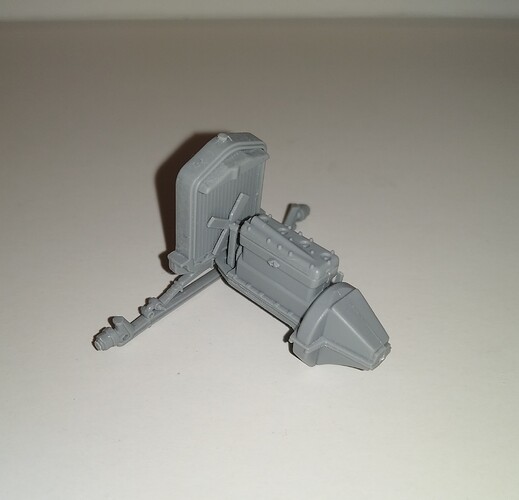 A little more research has turned up some photos that confirm that the vehicle was armed with a Russian Maxim. 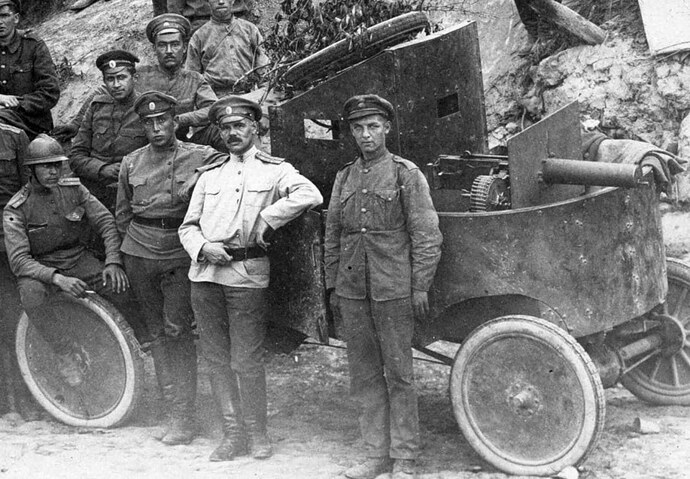 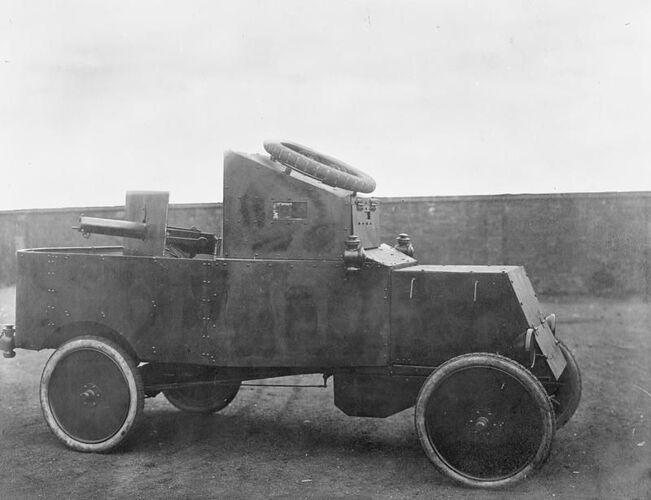 ICM’s Russian MG set is winging it’s way to me.

Some more work on the chassis. Fitted the rear axle, radiator and front axle and skid plates.
The engine and drive shaft have been glued together and loose fitted in place to make sure they set at the correct angle.
One thing to note is that you do need to trim off the radiator filler cap to make sure it fits under the armoured bonnet. 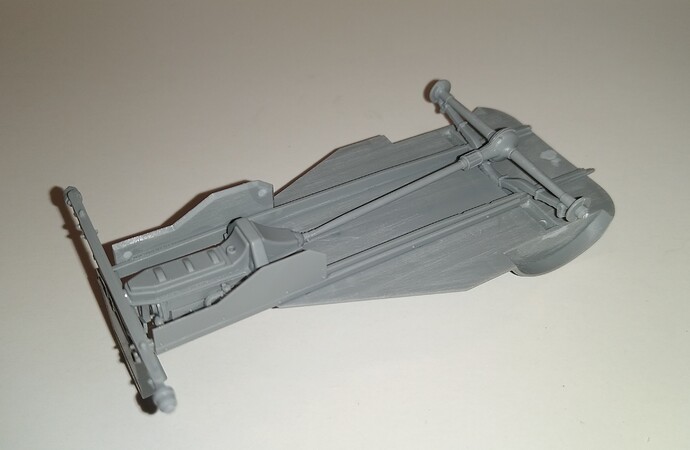 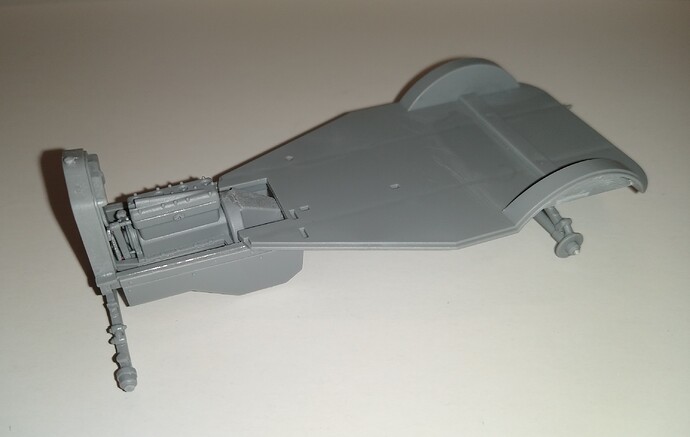 Painted up the engine. I used some photos of restored Model T’s I found online. Not much will be seen.
I also added some paint to underside of the chassis and axles. Just the areas that are going to be difficult to get at once the engine, drive shaft and exhaust are in place. I used Vallejo BS640 Dark Grey. I’m assuming they were painted Dark Admirality Grey judging by how dark the finish looks in photos. 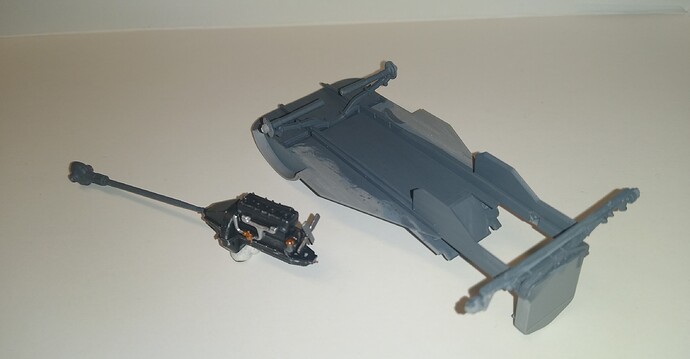 Also landing in the post today was ICM’s Maxim Team. Looks much more like what’s seen in the photos rather than the Vickers. That’s a welcome addition to my spares box. 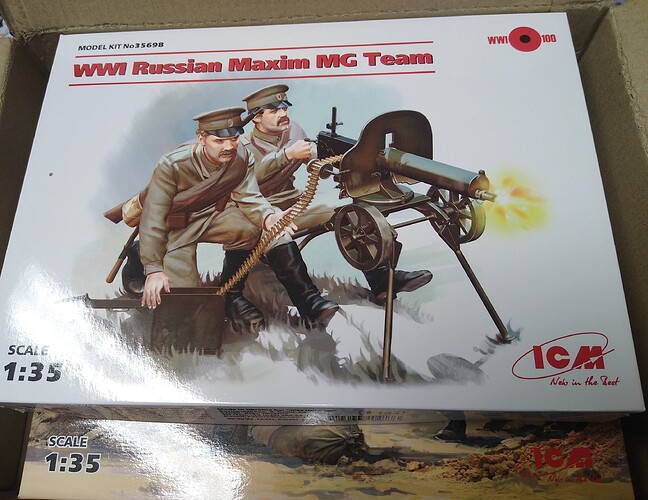 Are you modeling a vehicle in British, or Russian, service? No expert, but I think you’re making a mistake about the machine gun. One photo is of a Russian vehicle, and it is mounting a Maxim. The British ones are mounting a Vickers.

Thanks for your input Albert, I’ve been scratching my head over this for a a while and any references and photos that can help are appreciated. I’m still not fully committed one way or the other. The kit has Imperial Russian markings, but as I understand all RNAS vehicles sent over there had them applied. As for my decision on the armament, it’s based on the few photos I have found. From what I can tell they do seem to have a Maxim going by the smaller muzzle with no flash suppressor and deeper breech. The bottom of the breech on a Vickers is more or less in line with the cooling jacket. The Maxim and MG08 were much deeper as can be seen in the second photo. Can sometimes be hard to see that from certain angles, but I think that shot gives it away. The charging handle is also a little different when compared with this Vickers and the Maxim in the photo with the Russian troops. 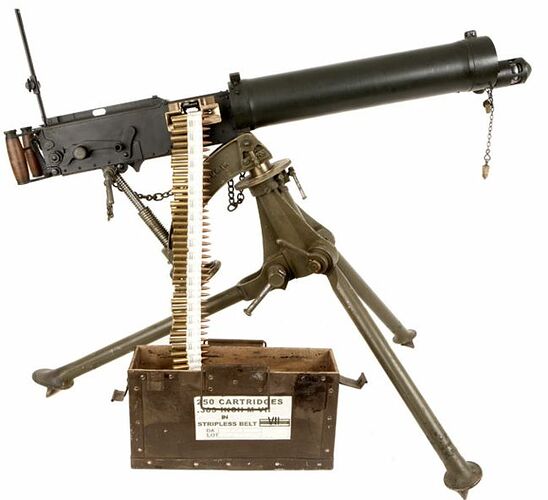 I did find this article a while back by Bryan Perret who states they were armed with Maxims, but gives no reason why or a source. I’m also bearing in mind that the article was originally in a 1979 issue of Airfix Magazine, so references were probably even fewer than now!
http://www.landships.info/landships/car_articles.html?load=car_articles/armoured_tford.html

It’s a bit of a gamble on my part I admit and I am basing it on the few photos I have found comparing against a Vickers. Best I can do given what I have found. If it turns out to be wrong, at least it’s something that can be fixed quickly if new evidence turns up. It’s more than likely that they could have originally arrived in Russia with a Vickers, but lack of supply of .303 resulted in refitting with a Maxim at a later date. It’s also possible the Russians could have repaired them when the RNAS left and put them back into service.
Now, what tripod the thing was mounted on is another question entirely!

From what I can see it looks like a Maxim…

On second look, I believe that you’re right, it is a Maxim.

No worries, always welcome a second opinion. The 3 machine guns are all basically the same and can be difficult to tell apart unless it’s a clear photo.

I could be wrong, but I think this photo could have been taken at the WG Allen works where they were built. It’s very clean and generally looks unused. In the early 2000’s when I was at Wolverhampton University, I spent the first year at their campus in Dudley. Going to and from Walsall where I lived on the bus, would take me through Tipton and past the old factory. Remember a brick wall like that running around the outside.

Dig a bit of digging around this morning and found their sales catalogue and a later aerial photo. I think it was probably taken in carpark to the left. 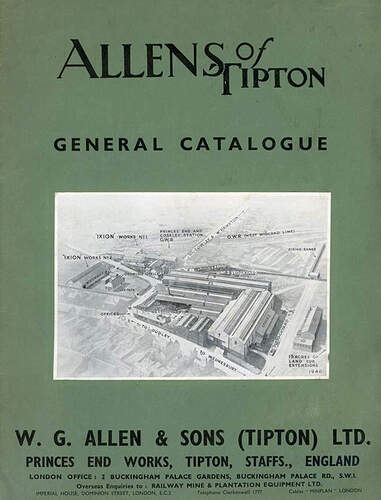 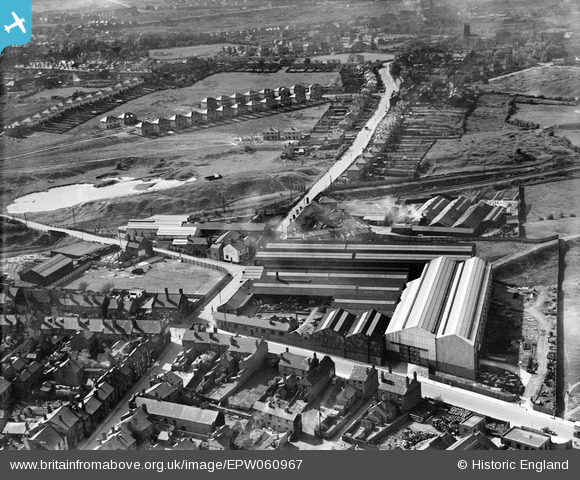 Again, while no expert, I would think that while vehicles in Russian service would use the Maxim, British vehicles would probably use the Vickers. Just my two cents.

Ordinarily I would agree, and noticing that it was a Maxim in the back is what got me digging around for more information. Unfortunately photos have been few and far between and those two are the best that show the gun. The car had a very small production run of 9, 6 of which were deployed to the Southern Russian front with the RNAS. And this is possibly why the Maxim was chosen as there was a much more ready supply of 7.62 ammunition.
Before the companies absorption by Vickers, Maxims were built in Britain in a variety of calibres, including .303. It’s possible, especially given the guns reliability and longevity, they could have been old .303 Army surplus put back into service. Maybe even rechambered and rebarreled? A lot of possibles, maybes and guesses I know, but just thinking out loud here.
It would be interesting to find the original order documents and answer all these questions.

Sometimes you just have to take your best guess, and wait to be proven right or
wrong. The missing clue always seems to surface after you’ve built the model.

It’s about all I can do based on the evidence I can find and some sort of logical deduction on my part. It’s very difficult when you’re dealing with something from over a hundred years ago that was poorly documented.
I could spend years trying to find the answer, but would never get it finished! And I really do need to get this one back on the bench.
I think the Maxim is a little different to what we usually see. The feed spool on the gun shield is certainly an interesting feature.

While looking I also found this photo of the Pierce Arrow Armoured Car, also built by WG Allen, with Royal Navy and Russian officers stood in front. Seems to be the same works yard as the Ford was photographed in. 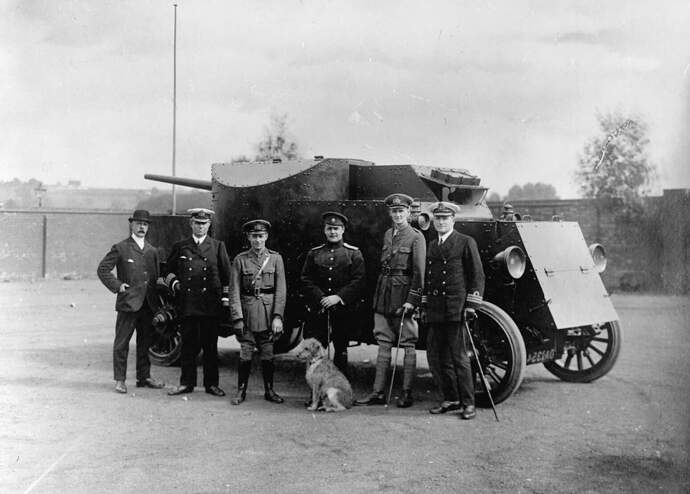 Now this would make a very cool model! Hoping CSM will do it if they continue with their armoured car range.