Hello everyone, I was scrolling through the Centurion group build, and like others have noted, neither AFV Club, nor Amusing Hobbies includes the mantlet cover.
It seems like everyone went with the DEF models resin piece instead of the AFV flexible vinyl one.
I am not crazy about doing surgery on a model kit if I do not have to…what is the issue with the AFV Club mantlet, that no one is using it?
Does it only work for the AFV Club version, and not the Amusing Hobbies version?

At the end of the day which kit is better now that some time has gone by, and the Amusing Hobbies version has had a chance to be built?

Thank you in advance.
Eric

If you read through that Centurion group build, it will describe which is the best one to get. I and someone else (maybe Mead or CanMedic) bought the wrong DEK model one and had to convert it to resemble the correct type. The survey on the front of the turret was pretty easy and straightforward… But read through the build thread and that should steer you right ok

Thank you John, I did not mean which was the best mantlet cover, sorry, I meant the best version of a Shot Kal. Seems both kits have their ups and downs. At he end of the day, if you had to choose, which one would you get?

I was one of the unlucky ones who bought the wrong mantle and it stalled the build. It was the straw that broke the camels back so to say. There are number of inaccuracies in the AFV club kit and this put me over the edge.

Ah ok got ya. I did the amusing hobby shot kal Alef, and found it very nice, nicely detailed and went together well, tracks were indi link but super easy to do. I would happily get another, but others may like the AFV offering, sometimes you just got to go with what you feel

If I may, depending on what you want to do with your build you can choose both kits.

Amusing Hobby has a better/easier suspension, hull and track system.

If you want an easy build go with Amusing Hobby. If you are looking for accuracy and tend to be a bit on the nitpicking side of things go with the AFV Club kit.

Regarding the mantlet cover, the AFV Club kit includes a vinyl cover but it is a bit thick and does not conform to the shape of the mantler easily. You can always build the cover yourself, takes some practice but it is nothing difficult. The Amusing hobby kit has the covel molded in plastic

I remember reading that about the only thing that would keep the AFV Club mantlet in place was gorilla glue. I generally make mine myself.

Nikos, thank you for your suggestion, and I think that I am leaning towards the Amusing Models version, that picture you attached, does that come in the “Valley of Tears” boxing, or another one. I was under the impression that neither kit came with a mantlet cover?
Thanks,
Eric

It is from this kit, indeed the Valley of Tears kit does not include the part with the mantlet cover, but to be honest, the kit itself does not represent a 1973 vehicle, the configuration is of a later vehicle. 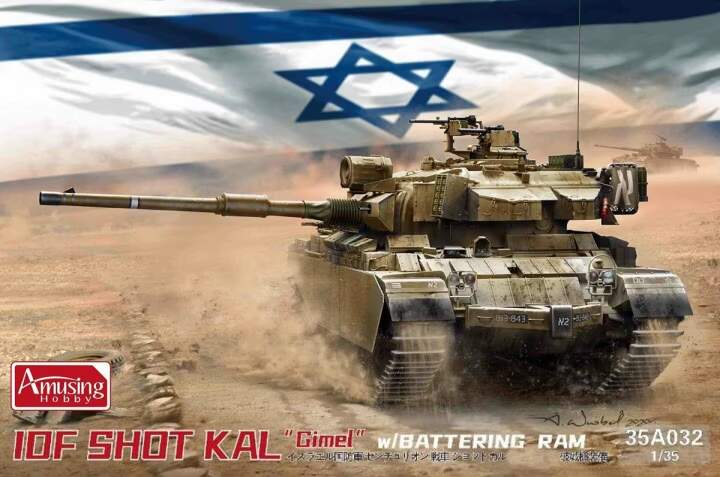 And I just realised that we are talking about a Shot Kal and not a Shot Kal Gimel but my initial comment stands.

Ok, that is what I thought. If i do not build it with the loaders MG, and the .50cal on the mantlet, does that back date it to the Valley of Tears era, without rivet counting?

Yes, you can compare with some photos and see what you should not add to the model, mainly the loader’s MG and the .50 cal

Ok, great…thank you Nikos and everyone else for your help and advice.