What kind IJN ships would carry AFV/Trucks etc. (early war) on deck, in cargo hole or both? any kits? photos of landings would be Great.

Good question. Japan lacked purpose-built invasion ships. IJN requisitioned transport from civil owners. They relied on their transports to carry the cargo, and Daihatsu landing craft (barges) to truck them to shore. Cranes would transfer cargo from the ship to barge. Troops would also be landed by launches.

Both the Japanese Navy and Army had their own transports. (They did not play well together - the Army even had its own aircraft carrier!)

It was not until after the disaster of Guadalcanal that Japan designed purpose-built landing ships, but really nothing comparable to an LST.
# Dai 1 Go-gata Yusokan
IJN No. 1 Class Fast Transport
http://www.combinedfleet.com/T.9_t.htm

Found this image of daihatsus along a transport 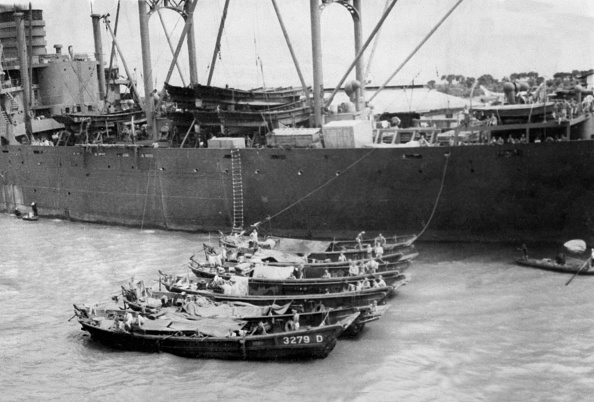 World War II in British Malaya Motor junks next to and on a Japanese...

World War II in British Malaya Motor junks next to and on a Japanese troopship which were used for Japanese landing operations all over South-East Asia - without further details, in a Malaysian port... I think Tamiya, Hasegawa and Aoshima did, too. Skywaves does.

Thanks Mate, I have over a hundred books, and then there is the net, but still can’t find any IJN troop or supply cargo ship being loaded/unloaded, but of course I can just use my imagination.

Hi Robbd01, got that kit, got just about all items for a 2’ x 3’ 1/700 scale IJN Harbor, just need photos for trains/crans loading unloading ships at dock.

Thanks for the pictures JPTRR, That are the scenarios I’m looking for.