My dad flew Seakings in the 60’s as a pilot in HS-11 off the USS Wasp. Anyone know of any decals sheets out there? Lack current equipment and the know-how to do my own, while I can piece together the generic markings its the squadron emblem for the “Dragonslayers” that will stump me. He’s passed on now and I wouldnt mind having a model of one that he had flight time in on the shelf. 1/48th for that Hasegawa kit would be ideal.

Repli Scale is the only kit or decal sheet that I know of that has HS-11 markings. 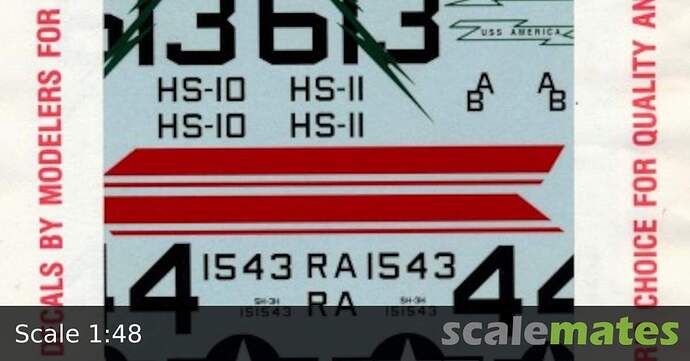 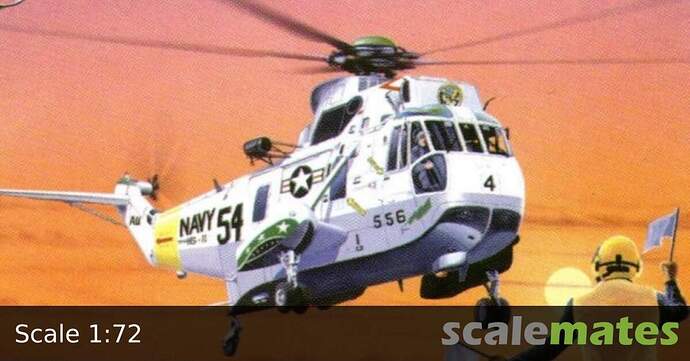 Moved to the Rotary Wing Forum to (hopefully) get some more answers.

Thanks, that Repli-scale sheet is about 6 years past my dads time frame and doesnt have the squadron logo. Think this is going to be a tough search and I need to do some gameplanning. The squadron logo was a dragon in a circle with a lightening bolt going through it if I remember, of course full color etc and not too big but would be noticeably absent. I may end up having to scrap up from multiple sheets for the USS WASP in the right size along with the squadron and aircraft numbers but I think I’m going to run into a dead end on the logo at this point. Found that sheet on Etsy for $39.00 USD, pretty steep but out of print unfortuantely…and doesnt have the magic item I need.

Is this it? If so, you could always try printing it yourself on home printer decal paper. You would just need to size it and print it off. 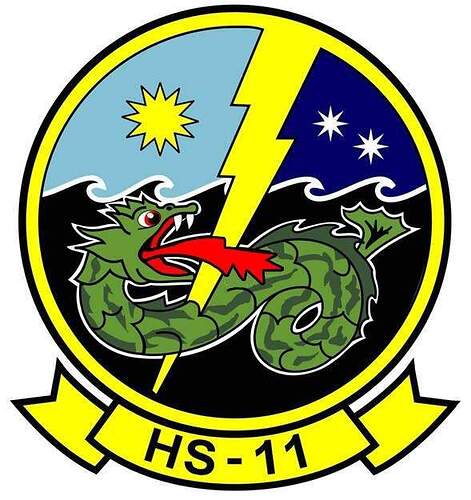 You the man, that is the ticket. I’ll have to try and see if my printer will give me some suitable results. I think the only place it appeared was the wind deflector (?) on the top of the fuselage in front of the engine below the rotor mast. At least thats all I recall from the black n white picture someone took of him lifting off the Wasp circe 67 (2 years before I showed up on the scene). My masking skills at that scale are beyond me. Think I’ll pick up the Hasegawa kit tonight, my LHS had it on the shelf, I’ll piece the rest of the markings from other sheets. I have one of his notepad knee contraptions that might make a cool base along with a couple of pocket emergency procedure books that might look sharp all laid out. Winter project ahead.

Glad to help. The knee-board and emergency procedure books sound like a great base. Good luck with it and be sure to post in-progress pics here as well.

I agree with Gino, post pics. The only drawback I recall on the Hasegawa kit is the cargo area has no detail. If you keep the cargo door closed that is not an issue.

I recall seeing someone somewhere on one of the many pages I frequent super detail the interior of that kit. My dad used to have his manuals decades ago but I think he donated them along with his helmet to the Naval Air Museum in Pensacola but I may do some digging around and tackle scratching some interior just for fun. Think I’ll start gathering up parts and pieces and tackle this after the new year. Gino’s image solves that missing touch detail I was after and I’m pretty sure with some digging I’ll get the rest of the markings worked out as they are pretty basic in the big scheme of things. I appreciate your guys help. Haven’t built a helo in like 40 years so this will be fun.

Here is one walk around link.

If you wait til Christmas to start you can join the campaign.

Tank, thanks a bunch, you guys have been a big help. Had a little downtime and Eduard looks to have some nice PE kits and a mask set though Sprue Bros shows out of stock and with their fire it sounds like delays ahead but I’ll keep searching. Also found some nicer landing gears and seats so I’m thinking its time to get out the card and pull this all together. Appreciate the walk around, need to dig through my little library and see what I have hiding out too. The interiors were really bare, ribbing and conduit so might have a swing at it. Only downside on that walkaround-it was too clean. My dad’s crew chief believed in grease, said you could never use too much and he never had a helo seize up and have a failure due to lack of lube or fluids, he always said to my dad “Lt, if you get out of the bird as clean as you climb into it then I was slackin!” Never did a campaign before so I may just do that too!