Influence of factory overhaul/modification on the camouflage?

Hello, I’m asking that for my steel panther with a 8,8cm Schmalturm what if. I readed in a tank encyclopedia article that the turret ring needed to be enlarged, what influence would this have on the color scheme? Would it get repainted or not? What about the weathering? Already planing on doing some damage on the hull.

Normally, whenever a vehicle is sent back to the factory for a rebuild/modification, the vehicle would be repainted. But you are looking at Germany, at the end of the war; paint was in very short supply (like everything else), so the new turret, in it wasn’t already painted, and the parts of the hull that were worked on, might get a coat of primer. If the Schmalturm was already painted, it would most likely be left as is. And the 8,8cm gun would be left as is.
Ken

Do we have evidence that German vehicles left the factory without being painted? The Waffenamt inspectors were still rejecting a significant proportion of armour plate for not meeting the required standard even late in the war, when you’d think that anything would be better than nothing. If the orders specified something, it was generally done, regardless of how strange it might seem to us.

If a factory had time to cut a new hole in the hull roof, fit a new turret ring, new turret, new ammunition stowage etc., the extra time to paint it in accordance with the orders is trivial by comparison. And if it weren’t painted, it probably wouldn’t be accepted, so wouldn’t leave the factory.

There are quite a few pictures of late war builds which clearly show that they were painted in accordance with the prevailing orders.

Simply look at some photos of Sturm Tigers to judge whether or not factory refurbished German AFVs were repainted. Every photo you’ll find that’s clear enough to actually see the camouflage well will show carefully repainted and factory camouflaged examples.

The same can be said for the Gruppe Fehrmann Tigers. In fact, those Fehrmann Tigers are probably the best examples of all. All sorts of seemingly mismatched parts (hulls, turrets, roadwheels, etc.), but they all appear to me, when looking at actual photos, to have been repainted. Zimm’ed and un-Zimm’ed parts might suggest differently because of their tonal differences, but I believe they were all repainted.

However, since a “what-if” build is just that, there’s no reason why you shouldn’t finish it in any aesthetic choices that you find pleasing.

At the end of the war, many German tanks were being sent out with just primer, or primer and maybe dark yellow; with instructions to add yellow and green camo paint. The primer was used as the red brown. I do not consider a tank with just a primer coat to be painted. I did not mean to imply that tanks left the factory in bare metal. The Russians maybe, but AFAIK not the Germans.
Ken

I guess I’ll have to make the hull roof in red primer and keep the side somewhat the same. The schmalturm will be in light sand with a grey gun (it’s going to be a good exeperiment for me)

At the end of the war, many German tanks were being sent out with just primer,

Do you have any proof for that, or just the models you have seen?

I have read that in some articles, but I don’t remember where. If anyone has any color photos, not “colorized” or any other solid proof, I would love to see it. Books and articles can be wrong, but for now that is all I am aware of, so I go with it.
Ken

there https://www.track-link.com/forums/site_blogs/39150/flat if it’s what you’re after.

There is no documentary or photographic evidence that any German tank ever left the factory with any primer showing, either in whole or as part of a camouflage pattern. This is a long standing myth in modeler’s rumor control that has been repeated and taken on a life of it’s own, but is absolutely not true. The trend in modeling was started as artistic license by the Spanish school. We all know the German’s reputation for extremely strict standards and adherence to specifications and tolerances to the extreme, before, then, and now. They never broke with those standards right to the last shot of the war.

This is a long standing myth in modeler’s rumor control that has been repeated and taken on a life of it’s own, but is absolutely not true.

I believe that this “modeler’s myth” got its start as a misinterpretation of the original German text of the order for factories to start camouflage painting of AFV’s before delivery. The original text instructed the factories to only apply the three camouflage colors over the primer only on the intended areas for each color. That is, only paint the dark yellow over areas to be dark yellow with the same for the green and brown.

The misinterpretation came in the way this intention was written. The original German text discussed applying the camouflage color so that the primer was not completely covered and some of it remained exposed. What was not grasped was that the exposed primer was then to be covered by one of the other camouflage colors. The final result was intended to be a completely camouflage painted AFV with the entire vehicle over-painted by at least one of the three cammo colors.

Some researchers and modelers took this to mean that the instruction was to permanently leave areas of primer exposed to serve as some portion of the camouflage or that the factories could do this as an option (with the modeler’s assumption that, say, in the absence of brown camouflage paint, the factory could just leave the primer red exposed as a camouflage substitute). This was an incorrect interpretation (vs. translation) of the original German.

(There is a difference between “translation” and “interpretation” when it comes to conveying the true sense and meaning of something said or written in one language into another language. A literal translation does not always convey the actual meaning.)

The original instruction went on to specify that there should be as little over-lap of camo colors as possible (to conserve paint), but that if some small areas were not covered, those minor places with exposed primer were not grounds for the inspectors to reject the AFV and demand that it be re-painted.

Once the original German text of the instruction became widely available, the misinterpretation was recognized for what it was. However, the historical damage was already done.

Because this incorrect meaning has been published and repeated over and over, it has now become a “modeler’s myth.” Later and newer works on the subject have since corrected this misinterpretation, but the myth still lingers on…

Myths are harder to kill than vampires …

can I still do project like the E-50 with red primer? Already did the brown/gren scheme observed on some late war panther on a dragon tiger H2 (verry nice kit by the way) and for the primer, I did that using a VK 4502(p) hintern that I represented as a museum tank with a damaged gun and some missing suspension.

Dates are Inspektorate 2 order dates.
February 18, 1943 – Dunkelgelb RAL 7028 basecoat, Olivgrun RAL 6003, Rotbraun RAL 8017.
August 19, 1944 – Dunkelgelb RAL 7028 basecoat, Olivgrun RAL 6003, Rotbraun RAL 8017 in Hinterhalt – Tarnung (the “Ambush” scheme).
September 31, 1944 – Rotoxid primer, “sparingly applied patches” of Dunkelgelb RAL 7028, Olivgrun RAL 6003, Rotbraun RAL 8017.
The September 31st order is where the misinterpretation comes in. It changes procedure from a Dunkelgelb basecoat with Green and Red Brown over spray to all three colors being applied directly on the primer to cover the primer to save Dunkelgelb paint.
To prove the point, let’s talk about another paint here: Rotoxid primer. In order to incorporate it into camouflage patterns, modelers and paint companies have interpreted Rotoxid primer to be the color of US Brown automotive primer. It is not. Rotoxid is distinctly red, with no brown tint to it at all.
Here is 80 year old Rotoxid primer: 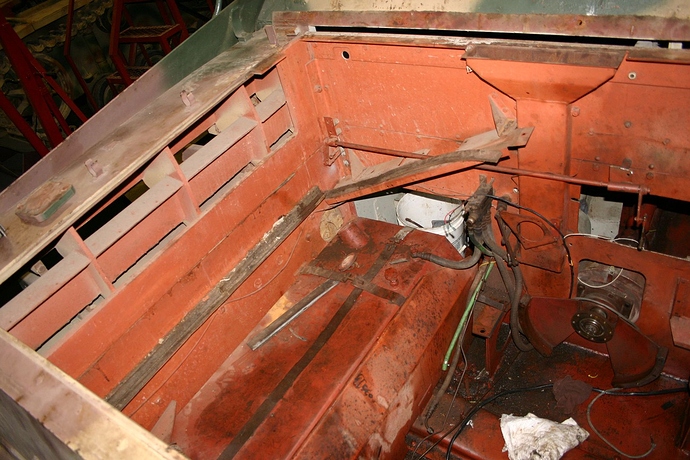 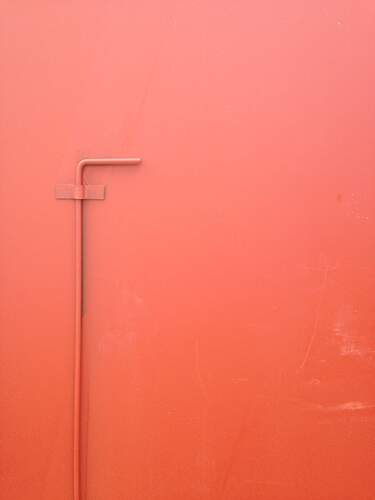 redoxide42448×3264 242 KB
This paint would certainly not have served to replace Red Brown in the German 3 tone camouflage pattern. It is also decidedly red, not brown. Hopefully this continues to bring more clarity to the subject.
Biggles50 May 6, 2021, 3:35pm #15

Late in 1944 (Dec?) orders were issued for the manufacturers of armor components to paint the parts green before final assembly. This order didn’t go into practice until current stocks of Dunkelgelb were used up. Is there any evidence of green-painted tanks having a Rotoxid primer coat, or was the primer actually colored green (primer paints can be colored)?

Right … so these 50 cans of Primer red I have ordered …

There is a series of original color photos taken by the USAAF immediately after the war of one of the Panther / Jagdpanther assembly firms. In this series of photos, there are rows and stacks of hulls that appear to have been initially painted in primer red (turret rings and other areas still red) while the main areas are in either a light gray primer or (photo faded) dark yellow.

The turret shells off to the sides in several photos appear to be rusty red primer.

There are a couple of the photos that SUGGEST perhaps a few green painted road wheels.

These photos are quite easy to find online. Just do a Google search for “Panther Tank factory photos.”

There is a long section in MacDougall and Block’s book, “Panther: External Appearance & Design Changes,” that describes how the tanks were assembled and made ready automotively. They were then test driven. If there were no faults that required correction, the tanks were then cleaned up and given their overall factory colors.

The latest and most current research information is out there and available.

As far as primer was concerned, Daimler was the sole exception. They did not use Rotoxid, they used Zinc Oxide. It was light grey in color.

Well, this has been very informative, and helpful! Thanks for all the input, and especially the photo guidance.
Ken