I don’t build a lot of airplanes, but I came across this unusual bird several years ago and thought I’d give it a go. 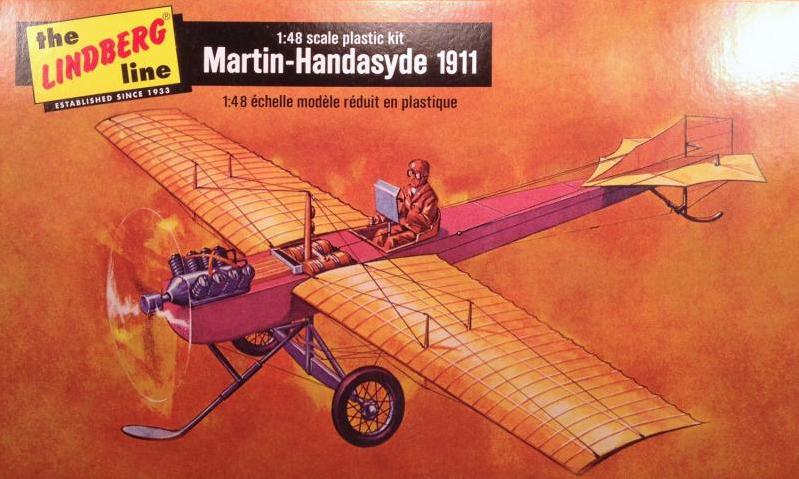 According to Wikipedia, the Martin-Handasyde was an early monoplane with a slender wood-covered triangular section fuselage and tapered wings braced by mid-span vertical kingposts. Lateral control was by wing-warping rather than ailerons, and the undercarriage consisted of wheels on a cross-axle supplemented by a forward-projecting curved “spoon” skid. It was first flown in November 1910; pilot Graham Gilmour was eventually killed in the aircraft when it suffered a mid-air structural failure on 17 February 1912. 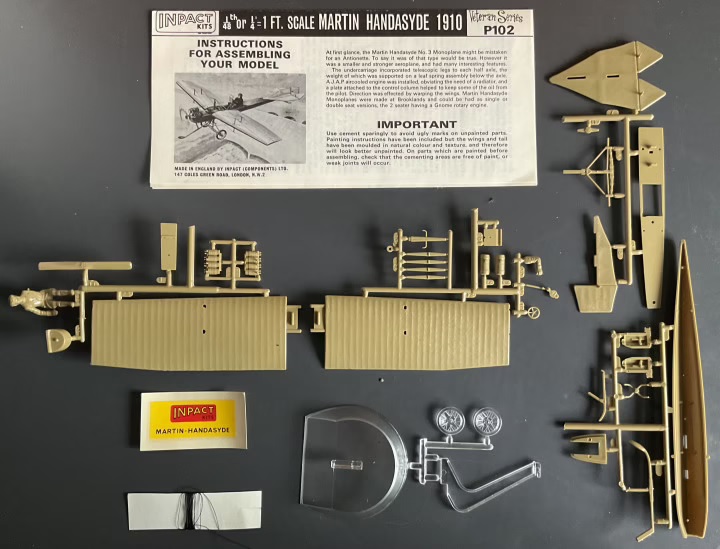 The kit I have is the Lindberg reissue from 2014, but the model was originally released in 1966 by the British company Inpact as part of a series to tie in with the 1965 movie, Those Magnificent Men in Their Flying Machines.

Interesting, this should look very nice.

Had no idea it had been reissued, will have to look around.

Tim, WoW not seen one of these built, pulling up a chair for this.

Interesting, this should look very nice.

Had no idea it had been reissued, will have to look around.

You shouldn’t have any trouble finding a copy; this model isn’t exactly one that flies off the shelves of the local hobby shop… I like this most recent reissue - my daughter was delighted that it actually comes with a little puzzle of the cover artwork! 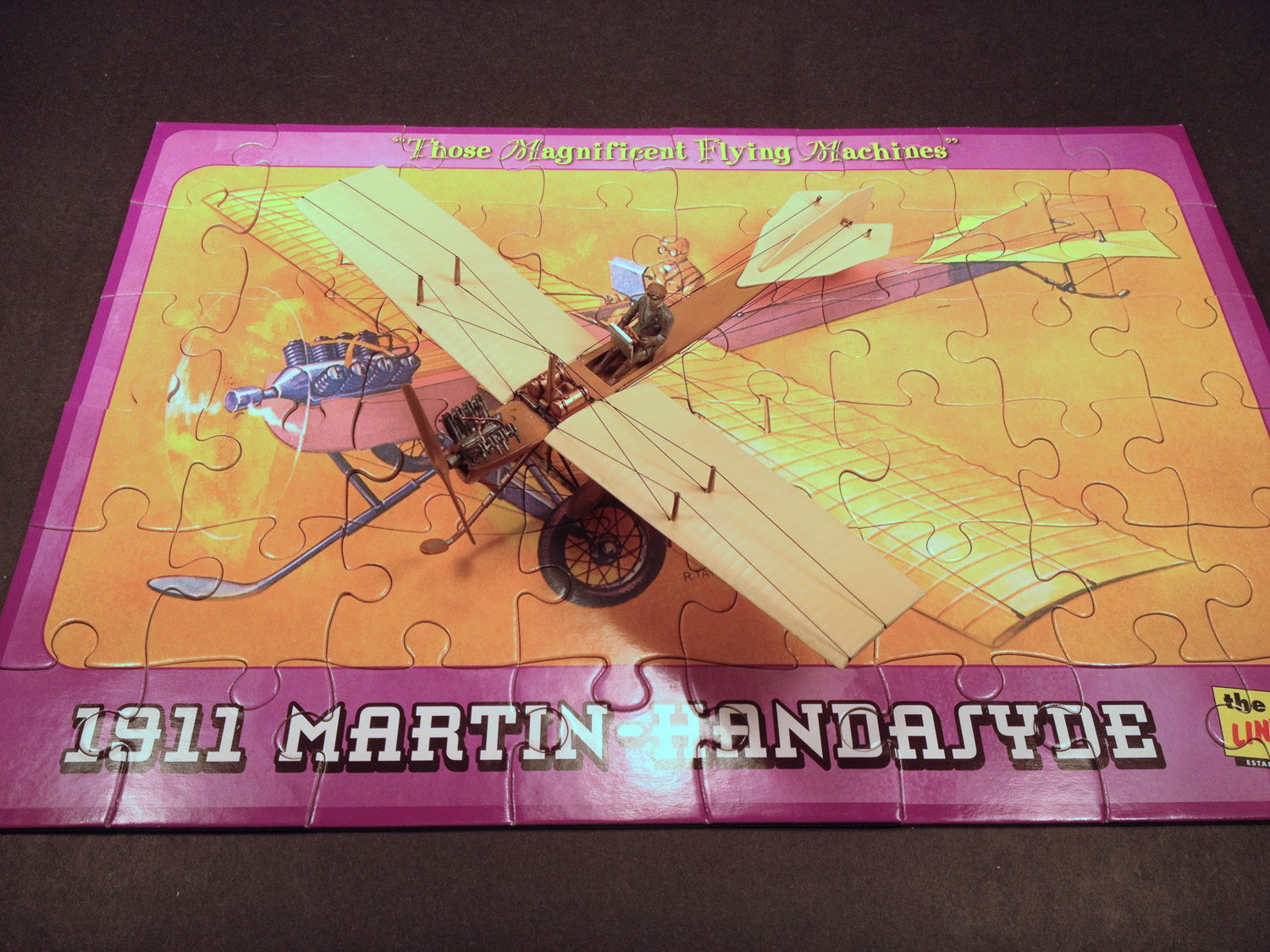 I’ll have to look around.
Sometimes Lindberg kits can be a bit hard to track down on my side of the pond. My LHS got a bunch of their post war jets a few years back, but they seemed a bit rough. I got an X-3 Stiletto and early production Jolly Green helicopter, but nothing since those.
Hopefully I’ll find one. The early aircraft are very interesting.

Something unusual - looks interesting.
It reminds me of some kits from my youth . I don’t recall who made them but they were early aircraft like this - perhaps 1/48th scale . The structure was injection molded plastic but skeletal and were tissue covered like balsa flying models . Anyone have a clue who made them. ? Pyro perhaps ?

I remember there was an article in Finescale Modeller a few years ago about them, but can’t remember the make.
They looked like very nice kits and well detailed.

About the closest we currently have are the photo-etch strip down kits by Eduard.

They were made by Renwall - I think they were called “Aeroskin” kits. Cool idea, but I never tried them.

Yes indeed - you are correct as I just googled them.
Thanks Tim - now I know I wasn’t imagining things,

Tim, WoW not seen one of these built, pulling up a chair for this.

Thanks Luciano. Aircraft builds usually start with the cockpit, but in this case there basically isn’t one, so I started with the figure.

Looking like he would be more at home at the controls of a 1911 motor-car in his high socks, jodhpurs and sport jacket, the unusual pilot looks quite the dashing turn of the century Englishman. 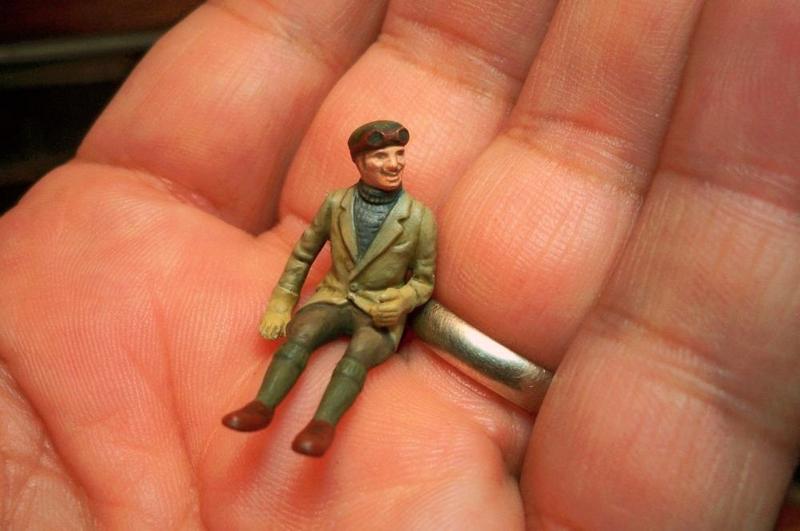 The figure is actually quite well executed with sharp detail and even a separately molded arm to grasp the control column/steering wheel. The only change I made before painting him up was to turn the head to the left.

One striking looking gentlemen you have there Tim.

Luciano and Stephen, thanks! 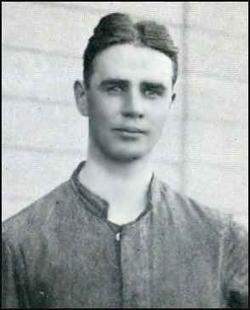 The figure doesn’t look much like D.G. Gilmour, but I suppose it is really just generic. Still, not a bad effort by Inpact for 1966!

Initial assembly of the aircraft was a simple matter of adding the cockpit floor to the one-piece triangular lower fuselage and then attaching the upper deck. The seat sits on top. 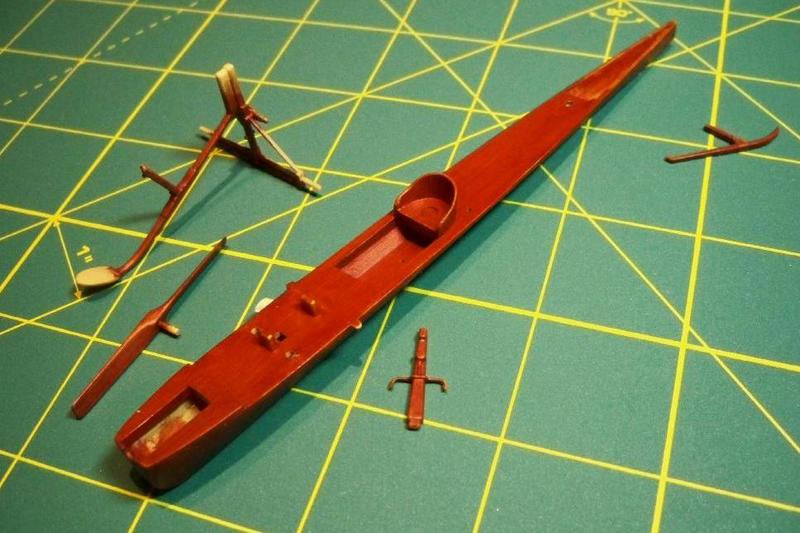 I love the bright purple fuselage on the Lindberg box art, but I’m pretty sure it isn’t accurate! Instead, the fuselage and other wood components were given a coat of Tamiya Buff XF-57 acrylic followed by Windsor & Newton 074 Burnt Sienna artist’s oil streaking to give the parts a nice “wooden” look.

The tail and wings were equally straightforward. Following assembly of the tail and inserting the vertical kingposts into the one-piece wings, I gave the assemblies a base coat of Model Master RAF Middle Stone enamel. 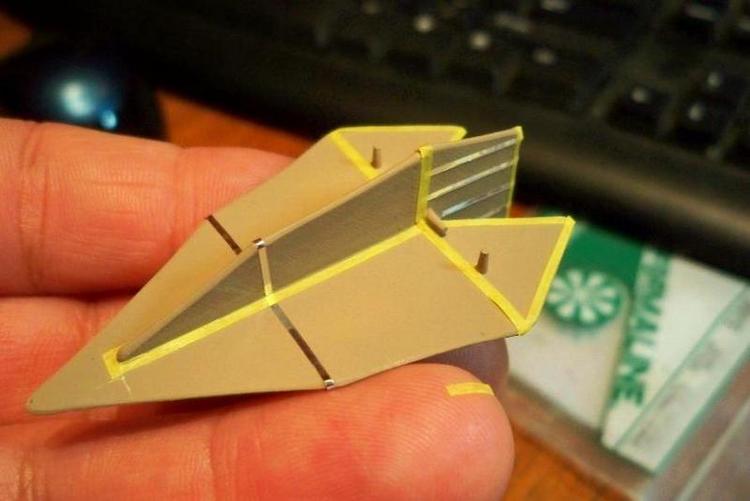 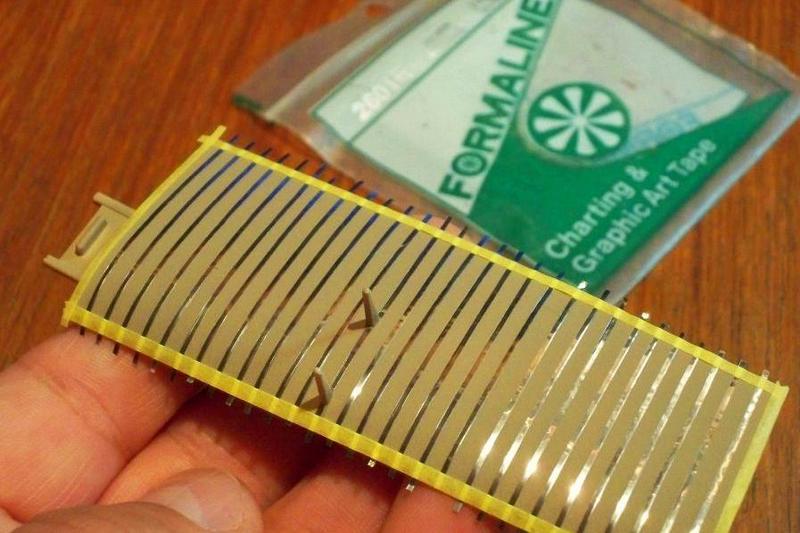 After taping off the internal structures under the skin, I then oversprayed the parts with a Model Master Middle Stone/Flat White mix for an off-white linen color. 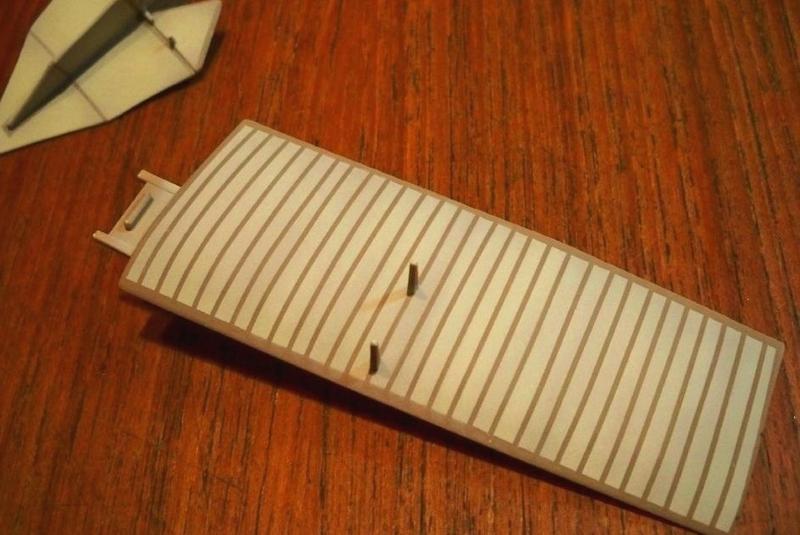 The results were tidy enough, but the contrast seemed too stark. I wanted to suggest an inner wood structure just visible through the linen skin… 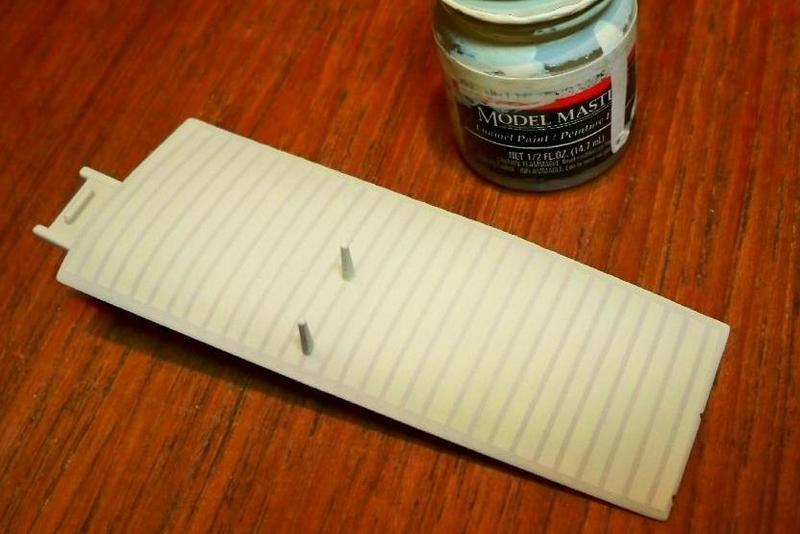 …so I went back and misted over everything again with a still lighter “linen” mix. Better. 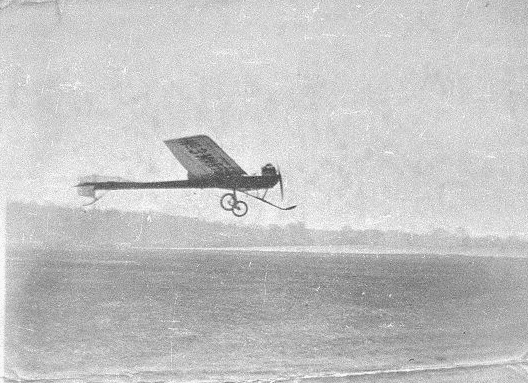 Unusually for aircraft of this era, the Martin-Handasyde had some prominent markings. 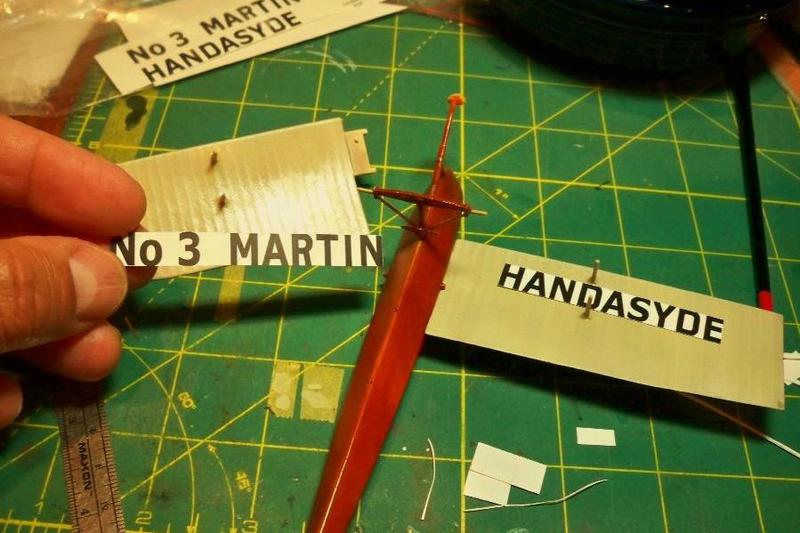 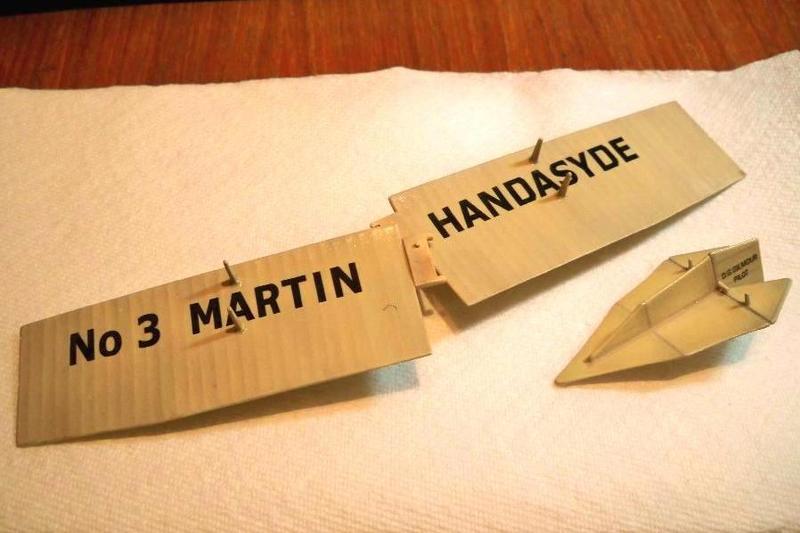 The kit didn’t include them, but fortunately a generous fellow modeler was able to help me out with some beautiful custom printed decals. Thanks again Paul Bradley!

Nice catch Tim with those markings and I’m liking the work on the wings and tail.

Nice catch Tim with those markings and I’m liking the work on the wings and tail.

Thanks Luciano. The markings really do set off the wings… too bad they will be so hard to see on the underside! Now with the wings mostly done it is on to the engine. I don’t know a thing about 1911 engines, but it should be interesting…

After assembling the engine, I’ve done a first mockup of the basic parts. 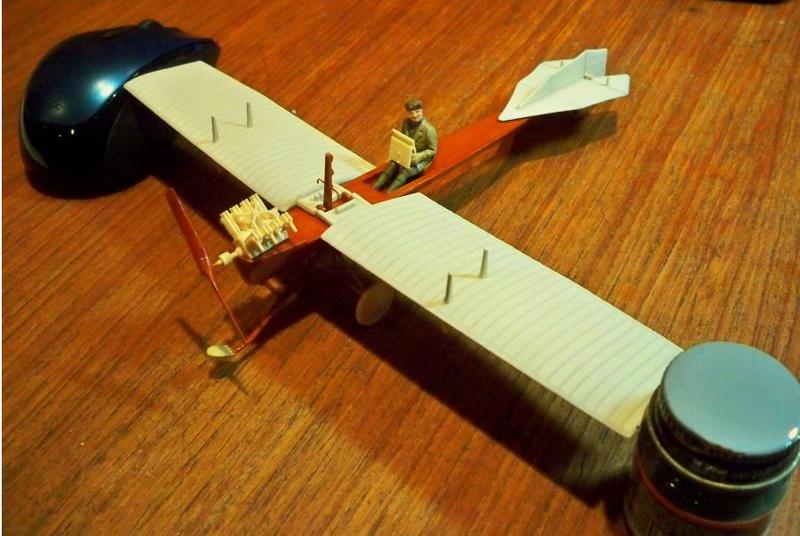 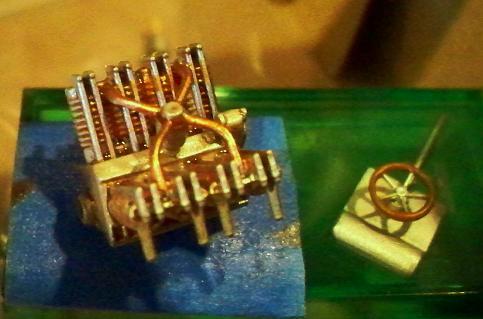 The control column was also shot with the same stainless steel color with the wheel being picked out in Model Master Military Brown. The sheet metal panel attached to the front of the wheel was a field adaptation to shield the pilot from oil spewed from that primitive engine up front.