Adie Roberts continues his inspirations to help inspire modelers of all abilities to work out of their comfort zone building dioramas or just trying new builds. This time it is a 1:48 US Navy SH-3H Sea King helicopter by Norbert Scholte.

Adie Roberts continues his inspirations to help inspire modellers of all abilities to work out of their comfort zone building dioramas or just trying...

It is very worthwhile to see the other photos. The detailing is extremely good. Looking at the stairs weathering, one could swear it is from a real machine.

An another incredible built and weathering !!!

Amazing detail! But you are missing one very important detail in the markings. I was a squadron member of HS-9 during the period we were stationed aboard USS Theodore Roosevelt (CVN-71) (Desert Shield/Storm), and flew in and worked on Jaguar 614, so I am very familiar with the aircraft. With the exception of the ship name and Air Wing number, the markings shown on this beautiful model, including the mine kills/POW captures, Battle “E” and Golden Wrench award marks, remained on our aircraft through our transition to USS Saratoga (CV-60), all the way until the squadron disestablishment in April 1993. The subdued white “Sea Griffin” symbol, which was painted on ALL our aircraft, is missing from the front of the Anti-Ice/FOD shield above the cockpit. I have provided photos of this detail on a close-up photo I took of Jaguar 614 lifting off and it can also be seen on the photo of Jaguar 610, behind myself (Right, in green), preparing to launch. It would be a shame to have all this amazing detail and be missing that one very important one, our squadron symbol. Hope this helps.
Chris “Sonic” Cline
USN
Gulf War Veteran 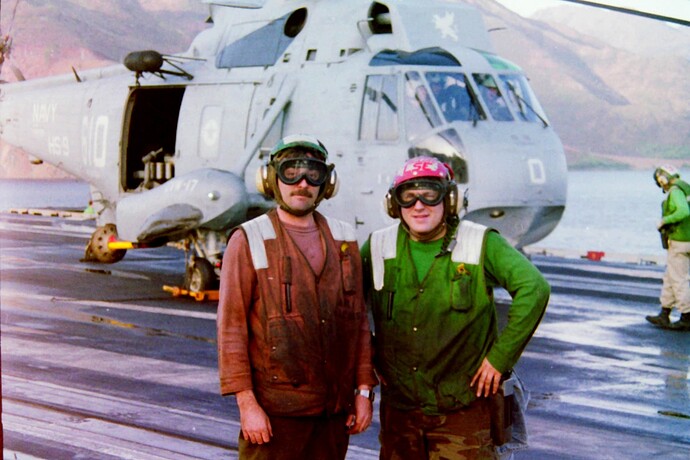 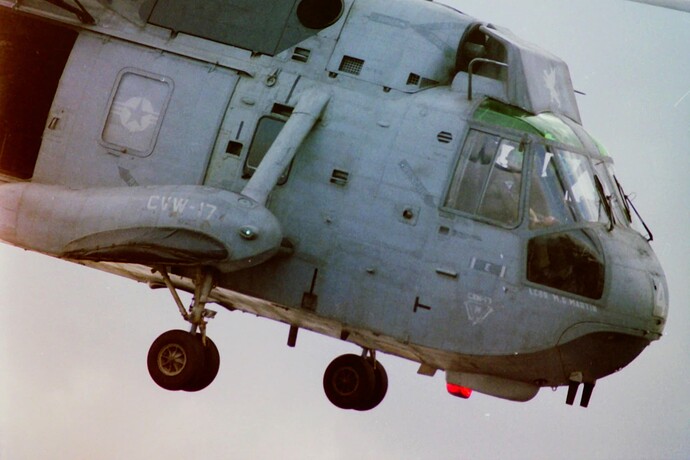 I noticed that about the stairs too! The scratching on the non-skid. Amazing detail! I have seen that MANY times climbing into the Sea King!

when I see work like this it makes me think I have a long way to go before I get that good.