One of the several WIPs I have is going to be an air defense interceptor. I’m planning on adding a searchlight for target ID, like the F-16ADF and CF-118s (Swiss F-18s too, I think. ) On these the light was mounted on the port side. Now, question I have is … intercept doctrine, as I understand it, is the interceptor approaches from the rear, along the port side of the unidentified aircraft so as to be on the pilot’s side (of a multi seat aircraft) for contact. (Wingman of interceptor remains to the rear of the target.) What good is a search light on the side of the interceptor OPPOSITE of the target aircraft. Shouldn’t it be on the starboard side to lght the target up for ID?

No idea, but my guess is the wingman lights up the target for ID by the flight lead? I imagine a plane is easier to identify with a rear quarter/side view than a straight on rear view

As Mead says, the wingman probably lights up the tail for easy reading by the lead, so a left-wing light serves the left-side approach.

It wing is lighting up the target from behind then what good is a light on the port side? AND according to the NORAD manual the one doing the IDing is Lead , on the target’s port side. Intercept Procedures (cfinotebook.net)

Blue line is port mounted searchlight. Doesnt look like it does much good.

Hmm, front your first post I had thought the light was mounted port side but facing forward. That’s why I suggested the wingman lit up the target for the flight lead to identify.

If the light truly points directly to port, then I’m not sure

Me too but nope 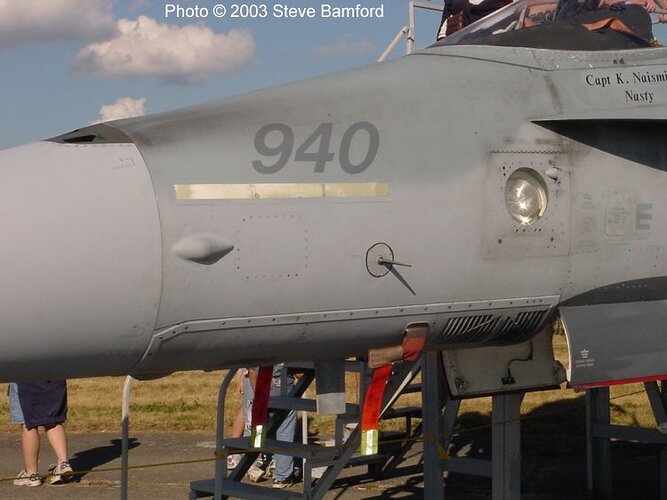 The thing apparently shines out the port side ammo loading hatch.

Weird! I have no idea then.

Could the light be used by the wingman to illuminate the leaders tailfin to inform the intercepted pilot about who he/she is being intercepted by?
Like a police officer showing his/her badge before saying: You are under arrest.

Unfortunately my grandpa passed away a few months ago. He was a radar operator at North Bay and was tasked with getting interceptors on target during the Cold War, he might have known the purpose of the lights.