Japanese tanker uniforms of the 1960s-70s

As the title says, I’m looking for pictures of Japanese tanker uniforms from the 60s- 70s. Can’t seem to find anything on the net, and also any figures in 1/35 scale which I don’t think exist, I probably have to convert some other figures. Thank you in advance for any help. 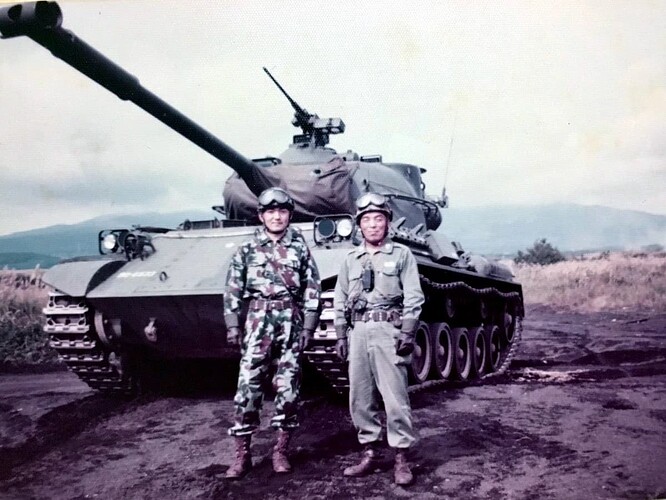 FineMolds did a figure set: 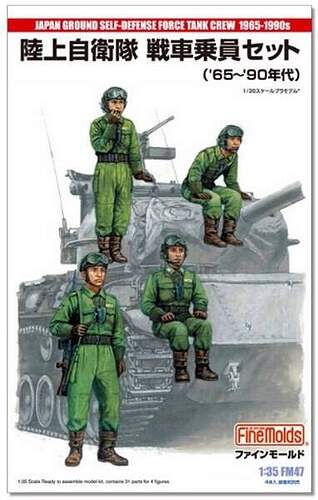 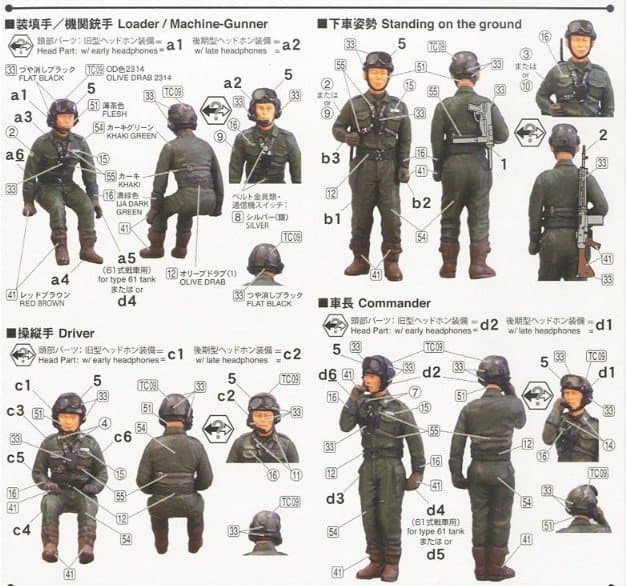 Excellent! Thank you Peter that’s exactly what I was looking for. I tried researching type 61 but didn’t get very far. Kept coming up with tank pictures. I guess I didn’t look hard enough. And had no idea fine molds made a set- now I don’t have to convert figures. Awesome thanks again!

My Skybow M41A3 (13th Tank Battalion) kit came with a JGSDF tanker … I think … I know most of Fine Molds JGSDF kits have figures. Also Trumpeter’s JGSDF kits have some figures too. I used some of the infantry weapons in my FM Type 73 light truck. (51st Inf. Batt., 15th Brigade. Naha, Okinawa.) 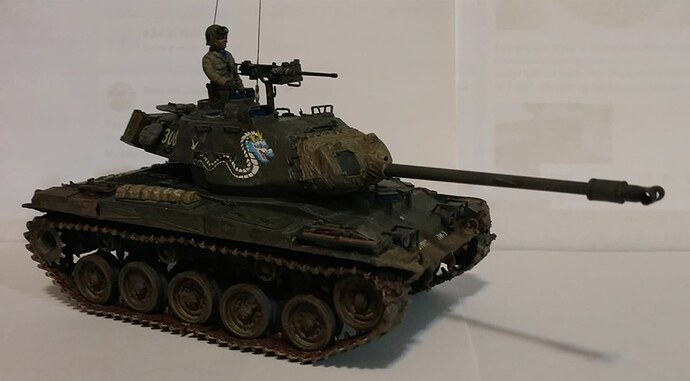 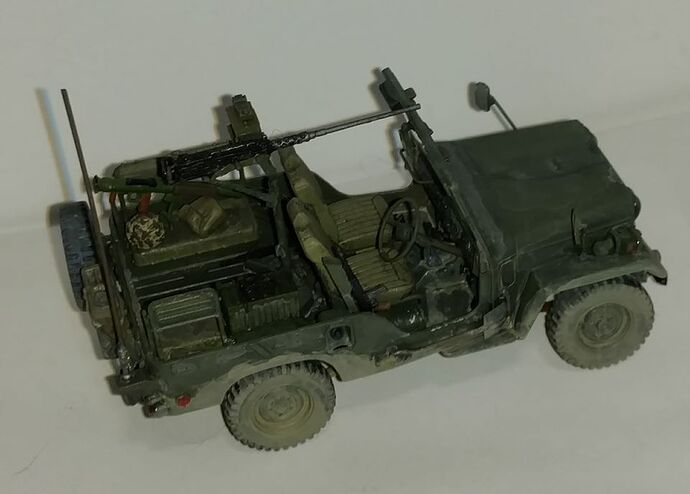 It’s not the Skybow M41, it’s the AFV Club kit (which I know is Skybow’s, but the JGSDF version was marketed by AFV Club).

Model Art also did a crew in 1960s era uniforms: And of course you always have the figures from the Tamiya Type 61 and Type 74 kits. Not the greatest given their age, but some careful painting can yield acceptable results.

Thanks for your help guys. What got me started on this Japanese tank kick was I went to the Long Island figure show last Saturday and one of my friends brought a Tamiya Type 61. He used some after market stuff on it and it looked excellent. But he recommended the Fine molds kit. So I bought one from plaza Japan site and got it in 6 days for about $53. Pretty damn good ! So I just had to have a crew for it as is my norm most of the time when it comes to armor.

Anyone know if the model kasten tracks are an improvement over the kit tracks? The kit tracks are link and length and do look ok. I’m wondering though…

Model Kasten tracks are ALWAYS an improvement over any kit tracks, at least in my opinion. Personally, I still like them much better then Fruil Model or any of the white metal offerings (although Masterclub are pretty good!).

The MK Type 61 tracks are meant for the Tamiya kit, so not sure how they will fit on the FM sprockets though.

Thanks Jon. I was curious if anyone has used them for this tank. The kit tracks look pretty nice though. I’ll probably get the MK ones anyway.

I built it. Box said SKYBOW … Decals were After Market . (Asuka).

Fine Molds kits are better (way newer molds)than the Tamiya kits. Tamiya uses some FM kits intheir combo kits … Type 90 and Type 73 “Jeep-san”…
One heads up, Asuka markets a Type 74G (Type 74 upgraded gunnery as a supplement for the Type 90. Only a few were built for evaluation. ) . It is the same old Tamiya kit with about a dozen upgrade parts from Asuka.

Have a bunch more in various stages. IJA and JGSDF … most FM kits. Word of advice, if going for WW2 IJA stuff invest in Hataka’s IJA paint set. (JGSDF stuff I use Tamiya JGSDF OD, Green and brown) 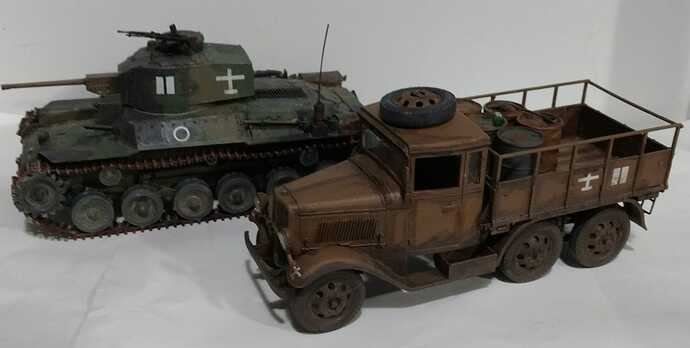 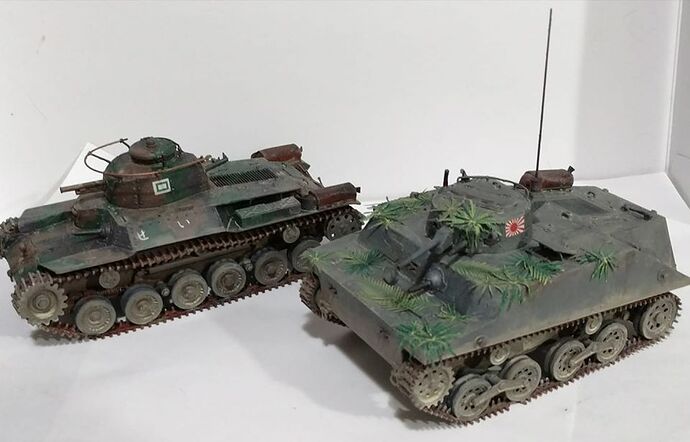 Great looking models there! I have a bunch of ww2 Japanese stuff and a few modern pieces. I’ll probably stick to my Tamiya paints for now, but I’m in the process of trying the AK Real Colors line.

Sorry, I misinterpreted what you said and got the impression you used the AFV Club JGSDF version of the Skybow kit since you mentioned a figure. The Skybow kit definitely does not come with a figure, let alone a JGSDF figure ( I do have the kit as well as the JGSDF version) so you must have sourced the figure from elsewhere like the decals.

In case you are unaware, Hobby Japan is releasing a brand new Type 74. It looks very good, and if their FH-70 howitzer is an indication, it should be.

Might be. Built the M41A3 years ago. Could well be a Tamiya figure. Memory aint what it used to be.