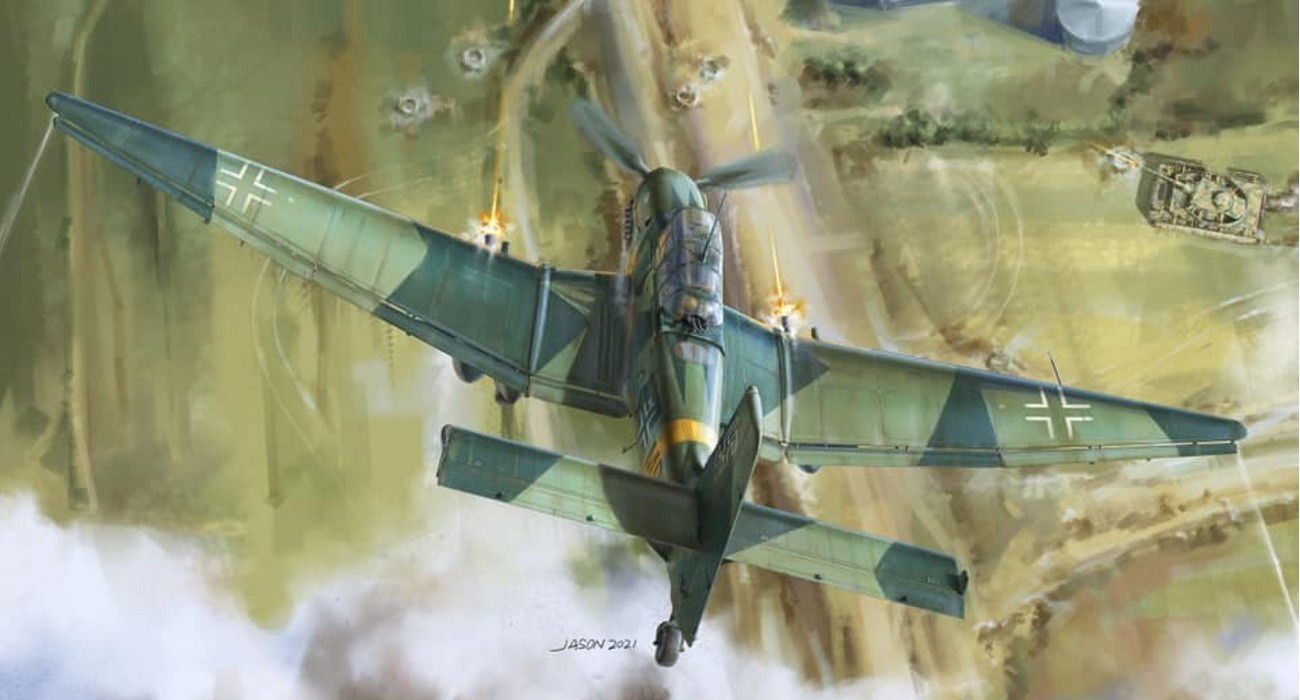 Yes there is. Bronco, ICM and Border all make aircraft kits in 1/35th and several others do Helicopters in 1/35th too. By all accounts, they are very popular.

I am looking forward to this kit coming out.

I can see a market for someone that wants to do an airfield scene. Plenty of 1/35 vehicles and figures that would look great with a Stuka

Crashed or captured aircraft on the trailer of a tank transporter, SAS Jeep zipping by shooting up a nearby aircraft, etc, . With the number of 1/35th figures out there, having soldiers inspecting aircraft captured when fields were overrun, or crash landed vehicles, etc has a big appeal. The popularity of the gliders in 1/35th came off the back of having same scale troops to put around them, matched sized vehicles that could be shown being offloaded, etc.

I have always wanted to do a dio of an SOE Lysander just after take off with one wheel skimming over the roof of a German truck arriving too late to stop them. Hornet make 1/35th scale heads with perfect shocked expressions

I don’t see any comparison of /35th scale to 1/40th scale etc. I can only surmarize that folks that fail to understand why aircraft can be in 1/35th scale have 0 interest in military models (ground vehicles). For folks that dabble in both aircraft and armor, this is a great opportunity. Going back in time, I wish the manufactures would have selected a common scale for both aircraft and models near this size (maybe 1/33.5

). But that would have made to much sense. Now if one could select one or the other I would be very happy.

I think there is a market for both 1/48 and 1/35th aircraft. For guys that only build aircraft 1/48 offers and opportunity to save space but still have detailed aircraft. But i ageee 1/35 is fantastic for people that dabble in both

It was an honest question, as I hadn’t heard of armor modelers wanting aircraft in 1/35th. So if there is a viable market for it, great!

Of course, the Ju 87 has a definite connection to the early war Blitzkrieg in its integral role as flying artillery for the ground forces, and with the “G” as a Soviet tank buster later on. But I believe the first (or one of the first) 1/35th scale acft was a Bf 109G-6/R6, a bomber interceptor, which doesn’t seem to have any connection at all with the ground war represented by armor. Hence my original question.

My muse about 1/40th scale was only to say that since you armor folks are now getting aircraft in 1/35th scale, which you have to admit is pretty remarkable, maybe someday my “dream” scale of 1/40th (half-way between 1/48th and 1/32nd) would be realized.

As to the question of interest in military models, I LOVE armor – I started building armor in the late '60s with the old Monogram kits. I currently have 32 military models in my stash (AFV Club, Dragon, Italeri, & Tamiya) awaiting their turn.

I actually think its more about all the supporting accessories in 1/35th scale that is marketed for armor models but can also be used for any aircraft that is spending time on the ground, whether at an airbase or crash landing. It helps tremendously for aircraft diorama ideas that bleed over onto scenes combined with ground vehicles. I build aircraft too and there is alot less available for ground accessories in 1/32 or 1/48th.

I have ordered this kit from Hobby Link Japan. It’s supposed to be released in January. I build primarily 1/35 scale armor. This kit is great for an airfield diorama (which I will never build, but think I will). I have the Tristar Fieseler Storch and Bronco Piper Cub “Rosie the Rocketeer” in 1/35.