Greetings.
Something else to look at, and hopefully enjoy. This is an older diorama, the figure’s faces aren’t as good as my more recent work, but I like it, and I hope you might, as well.

As soon as I saw the excellent Soga Paratroopers set, I had to design a diorama where I could use them. I then found, through some random Google search, a Waco Glider model and things started to come together. The glider is actually an all-paper kit in 1/33rd scale – there’s a whole line of paper printed kits from Poland – who knew? 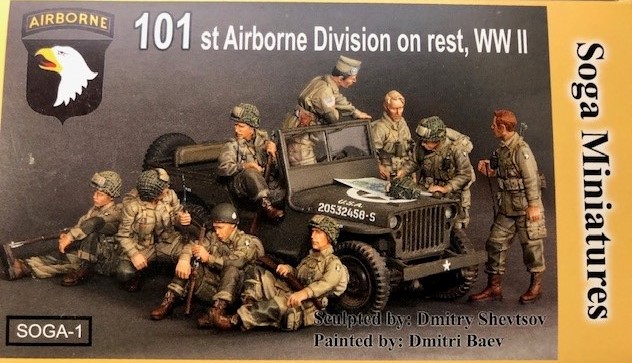 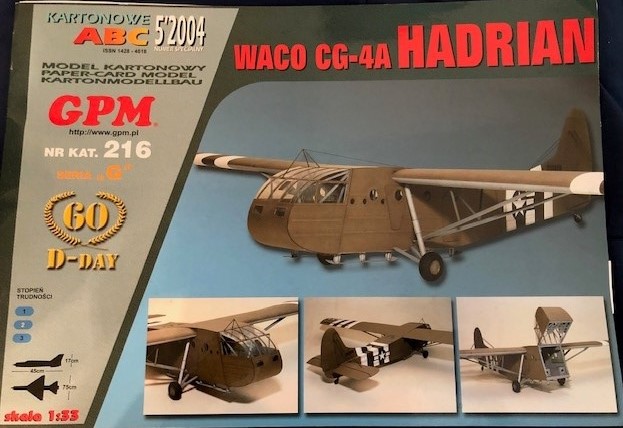 Here is the result: June 7th The Invasion

Throughout June sixth and into the 7th and the 8th, landings continued as parachutes and gliders delivered more troops, supplies and equipment. As soon as they were unloaded, they were sent out to where they were needed most.

In this scene, a couple of heavily loaded jeeps are ready to head out. While a few exhausted troopers wait for word on where to go. Alongside a farmer’s field they find shade and cover under a crashed glider, against a chateau’s wall. 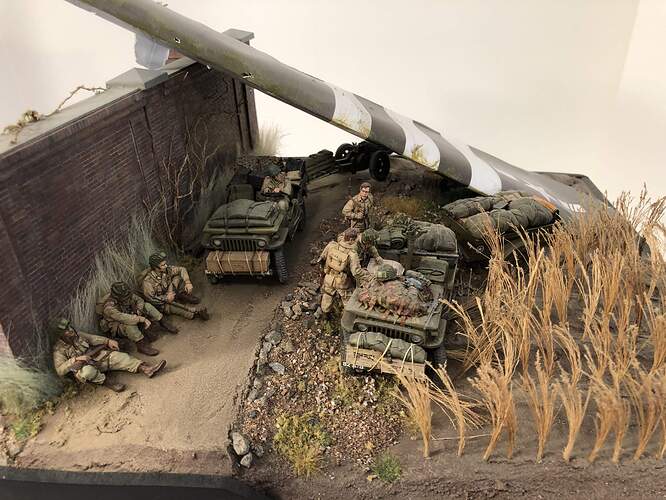 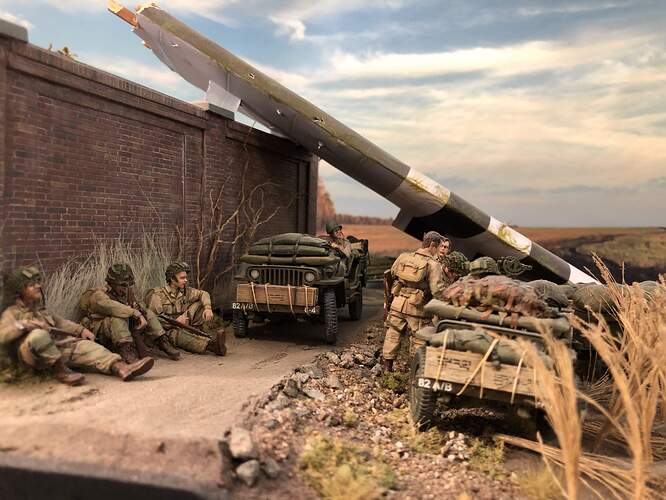 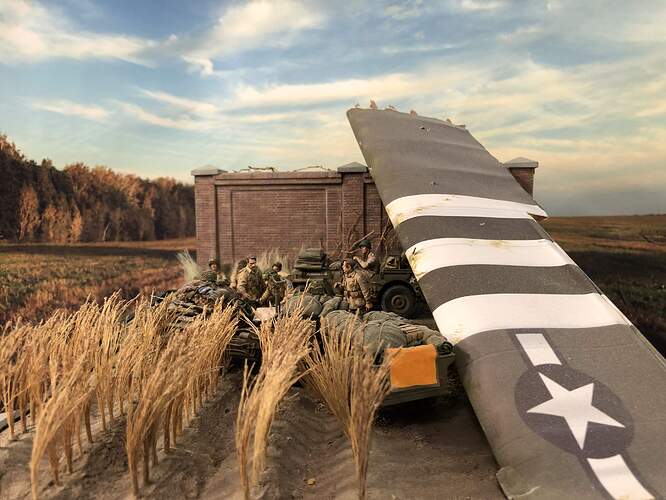 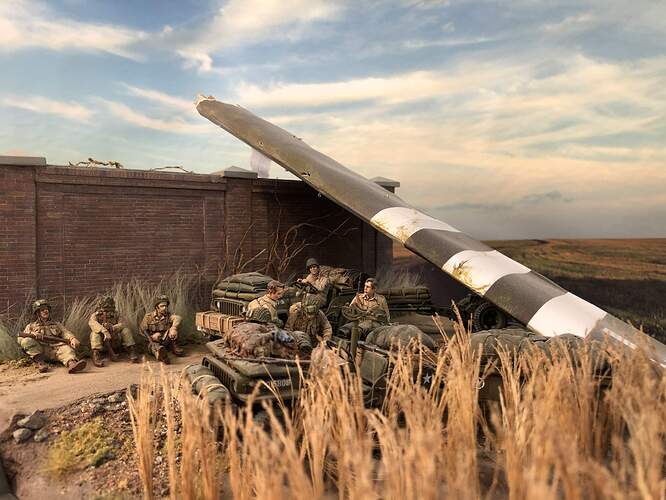 I had originally intended to build out the Waco glider’s entire front end. With the cockpit opened up and a jeep pulling out. I purchased a ton of styrene rods as those gliders’ cockpits were just skins around a tubular frame. But I ran out of ambition, and settled for just using the wing. With it, I made a balsa-wood frame to hold it together and show the wing-root, where it had torn off of the fuselage. (I accepted the fact that it would be a little off-scale. What’s a few centimeters among friends?) 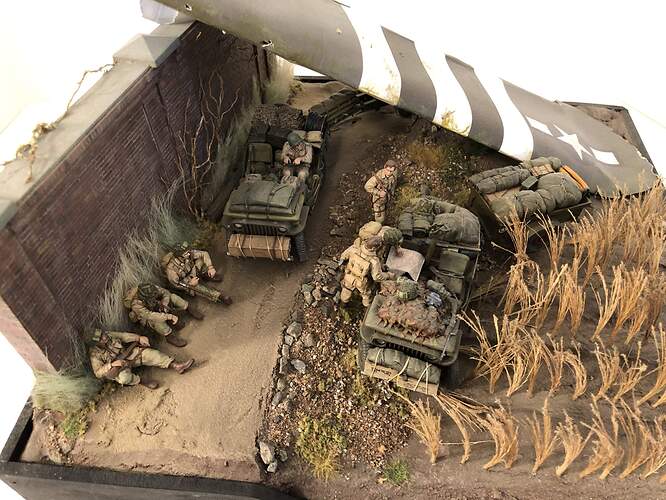 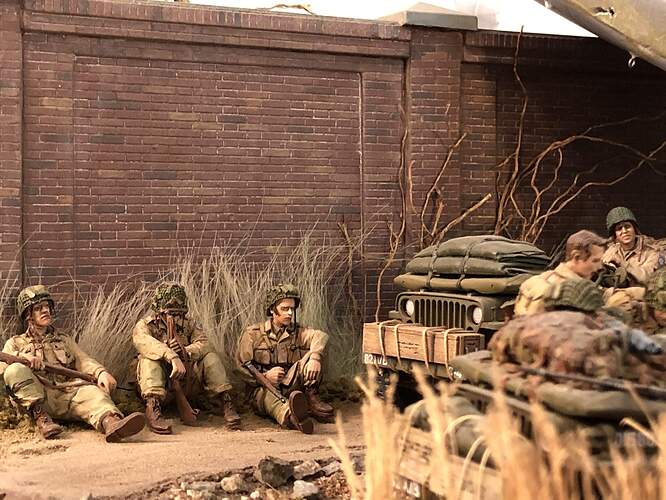 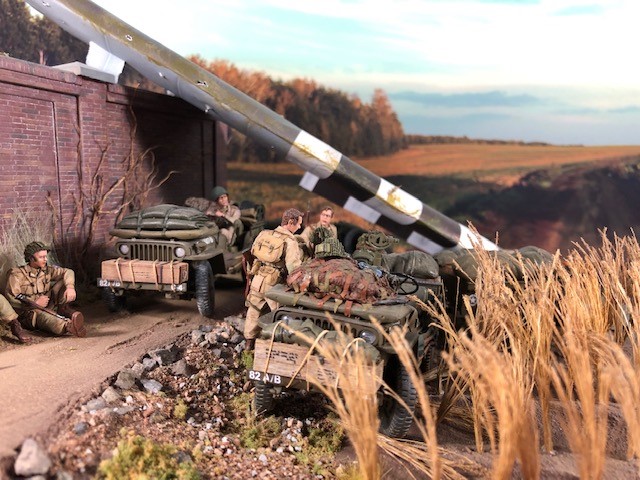 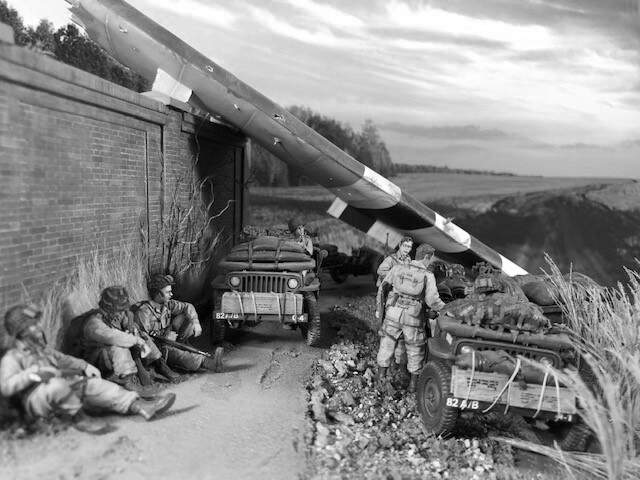 I was only barely able to keep the base with my 30 x30 cm diorama base, size goals…

The jeeps, and the howitzer are from Bronco (very nice kits) and their load-outs are from Value Gear.

The Wall section is from MiniArt, a handy backdrop for any diorama.

As always, the photos were taken with my iPhone, and with a poster backdrop, look pretty good (IMHO).

What do you think?

BTW: If you’re into Airborne Operations, and the US Paratroopers in Normandy in particular, there’s a book by military historian S.L.A. Marshall called ‘Night Drop’, that provides full details of that battle; all based on first-hand accounts. Very good reading…

That is absolutely amazing . It tells a great story

Absolutely beautiful!! So many details… great!!
And the poster back adds so much realism to the diorama, fantastic! Makes it look so real…

you were some modeller when you were younger…

What a fantastic scene you’ve created there Ralph.

Yes, excellent story for sure! True definition of a diorama!

I’m a big fan of Airborne subjects and always wanted to do a diorama with a glider in it. This is fantastic!

Excellent Diorama! And yes, Night Drop is a great read! Wish I knew what happened to my copy. I’m a big fan of US Airborne history as well.

Really like the guys resting against the wall. They have that weary look that says I’m plum tuckered out.

Agreed - If I do say so, myself. Those three came out really well.

@metalhead85 and @Stikpusher, Night Drop is a great book, and if you want to really add to it, find a copy of the Official History - US Army in World War II; European Theatre; Cross-Channel Attack, published in 1951. The official study! It includes dozens of detailed, fold-out maps, and among them are drop zone maps that actually show the locations of every stick of paratroopers dropped on June 6th. Unbelievably fascinating (and depressing too, when you see the sticks dumped into the Atlantic.)

BTW: My father went through Jump School at Benning in 1943, exactly 30 years before I did…
Airborne!

Sounds like a great read. Definitely gotta check it out.
Outstanding job here Ralph. Cool story about your Father. What unit was he in ? Jump school was much different back then obviously; it was more like a parachute infantry course. Wish ours was like the British course….
I went through jump school in April of ‘88.
Again great job on the diorama.

Jump school in 1973 was hard enough for me. I wasn’t in that good a shape - back then (VietNam days), we weren’t all that professional…

My Father wound up in the 511th Abn Infantry, with the 11th Abn in the Pacific. Fought in the Jungles of the Philippines (Purple Heart), Manila and was one of the first American GIs landed in Japan right after the surrender. He wound up an E6.

I am glad that you show us your works, thanks! This diorama is really nice! /Erik

Thanks Eric. I just hope everyone enjoys seeing my work, and perhaps gets some ideas for their own projects. I pray that no one thinks I’m just showing off. Ralph

I for one do not think it is showing off. Im thankful that you choose to share .

Awesome job Ralph, and one to be very proud of for sure. You are not showing off at all, it is an inspirational dio and I for one am grateful you decided to share it with us. I look forward to seeing more of your work on here. Thank you again for sharing and best regards…Dale