I recently saw a Pic. un the Armor site featured here earlier, it was a knocked out T72 -T90 ?
The penetrator went right through the ERA block without detonating it, like a can opener to a tin can.
It looked like the block was a empty box.
an easy way to save some money.
Just wondering if the hull is armor grade or regular mild steel

Any chance of you locating that image again?

I believe there were some instances of corruption during the first Chechen war where the explosives in the blocks were removed and sold to local buyers. I think there may even have been prosecutions for it.

Supposedly the Kontakt 5 ERA is reported to have some reactive effect upon kinetic energy penetration rounds. That is the type seen on the T-80U, T-72B3, and T-90 tanks that looks like large slabs or tiles. The older Kontakt 1 “bricks” have no such properties.

Scroll down to the Kontakt 5 section of this post for some info.

There was world news video of a knocked out T-## tank (I don’t know whose side it was on, probably Russian) outside the highway of Kyiv that had the many frontal ERA blocks blown off, meaning if the HEAT warhead hit one ERA block, it should be one ERA detonated block missing, but this is not the case.

So how many projectiles hit the tank’s frontal glacis? No one really knows what caliber the Russian ERA blocks will be set off, and unlike the West, the Ukrainians have gun calibers above 25mm Bushmanster M2A2. So if the ERA blocks detonate at 30mm or 76mm (BMP-1) shell, then that would expose the hull to RPGs, etc. The ERA was bricks, not ERA slabs like Kontakt-5.

On the link that I posted above, the Kontakt 1 bricks can reportedly have sympathetic detonations on surrounding bricks when one goes off.
Of course, I’ve also come across a photo or two of tanks that have the mounting points, but no ERA mounted.
This war is sure providing a lot of material for variety of stuff like that to be seen.

There’s more information of the sideskirt ERA and other fittings here if you scroll down the post a bit. Lots of info overall.

During the Chechen War, it was reported that many Russian tanks were deployed without the HE filler in their reactive armor. It supposedly wasn’t deemed safe to leave large quantities of plastic explosive sitting around on tanks in storage depots possibly for years at a time–it would be too easy to steal it. Installing it again would have taken weeks, so many tanks just went without it. In the present conflict, the Russians spent months preparing, so presumably there has been ample time to make sure the bricks are functional–then again, it is the Russian Army…

The troops were told they were going on an exercise,
why load the explosive filling if they are only
going on an “exercise” …
Sloppy planning could be one reason,
over zealous secrecy could be another,
incompetence is always an option …

Those who knew thought they were just going to drive to Ukraine
and be welcomed as liberators.
No need for ERA because nobody will be shooting at them

The Javelin now uses a double shape charge with the second one back near the rear. The first charge bust the ERA block and the second one goes till it hits the breech. Not a pretty sight
gary 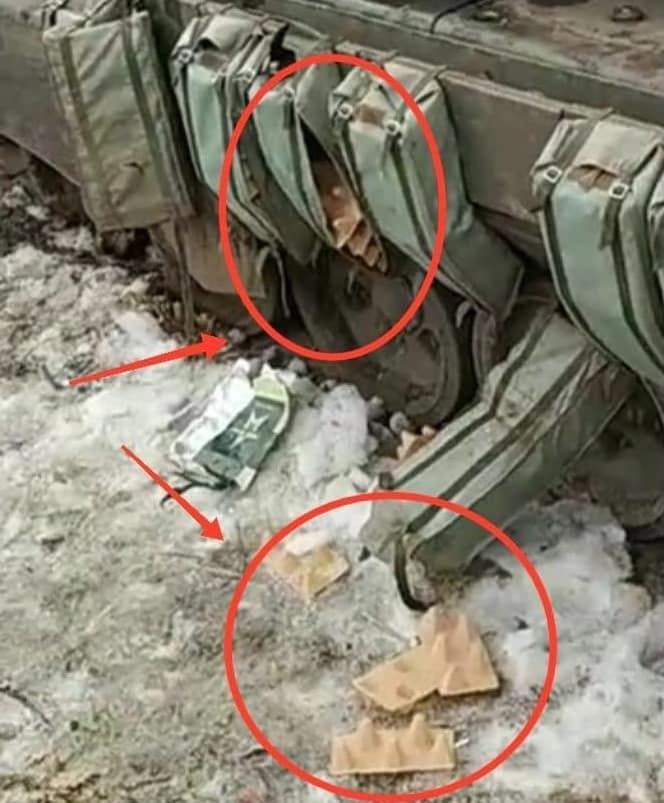 Fake Russian defensive measures to make the troops feel better are widely used and have a long history. Above is a recent photo of ERA bags filled with cardboard. Also empty ERA blocks are the standard, not the exception. Tank crews will sell the explosive for food and vodka. Then again there is the anti-ATGM gill armor on T72’s made of rubber. And finally, in Afghanistan it was discovered that the ballistic armor issued to Soviet troops was filled with nothing more than cotton batting. Now we have the useless overhead cage armor and 6 year out-of-date Russian rations. The Russian war machine is filled with lies.

Nah, this is the revolutionary Potemkin armour.
It has a long history in Russia:

In politics and economics, a Potemkin village is any construction (literal or figurative) whose sole purpose is to provide an external façade to a country that is faring poorly, making people believe that the country is faring better. The term comes from stories of a fake portable village built by Grigory Potemkin, former lover of Empress Catherine II, solely to impress the Empress during her journey to Crimea in 1787. While modern historians agree that accounts of this portable village are ex

I was just going to post that very photo. The Relikt soft armor is supposed to stay intact if the tank should hit an obstacle, rather than be torn off. Of course the protective feature only works when there’s actual explosive inside. I had to laugh when I saw it. It reminded me of when I bought a Royal Enfield a few years ago. The soft bags it came with looked great - until I took out the wadded up paper inside. Remember back in the day when all those missiles used to parade through Red Square? Empty ones with no warheads? Not much has changed.

Edit:
And I have actually seen that North Korean village firsthand. Analysts figured out that they were empty by looking at the light coming through the windows. The lower the window, the less light coming out. Not only do they have no inhabitants, they have no floors between the stories.

In the DDR they used to tell the citizens that the west was doing the same thing. Hard to fake the entire city of West Berlin when you can see it outside your apartment window,

That’s an interesting thought and makes sense as well. I can see the secrecy that’s always a norm for the Russians but also a rude awakening for Russian troops.

That’s some thing with the Soviet/Russian military. The equipment between units are widely different from one to another. They always have top tier gears and equipment, but they are never fully standard even though they have full standardized designation. As if they have those for show than actually means for soldiers.

In the 80s, Soviet has high effectiveness body armour that could withstand rifles, but barely anyone had them and the best most of them had are basically steel plated flak vest.

Their tank cannon are very powerful, but then they cut in the ammunition grade with very few high quality ammunition available.

Their ERA does work very well, if they are there. Otherwise, the are using these thing like NxRA add-on…