Here is where I am at with my Kitty Hawk 1/35 SH-60B build. It is a wonderful kit. It does has some minor flaws, but nothing that will take away from building it. I built the HSL-43 Tiger Cats bird. There are some discrepancies between the model kit and the real bird, but nothing to cry to mom about. here is what I found so far: 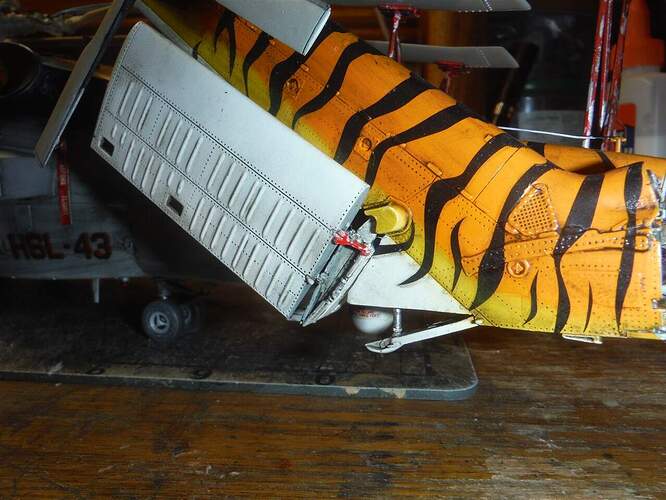 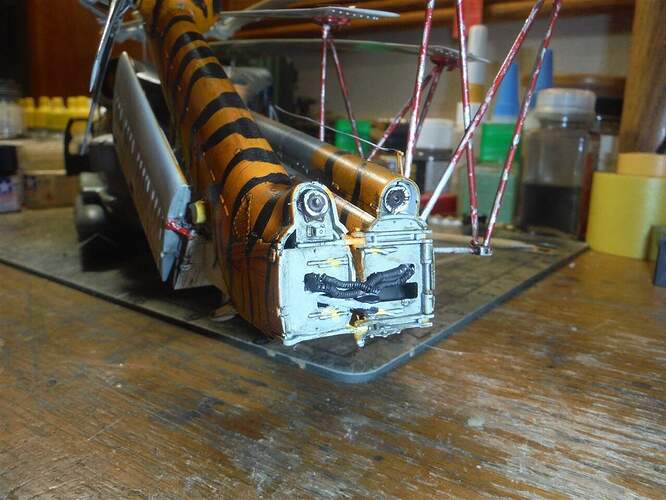 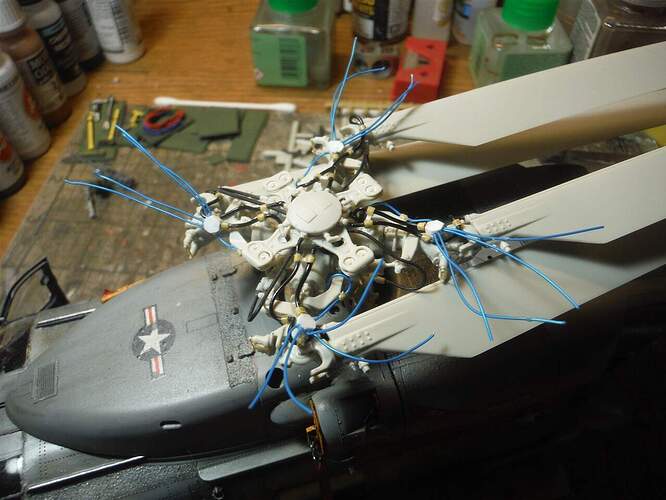 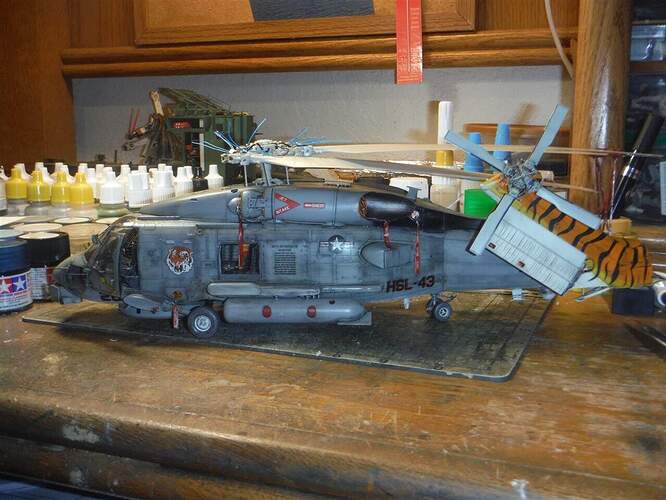 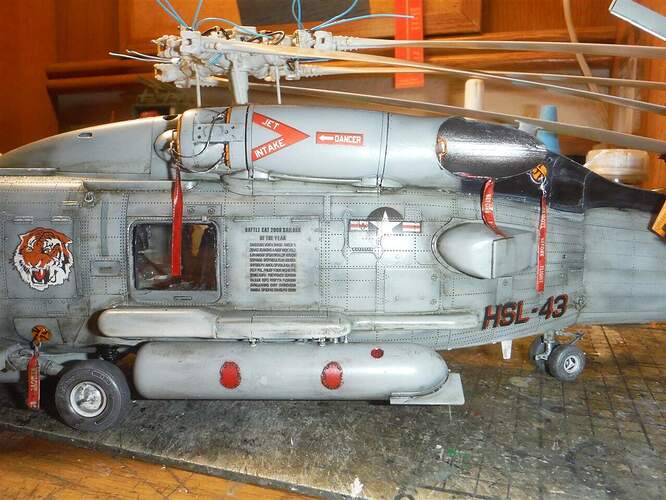 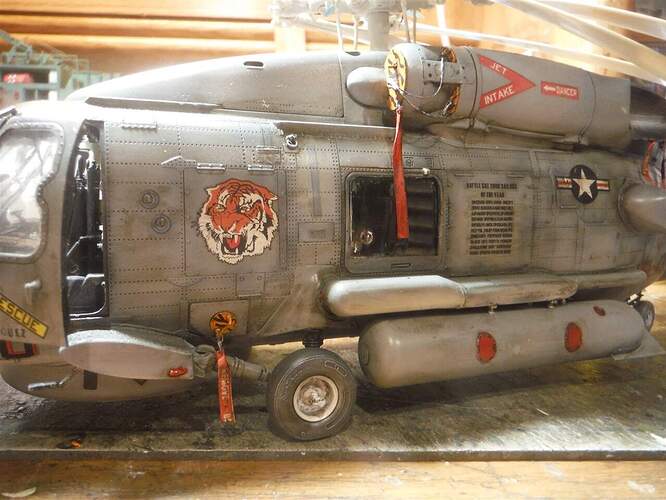 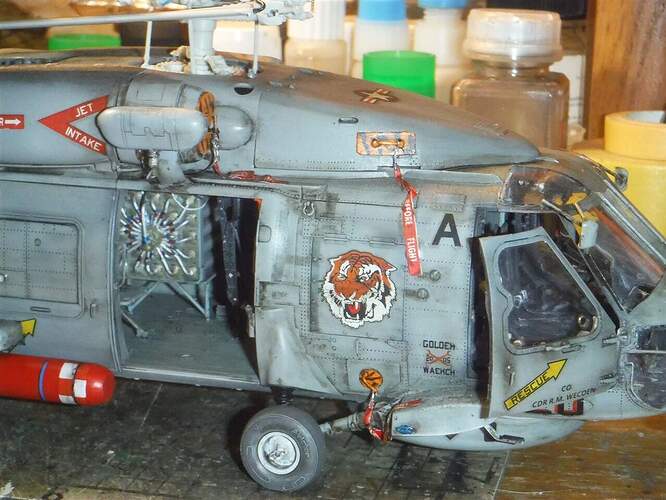 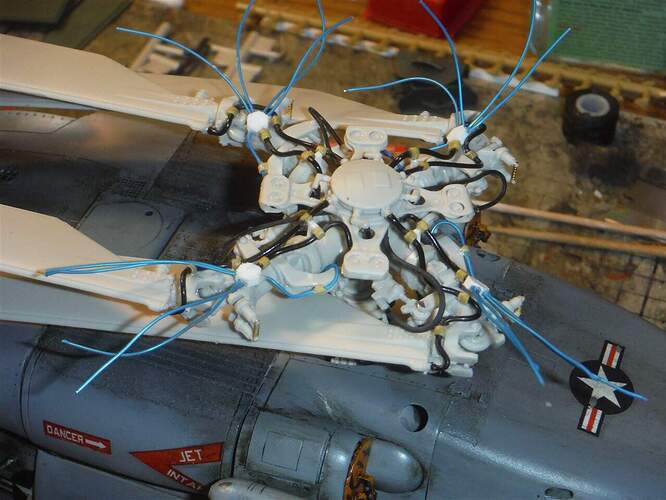 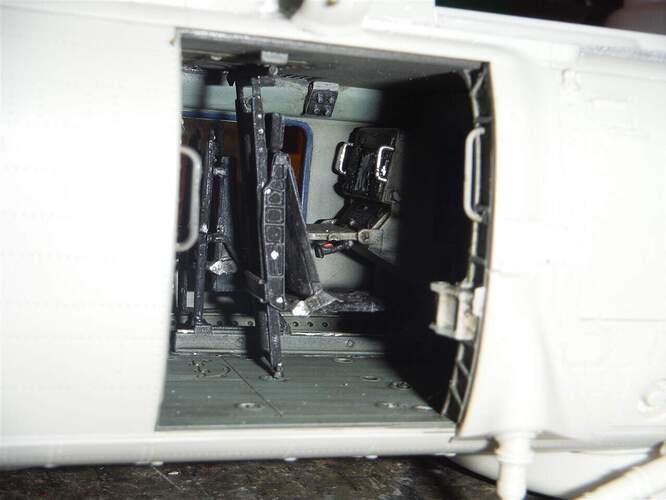 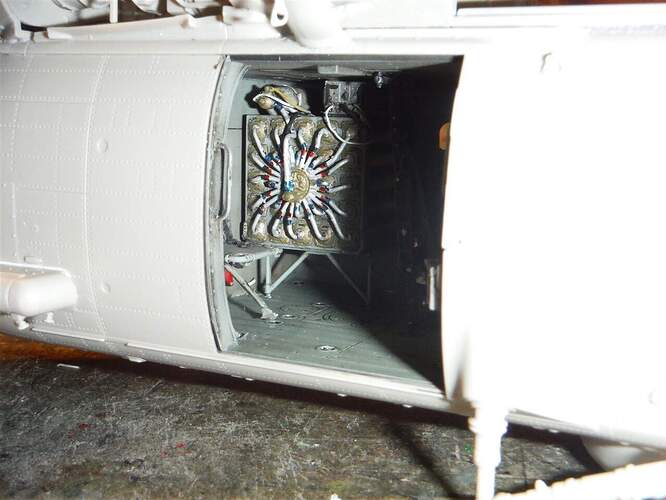 Looking great, Pete. Looks like you overcame the issues.

Are the rotor wires provided?

No, none of the KH H-60 kits come with wiring for the rotor cables.

Wow that looks amazing! I love how grimy it looks!

Pete has finished it and posted these pics at Facebook. It looks awesome. Great job on it, Pete.

This is what he has to say about the kit:

There were really not that many fit issues. However, there are fragile parts like the pins that connect the two tail parts to the center tail part. I found a great picture of underneath the aircraft and the seam of the two fuselage halves seems natural, so if your careful when you glue the two halves together, you won’t need to sand that much. If you plan to do the tail folded, leave it off until final build for ease of painting and it can be broken off easily. Not only did I place glue at the tails connecting points, I also put a small dab of glue between the tail and rear fuselage. 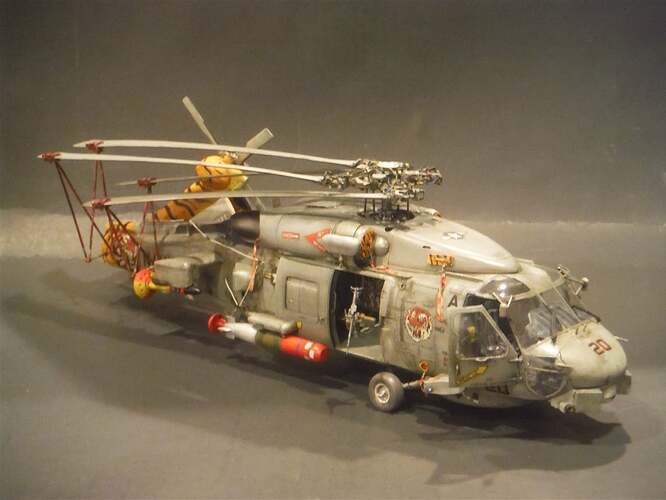 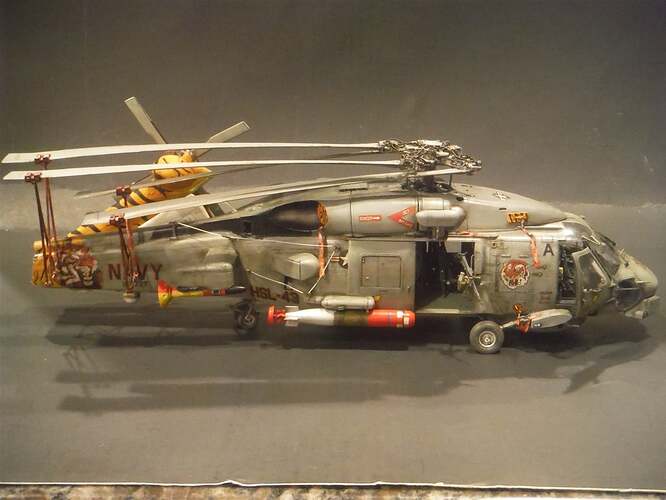 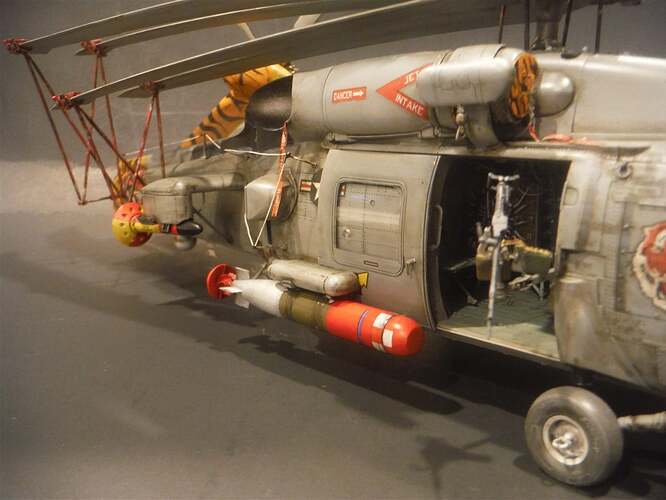 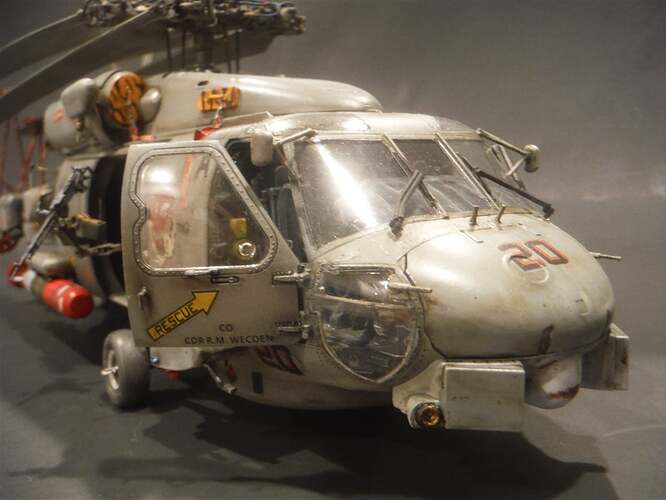 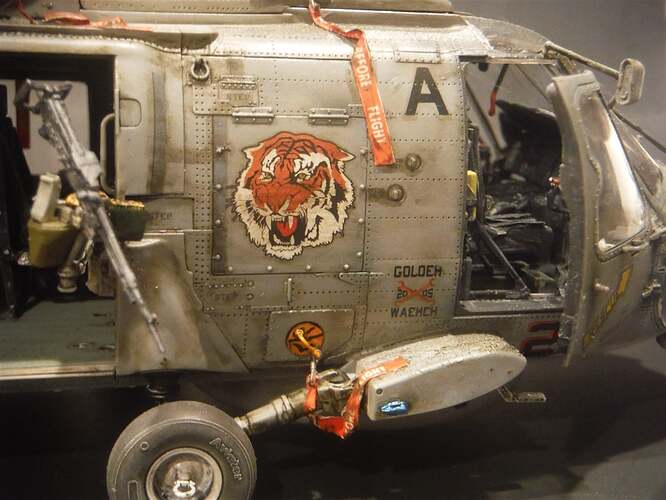 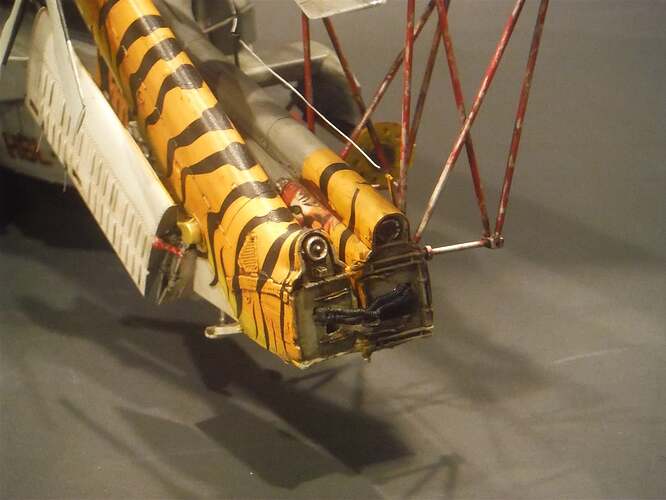 Thanks Gino for doing this for me. Was just about to post myself.

No problem. It looks awesome. Any other build pointers or other pics to add? How about some of the port side?

Good greif, the main rotor assembly looks like a model itself! Damn nice looking whirlybird, you could use this as collateral next trip to the bank for a loan. There are several sharp looking helo graphics for the Navy HSC squadrons at Norfolk ( I’m sure you’re aware), I admire your effort on this one. 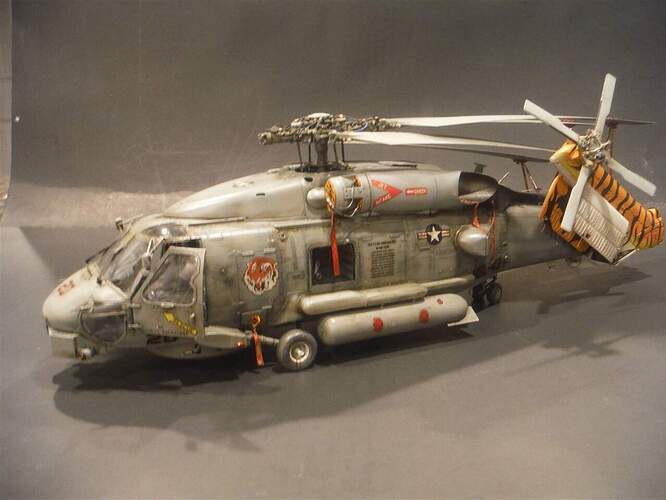 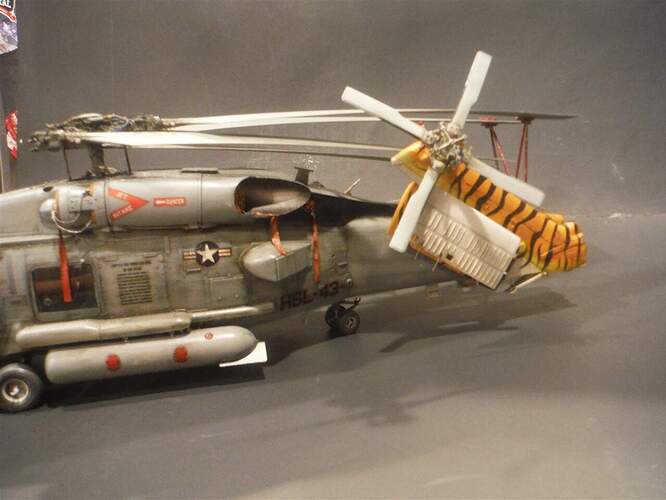 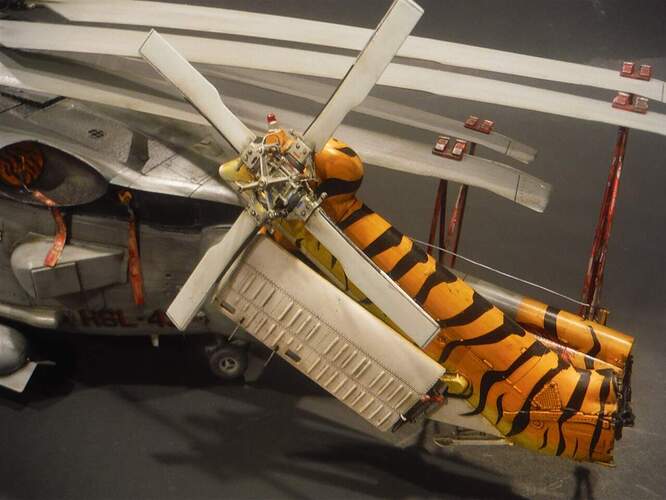 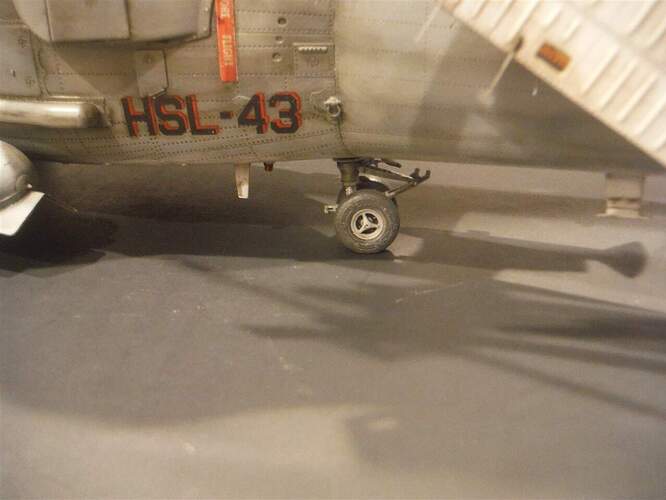 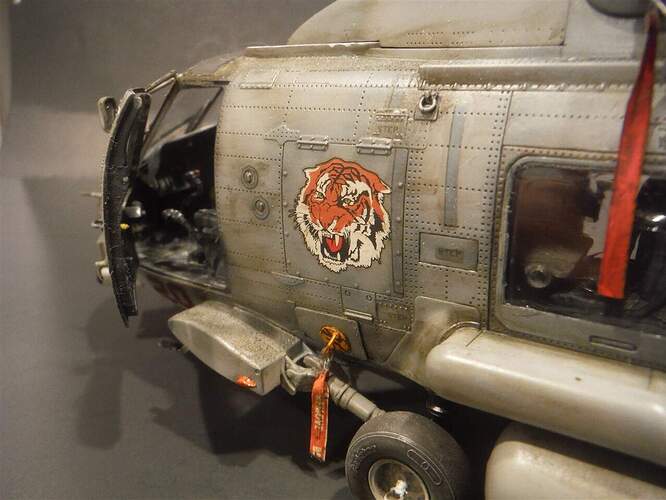 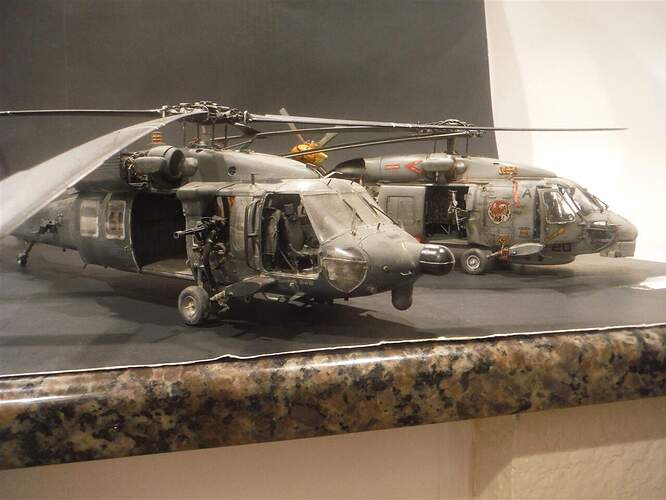 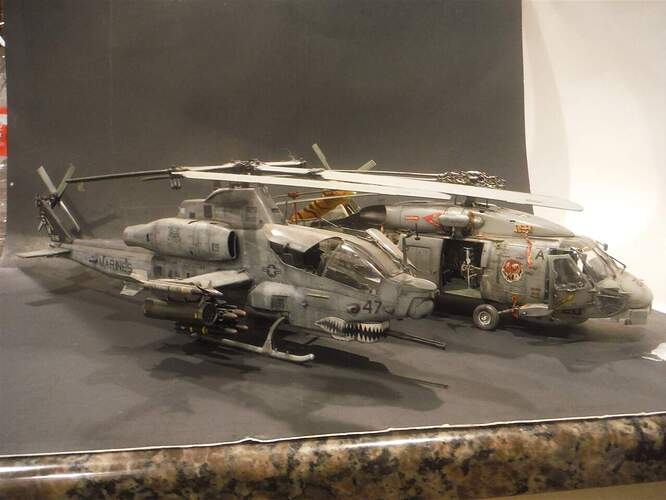 This is one of the reference picture I used for the main rotor. 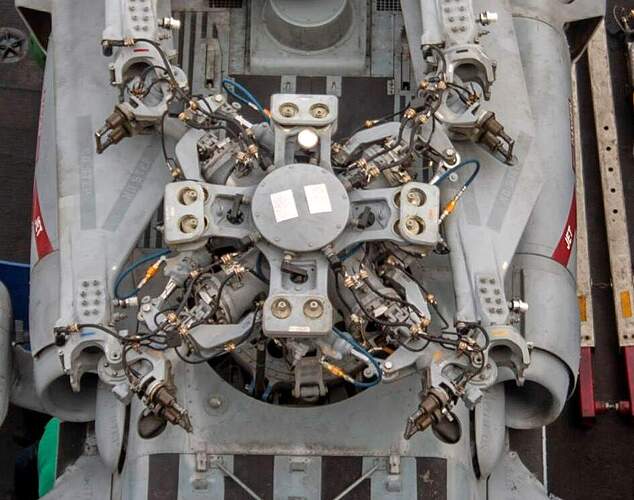 She looks just as good on the other side.

Man, did Kitty Hawk just ‘hand wave’ the folded rotor in the instructions, or what? Like, here’s how to assemble the deployed rotor, and here’s a shot of the rotor supports but there isn’t a single shot of the actual folded rotor head anywhere I can find. 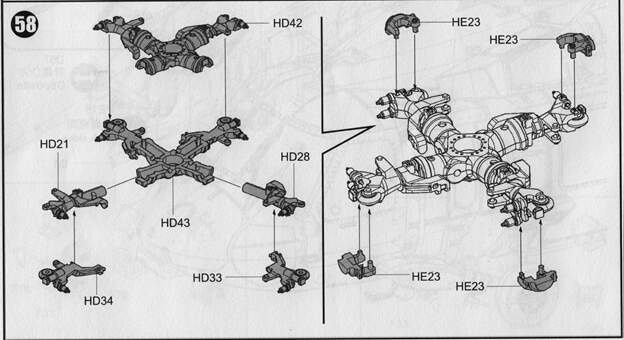 Yes, they skipped them. Here is the step from their MH-60S.

SH-60B step 9, prepare two HD34, then a miracle occurs and the rotor head is ready. First, there is only one HD34 in the kit, the other is HD33 and they are opposites. The SH-60B instructions don’t clearly show this, but the HD34 pairs with HD21 while HD33 pairs with HD28. 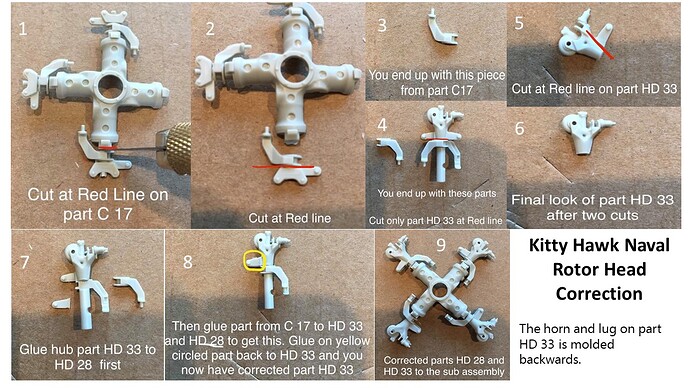 Thank you, Gino, that’s exactly what I needed to see.