Hi all
here I would like to share with you a work I started back in 2008, a long time a go…
Involved is a L6/40 italian light tank, used by german troops after italian armistice during the 2nd World War.

The Kočevje village is located in southern Slovenija, it has always been a german enclave, most of the citizens had german origin, back to the 14th century, it was named Gottschee, it was a mining town.
In 2nd World War the Jugoslavian territory was split between Germany, Italy and Hungary, and the town was incorporated in the Province of Ljubljana under italian government, but after 8th september 1943 all went under german command, the whole Slovenija, was part of the Operations Zone Adriatisches Küstenland.

Kočevje was attacked by three brigades (1st “Tone Tomsič”, 2nd “Ljubo Serčer” and 13th “Loška”) of the 14th [Slovenian] Partisan Division under the command of Lt. Mirko Bračič at midnight on 9th December 1943. The attack was supported by artillery and mortars, whereupon the infantry followed and broke into the city, the partisans quickly managed to capture the village, but the remnats of the German-Domobran garrison retreated into the Gotschee Castle, where it was protected by its thick walls.
It remained there until 12th December 1943, when two German relief columns formed by elements of the 162 (Turk.) division and the 13th Verst.Pol.Pz.Kp. came from Ljubljana , broke the partisan encirclement and rescued the besieged garrison. The city was almost demolished and most civilian population gone, therefore I did not overdo with the furniture inside the house.
The scene portraits the moment when the relief force entres the city on 12 december 1943, as portrayed in the pictures.

The project started by these two pictures taken from the book “Panzer units
in the Operationszone Adriatisches Küstenland 1943-1945” author Stefano di Giusto, wich inspired me and I started to work on the Model Victoria kit, wich is a real gem.
I was lucky as I found several pictures of the house in the background, before, during and after the battle, so I decided to give it a try. 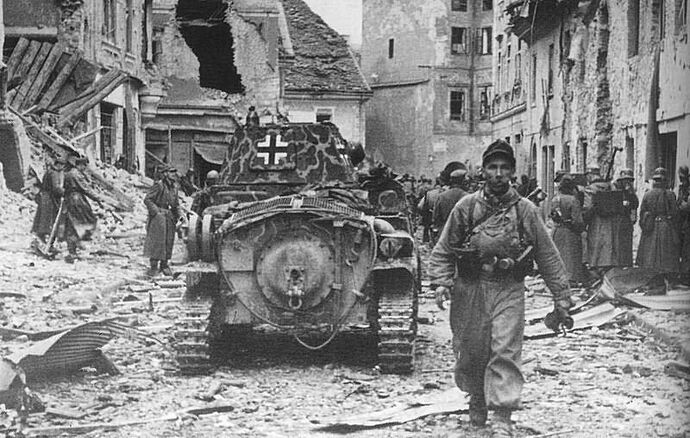 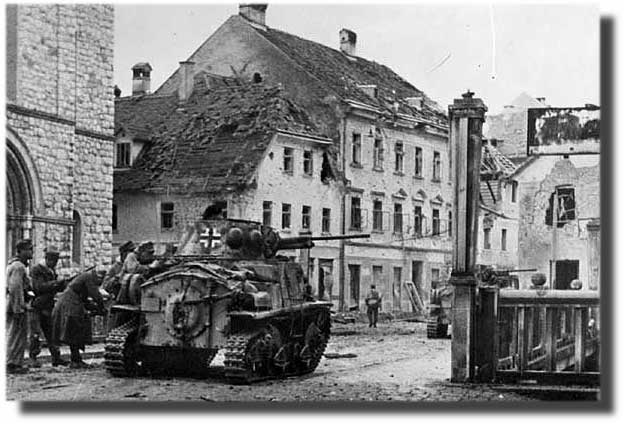 So, stop talking, here are the pictures, enjoy and feel free to add your comments, sorry for the bad quality of the pictures, I took them with my phone. 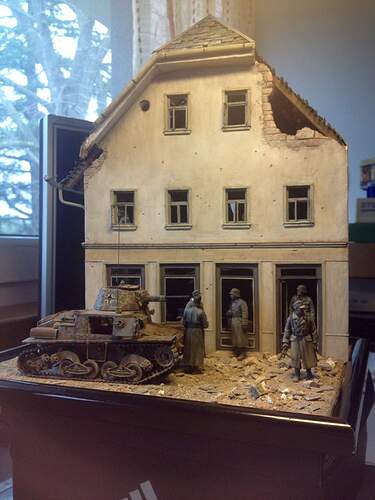 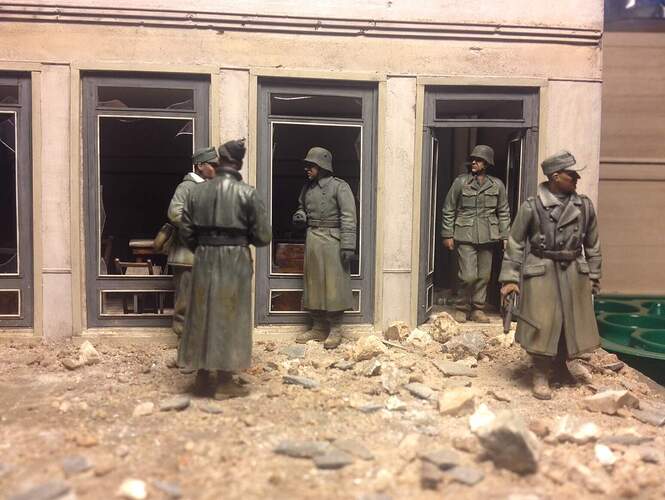 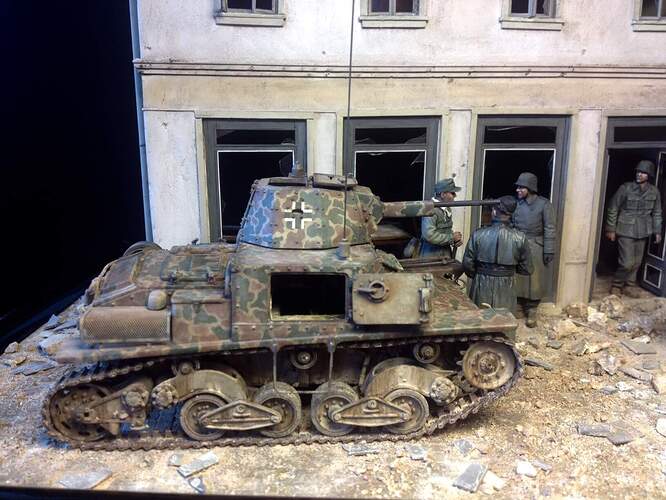 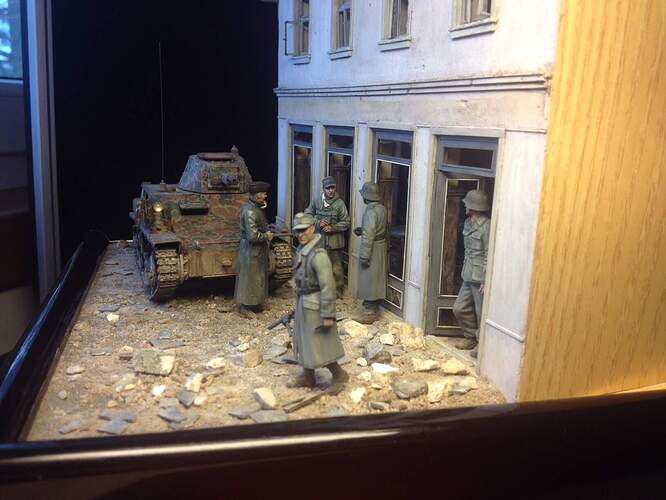 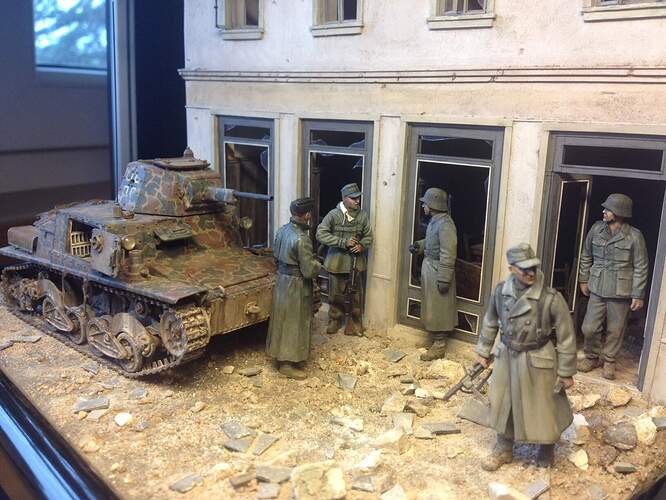 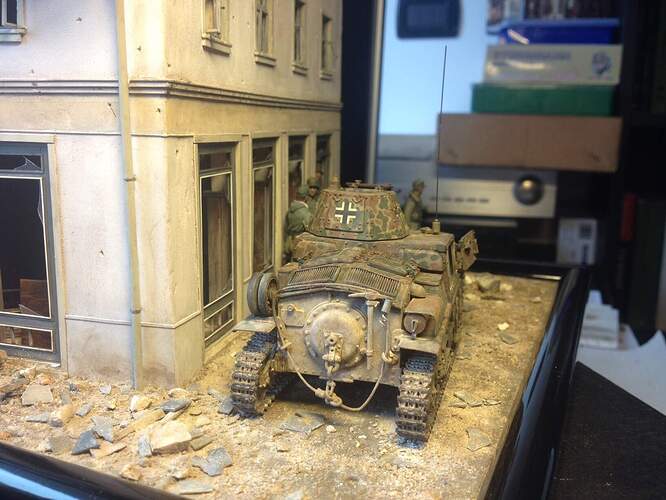 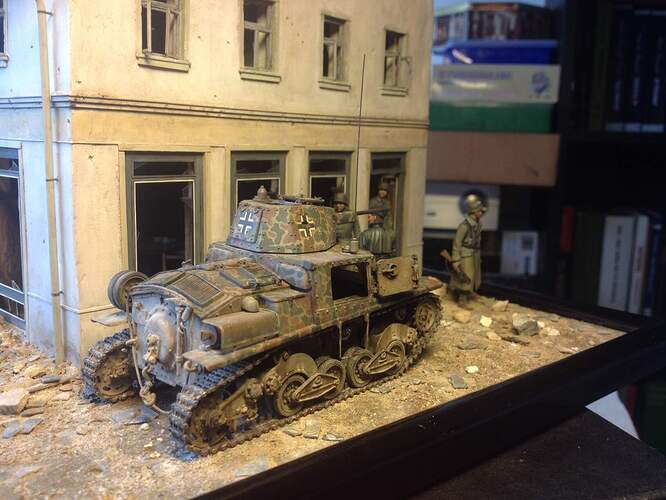 Alessandro, firstly welcome to the new forums and thank you for sharing that fantastic Dio.

The back story really adds to it all and explains the photo and the great rendition of it all you have created in your Dio. The detailing is superb and the figures, tank and building look brilliant. Really well done and lovely to look at. Hope to see more of your work, old or new.

It would be great if you can give some details about the kits, where the figures are from, tank and building etc… whats kit and whats scratch built or remodelled ?? We love all that extra info here lol …

Hi Alessandro. Welcome aboard. I came from Slovenija, i live near the border with Italy, from were i suppose you are from

Astonishing work so far. I like your history research part.

How do you make your buildings? They are beautyfull…

Excellent work with the groundbase, vehicle and figures! And thanks for the historical introduction, very interesting,

Welcome aboard, I second the others. It’s a very nice build. I am also interested in the details for the house.

@Johnnych01 the tank is a Model Victoria kit, a very very nice model, with internal detail available as a separate item, it builds very easy and it doesn’t need any filler at all, I just changed the exaust cover with a pe grill as the kit portrays the early model, while I did the late one, I also changed the radio set with a Fusprechgerät a,d,f and the fire extinguisher with a Tetra Feuerlöscher (see pictures).
The figures are two Yoshi slightly modified, a Tristar heavily changed, a Dragon and another “Frankenstein” made with some Dragon and Minart pieces, heads are Hornet and Ultracast, weapons are Dragon Gen2.
The building is a diorama itself, I made it with some chipwood covered with plaster, then detailed with plastic strips, rods, and so on, all internal fittings are scratchbuilt.
I had been lucky in finding several pictures, of the building before, during and after the battle, so I decided to give a try, it seems the ground floor was a “Gostilna” a pub, so I put a lot to drink there!

@Bruc84 actually I live in Italy some 100 meters from… the Slovenijan border and I have slovene origin, tough due to this pandemy… so far we are, the border is closed! (are you Marko “TMA” from Šempeter pri Gorici friend maybe?)

Here some more pictures. thank you for the kindness!
Cheers and živijo!
Alessandro 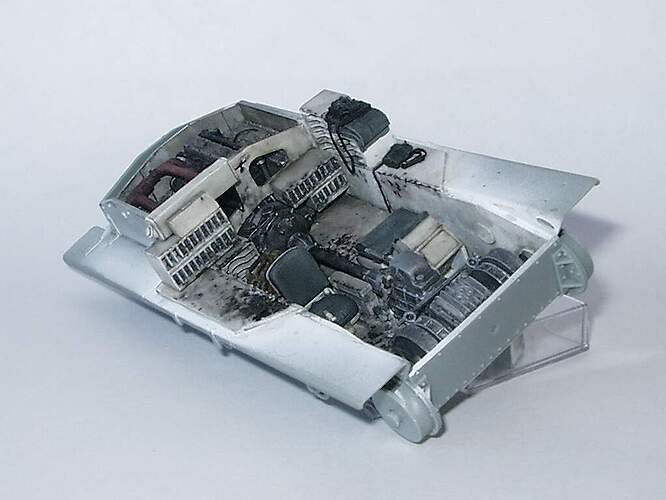 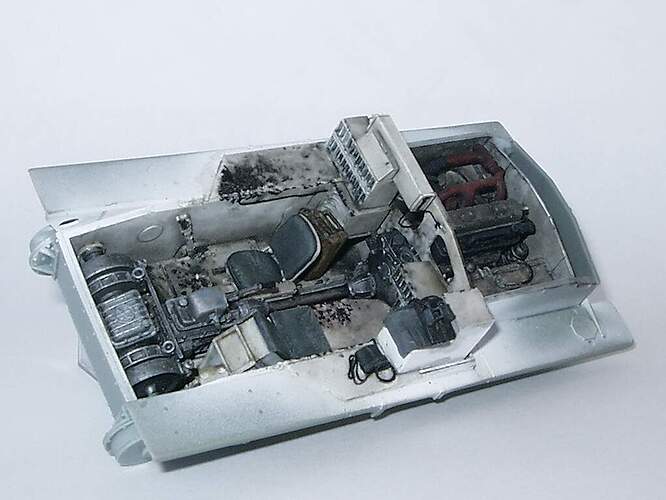 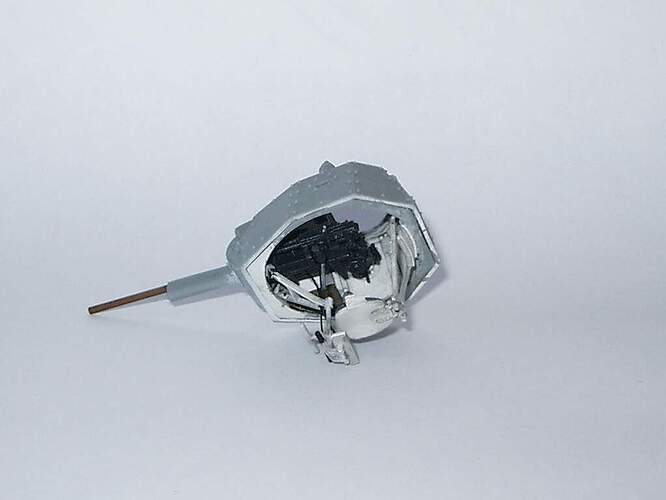 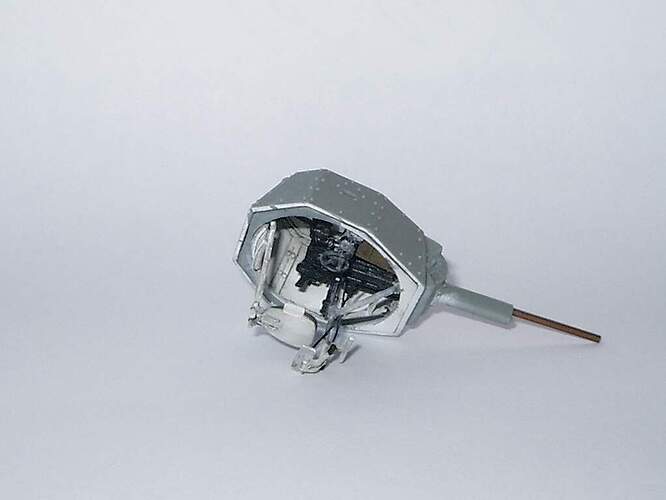 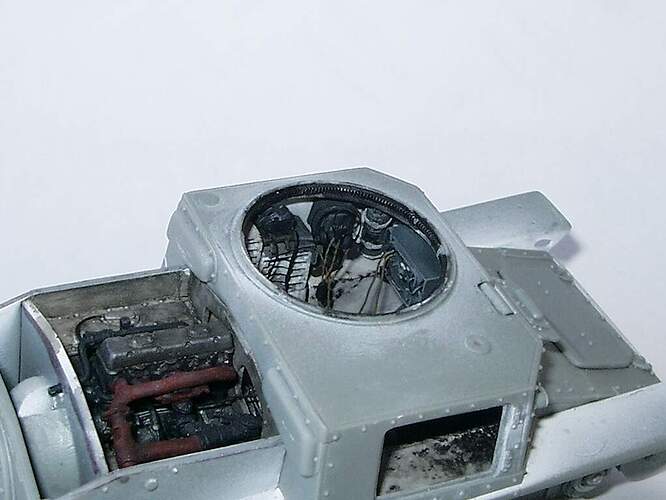 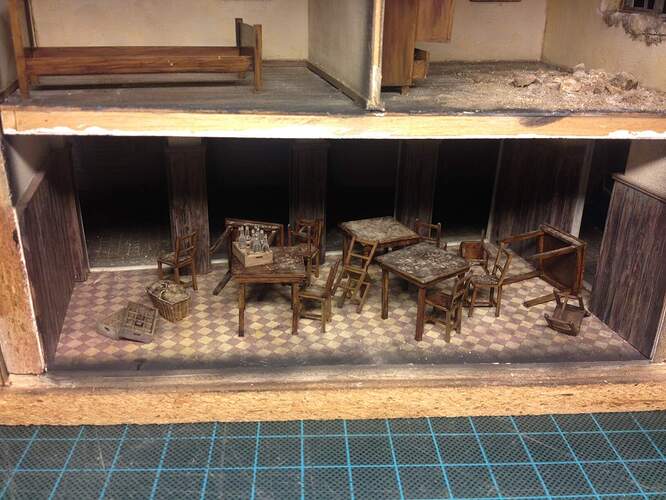 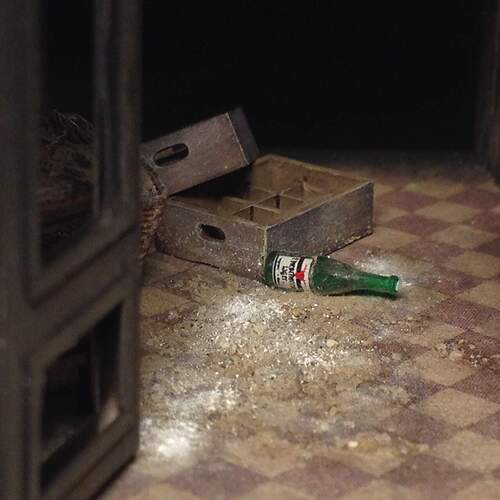 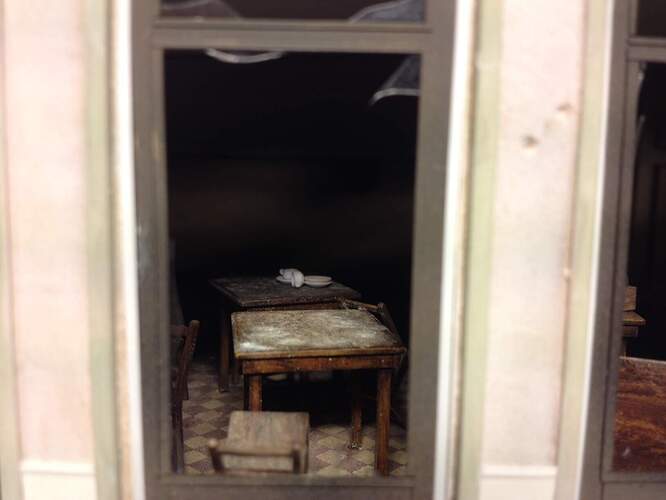 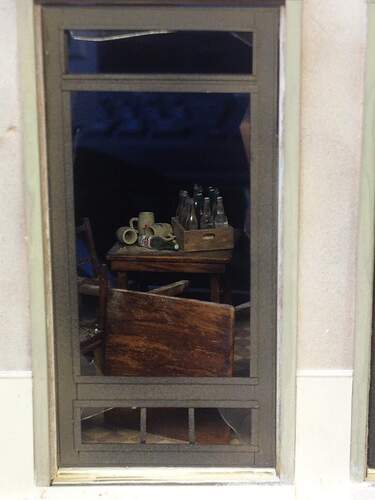 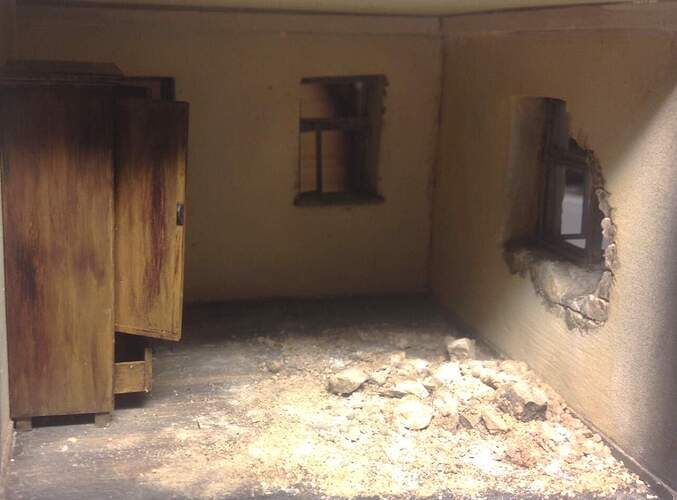 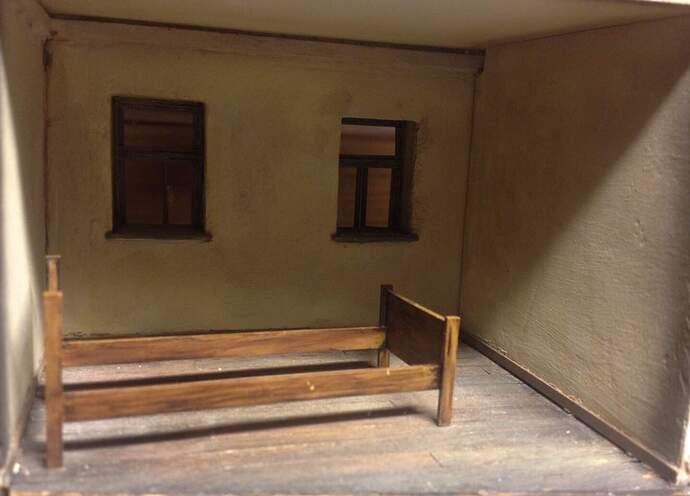 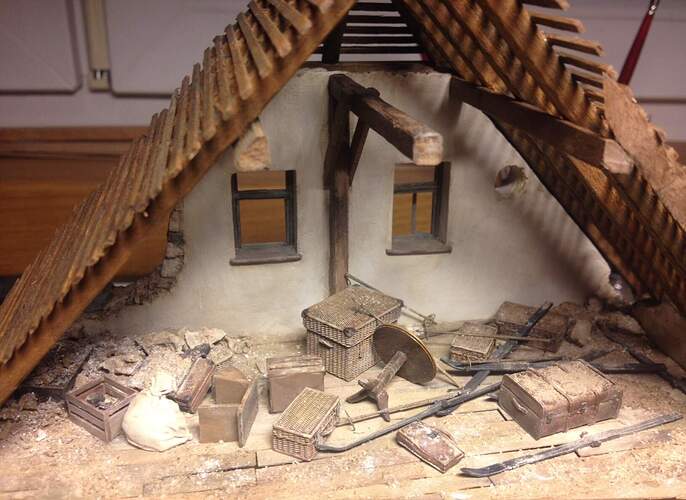 Brilliant detailing … thanks for showing us all.

Only one word describes this diorama, “WOW!!!” Thanks for sharing both the diorama and the history behind it.

Uh… I forgot another picture, the slate tiles on the roof (a real nightmare) I made them with a silicone mould from Diorama Debris and poured in some plaster, then painted them one by one. 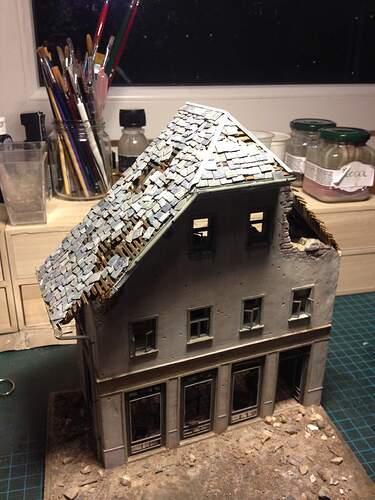 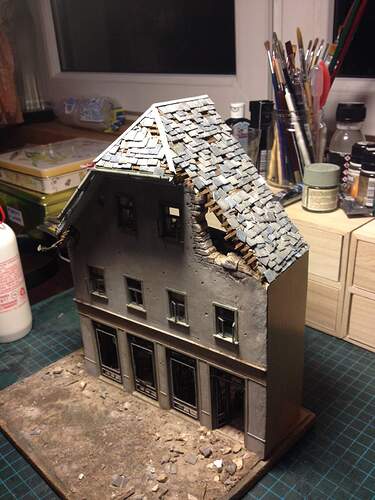 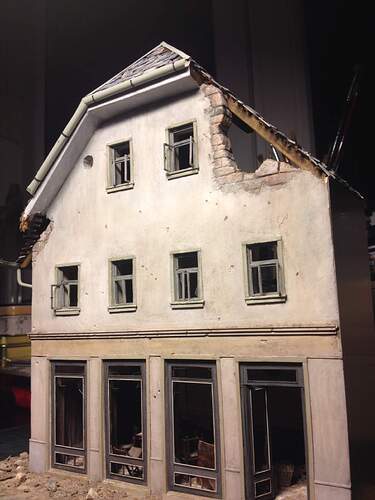 This is really a great dio with an excellent eye, and execution for detail.
Thank you very much for sharing this with us… And welcome ofcourse

Wow! I agree with the others here, this is a study in detail. Every aspect of this diorama is exceptional. Welcome to the forum. I hope you will be exhibiting more of your work here.

A brilliant diorama likes the house, tank, figures a good scene. Thanks for sharing. Hope to see more off your work / Micke

Welcome to the new forums! Wow… the details is awesome! Ditto what Micke said, we need to see more of your great work! 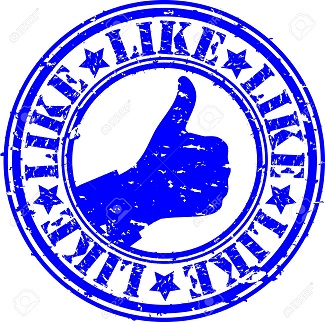 Fantastic work! You really did a great job, especially I like the detailed house! Thanks for cheering! /Erik

Love the building detail. The interior detail in the pub is amazing.

This is tremendous. Thanks for sharing. Please do more!

Hi all, thank you for your kind words, it took me 13 years to build this one, tough I did also other things in my life (married and have a child) but I have some other projects wich are close to the end, I will post some other older works soon.
Cheers and have a nice weekend you all
Alessandro