Lanz Bulldog Tractor by MiniArt ~ Think I have to move this one to the head of the line!

Had this one on order from Scale Reproductions in Louisville:
Here is my first photo only minutes after delivery! (Just yesterday 3/8/22) 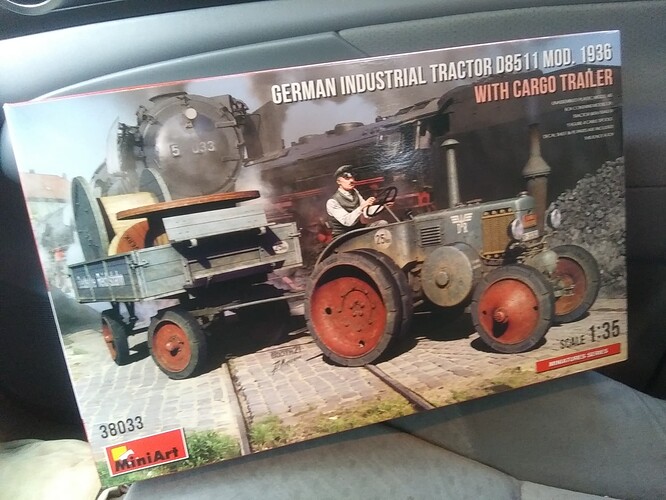 This is looking to be a really fun kit!

Judging by the instructions and the two large enclosed flywheels, I am guessing, this was a one cylinder diesel or kerosene “hit n’ miss” type engine. Very noisy but very powerful! 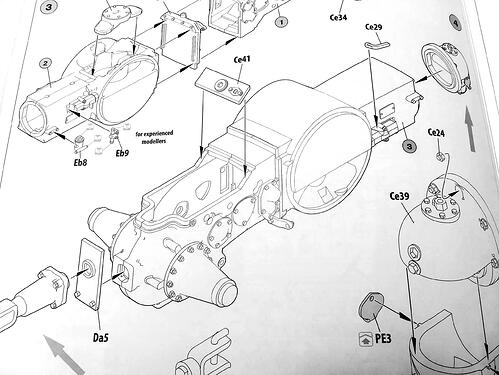 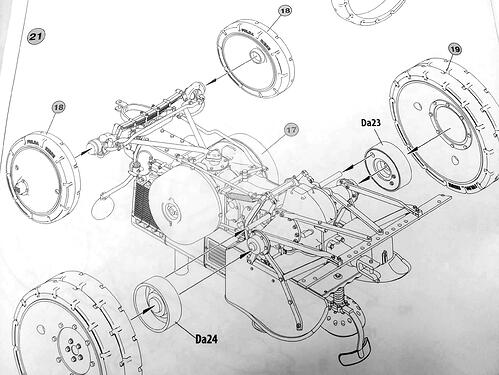 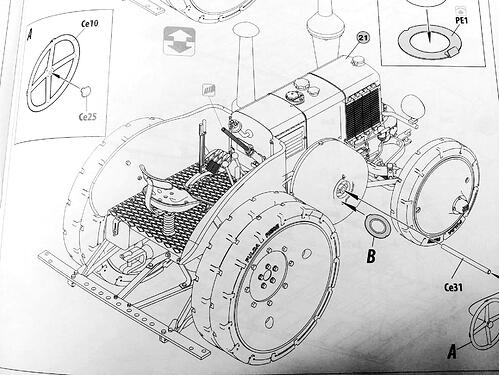 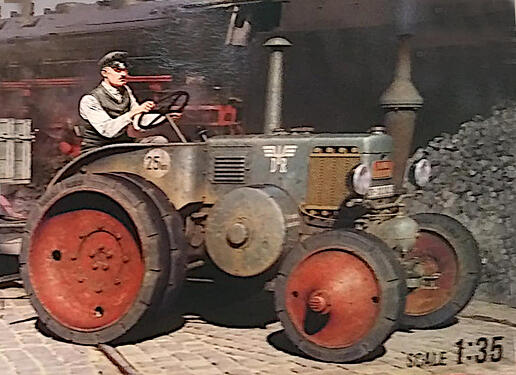 This model tractor is (or was ~ thank you SO MUCH, Mr. Putin) available in any number of variations from MiniArt, mostly differing in the type of wheels provided, number of figures and cabs provided, plus different loads and wheel sets offered for the wagon/trailer.

"The Lanz Bulldog was a tractor manufactured by Heinrich Lanz AG in Mannheim, Baden-Württemberg, Germany. Production started in 1921 and various versions of the Bulldog were produced up to 1960, one of them being the Lanz Bulldog D 9506. John Deere purchased Lanz in 1956 and started using the name “John Deere Lanz” for the Lanz product line. A few years after the Bulldog was discontinued the Lanz name fell into disuse. The Lanz Bulldog was one of the most popular German tractors, with over 220,000 of them produced in its long production life. The name “Bulldog” is widely used in Germany as a synonym for tractors even today, especially in Bavaria.

The Bulldog was a simple and easily maintained vehicle due primarily to its simple, single cylinder, horizontal, two-stroke, hot bulb engine. Initially the engine was a 6.3 litre, 12 horsepower unit, but as the Bulldog evolved the engine was increased to 10.3 litres and 55 horsepower. While hot bulb engines were crude, they were easy to maintain and could burn a wide variety of low grade fuels – even waste oils. The engine was designed by Fritz Huber."

NOTE: I have confirmed that all the Lanz variants were single cylinder, usually kerosene fueled, “hit n’ miss” engines. Ranging from, I believe, 12 to 55 horsepower.

Beautiful little YT video showing both the starting procedure for these one cylinder engines and also some “in the field” footage as well: 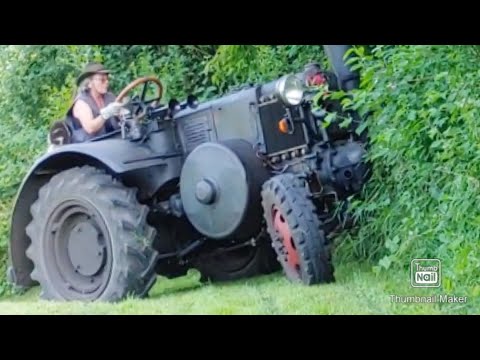 I am about 2 hours into the build and I would caution everyone that these sprues are intended to contribute to any number of slightly different variants of this model. So it may go without saying that there will be multiple parts that are intended to go unused.

On the first pages of the instruction booklet where MiniArt shows the sprue layouts there is NO indication given of just which parts are not to be used.

To make matters somewhat worst the various sprues are lettered with both a primary CAPITAL LETTER AND a secondary lower case letter. Therefore while there may be more than one sprue lettered “C” but of those there will be only one that is lettered “Ce”. So confusion is possible!

So far I have found two different left bonnet sides, two different instrument panels (funny as there is only one “instrument” on any of the Lanz) and two just slightly different rear hitch assemblies.

I feel I do need to say something here:

While the mold quality is crisp and appears excellent, I am less than impressed with the way the axle/gear box halves and cylinder halves do/don’t really line up all that well. Care needs be taken to get everything in these two first early structures to line up. Sometimes I had to sort of “average” the upper seam alignment with the bottom alignment, split the difference and then sand down both top and bottom seams until all was smooth. Also there seems to be a somewhat gross lack of alignment pins for putting these first important assemblies together. Honestly, it hurts me to say this but I was surprised and disappointed. I expected to see much more precise mold engineering at this point.

“A Swiss watch it ain’t”

However, by the time I got to the hood (bonnet) assembly things seemed to have improved a bit with my finding good alignment there and also with the flywheel covers.

This bottom crank case cover seems a really odd, fiddly part. (# Ce23) The sides of that round bolted cover plate (red Arrows) have to be tapered with a small file to get the cover to sit level in the opening without it forcing the crank case halves apart ~ but at the same time the entire part kept turning on its’ side and falling down into the interior.
Finally I hit upon an idea; I filled that crank case void with 5 cut down cotton Q-Tip heads so the part could not possibly fall in. Then a generous amount of glue filled any possible open seams for a good solid connection. However, do still keep an eye on that round cover plate to make sure it stays level as the glue sets. 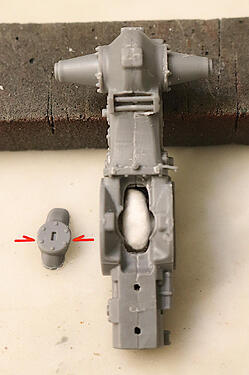 The front axle radius rods attach to this plate.

Here is a cab variant of the Lanz that I am not sure if MiniArt ever planned for: 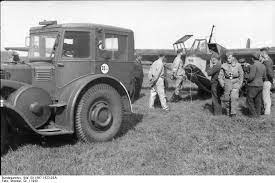 I believe the photo credit line says Bundesarchiv - Location Unknown.
But I cannot be sure as the original photo file is so small.

Three hours in:
The cylinder, crank housing and rear axle/differential are assembled. As are the hood, hitch, radiator and twin flywheel covers. 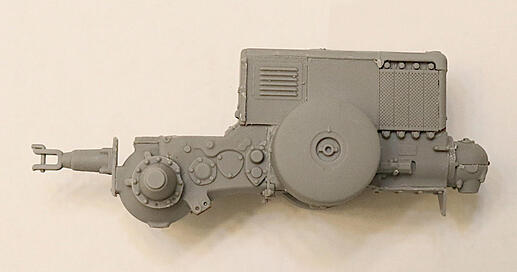 My son and his family live in Pikeville in eastern Kentucky. On our way to visit, I always try to arrange a stop at Scale Reproductions. Great staff & service & great stock of stuff.

One of the guys who worked their used to live in Evanston IL. There was a hobby shop in Evanston that had some of Shepard Paine’s dioramas on display. The good old days. 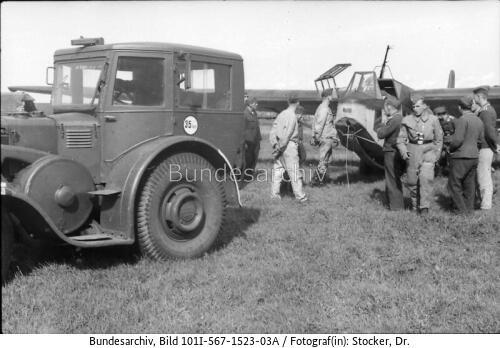 Posted elsewhere on the internet by Tom Johnson: 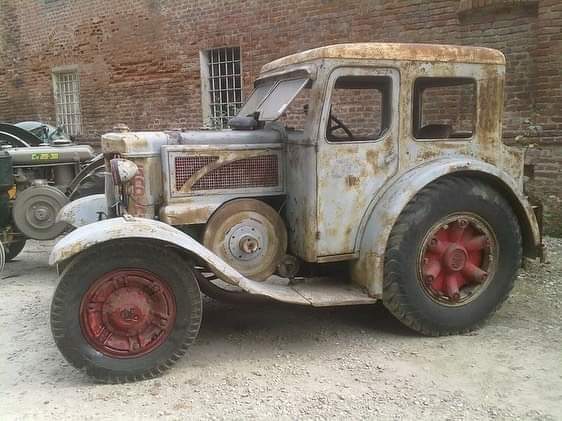