Once again I am prematurely posting a build from my work bench, not quite finished since I goofed up the window panes by spraying with the slightest hint of Alclad green tint leaving a matte finish then trying to ressurect the shine with Floquil clearcoat arrghh . . . 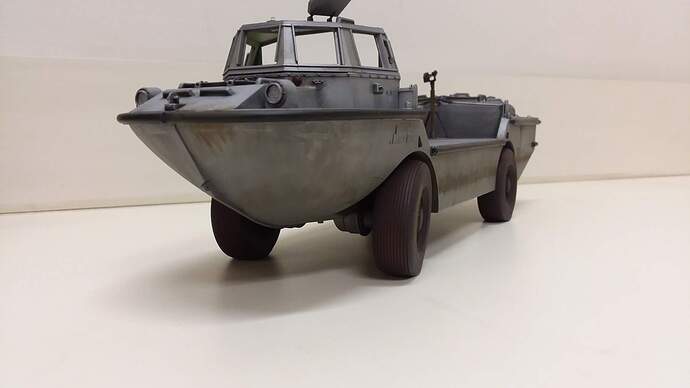 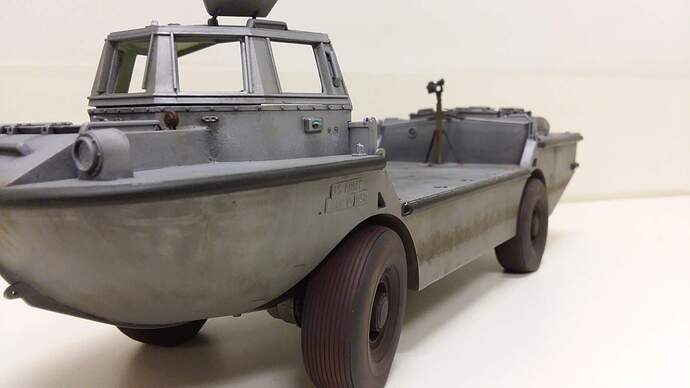 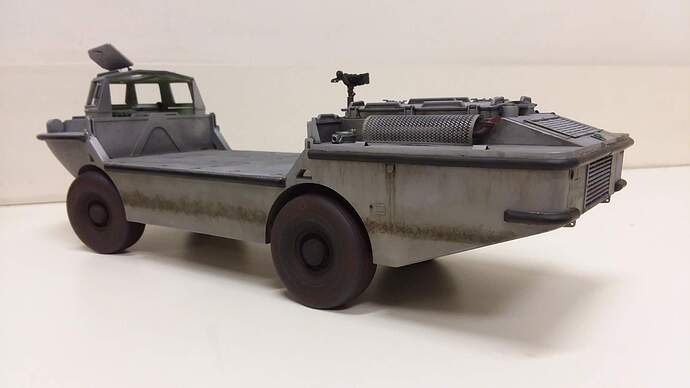 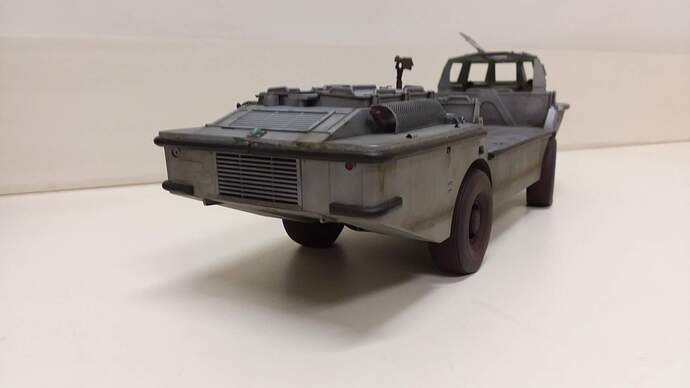 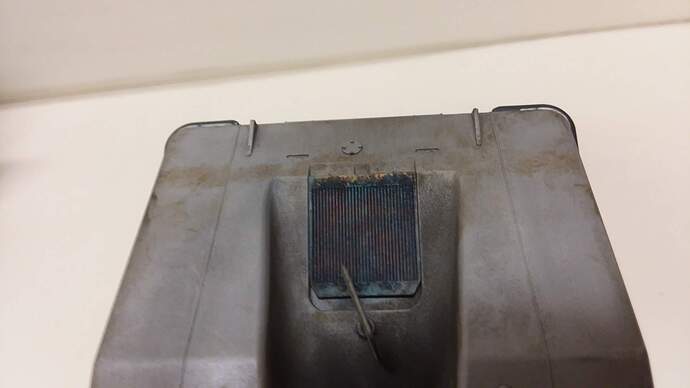 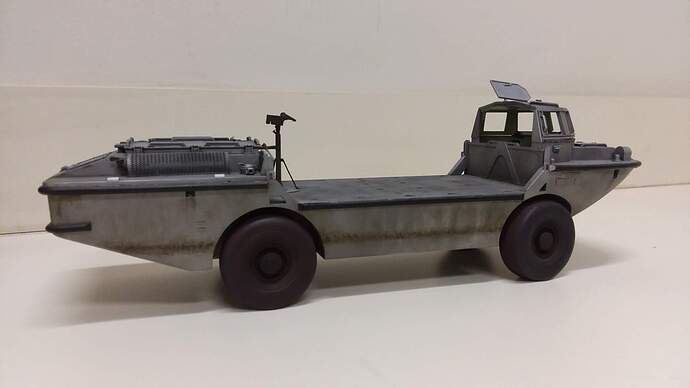 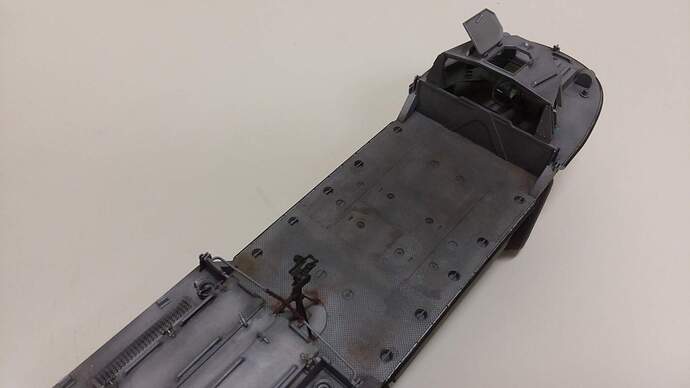 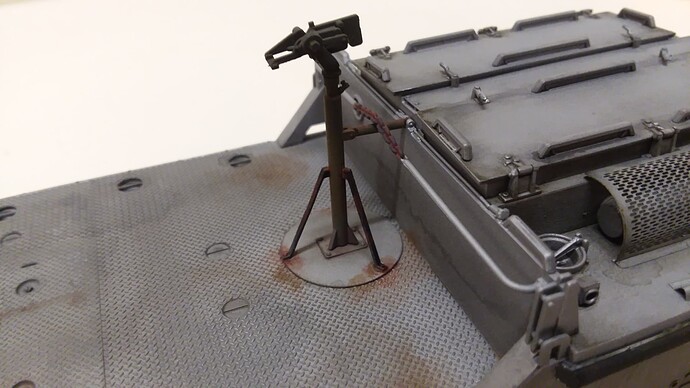 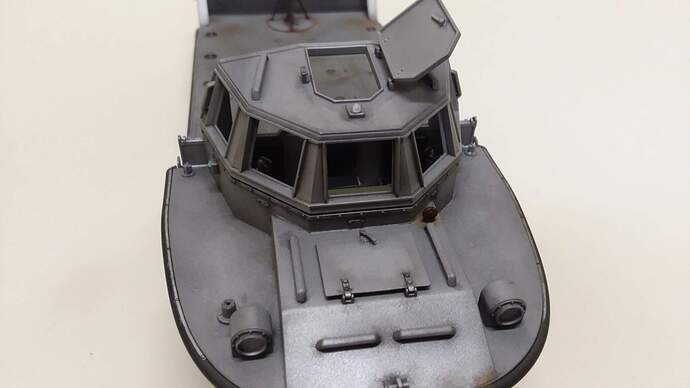 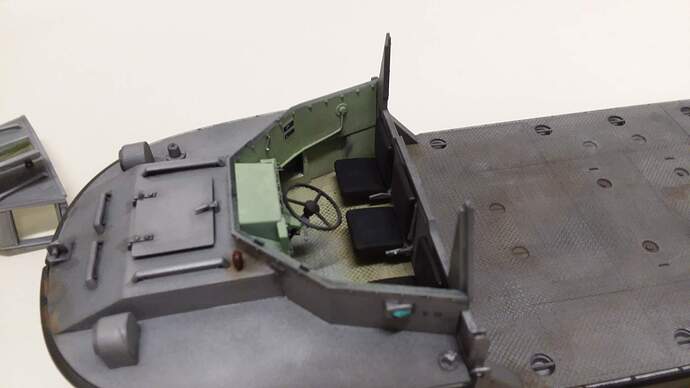 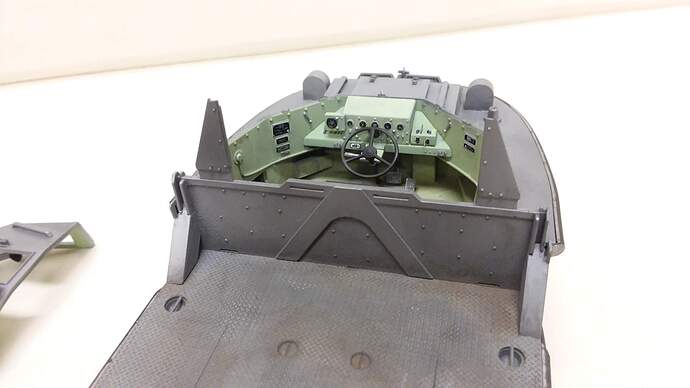 . . this was a fun build, Gecko did a splendid job reproducing an odd ball vehicle that I never dreamed would be marketed, it reminds me of something you’d see in an old cartoon from the 1940’s, Steamboat Willie perhaps.

This was the first time I’d built an metallic finish and I discovered the airbrush has to be 90° perpendicular to the surface, otherwise the metallic flakes don’t lay down and the result, for my experience at least, was a black mottled effect and a raised texture. The base coat was too shiney so I oversprayed that with a much dilluted “wash” of light gray, still not what I was going for so I washed the whole model with alcohol using a 1/2" wide fluffy brush. Alcohol over lacquer paint has an intresting effect and in this case it created a weathered salt water exposed look.
Prior to building I spent quite a few hours scraping and sanding the hull bow and sides trying to get a stressed or fatigued metal appearance and it looked convincing enough but totally disappeared when the paint went on.
The pilot house is detailed nicely but there’s room enough if you choose to take it up a notch. The biggest problem I had was the PE ID plates, in fact not the peices so much as necessitating CA glue, me and that stuff just don’t get along. Second to that was fixing the hull bumpers to the model, the curvature of the bow was particularly irritating but it’s the nature of the game.
I can’t end this without giving a huge shout out to Sprue Bros., the kit delivered a bit banged up but intact, I had checked the contents for damage but it wasn’t until I started planning the build strategy a few weeks later that I discovered the wheel/tire sprues were missing. Without question or hesitation they exchanged a replacement kit, smooth as silk and totally cool for me 'cause I hate hiccups. Thank you Sprue Brothers!.
Forgive me guys for posting a not quite finished model but I get impatient and need to move on, there’s a T54 for a campaign build that I need to get done but I just can’t get my pointy little head into it, and the Huey campaign starts soon so I needed to get this one off the table.
I hope y’all like it, let me know what you think.

It’s the “oddballs” that really catch the eye. Nice work on this one!

That paint looks really cool Cajun. Might not be the effect you were going for, but it works.

Can’t tell the windows are a bit frosted from the pics, but to be honest, just a hint of dust on a windscreen cuts the gloss by a huge mark anyway. Too glossy and they look out of scale too.

Having been on one of these, the actual size of them is deceiving in pics. They are quite a hefty beast in reality. Thanks for posting.

Ummm, I forgot the obligatory pics on the display, didn’t really have a plan for a LARC so now it’s adapt and overcome . . . 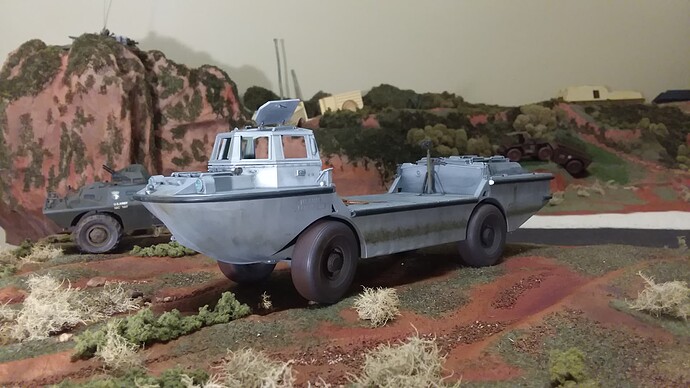 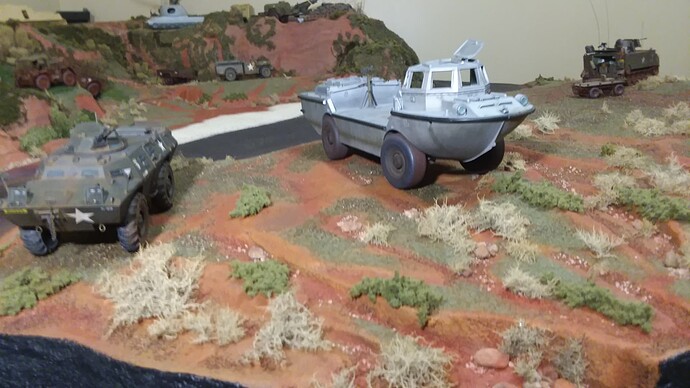 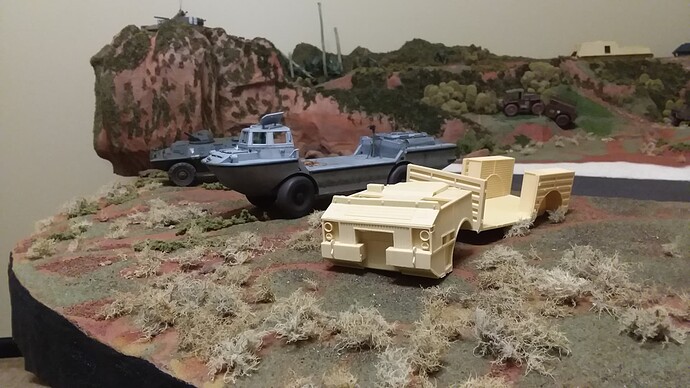 Thanks for the comments, still have to weather the torsion clamps for the g’unnel aprons, add the rear brake light and install the windscreens and wipers.

I have the one from Commander Models/Iron Shipwrights, Perfect Scale Modelbau also offers one, there are nominal differences between the two, something about the airhorns on the front.
Very solid wheels though at full inflation, this being the suspension they should be more compressed.

That’s quite alright Mate! I have to finish the Gecko Skidteer and Panda’s Hmeee first botth are close to painting. Just have to boot myself in the rear and get going. Now I can see what’s ahead for me. Looks straight going with few small parts. thanks for the pix.

Hey, cracking looking model! I am so tempted to get one of these not least as I recently found out that the Brits had one (I’m assuming only one, presumably on trials) back in the 50s.

It is indeed a deceptive model - quite a size.

Great looking LARC-V.
It will go perfect in your large diorama.

Outstanding model. Fantastic waterline stain - how did you do it?

Thanks Matthew @SSGToms, I used AK’s “dark winter” wash for German AFV’s (I think that’s the name), I started out using bit of sponge/foam to blot it on and then it was just a process of checking reference pics and going back and forth with a brush reaching for realism and using NAPTHA to give a clearer demarcation below the water scum for a cleaner hull. to be honest there is limited info on the www. for the LARC V and the boats used for ship to shore didn’t necessarily have a water line that prominent, mine however is one used farther in country and exposed to more stagnant water . . . at least that’s my story line. I don’t know how far inland these rigs actually went, I have read that the 101st had a couple but nothing about their deployment.

That thing is pretty neat. Never saw anything close to that, but also was never around big water all that much. What the 101st used them for is kinda strange as they spent the majority of their time in the hills and mountains. I’d be thinking down in the delta or perhaps working out of one of the harbors. Heard once that they had a couple “ducks” down near Saigon / Vung Tau area
gary