Having Finally commissioned the 1/200th Scale Bismarck, I can’t quite face another Battleship in that Scale, and I haven’t finished the research to on the Rodney backdate the kit to may 1941. So now for something Completely different. 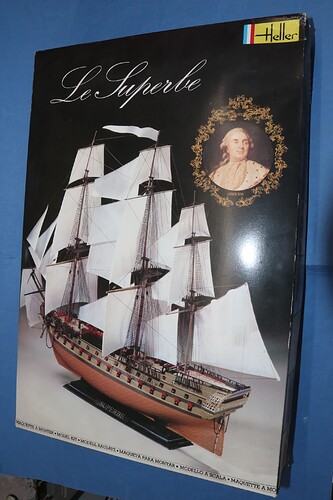 This Kit has been in my stash for quite some time.it is an oldy, but all in all the mouldings look quite good.

Vacform sails, they have gone brittle with age, but might be salvable. 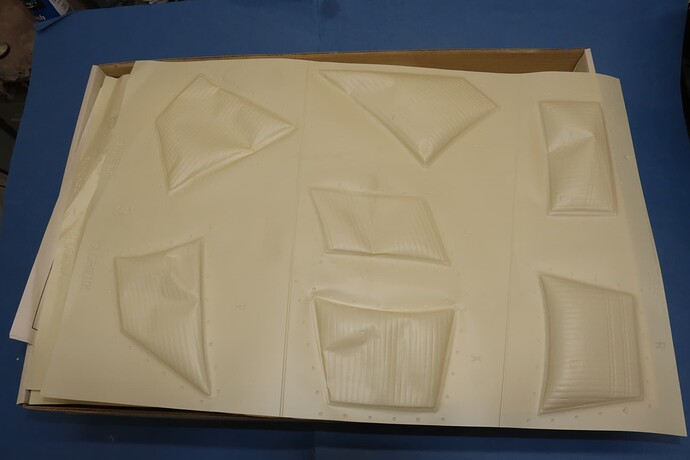 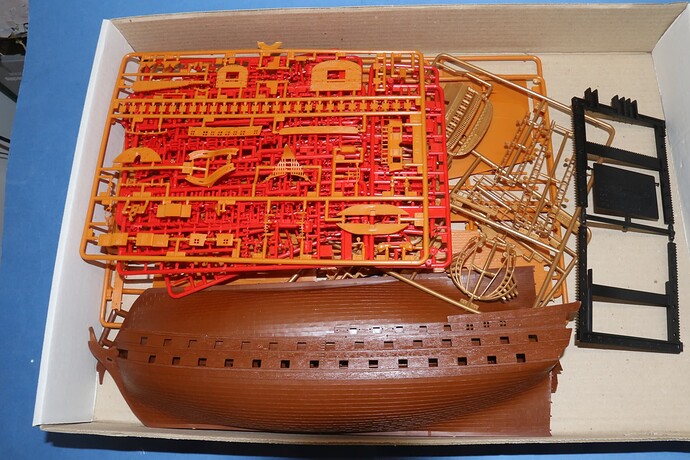 The guns and some of the other internal parts are moulded in red, and the heavily carved parts in a goldish colour, 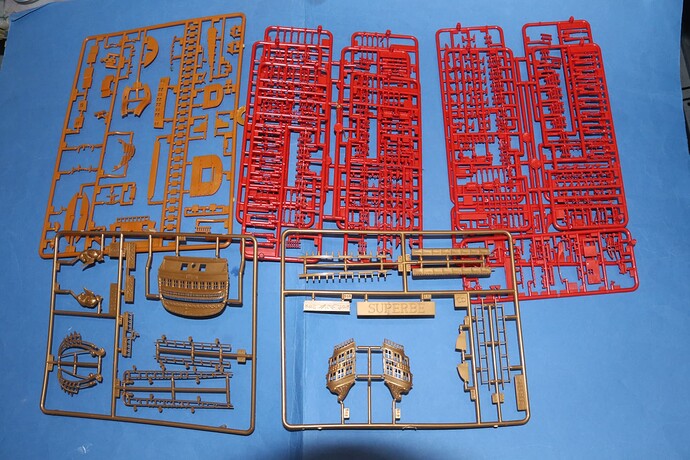 Most of the structral parts in tan.

The hull halves in dark brown, the strange black thing is a jig for making the ratlines. 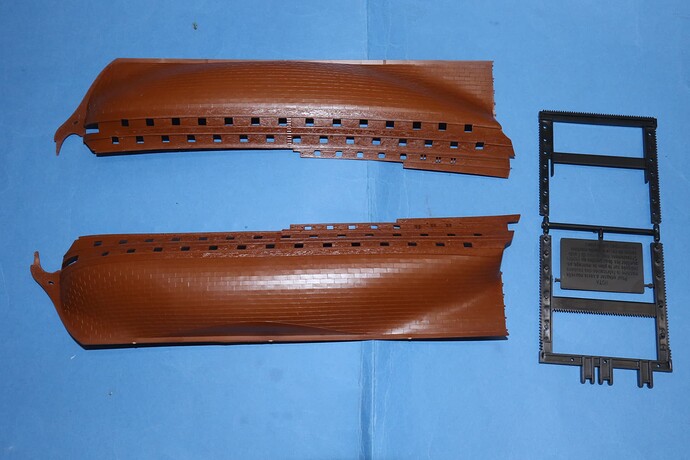 A stand is also provided.

Cool, Si - sailing ships are a definite departure from the usual steel navy warships! I look forward to watching this one take shape.

flashbacks to Victory and her rigging … Lol…

Si, ref the rigging jig… Guard it with your life… It will become your new best sanity saving friend …

This one has me confused, as I’ve seen it dated to 1770, but the 1738 vessel of that name was lost in 1759. The next Le Superbe wasn’t launched until 1784 and lost in 1795. If the kit is of the latter, the good news is that it should be capable of being built as any of the standardised “Temeraire” class, many of which were captured by the Royal Navy where many served with distinction. The “Duguay-Trouin” of 1800 was captured by the RN on the 4th November 1805 (having escaped from the Battle of Trafalgar) and served as HMS Implacable until 1949. In the impoverished days after WW2 the RN couldn’t afford the maintenance of the old vessel, and offered to return it to France, but the French (in similar financial straits) refused “A defeated boat has no right to return to its country!” and on December 2nd 1949 she was scuttled off the Isle of Wight.
If you are bold enough to attempt the conversion, Implacable’s Figurehead and Stern Gallery are preserved in the National Maritime Museum at Greenwich. 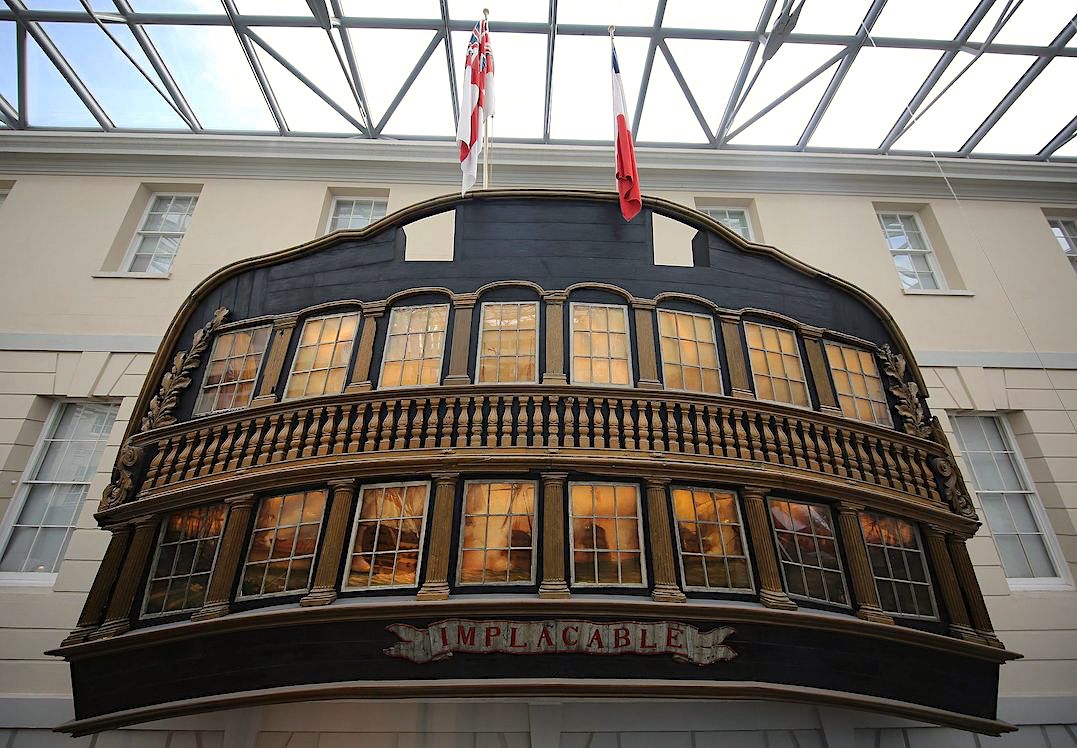 Thanks for posting the Implacable - Did they have glass windows in the stern gallery back then?

Did they have glass windows in the stern gallery back then?

Certainly, and they had had them for quite some time. But the panes were small and the windows would be removed when the ship cleared for action.
I suspect the preserved stern gallery is not the original, as it appears similar to the more austere style mandated by the Admiralty which was used when HMS Victory’s stern was rebuilt during her 1800-1803 refit.
Implacable was quite roughly treated during her capture a couple of years later so the stern gallery might be part of the repairs.

Wow, that is indeed something different!

Welcome aboard Tim, It is a departure for me, I haven’t built anyhing like this in many a long year, but I am looking forward to getting stuck, hope to find some time over the weekend.

Welcome aboard John, much appreciate the advise.

Thanks for posting Tom, I haven’t visitied Greenwich for quite a while, must go back and have a look. The thought of converted her into a captured ship is appealing, but I think I will play this one safe.

Welcome aboard Danie, very different, a change as thye say is as good as a rest.

After this, we look forward to your 1/1400 Sovereign of the Seas.

The thought of converted her into a captured ship is appealing, but I think I will play this one safe.

The conversion to Implacable in her “As Scuttled” state would probably be quite onerous given the changes over time, but the kit as it is may well represent one of her full sisters which passed into Royal Navy service while still quite new and therefore still likely to be (like Superbe) “As Built”:
Superbe Launched 1784 Wrecked 1795 11 years old, no rebuilds found.
Aquilon Launched 1789 Captured 1798 9 years old, becomes HMS Aboukir
America Launched 1788 Captured 1794 6 years old, becomes HMS Impétueux
(The RN already had a HMS America, so the vessel was named for a full sister captured on the same occasion but accidentally burned before being commissioned in the RN)
Généreux Launched 1785 Captured 1800 15 years old (Her ensign, a 17m by 8m Tricolore, survives)

Additionally, full sisters Fougueux sank after capture and Timoléon blew herself up at Aboukir.
Pompee of the second batch of the Téméraire class was captured brand new at Toulon in 1793, while Tigre, launched the same year, was only two years old when captured.
None of the Large,Short, or Small variants served with the RN except (of the latter group) the Venice-built Rivoli and the Dutch-built Royal-Hollandais, captured on the stocks at Flushing, dismantled, shipped to London and completed as HMS Chatham.

P.S. This is a build log from a chap who built Le Superb as one of those in RN service, it contains links to some other interesting builds:

After an 18 year paternity leave I am returning to model ships with Heller's 1/150 scale Le Superbe. I am a British-born Canuck who spent many days in the 1980s at the https://www.historicdockyard.co.uk/ waiting for the ferry to my grandparents on...

After this, we look forward to your 1/1400 Sovereign of the Seas.

Well mate, you might have a bit of a wait, after my 1/700th Konigsberg I have foresworn anything smaller than 1/350th, that does not rule out another “woodon wall”, No promises, but having been to Stockholm the Wasa might be on the cards.

Very interesting, the Spartiarte build in particular. Much appreciate you posting it, also the information about the captured vessels. I learned when I made the move from 1/700th to 1/350th scale, even that shift is a different ballgame, far more areas to detail. This time I am going to walk before I try running as the ship of this period I built was HMS Bounty about 35 years ago, also this was the first kit Mrs Duster bought me as birthday present just after we were married, so I had better make a good job of it, so no risks. If this build goes well and I get hold of another one, well that is a different matter.

I do very much appreciate your input.

Heck yeah! I’m on board for this Si!

Will be great to see you work your magic on Le Superbe!

I will do my best on Le Superb. It is not a new kit, but a was 74, the backbone of the fleets of the revolutionary / Napoleonic wars, and this kit and the one of a sister ship are the only IM kits of 74’s in a decent scale. It is a real sea change for me, but I am looking forward to the challenge.

I will open a new topic within the next couple of weeks with some pics of the finished “big bad boy”.

this was the first kit Mrs Duster bought me as birthday present just after we were married, so I had better make a good job of it, so no risks

Ah! Now I appreciate the need for a conservative approach…
No more big sailing ships for me, the rigging is beyond me. So small stuff (wargaming) or with minimal rigging. Space dictates I don’t usually go bigger than 1:600th and tend to run with the flock with 1:700th. Accordingly, I’m contemplating a Warlord Games “Black Seas” plastic Third Rate as a comparison to 1:700th models of vessels of more recent eras. The price is for a single plastic sprue Supplied unpainted

Done as a hulk it would be authentic up until the mid-20th Century, I think the last third rate in the U.K. was HMS Cornwallis which was broken up in 1957, surviving her sister HMS Wellesley, he last British Ship of the Line to be sunk by enemy action (bombed by the Luftwaffe in 1940).
The other alternative for me is to build the vessel on the stocks. There is a pub called “The Ship Launch” locally, it once had a sign which depicted that, the ship on the slipway with only the lower masts stepped and braced with a little rigging so she could dressed overall. No guns on board so port lids closed, an even easier build.

I want to give you some encouragement. It is a real nice kit: 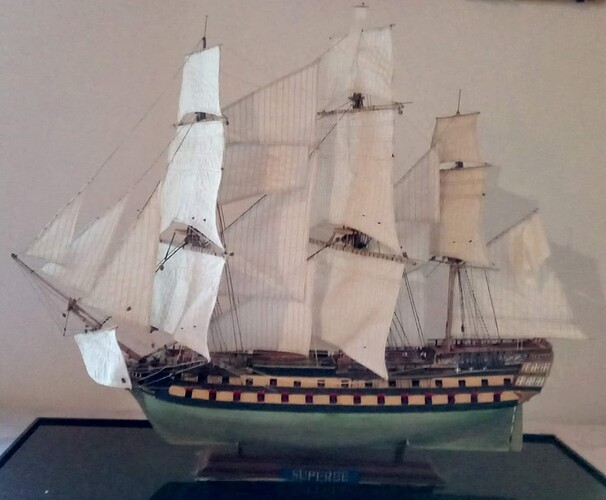 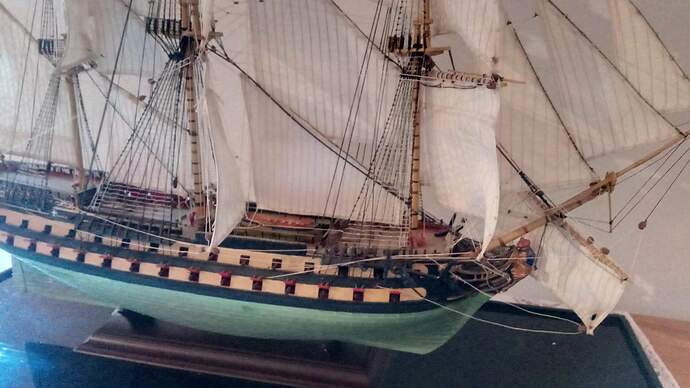 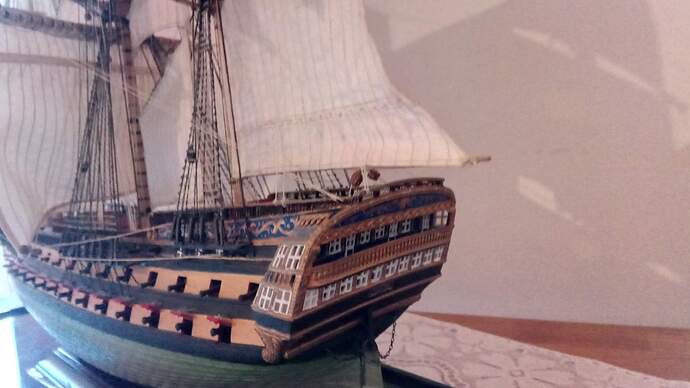 She is more than 25 years old, survived at least 5 house moves (two intercontinental) and is competely handpainted. Colors are not following the instruction but contemporary paintings and other original models. There is no picture or original model of her existing as far as I know as she had a comparably short career.
The sails were handmade, next time I would make them from silk paper. Its more to scale and easier to make.
If you have any questions about the ship or the kit just ask me

I don’t know if this will be my first and last big sailing ship, if it goes ok, I might be tempted by the old Revell 1/96th constitiution is ever rereleased, going a bit smaller the old airfix Wasa, but we will see. The sprue for the Black Seas Fleet 3rd rate do look very nice indeed, and not a bad price too.

I think it will make an interesting comparison to more modern vessels. Hope you enjoy the build if you take it forward