I’m building Mengs leopard 1 C2 Mexas. Great kit so far, the instructions call out clear blue for the vision blocks. Does anyone have a good up close picture of one? All the pictures I seen go be turning up show the blocks from far away or in heavy shade where they look black

So not quite the same but… 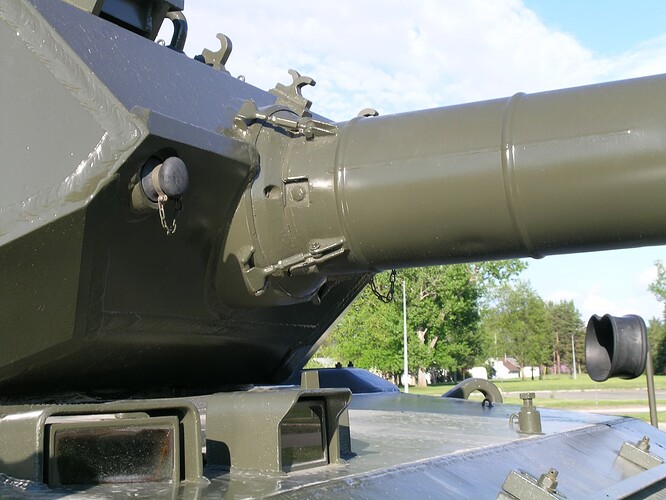 This is the 1A4 at the Borden museum. The blocks still look almost black because there isn’t any light behind them to show the colour of whatever the glass actually is. Clear smoke is probably a more realistic colour. I did blue over chrome on another build as an experiment and to see if the added colour dresses up the middle a little (a realist I am not). I’ve decided that while I’m not going to fix it, I’ll probably stick to smoke in the future. 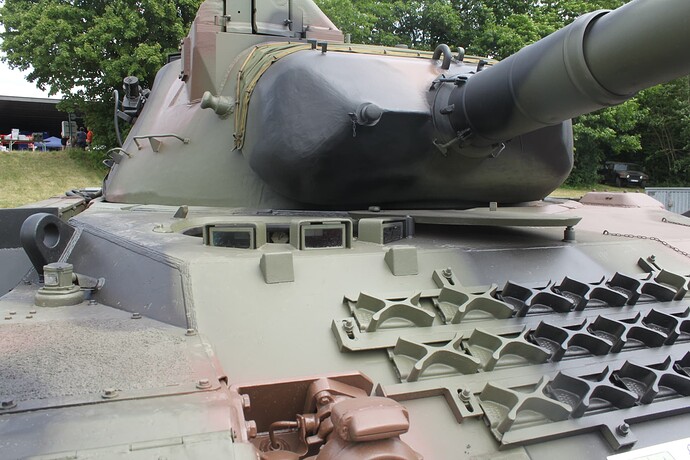 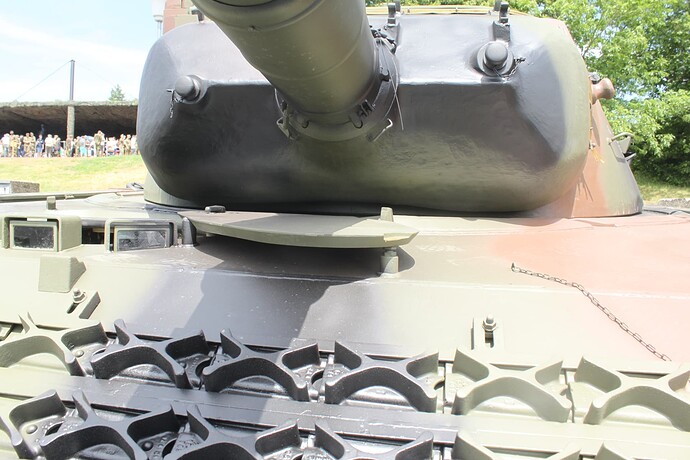 Hmm, a slightly blueish tint on the first photo

Blue, especially as show in many model kit instructions, is just wrong. The ballistic glass used in many direct vision systems has a green tint. A lot of modern stuff has a red anti-laser coating. Most periscopes, especially western/NATO are made from plexiglass/perspex and have very little glass in them, they mostly just look clear. When looking at them from the outside, because the interior is so dark, they look black.
On solid plastic periscopes I use gloss black. If they are molded in clear, I leave the lens clear and paint everything else black (overcoated with the appropriate vehicle color); this makes it dark but with some depth to it, like in the photos above. If needed, I add a light coat of clear green or smoke, just enough to give it a little bit of color. But never blue.
Ken

Good to know! I normally do similar on ww2 stuff. I’ll leave the lense clear and paint everything else in a aluminum color, then cover that with the vehicle color. This gives it some pop without looking cartoonish. This is my first modern vehicle so I thought I’d ask. I figured blue was wrong but wasn’t sure what to use in its place

I have one of those Leopard vision blocks, and it is definitely not blue. It has clear glass, I will try to take some pictures of it later.

I focus on small-scale subjects (1/72 and 1/76). For what it’s worth, I replicate vision blocks on tanks and AFVs by first applying a coat of very dark grey, usually Humbrol 67 (Tank Grey). This is followed by a coat of satin varnish, and finally graphite from the tip of a 2B pencil. The surround is then edged with the vehicle’s base colour to achieve a neat finish.
In the case of current tanks such as Abrams and Challenger 2, I tend to paint the lenses with various colours (red, yellow, purple, etc) to imitate the laser filters, and again apply the satin varnish.
A frequent mistake is to over-emphasise the lens colour; which often detracts from the overall appearance of the model.

Model companies have been instructing builders to paint optics blue since the 1970s, Tamiya even used to specify “royal blue”, whatever that is. I have never seen a blue one in real life.
Ken

Silver is better than blue. And the trick with graphite/pencil is good too.
Ken

I used Tamiya Clear Green on my Leo 1A4 a couple of years ago. I think that I had a gloss medium blue base color underneath. 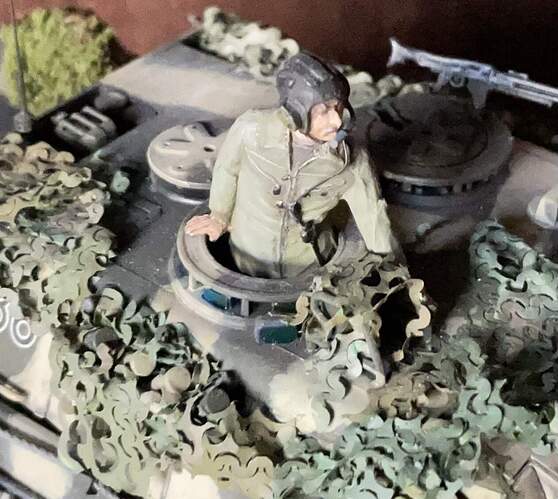 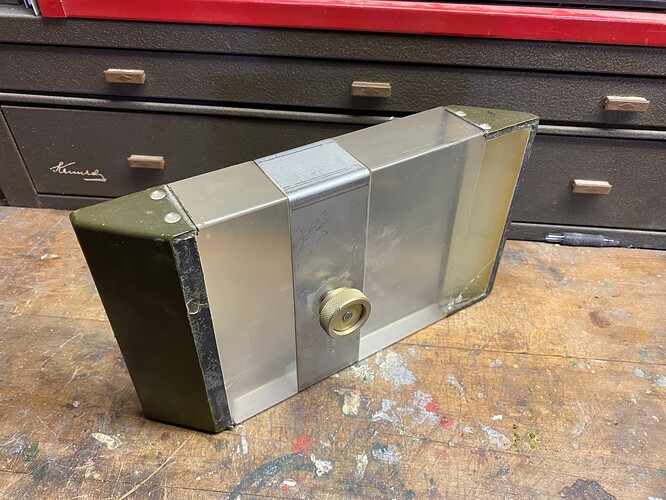 M1 drivers ‘scope, assuming the same & you may be able to catch a bit of the reddish coating. I would actually call it iridescent and can range red/blue/purple depending on the angle the light hits it. 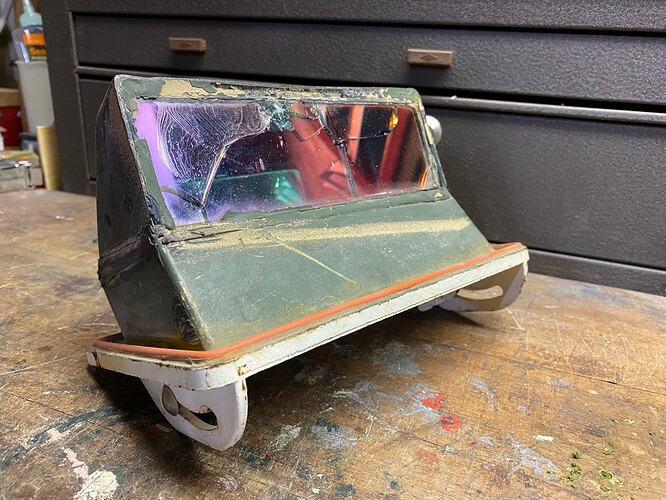 Soviet Mk.4 opened up. The upper head is hollow with just the mirror at the end, same as US WW 2 periscopes I’ve seen. 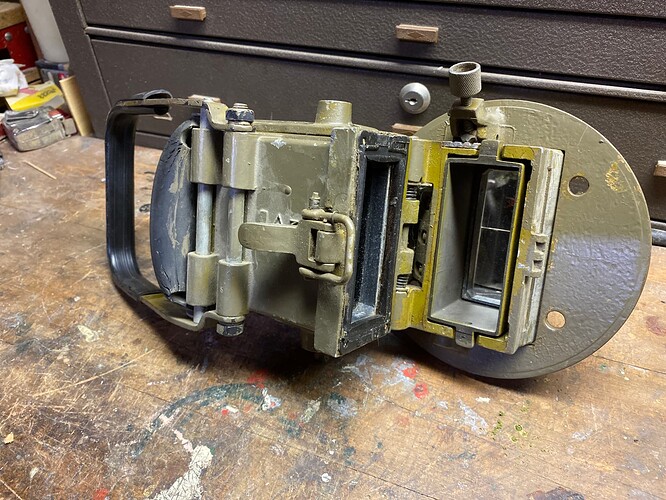